Skip to content
ANT-MAN And The WASP Quantumania Trailer Leak B...

I’ve always liked that the Ant-man movies show that no matter what size you are you can still get the girl. It’s something I relate to a lot…

Anyway, the little guy has made a big impact and Ant-man And The Wasp Quantumania has the potential to be one of the biggest or smallest movies in Phase 5.

Kevin Feige announced at San Diego comic-con that this will be the first film in the phase and we know from the trailer leak that it’ll introduce Kang The Conquerer.

He was of course by He Who Remains at the end of Loki and there’s been a lot of chatter online after the event about how good Johnathan Majors is. What’s interesting about Kang is that there are so many different versions of him in the Marvel Universe. Whether it’s Rama Tut, Immortus, Victor Timely, Iron-Lad or whoever, you never know which version of Kang you’re gonna get. There are an infinite number of him across the multiverse, the majority of which can move throughout the multiverse and therefore every time a character runs into him it’s a roll of the dice.

Now Phase 6 will end with two Avengers movies in the same year both of which will centre around Kang and his Dynasty.

So lots of things are gonna be happening in Quantumania that will have big repercussions and the first look gives some major things away.

Now, either you’ve seen people filming the ceiling of the event of it on Twitter or you’ve heard people talking about what happens in it.

Either way we’re gonna be breaking down everything that we know about it and going through some of the major things that people learned from the first look.

Quantumania will heavily feature Kang and this is going to be made clear from the off. According to people at the event, he narrates the new look from the beginning and throughout it, we hear him saying.

“You’re an interesting man, Scott Lang. You’ve lost a lot of time. But time! it is not what you think. It’s not a straight line. When you can see the time, the way I do, you can see everything”

Now, this is of course referring to Scott getting lost in the Quantum Realm after the events of Ant-Man and The Wasp. Though to him it only felt like a handful of hours, the real world had 5 years go by and because of this his daughter aged from a kid up to a teen.

We know from the poster that Cassie Lang will be returning for the movie and though she’s now played by Kathryn Newton, she’ll be a very big part of the adventure. The first poster for the film shows her in a purple suit and she’ll likely be becoming the character Stinger. In the comics, she was also called Stature at one point but I think they’ll probably just jump straight to Stinger as it fits in better with the bug personas that the rest of the squad have. 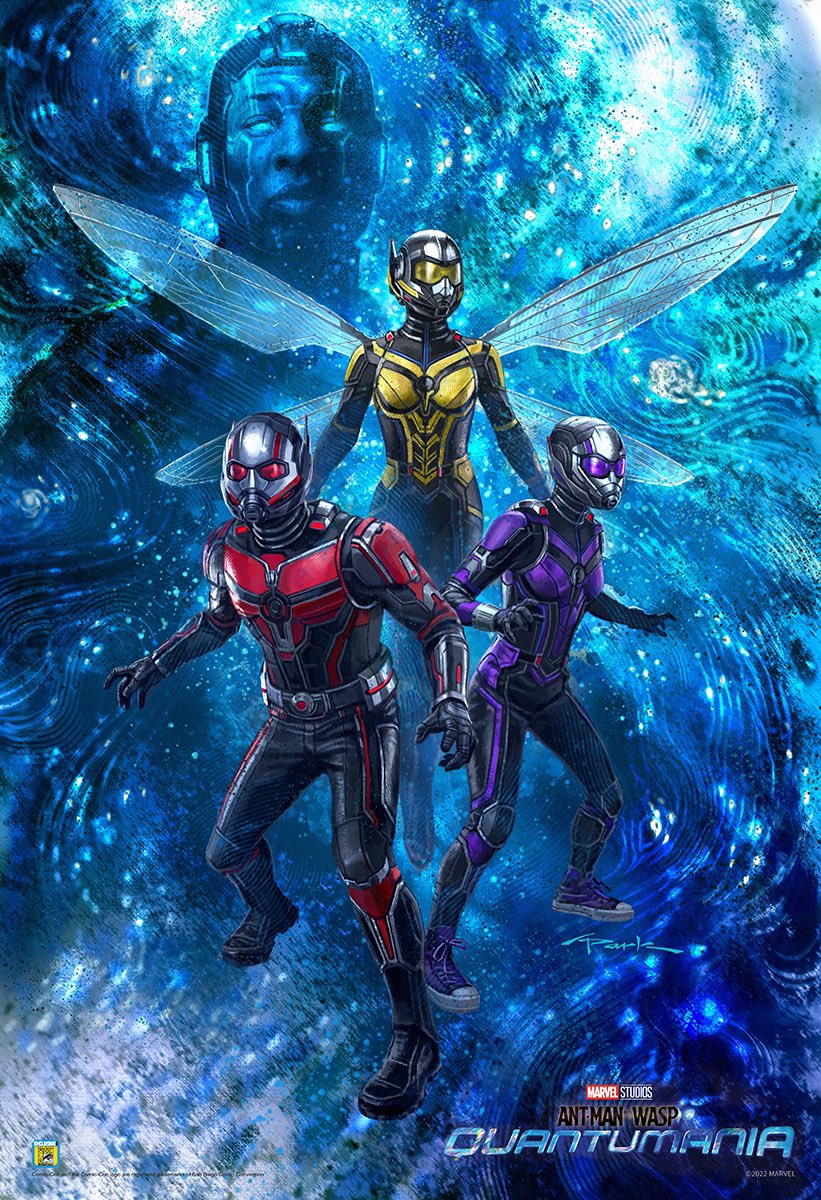 From what my uncle could make out from watching the dodgy clip on Twitter there is a tiny blue beacon that opens up in the lab one and Cassie gets sucked into this along with the rest of the characters.

It seems like they’re experimenting on the Quantum Realm and whether Cassie opens this up accidentally or this just caught them off guard remains to be seen.

I guess that they’re all taken there including Janet who will likely help them to navigate the dimension. This can slightly be seen in the trailer and Janet ends up donning the hooded costume that she had on in Ant-Man and the Wasp when Hank was reunited with her.

We don’t know exactly what she got up to when she was down there but it seems like she found refuge in Kang’s city which existed in the dimension.

Janet seems to be the age that she would’ve been on Earth and we saw with Scott that the area he was in had time moving differently. So Janet likely found refuge for the 30-odd years she was down there and just chilled out watching Heavy Spoilers’ amazing videos.

Now according to people at the event, there is a point in it where we see the group all journeying there and it’s filled with humanoids that have markings on their faces. There’s also the Kang suit from the comics which has the classic purple helmet with a blue face covering.

In the source material, his skin was blue but it looks like they’re using it as a suit here that he uses to travel through the quantum realm.

There are apparently a lot of different looks for Kang in the teaser with some even having his mask off. These could be the same version of Kang or as we’ve discussed different iterations of him from different timelines.

It’s even possible that we saw this location in Ant-Man and The Wasp and if Janet found refuge here then she could be used as a way to give some exposition on who Kang is. Now though this happened before the events of Loki when the timeline was split, time moves differently in the Quantum realm so you can have things happening there after the end of time which is when the ending of Loki took place.

Look it’s a lot of timey wimey wibbly wobbly stuff but either way, Kang has encountered the Avengers before or at least versions of them.

In the teasers, Scott says to him “I don’t know who you are, but you have made a big mistake. I am an Avenger!”

Teaming up with Modok

It’s pretty wild and it instantly sets up Kang as a threat that’s not to be f**ked with.

Whereas Thanos wiped out trillions of people with a snap of his fingers Kang has conquered countless timelines and in some instances killed far more than Thanos ever could. He wiped out everyone that ever was and everyone who ever would be in those ones and it’s all in his quest for domination.

Now it looks like he’s also going to be joined by the villain Modok.

According to rumours about the film, he will be played by Correy Stoll who played Darren Cross in the first Ant-Man film.

You’ll probably remember that he ended up getting stuck into the quantum realm himself and he likely got picked up by Kang and drafted into his forces.

Originally in the comics, Modok was a character called George Tarleton but it looks like they’ve changed things up here and honestly, I think it works better with the story. We don’t really need a big origin breakdown during the movie if he’s simply Cross. So Cross that off your list you stupid bitch.

His design has slightly been changed up and he’s now more like a cyborg rather than a giant human head.

Other miscellaneous things that happen are that we see Bill Murray at one point taking his glasses off. We don’t know which character he is yet and as of now, we don’t know anything about him beyond him seemingly knowing Janet.

Now there are rumours that he’s playing Krylar, a character who popped up in The Incredible Hulk Issue 156. Krylar was introduced and killed in the same issue so there’s very little to go off with him. However, he did live in the Micro-Verse so he’ll likely be someone who lives in the Quantum Realm under Kang’s command. Marvel doesn’t actually own the rights to use the word Micro-Verse, hence the change to Quantum Realm though I would’ve loved the name Micro-verse-a-mania.

Either way, he does seem to know Janet so maybe he was a love interest whilst she was down there which would make things a bit awkward with Hank.

Don’t quote me on that though cos it might be wrong and I judged it…sorry I mean my uncle judged it off watching the corner of a video filmed on a phone.

Murray’s character has glasses on, which he takes off and we could see in the first look that he looks human. So whether it’s him or they did a different design we don’t know. Moon Knight did something similar too where they took a very obscure character in Arthur Harrow and it just means that they can really do what they want with him whilst still giving a little nod to the comics.

Murray has kept tight-lipped about it too and when asked about the project he said that he doesn’t normally do movies like this but he simply just liked Peyton Reed and got on with him.

Catching Up with Scott

A couple of cute shots that we get in the trailer also centre around Scott reading his own book out at a reading event. The character of course read a lot after the events of Civil War when he was under house arrest and he’s now become somewhat of a celebrity. The book is titled Look Out For The Little Guy and it’ll also compliment his podcast which was brought up during Ms Marvel.

Apparently, this has turned him into a bit of a celebrity and instead of staying a hero he’s been out of action and has focused on this for a while. We actually see him and Hope at a premiere at one point and he’s carved out a big name for himself. Got a lot of The Boys vibes watching it and hopefully he has better luck in the bedroom than Termite does.

He then gets a call from jail and after picking it up he’s connected to Cassie. She’s sort of doing what he used to do and breaking the law but for the right reasons. However, he doesn’t want her to waste her life behind bars as he did. He brings up saving the world again which Hank calls him out for as he apparently always does it. Now, this has created a gap between the pair and at the moment they have a strained relationship due to his constant need to brag.

What Could Be Coming for Scott?

I think because of this that the movie is gonna be about humbling Scott on several levels. Time to make that ego shrink down too and we’re not only gonna have his daughter taking him down a peg or two but also Kang. I really think that Kang is going to wipe the floor with him in this movie and that it’ll end with him losing which will set him up as a major threat.

Scott will probably get a win against Modok but Kang has all the angles covered and can probably beat him on several levels.

Beating the guy who saved the entire world, wowza, what a bloody victory but I think it’s definitely gonna set the stage for how dangerous that Kang is. I originally thought the movie might be some goofy trip through the Quantum realm but it now sounds like it’s going to be extremely important. The Ant-Man movies have always been sort of wildcards in MCU and though they’re mainly comedies they do have their big moments and even a lot of stuff that had big ramifications in Avengers Endgame.

It’s all building to Kang Dynasty and Secret Wars which we now know will be directed by Destin Daniel Cretton.

He’s coming hot off the heels of Shang-Chi and it’s gonna be interesting to see what the director does with it.

Anyway from what my uncle could make out, the trailer looks really good and I am excited to see where they take things.

I’d love to hear what you hope to see in the movie and from Kang so make sure you comment below and let me know.