Skip to content
GUARDIANS Of The Galaxy Volume 3 Trailer Leak B...

After it was shown at San Diego Comic-con over the weekend, footage of the Guardians of the Galaxy 3 trailer leaked onto Twitter after being a Hall H exclusive.

Director James Gunn said that the trailer has all the shots in place but that he doesn’t want it released to the public yet because it has unfinished VFX in it. Gunn took to Twitter and said that being shown once to a live audience means that they can’t pick it apart as they would online and thus the best look we have of it at the moment comes from my uncle sitting and film…sorry your uncle sitting and filming the event.

Throughout this post, we’re going to be breaking down what happens in it, the new characters that appear and also what the plot of the movie will centre around.

Due to Disney firing James Gunn, there was a big issue with the production of this movie. The cast came together and put out a message in an attempt to get him rehired but Gunn ended up going over to DC to film Suicide Squad. Disney was unable to find a director to fill his shoes and after Taika Waititi turned them down, they ended up bringing Gunn back to complete the film.

This had severe consequences on the production and originally this was supposed to release before Thor Love And Thunder with it picking up after the events of Avengers Endgame. However, Love And Thunder somewhat dealt with the Guardians though, whether it worked is completely dependent on your opinion of the film.

They ended up leaving Thor and the upcoming film is going to be centred around them continuing the search for Gamora, who returns in this new teaser. From what your uncle could gather the first look opens with the Guardians onboard the Benatar. This is the same crew that was in Thor Love And Thunder and they may be just coming off of leaving The God Of Thunder behind for the events of that movie. We see a shot of Nebula from behind and electricity sparks up throughout the ship.

Peter says “Ah Hell, Ravagers” and we then cut to a wide shot of their ship flying close up to the Benatar. According to people at the event, this meeting was set up in advance but it’s something that Quill wasn’t privy to.

They pull their guns on Peter and Nebula rushes forward and says “we have an appointment.”

There’s a big surprise when Gamora steps forward and we discover that she’s now the person leading the Ravagers.

How is Gamora Back?

Now how Nebula set this up I’m guessing is because she and her sister ended up standing side by side with each other during the events of the final battle in Avengers Endgame. There was actually a deleted scene where we saw Gamora going off but I’m guessing they kept this out of the movie so that there was some mystery over whether she got dusted along with Thanos’ forces.

There is a possibility that the pair kept a way to contact one another but let me know your thoughts on it below.

Gamora says you’re early and we get a long hold on Quill’s jaw dropping as she steps forward looking sexy, got that whole sexy green should’ve done She-Hulk like this look to her.

Now from here, we cut to the Marvel Studios logo and over the top of this, we can hear the song Do You Realize by The Flaming Lips.

This song is a fitting choice too as it has lyrics like: 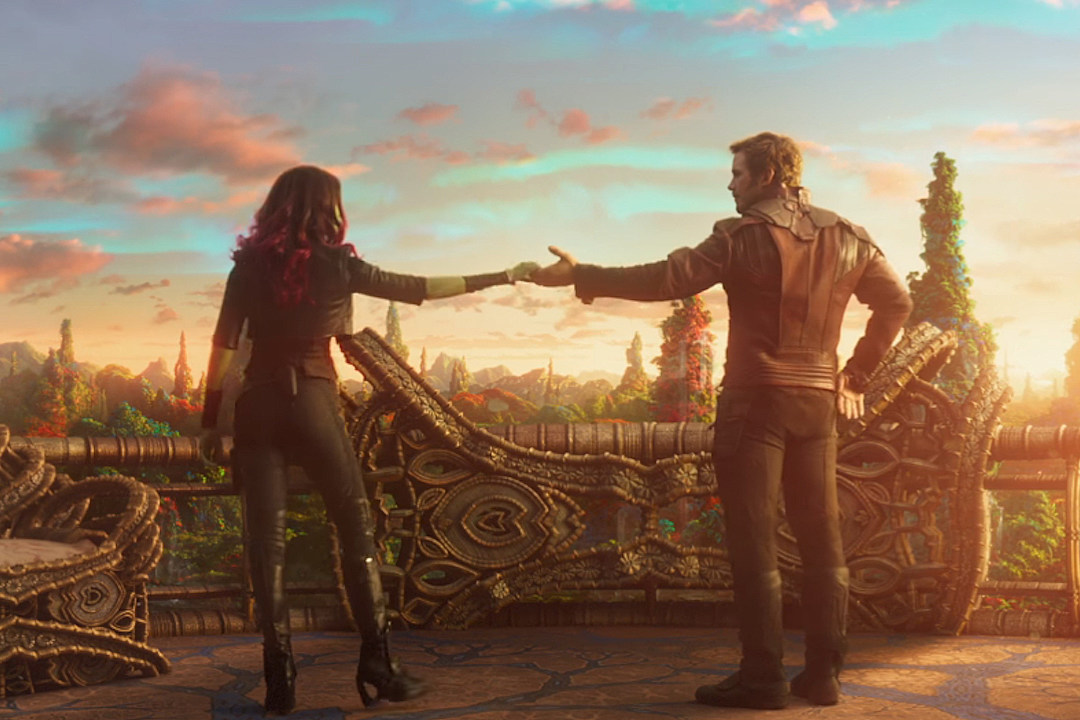 This is accompanied by shots of the original Gamora from the original timeline and snippets of her relationship with Peter. It’s done in a very similar way to the Jane montage in Thor Love And Thunder and she spins around into his arms similar to the dance scene in the first Guardians film. Peter says ‘you were everything to me’ but this is shot down by Ravager Gamora who says that person wasn’t me. She’s holding a polaroid picture in her hand and I’m guessing that Quill was trying to convince her to love him.

We also have cuts of the pair wearing what look like astronaut helmets and they’re on a planet with very low gravity. There’s a team with them who are all in colourful suits and it reminded me a lot of the ones from the first JJ Abrahams Star Trek movie.

Now speaking of suits, we also know that the Guardians are going to be wearing their comic book accurate costumes. At one point we see Peter wearing the red and blue uniform and later on the rest of the guardians wear this. This includes Drax which will hopefully protect his very very sensitive nipples.

We also get clips, where Mantis does a little dance and Nebula sees a large neon sign in an unknown Alien Language that, I’m not really sure what it is.

Now next we get a shot of a baby racoon that cowers in terror as a hand goes towards it. This is obviously a young Rocket and the hand likely belongs to the villain of the movie, The High Evolutionary.

In case you don’t know who he is, this is a character called Herbert Wyndham who was born on Earth, namely Manchester.

After debuting in The Mighty Thor issue 133 Herbert took an interest in the work of Nathanial Essex aka Mr Sinister.

He started carrying out genetic experiments and he even built a device known as a genetic accelerator that sped up the evolution process. He used this on rats to advance their intelligence even though, that’s not really how evolution works but never mind.

What do you mean how does it work?

Well a rat, is as evolved as you are. 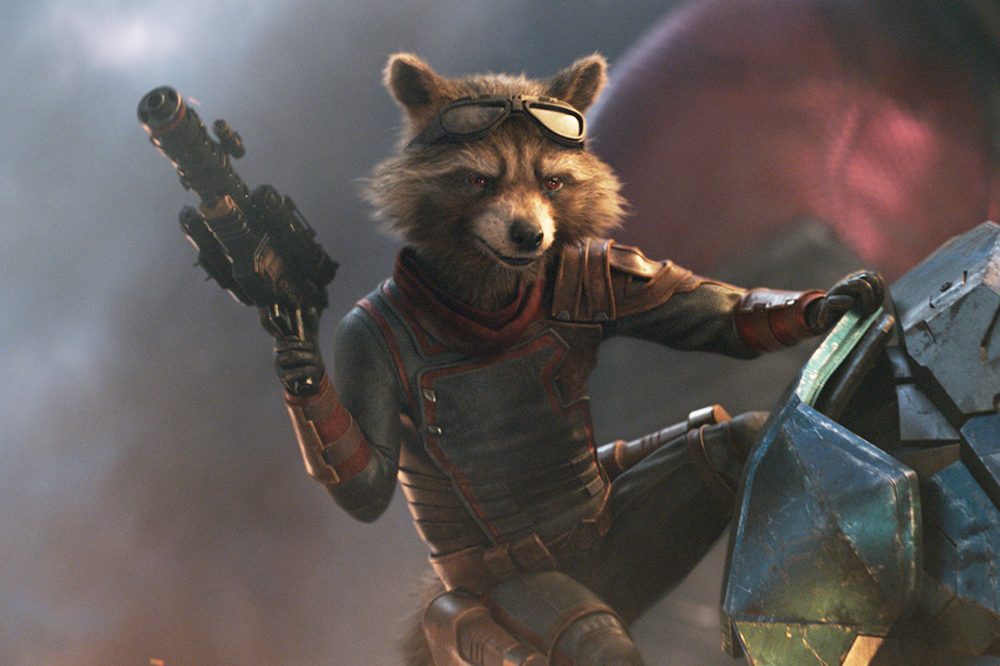 But moving on, he slowly started to experiment on animals and at one point he even mixed a dalmation with a chimpanzee to create a dog humanoid. I’m guessing that this will be pulled across to the movie as we know that Maria Bakalova is voicing Cosmo the space dog and this will likely have been experimented on by the High Evolutionary.

He of course made Rocket into what he is and we’ll likely discover his backstory with the villain.

We’re unsure what he’s after at the moment but I guess that he potentially wants Rocket back after a string of failures. Rocket is one of a kind and possibly he holds the key as to how he can create more like him. Now sadly I actually think that Rocket may end up even dying in this movie. He doesn’t have a very long life span and with this being centred around his birth we could also get his death too.

Either way, it’s gonna be horrific watching him getting cut apart and there are shots in the teaser of saws and tools that the villain uses.

Now speaking of origins we also get a shot of a neighbourhood on Earth and it’s possible that Quill could end up returning there once more. Perhaps he will come face to face with the family that he left behind after he was kidnapped by Yondu and he might finally confront the death of his mother.

There’s always a lot of chatter around the other films as to why Quill never really went back to Earth and why he also left as quick as he could after the events of Endgame. You have to remember that this is a place of great trauma for him and just like how you probably wouldn’t be too eager to return to somewhere one of your relatives died, he isn’t either.

Now we also get a shot of Will Poulter as Adam Warlock. We last left him being created at the end of Guardians Volume 2 and in case you don’t know, this is a character who was massively tied to the Infinity Stones. Normally he was a big adversary of Thanos but with the villain being dead in the main timeline it’s gonna be interesting to see what they do with him. He was also a major ally of Pip the troll who we were introduced to at the end of the Eternals.

He has major ties to the High Evolutionary and he’s the character that gave him the name Warlock. It’s even possible that he starts off working alongside him at the beginning of the movie and then he slowly ends up joining the guardians as he realises how bad his boss is.

Don’t quote me on that just I can see the High Evolutionary having minions.

He could also just be working for the Sovereign who we saw created him at the end of the last Guardians movie.

There’s also a shot of the monster from the start of that film and we get a moment in which Peter and Groot stand back to back firing guns.

Moments like this have been seen throughout the Guardians films at several points and it’s important to bear in mind that Groot is fully grown at this point.

When we last left him he was a teen but he’s gonna be full size for this film.

Now James Gunn has said that characters will die but not the entire squad. He said just because it’s an ending doesn’t mean that everyone will but expect to see some of your favourite characters go out in this movie.

Along with Rocket, I’m expecting Drax to go too due to Dave Bautista confirming that this will be the last time he plays the part.

His family of course was killed by Ronan/Thanos and with them both now being dead it makes sense that this might be his last film. The MCU recently has had a big focus on the afterlife so I am expecting him to potentially go out in this movie. 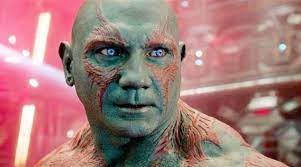 Now from what I co…sorry your uncle could see in this trailer, it looked like a really emotional journey for the team and I’m really excited to see what happens in the movie.

It could end up being the best of the trilogy and so far I think that Gunn has knocked it out of the park on all the comic book stuff he’s worked on.

Gonna be really interesting to see where they go with it and obviously let me know your thoughts below on what you wanna see in the movie.