Skip to content
I AM GROOT Breakdown | Easter Eggs, Things You ...

I am Groot sees the titular character branch out into his own animated series set in the MCU. It’s filled with some cool cameos and little easter eggs that we’re gonna be breaking down throughout this video.

If you don’t want any spoilers then I suggest you leaf now.

Now it was said that this series takes place between the ending of Guardians Of The Galaxy Volume 2’s final scene and its post-credits one. This was confirmed by the creative team though the second entry clearly takes place right after the first movie.

Each episode begins with Groot fast-forwarding his way through the classic Marvel Studios fanfare. I respect that Disney heard our complaints about their shows having 10 minutes of credit scenes and they cut them down to reveal the true length of each entry…I’m just kidding but the first episode is called Hot Spring Bird.

This shares the name with the 2017 I am Groot comic about the character being stuck on a planet called Terminal. I’m guessing this is the tropical one that we join the character on. The source material did have him away from the Guardians but here we can catch the Benatar perched up on a hill. The art style of the comic fully pulls across to the new series and the logo and text at the end look similar to how it’s presented in the source material.

The first entry follows the little guy as he finds a hot spring inside a puddle, the mud of which gets mixed with a flying insect and also some fruit. It’s very much like a little spa for him and he even dons some cucumbers on the eyes like your uncle Kevin Spoilers when he gets a break from the kids for a day.

This lets him grow his leaves rapidly and he ends up styling it in a sort of getting dressed montage that was a staple of 80s movies and also Wonder Woman.

Guy transforms from a chia pet into a Centaur, Poodle, Dolphin and an 18th Century lady.

Guessing most of the people watching this are under 10 so you probably don’t get that reference, also I think Little Britain is probably cancelled now.

Either way, Groot takes the fur from a multi-coloured animal and wears it as a scarf, cementing this as being the best spa day ever.

Next, we cut to Bonsai Tree which as mentioned earlier, seems to pick up right after the end of Guardians Of The Galaxy.

That had him dancing to Want you Back by the Jackson 5 and here we watch as he grows from a twig into his baby persona.

Now the ship is filled with references to the other films and beside him, we can catch a little fruit. This is the same as the one that Nebula was constantly trying to get to in the second film and upon biting it she discovered it wasn’t ripe.

Now he’s watered and grown by two torture-probe-looking things but it’s all good as he gets to eat some cheese puffs in his little pot. Guardians 2 had him eating junk food at certain points so it’s nice that he developed his diet of garbage early on.

After he cracks the pot he’s shifted over to the other side of the room and behind him, we can catch the cassette deck that Peter Popped the awesome mix volume 2 into. The tape looks exactly the same as how it did in that movie but just wait until you hear about Limewire, baby.

Groot is replaced by the Bonsai and the word actually translates literally to mean tree in a pot.

As he swings we hear the song Blue Danube playing and this was featured in 2001 a Space Odyssey during the low gravity scenes of that movie. They also have a riff that sounds similar to the main title theme from that movie.

This piece by Richard Strauss was titled Sun Rise and it helped to cement the message of humanity’s evolution from crawling out of the dirt which Groot literally does. He takes his first few steps, says I am Groot and also makes peace with his fallen tree brother whilst he eats some cheese puffs.

Next, we cut to short number 3 which is titled Dancing.

Groot wakes up on the Ravager Ship which I believe is called the Eclector.

This belonged to the gang and it was stolen by Rocket, Yondu and Groot during the second movie.

He ends up coming across a box of smartwatches and using one of these as a headlight he finds a mysterious vial that’s been broken open.

As he walks through the dark corridor there are a lot of vibes of both Alien and Aliens the latter of which was directed by James Cameron. I feel like Cameron gets another nod in this entry when Groot finally comes across the creature that escaped. Not only does it move and shape shift like the T-1000 but it’s also very similar to the water creatures in the abyss and how they move and change shapes.

Love that they pay homage to some of the first major special CGI effects and this series shows how far animation has come.

Groot reads a book on the toilet and on this, we can see Thanos as well as some little white fluffy aliens. These are known as Vyloos and they too appeared in Guardians 2. They also show up at the beginning of the fifth short when it attacks the treehouse that Groot builds.

He searches for the creature in a Russian doll and he also jumps on a purple banana which too appeared on the cover of the book. James Gunn is also credited as lending his voice to the wristwatch.

Now if there’s one thing that Groot learned from Peter at the end of Guardians is that sometimes you gotta have a dance-off, bro. Just as he busted the moves out on Ronan, here Groot goes against the creature in a scene that’s very reminiscent of Shadow Mario.

The pair go face to face with Ran Kan Kan by Tito Puente and Groot blasts him out of the airlock.

This again is probably referencing Aliens namely how Ripley took the Queen out in that film which is a nice tying together of the whole thing.

Cut to episode 4 and we watch Groot wake up on the Ravager ship once more with the song You Can Get It If You Really Want playing.

We see he has a Jansport backpack and this has a NASA badge on it as well as the ghosts from Pacman.

The backpack itself actually belonged to Peter and this is what he was wearing at the start of Guardians of the Galaxy when he was picked up by Yondu.

This is filled with a lot of references to Earth and the 80s including an Alf Comic.

Standing for Alien Life Form this sitcom followed an alien that crash landed on earth and lived with a family.

It was satirised in the recent movie Nope and the monkey in that was called Gordy with Alf’s true name being Gordon.

You probably haven’t seen that as like I said, you’re 10…unless you’re actually 30 in which case, what you watching I am Groot for.

Now we follow Groot in a scene that’s sort of similar to the one in the second film where he steals all kinds of items from the Ravager crew. He cuts off some of Rocket’s fur which he later uses on a family picture that he draws and he also steals some soap from Drax.

At least I think it’s Drax..I couldn’t see anyone there because whoever it was was moving so slowly that it was almost like they were invisible.

He also grabs some annulax batteries which appeared at the start of Guardians 2.

Along with these Arbulary Batteries we also see the cheese puff packet from the bonsai tree episode and next to it is the cracked plant pot that also showed up in that.

Using the Alf cover, he creates a canvas and he cooks this with a rocket boot. This belonged to Star-lord and it’s something that he used to fly around with during the end of the second film. In a further tie back to that we see that Groot has learned how to press the big red button which he had trouble with in the bomb scene from that movie.

He blows a hole in the ship and we get an appearance by Rocket. He wears some little eyeglasses that I don’t think we’ve seen him put on before and almost gets sucked out. The picture has the family on there including Gamora who looks a bit like She-Hulk. There’s also Peter who has his walkman. It’s a nice little family photo. 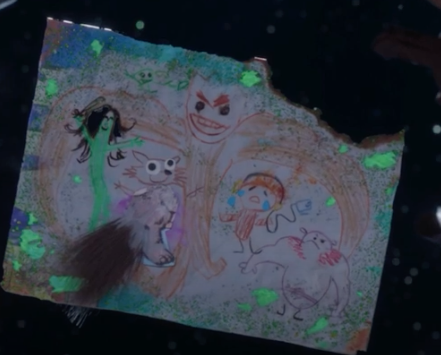 We follow Groot as he makes a tree house for himself but this is brought down by a Vyloss which we see in the opening shot sitting on a tree branch.

This is taken out by a bird which leads to Groot discovering some tiny lie forms under a rock.

The musical stings here once more mimic 2001 a Space Odyssey.-

There are also flashes of in the Hall Of The Mountain King as well or as I call it the Alton Towers theme tune.

He farts out a leaf and then we get some Pikmin vibes as we watch the little people feasting on it. They all look so happy including this old woman who cries but Groot steps on them as he races back with some branches.

However, they’re all good baby and that ends the episode.

So yeah, some nice little easter eggs in there. Doubt I’d watch this again but it’s one for the kids and I know it’s something I can just put on tv and let my two little lads watch on loop whilst I make my 3rd video of the day. It’s what a true father would do.

I think the animation was great and though the series was pretty much all filler I get that I’m not really the target audience and there are probably people out there who’ll have fun with this a lot more than I did.