Skip to content
Every Hidden SPIDERMAN In The No Way Home Trail...

Ok, so the brand new Spider-Man No Way Home Trailer has some pretty wild easter eggs in it. Whilst it didn’t end the debate over whether Tobey Maguire and Andrew Garfield are in the movie there were lots of hints and mistakes in it that hinted at them being there.

Marvel trailers are famous for misleading people and even in Spider-man ones we’ve seen how costumes have been switched out for the final cuts. This trailer is no different and originally when moments from this movie were shown in Empire magazine we saw Tom Holland wearing the red and black suit, only to now learn that he’ll be wearing the integrated one.

Plus that Tom Holland reaction to it kinda gave away that things were missing.

Where’s the? Yeah, you better not finish that sentence you little punk.

Now in the new look, there are several special effects that stand out like a sore thumb and it has the entire trailer looking like this at points.

Throughout this video, we’re gonna be breaking down each of the special effects that could confirm Andrew and Tobey are in the film as well as some of the cool easter eggs that we’ve noticed since watching the trailer for the 900th time. 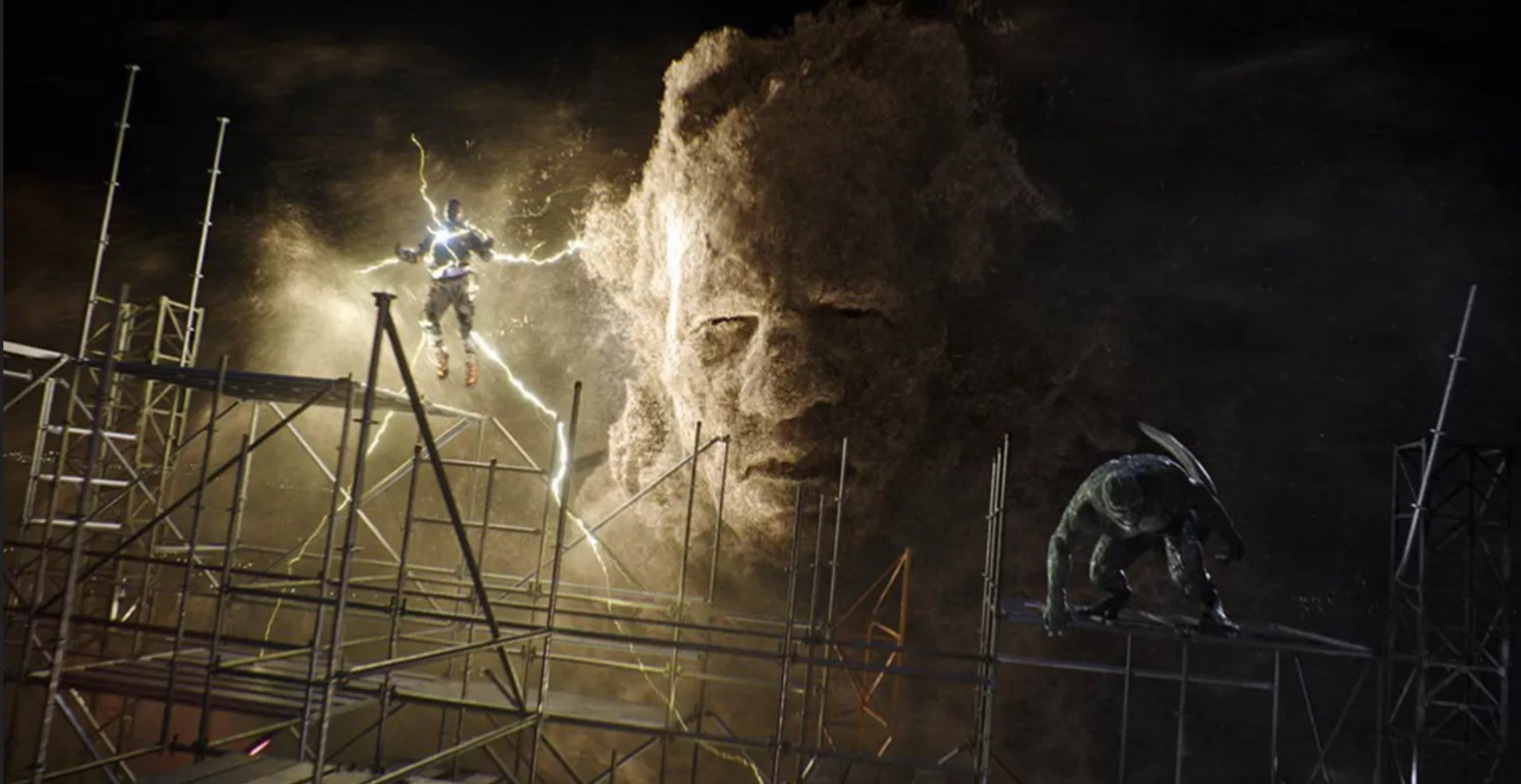 Swing and a Miss

Now the biggest indicator comes in a shot that I’m sure you’ve seen all over the internet at this point and this moment happens when Tom Hollands Spider-man leaps towards Electro, Sandman and The Lizard.

Though the English cuts of the trailer cut out before anything was revealed, the Brazilian version has a moment in it in which the Lizard gets kicked in the face by an invisible force. Whilst this could be Ant-Man or John Cena what’s likely going on here is that they removed one of the Spider-men from the scene and if I had to hazard a guess I’d say that this is Andrew Garfield.

Garfield and the Lizard had a rivalry in the first Amazing Spider-man movie and therefore it just makes sense that he’d be the one taking on the villain.

Now because of this, we can also guess that Tom Holland and Andrew won’t be facing off against three villains themselves and if you look at the way that the shot is set up it seems like the bad guys are going towards their own targets.

Typically in films when you have a final showdown you get the same amount of villains as there are heroes so that you can have people facing off against their counterparts.

Personally, I think that the Tom Holland Spider-man that we see is actually Tobey Maguire and he will be leaping towards Sandman.

Though we can’t see who Electro is heading towards I would imagine that this is Tom Hollands version and then everyone is going head to head against someone. Sure Electro and Andrew Garfield also have a history but they have changed up the design for Jamie Foxx whereas the others remain the same as their original films. I think that this has kinda been done for the reason that he’s very much an MCU version from an alternate universe whereas the Lizard and Sandman could be from films that we’ve already seen.

If you look at other parts in the trailer it also looks like Electro is fighting someone off-screen as he doesn’t chase after Tom Holland even though he would if he was the only Spider-man.

Now shoutouts Erik Voss at New Rockstars for pointing out that there’s a moment in which a piece of caps shield actually warps as if someone is jumping off it. Potentially this could be another spider-man and the VFX artist didn’t erase the bend and warping motion that the shield had.

Now another interesting mistake seems to happen just as MJ falls backwards off the scaffolding. Though Ned reaches out to her there also seems to be a ghostly arm on the left-hand side of the shot that appears. It almost seems like this has a body attached to it that has been erased through VFX and whoever did it better start applying for jobs and a new identity come Monday because Kevin Feige doesn’t miss.

Now for the next part of the video, I will be showing some of the apparently leaked footage of Andrew Garfield so if you’ve managed to avoid this then well done on missing one of the biggest spoilers on the web but I will find you and I will kill you.

Also if you’re enjoying the video so far I’d massively appreciate the thumbs up and make sure you subscribe for breakdowns like this every day.

If you’re new then welcome to the Heavy Spoilers show, I’m your host Paul aka your friendly neighbourhood spoiler-man now let’s get into the rest of the video.

Ok so earlier in the year there was some leaked footage released that apparently showed Andrew Garfield gripping some scaffolding similar to what we see in this shot. If you saw the leaked images that John Campea posted you’ll also know that scaffolding played a big part in that too so it seems like the leaks are indeed true now we’ve seen this trailer.

I would actually love it if these scenes were stitched together and after Andrew appeared here he then jumped to save MJ along with Tom Holland. If you cast your mind back to the Amazing Spider-man 2, his biggest failure was letting the love of his life die and if he helped to save her then this would redeem Gwen Stacy’s death.

The shots are so similar and not only do the moments line up with Tom Holland’s worst nightmare in Far From Home but they also callback to the death of Andrew’s love.

So I think at this moment that it just makes sense for Andrew to swoop in and this is a very popular fan theory at the moment. I’d actually love for him to travel to a universe where she didn’t die at the end of the movie and he could kinda get a second chance like Steve Rogers.

I’ve boosted the brightness on this shot too and through doing that though it does lose some of the colours you can kinda make out that it’s an arm with a hand and fingers. Other possibilities are that it’s just a rope with knots in it and many have said that it’s actually just one used in construction situations.

Now another moment that makes it seem like they switched out the costumes happens for a split second in the trailer when we watch Spider-man swinging through the construction site.

The eyes on the mask look exactly like Tobey Maguire’s mask and if we look at this in another shot you can see how different they look. One has angles and a more rigid design whereas the other doesn’t so I’d be surprised if this isn’t actually Tobey Maguire.

Now as for the other easter eggs that have been found since you might have noticed that when Spider-man goes to tackle Electro that you can actually make out that Ned and MJ are playing on a screen on his chest. I dunno if this is a hologram or a screen attached to him but I actually think that it might be a phone and that Peter is currently face-timing them. I love how it’s sort of tied back to Ned being the guy in the chair and it’s awesome that they’re gonna be watching the fight play out too.

If you look closely you can actually see that there’s duct tape on his suit holding this in place and this is of course also used by electrical engineers quite a lot.

You might also catch that there’s actually wires sticking out the suit as well and this might be because he’s outfitted the suit so that Electro can’t damage him. This actually happened in the comics as well and Peter built a special suit for fighting his electrical enemy so I’d love to see that brought across here.

Electro also has an arc reactor on his chest and shoutouts to Cris from 3c films for pointing that out, even though I hate that summoffabitch.

Now since the trailer’s release, we’ve also had a TV spot dropped that shows more of the moment that Doctor Strange Portals peter. I absolutely love how he makes the wallcrawler use his own webs and he pretty much portal’d that mother f**ker.

Strange then pulls him in and pushes him so hard that he astral projects out of his body which is of course a move that we saw the ancient one pull on Strange and also Hulk in Avengers Endgame.

Peter says that it’s one of the coolest things that ever happened to him but that he shouldn’t ever do it again.

I kinda have a theory that the way Peter is able to escape from this has to do with his Spider-sense and as this makes his body react automatically sometimes he’s able to escape the hold and still move.

Peter often does this off instinct alone and just by reacting so I think that would make sense as to why Strange lets him go. 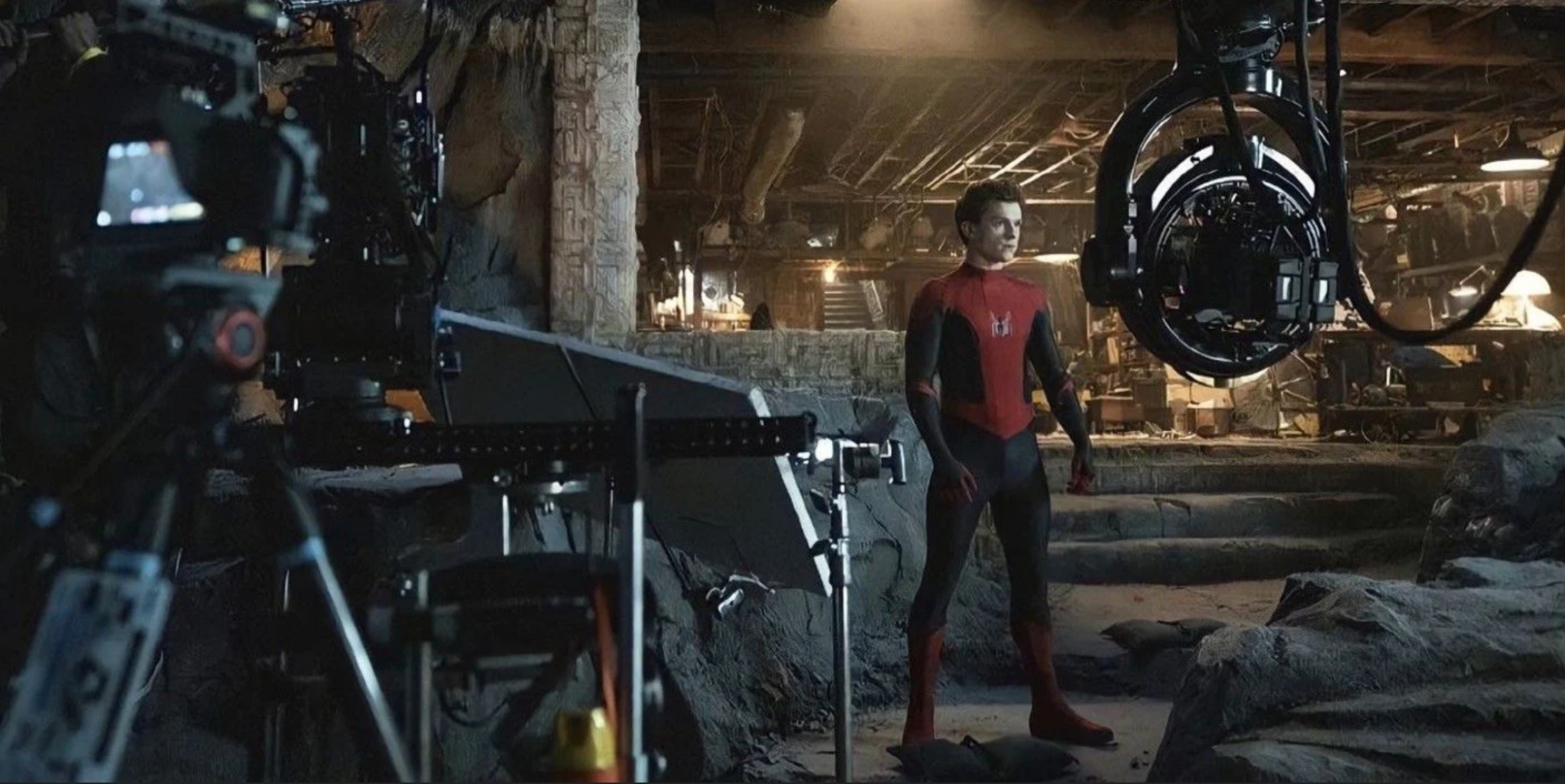 Going out with a Bang

Lastly, I wanna talk about the explosion scene in the trailer.

Firstly we see J Jonah Jameson who’s wearing very similar clothes to what he had on in Spider-man 3.

We actually get a lot of moments at this building namely the sandman and electro storm that we see happening. There’s also a moment in which Doc Ock is blasted out of a window and there is potential that he’s actually turned good at this point and he’s trying to fight the villains.

Other shots we see are that Peter dives at a pumpkin bomb and he catches it in the air as it explodes. This explosion actually happens though and he’s unable to stop it though his suit and superpowers might have saved him.

However, someone it might not have saved is Aunt May who we see inside this building. If you look at her hand she has a strange device in it and this could be what’s used to warp the villains to the Sanctorum prison. It was reported by Big Screen Leaks that the magic we see on the gauntlets is actually an infused web shooter that allows him to zap the bad guys to the basement.

I kinda feel like May may be rushing to Peter to give him this equipment so that he can shoot the Green Goblin back there and unfortunately she’ll get caught in the blast. This would explain why Happy is outside looking devastated and why Peter is out in the rain at night looking devastated.

Aunt May dying would actually make a lot of sense as in the comic books after Peter’s identity was revealed, hitmen went after him and they ended up shooting May in the process.

Though people think MJ will die I don’t think that this is the case as we see her and Peter kissing in the sunlight whilst he’s wearing the integrated suit and I think that this likely happens at the end of the movie after the statue of liberty scene.

Anyway, that’s all the extra stuff I thought was talking about after the initial breakdown you sucker.

Got you here for another one you mug but obviously, I’d love to hear your thoughts so make sure you comment below and let me know.