Welcome to the Heavy Spoilers show, I’m your host Deffinition and if waiting for the Whisperer War was wearing you down with the Walking Dead then it looks like we are finally gonna get the answer to who the true Alpha female is.

Episode 3 really started to set the chess pieces in place for an awesome showdown between the survivors and the Whisperers and episode 4 hammers home just how much everything is on a knifes edge.

Throughout this, I’m gonna be breaking down everything that you need to know about the new release as well as what we can take from the ending.

There will be heavy spoilers here so if you haven’t had a chance to watch the episode yet then I highly suggest that you turn off now.

That’s your last chance to back out but with that out the way, I just wanna give a huge thank you for clicking this video, now let’s get into Episode 4 of Season 10!

Episode 3 Of the season was a really cerebral one that massively dived into Carol’s mental state and showcased that she may not be dealing with things in the best possible way. When it comes to taking care of kids she’s pretty much been like Todd from Breaking Bad and this is clearly taking a toll on her.

To make matters worse, Alpha who not only killed her adopted son and also beat her in a staring contest, decided that new borders needed to be drawn up in order to teach the survivors a lesson for crossing into their territory. This massively limited their hunting ground and Episode 3 confirmed that Alpha was keeping a close eye on them even though no one believed Carol that there were Whisperers everywhere due to her psyche.

Episode 4 pretty much showcases that Carol isn’t the only paranoid one and it cements that other people believe that the Whisperers are using Guerilla Warfare to terrorize their camps. There’s a real theme of masks to this entry in the season and whilst it could just be that everyone on set is celebrating Halloween there’s the motif here that everyone is having to up their game in order to keep the truce. Lydia states that the people of Alexandria are wearing masks pretending to be nice and there is a feeling that due to the world that the group now live in, everyone has to put on a facade in order to get by day to day.

We saw in the last episode when Walkers were laying siege to the compounds that Alpha could be blame-free due to the fact that she hides behind a mask and like I said last time, this is gonna cause escalation as well as people suspecting that she is the cause of it all, even if she isn’t.

There’s also suspicion in the camps with Lydia implying that A-Town isn’t as nice as they appear to be and the fact that Carol and Daryl, though their names rhyme, are no longer really BFF’s shows that things in the camp aren’t all that happy. We get an awesome montage to the song ‘Heaven I Know’ by Gordi and watch as Siddiq sees Rosita with Gabe, which Lydia notices and this exemplifies that everyone is moving apart from one another and everyone is aware of this. 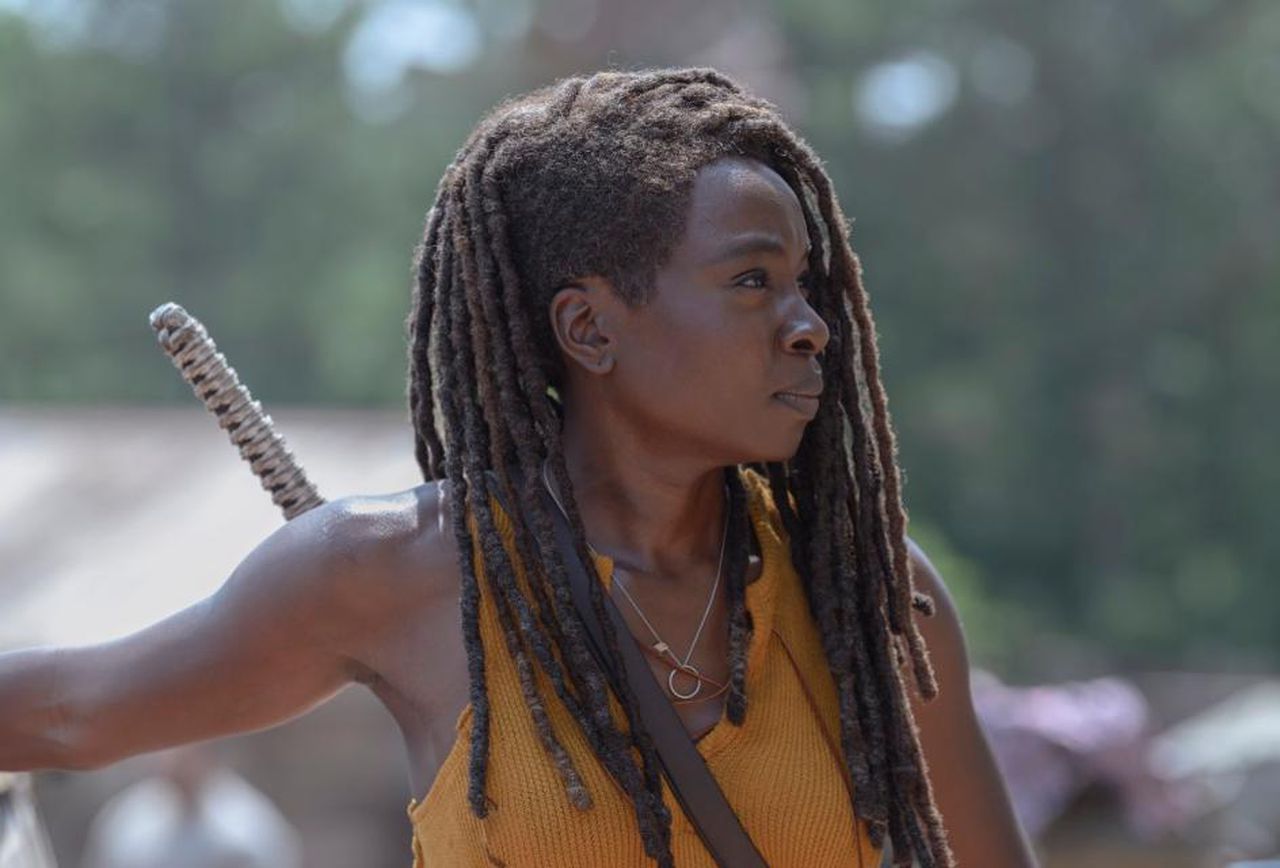 Divisions In The Camp

The real beating heart of this episode comes from the walls that are being put up with there being clear divisions over what to do with the Whisperers, we as audience members know exactly how it’s going to go and even in the camp they realise that you can’t have people who cut people’s faces off living next door and there’s a real sense that we all know a relationship with psychopaths only go one way.

This all comes to a head when the walls are brought down literally which allows Walkers to swarm in on our survivors. This simply isn’t an accident and the collpase of this pretty much puts up new walls in people’s minds with the camp dividing into two factions. The ones that wish to take down Alpha once and for all and the ones who think everything is fine and that Alpha is a lovely person and should bring her hat and have a nice little party…yaaay.

Deep down though it’s clear that old Alpha has been reading the art of war and is purposely exhausting the survivors as much as possible in order to take them down as easily as possible. If any of you have ever read Batman Knightfall then you’ll know that in that Bane freed all of Arkham and then when Batman was completely broken from rounding them up, swept in and took him down. Alpha is definitely the BANE for the camp and she even has the shaved head.

Anyway, this leads to a mad dash to repair the fence at Hilltop whilst Alexandra prepares for war. Lydia is bullied but she goes all Carrie on them to prove her point. What is it with teens doing protests, anyway this backfires a bit and she is really badly beaten which indirectly ends up having her pushed towards Negan who, can I just say now is the perfect time to bring this guy out against The Whisperers. Give him early release on good behavior or something….ah wait he’s just killed someone.

This really splits Alexandria right down the middle once more with the group having to decide whether Negan should be executed for another murder whilst the character argues that he actually did the right thing. It’s a really complex issue and Daryl is clearly conflicted about the entire thing, not knowing whether to spare him yet again or to finally do what many believe that Rick should have all that time ago.

In steps Carol who wisely recognises that this is the work of The Whisperers who want everyone to turn on one another in order to take them down. We saw last time that her mental state was slowly becoming her undoing and though she may have recovered from it, others around her are facing the same demons that she was. This includes Zeke who almost commits suicide and ends up kissing Michonne, looking for any possible connection to keep himself in this world one second longer. I doubt this will develop into a relationship anytime soon but it shows just how burned he is from losing his son and the love of his life.

Mirroring this we also see Magna and Yumiko’s relationship first hand with the former seeming very distant after getting it on. It’s revealed that Magna is having to deal with the fact that since the zombie apocalypse, the roles in their relationship have changed with us getting the reveal that Yumiko was Magna’s lawyer before everything went to hell and the big M doesn’t like the fact that the roles have reversed.

I know it’s not a big thing in the grand scheme of things but it pretty much cements the relationships in this episode and how everyone is drifting apart from one another due to the way they look at the world.

Anyway, the People’s court is held over Negan which ends in a deadlock, leading to Gabe deciding to sleep on it. You can’t keep ya boy Negan down though and he manages to escape his cell which is pretty much going to be a big focus of the next episode. Now, going off the comics and there is massive massive spoilers here about the fate of Alpha in the video from now on so if you don’t want it ruined then I suggest you turn off. No I’m serious this could also ruin the show. 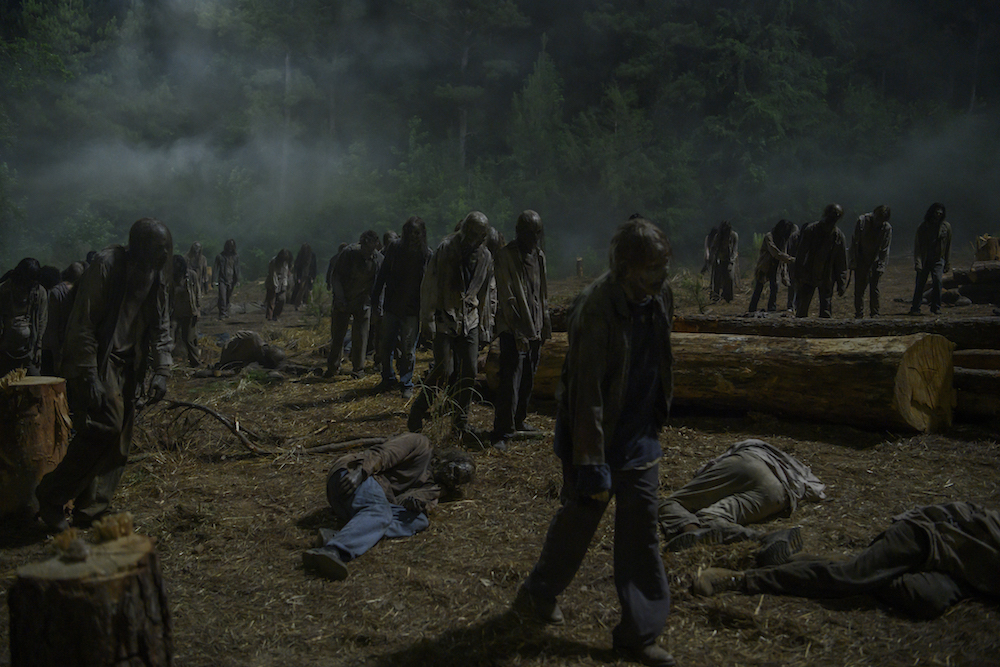 Anyway, if you’re still here, in the comics, Negan manages to escape his cell due to a boy named Brandon Rose who’s father Rick killed in self-defense. He hates the character and Brandon reveals that he freed Negan to allow him to join the Whisperers to start a war between the two. Negan kills Brandon and enters the Whisperer territory where he is taken prisoner. Upon entering the group he professes his love for Alpha and begins to live life with them, eventually confronting Alpha about how she allows them to live life. He states that he’s completely dead inside and is just pretending to have emotions which means he knows that she is faking it and she breaks down which allows Negan to get close and slit her throat. Look I said it was spoilers.

Now I don’t think that this final element will happen in the show as Alpha is just too good of a character but I can definitely see Negan joining the Whisperers too. We also get hints in the finale that the group are being watched by the Whisperers at Oceanside with Michonne, Luke and Judith heading out to investigate in the best ride in Alexandria. The episode ends with Daryl trying to remove graffiti that says ‘Silence The Whisperers’ but we know that getting rid of this idea is gonna require more than soap and water. Where is Leonardo Di Caprio when you need him?

The episode fades out to Heaven I know once more and we get the feeling that this is gonna turn into hell pretty soon.

Looking at the trailer for next week it looks like Negan will indeed be joining the Whisperers and who knows he might even enjoy it. Alpha seems to be open to this idea, stating that they will crush them and I really hope that after this it all kicks off. There has been a lot of set up this season so far but it has been enjoyable and I can imagine the episode with Negan on the run being a thrilling one as it is something very special in the comics.

Overall this is another solid entry that, though it doesn’t feel as nailbiting as some of the prior entries in the season so far is still a really engaging one that showcases just how fractured everyone really is. There is huge potential here for everything to come crumbling down and whilst the walls and fences are falling, the divides in the camps are rising. This was a nice little entry and I’m very excited to see what happens next time.

Obviously I’d love to hear your thoughts on the episode and what you wanna see down the line. Comment below and let me know!