Game Of Thrones is set to showcase it’s big battle between the Night Kings Forces and the newly formed union of Westeros in the upcoming episode.

However, there is another theory floating about that says we might actually be getting back a long-dead member of the family during the battle and throughout this article, I’ll be breaking down all of the evidence that supports the theory.

There may be some spoilers here, so if you want to go into the episode as blind as possible then I highly suggest that you turn off now.

With that out the way, thanks for clicking on this video, I hope you enjoy it now lets get into my breakdown of the Ned’s Not Dead theory!

The big battle between the White Walkers and Jon Snow’s forces is about to begin and whilst the citizens of Westeros are apparently tucked away safely in the crypts of the city, there’s a big flaw in that plan.

Our heroes seem to have forgotten that the Wights, namely The Night King, has the ability to raise the dead and therefore this is probably a worse hiding place than the one Sadam Hussain picked in the Iraq War.

The Starks have ruled Westeros for 8,000 years so potentially there are a countless number of corpses stuffed away in their Crypts that could add a legion of undead to fight for the Night King, one of them being Ned Stark.

Stark has been long theorised to be returning to the show and this seems like the perfect opportunity to bring him back to prove that Sean Bean doesn’t always die for good.

So what evidence is there to support this?

Well, in the promo trailer for the upcoming episode, there is a moment where Daneyrs tells Jon: “the dead are already here.”

This, of course, signifies that there are hundreds of corpses within the city walls and therefore the Night King doesn’t even need to send his army in. 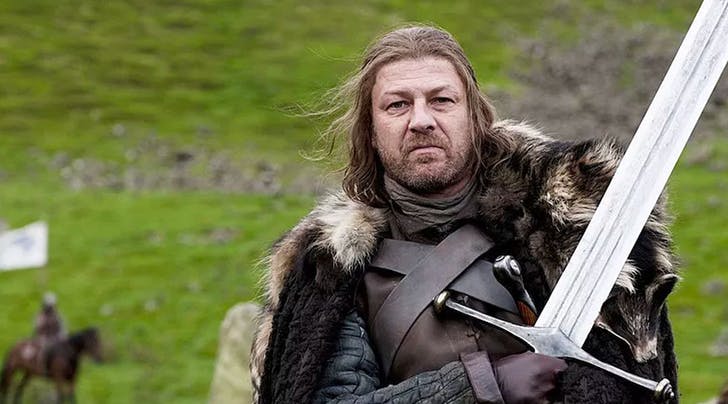 Vladimir Furdik who plays the Night King also recently teased a resurrection scene in an interview with Entertainment Weekly.

In that he said:

Could this perhaps confirm that The Night King will fly over the city and raise the dead? Remember, he doesn’t even have to touch them to reanimate them so this could potentially be the method that he uses to destroy the city from the inside out.

The last two episodes of the season have been about bringing people together for pleasant reunions so could this new release focus on Nightmare ones?

Reference In ‘A Game Of Thrones’

We won’t know for sure until it’s out but even George R.R. Martin’s has referenced the undead rising from the tombs in the book ‘A Game Of Thrones.’

In that story, Martin had Jon Snow have a nightmare in which he saw his dead family members rise from the crypt in the following paragraph.

“Last night he had dreamt the Winterfell dream again. He was wandering the empty castle, searching for his father, descending into the crypts. Only this time the dream had gone further than before. In the dark he’d heard the scrape of stone on stone. When he turned he saw that the vaults were opening, one after the other. As the dead kings came stumbling from their cold black graves, Jon had woken in pitch-dark, his heart hammering.”

This would be an amazing easter egg for fans of the source material and it would be brilliant to see a return of all of the family for this big reunion.

Of course, Ned doesn’t have a head anymore, I call him no head ned back from the dead, by the way, so I can’t really see him providing much of a threat. The rest of the family, on the other hand, could be terrifying and this would explain why Arya looks so scared.

Obviously we will find out next week if this is the case but in the mean time I’d love to hear your thoughts on the theory and if you think it will happen.