The post-credits scene for Morbius has reportedly leaked.

Throughout this we’re just gonna be breaking down what apparently happens after the credits roll and how it connects to the MCU. There’s also a couple of fans that claim to have spotted the living vampire in Spider-Man: Homecoming so we will also be going over that to discuss whether we think it’s true or not.

There will be heavy spoilers here and whilst all leaks like this should be taken with a grain of salt it does tie in together with the trailer so it makes a lot of sense. Still this could turn out to be untrue but yeah we don’t want to potentially ruin anything which this video will likely do as certain elements of it seem legitimate.

Now let’s get into our breakdown of the leaked Morbius scene.

This leak comes from We Got This Covered and yup I wouldn’t normally cover what they got us? What? But it does seem to line up a lot with the trailer and once I get into it you’ll see why people are giving this a lot of weight.

The article itself was later reblogged on IMDB so yeah, it does seem to be getting picked up by fairly reputable sources and because of it seems like something we could be getting in the final film.

According to the website this leak comes from the same source that told them that Kevin Conroy would be playing the Kingdom Come Version of Batman, that Daniel Radcliffe was eyeing up Moon Knight and that Gal Gadot would wear Golden Eagle Armour in Wonder Woman 1984. They often say stuff like that to sound more genuine but I did go back and specifically look at those articles and line up the dates and to be fair to them they did post them way before they were officially announced so yeah, this seems more genuine.

According to the website, we have already actually seen the first post-credits scene and this centers around Jared Leto’s character, Michael Morbius coming face to face with Michael Keaton’s Adrian Toomes aka The Vulture.

The character who was last seen in Spider-man: Homecoming makes a big splash in the trailer and the cameo was almost like a post-credits scene for the character.

This moment was so big that it made Michael Keaton, Morbius, and Vulture trend on twitter after it’s release fans like myself who were a bit so so on the film got hooked. This scene pretty much made the movie a must-watch for me and though there was a Spider-man poster seen earlier in the trailer, the cameo just made the connection to the MCU seem a lot more legitimate.

Sony clearly wanted to roll this out first to let everyone know from the off that their movies are now in the MCU and no matter what Kevin Fiege says, they got him. They got you, Fiege, now you gotta bring em all over.

After going back and watching it, reading comments and so on, it seems like quite a lot of people online said that they believed that this would be the post-credits scene of the film and that they dropped it in the trailer because marketing-wise it makes sense to at least show something to get people into seats.

The line that Toomes says also makes a lot of sense as to why this would be a post-credits scene as Keaton drops the line: “Got tired of doing the whole good guy thing huh?”

So this fits into the story with Morbius clearly having met him before. From this, it also sounds like in their first meeting he may have offered Morbius something. You know, something sinister, something on a black couch, if you wanna be in more movies you gotta do this kinda thing Morbius. Anyway from the looks of it Morbius rejected whatever this thing was and he later changed his mind, and then later encountering the character this is why Toomes asked if he’s stopped being a good guy.

It does make a lot of sense to me and though it raises a lot of questions it ties in with certain things. 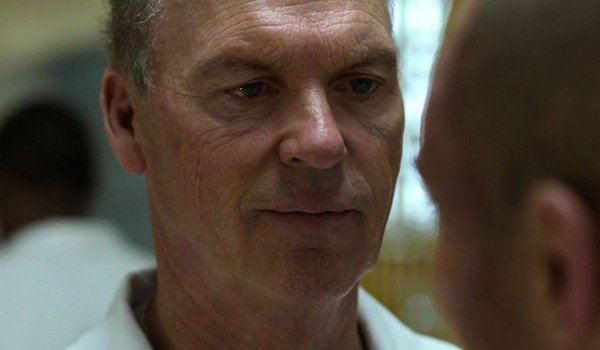 We can see from the trailer that at some point Morbius does escape prison due to his jumpsuit so it is possible that the two characters met there and then re-encountered one another after the main storyline of the film.

This clearly isn’t the first time that the two characters have met and we may even get this and several other cameos littered throughout the movies. There are rumors that Tom Holland and Tom Hardy may be making cameos but I think at best these will be in the background of scenes.

Perhaps an Eddie Brock news report will play on a tv screen in the background and Holland may pop up in a poster similar to what happened at the end of Far From Home.

Who knows, Eddie Brock may even be reporting on the Peter Parker murderer story and this would be a neat way to tie the two together.

According to the source, the second post-credits scene has Toomes introducing Morbius to none other than Doctor Otto Octavius, the man responsible for the original Sinister Six in 1964.

The context of the scene is unclear, however, this does build upon the prior line.

If this is true then potentially Morbius bumped into Toomes in Prison and was offered a position in the supervillain team before turning it down. We know that Scorpion is locked up with the character so they could have formed a union.

Morbius likely turned it down but after the events of the film went back to Toomes to take up the offer.

If this turns out to be true then I think it’ll be a massive moment in the Spider-verse and Sony at this point are likely trying to set up the Sinister Six after they failed to see this through due to The Amazing Spider-Man 2 not getting a sequel.

Sony definitely want a Sinister Six film and it seems like the most logical step to take.

Again I do think that this report is probably legitimate because when you rewatch the trailer, it doesn’t really seem like the kind of scene that would pop up in the middle of the movie and this is definitely perfect post-credits scene material.

It was speculated that Jared Harris was going to be playing the infamous villain however he later denied this. Who knows though, obviously he’s gonna deny it because if this is a big reveal then they will want to keep it secret. I’m kind of in two minds about this as I do actually think that Harris would be a brilliant Doc Ock but then again the actor has said he’s not doing it so who knows.

He did completely kill it in Chernobyl, has a similar sort of look to the Doc and comes across as very intelligent but yeah, if he’s said he’s not doing it then he probably won’t be.

If you’re a fan of the MCU then you’ll know that Marvel often retcon things into their films. We saw this in the case of Peter Parker being retroactively put into Iron-Man 2 and last year we reported on a theory that old Steve Rogers was at Peggy Carter’s funeral which was later confirmed by the writers of the film.

They often go back and do this because it’s just fun for the fans and it makes rewatching the movies a bit more cohesive as everything kinda ties together.

This sort of fits a similar aesthetic with many claiming that Morbius shows up as a prisoner during the post credits scene of Spider-man Homecoming.

Homecoming ends with the meeting of Adrian Toomes and Scorpion who both realise that they’re locked up together. It’s the start of the worlds worst bromance but there is potentially a lot more going on here.

The theory says that the bearded man that walks behind Scorpion will actually be revealed to be Morbius and that this will be retconned into the film to connect the two universes.

As you can see the shot does have a bearded guy in it however this is just a coincidence and it’s definitely not Jared Leto.

However, as we know Marvel don’t mind retconning things so there is potential that it could indeed end up being Morbius and who knows, if Sony are smart, they could show this scene from the perspective of Morbius and this would set up how the two characters met.

He has long hair and a beard and is probably where most of the prisons L’oreal goes to and also does bear some resemblence to how the character looks in the film so there is some leeway here to connect the two.

As mentioned earlier Toomes clearly knows Morbius and with him being locked up they likely met in prison so this presents the perfect opportunity for them to bump into one another.

I would love it if they went back and did this and then it’s revealed to fans that we actually got to see the sinister six meeting all the way back in 2017’s Homecoming.

It would make for an awesome way just to tie everything together and I really would love if it if they managed to pull this altogether and be like ‘we were there the whole time, F yo couch’

Now obviously I’d love to hear your thoughts on the leaks and if you think that they will happen in the film. Comment below and let me know.