We have some big news incoming in regards to Falcon and Winter Soldier.

The show which was announced in August 2019 is currently being filmed and because of this leaked images from the production have slowly been making their way to the web.

This morning subreddit Marvel Studio Spoilers dropped a whole host of images of Wyatt Russell who will be playing John Walker aka U.S. Agent in the upcoming Disney Plus series.

The actor was filmed in both his military uniform and Captain America Esque costume and there’s actually a lot that we can take from this information.

Incase you don’t know, U.S. Agent was actually introduced into the comics in 1986 as a villain known as SuperPatriot. Over time he sort of morphed and evolved into a government-sanctioned Captain America and this costume is clearly aping that.

The Disney Plus show is actually going to follow on directly from the events of Avengers: Endgame and if you remember at the end of that Steve handed the Shield over to Sam who then took up the mantle of Captain America.

Now it looks like Agent has the exact same shield and whilst some think this is a replica, I personally think it is the shield that we saw at the end of Endgame.

According to the leaks, Sam ends up dropping the mantle after realising the trouble that calling himself Captain America will cause.

Falcon and Winter Soldier are still outlaws at this point and even if they did help save the universe from Thanos, that doesn’t mean that General Ross is giving them a free pass.

We know that Steve was in hiding after he traveled back in time and this showcases that he had to lay low.

What I think has happened and bear in mind that this is a theory, is that Sam had the Shield, the Government went after him, arrested him and then created their own Captain America and made it seem official by taking the shield from Sam and giving it to Wyatt.

The shots here look like some sort of PR stunt and this could be them announcing to the world that it doesn’t have to live in fear after the apparent death of the Cap as they have someone in place.

I think the image of him out of his military attire is taking place before this and from the leaks, we do know that these are two separate scenes that Wyatt filmed and that they happen at different points in the series.

Either way, there’s a lot to process here and it looks like the MCU will be skipping the Super Patriot arc and going straight to the government-sanctioned Captain America Motif.

They are clearly trying to ape him due to the similarities in the costume and I am excited by the looks of this. Wyatts father Kurt already appeared in the MCU as one of the more notable dads in the saga and it’s great that he is getting to make an appearance too. 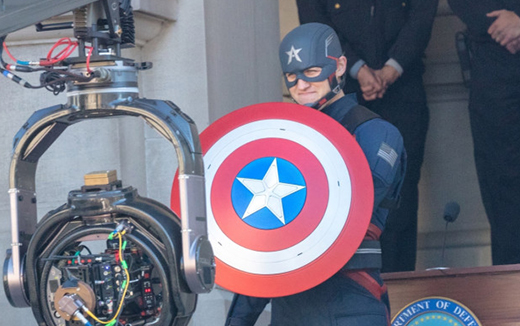 As for the Thunderbolts, this report comes from full circle cinema and there’s actually a lot of weight to it.

So we already know that Daniel Bruhl will be returning as Zemo and he has been a member of the team at some points. However, in addition to this, the report says that though it is unclear of exactly how the Thunderbolts will appear though they will be introduced or at least teased.

This lines up a lot with a recent leak on Black Widow that dropped earlier in the week from a 4chan user that apparently saw the film as part of a test group.

Now we will be going into the post-credits scene of that film and what the user said so if you don’t want to know then turn off now.

Anyway according to the user, the film ends with Yelena Belova played by Florence Pugh and Taskmaster going to General Ross with a flashdrive that is the big MacGuffin of the film.

Ross then says he’s putting together a team and this, of course, teases the Thunderbolts.

With both Widow and Falcon and Winter Soldier dropping this year I can see the two tying together and it makes a lot of sense to start setting them up across all releases.

Zemo is a big part of The Thunderbolts and with the news of this it looks like it’s all slowly falling into place.

I’m very hyped now and I can’t wait to see The Thunderbolts on the big screen, especially if we get a Red Hulk cameo. There are rumors that it will be a disney plus show but we will just see when it’s released.

Marvel are putting a lot into the streaming service and with the recent rebrand of the tv properties now going under the umbrella: Marvel Studios TV, there is a lot to look forward to.

Now obviously I’d love to hear your thoughts on the news and if you’re excited for what’s coming.