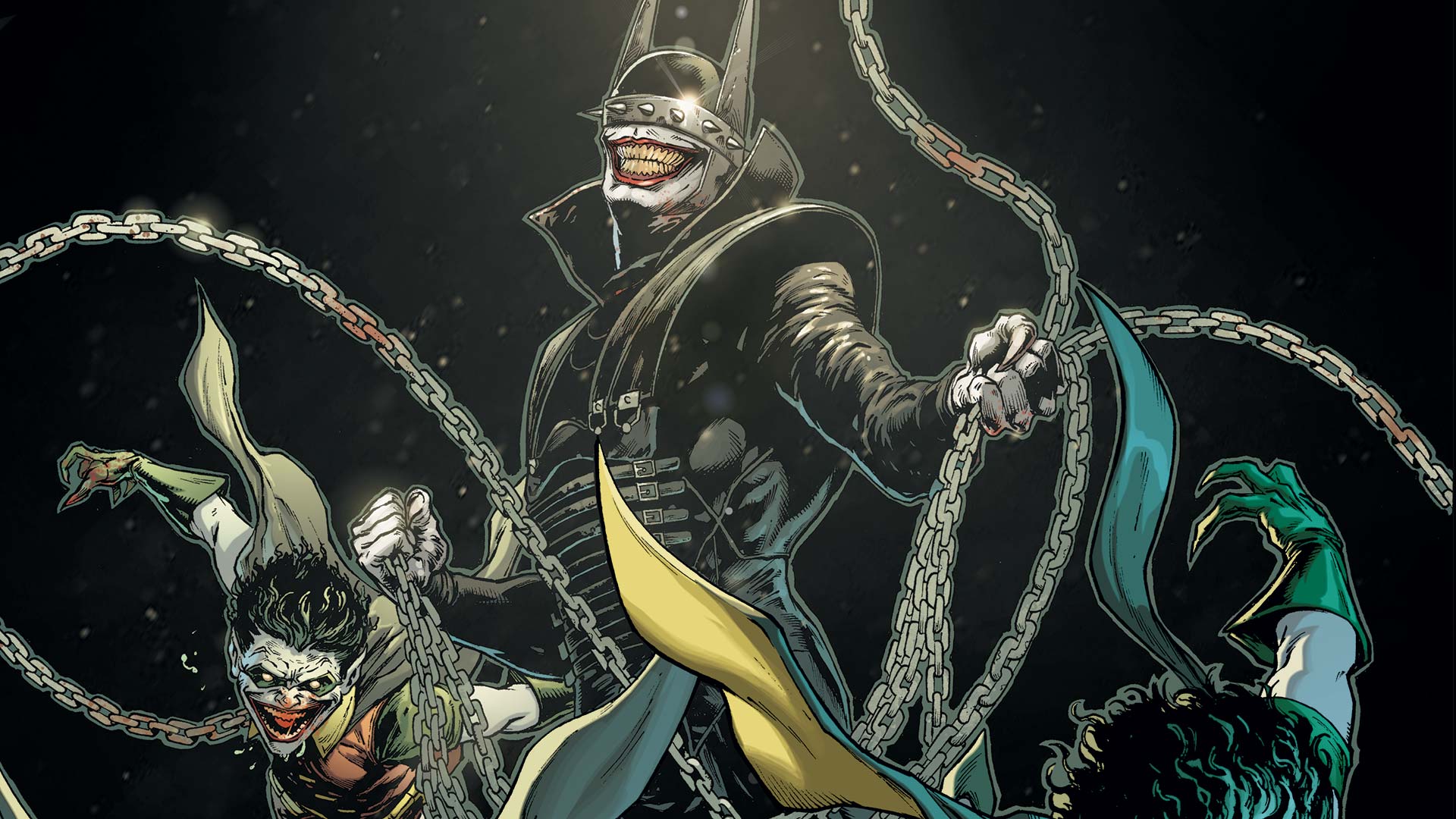 Dark Nights: Metal has by far been one of my favourite DC series from the last 20 years. Filled with none stop action, vicious villains and a plot that turned the entire comic book universe on its head, I found it to be a must-read.

One of the most interesting aspects of the storyline was the inclusion of the Nightmare Batmen. They were sinister, sadistic and the perfect demonstration of what Batman could become should he give into his deepest and darkest desires.

Here to explore their backstories is Dark Knights Rising. As with most tie-in graphic novels I’m anxious to see if it will live up to its potential, or, if like the vast majority of other tie-ins, fail to deliver on its own merits.

There will be huge spoilers here so it may be best skipping to the final score if you want to go in with fresh eyes.

With that out the way, let’s dive into Dark Knights Rising!

The Red Death Of Earth 52

Opening on a Dark Knight Returns-esque universe we see Batman rip The Flash apart in order to steal the speed force from him. It’s one hell of an opener that instantly showcases how bad things could get if Batman decided that enough was enough and decided that murder was his only option.

Beautifully laced with the subtext of what set off the events that caused the sudden mood change in The Caped Crusader, Red Death expertly depicts just how close the Batman of Earth Prime is himself from going AWOL.

What Dark Knights Rising expertly does throughout is showcase how Batman could easily murder and maim the Justice League should he need to but his goodness is what holds him back. With that aspect missing from the personalities of The Dark Knights, this becomes an amazing sadistic look at just how unstoppable our favourite DC character is and I was instantly hooked from the introduction. 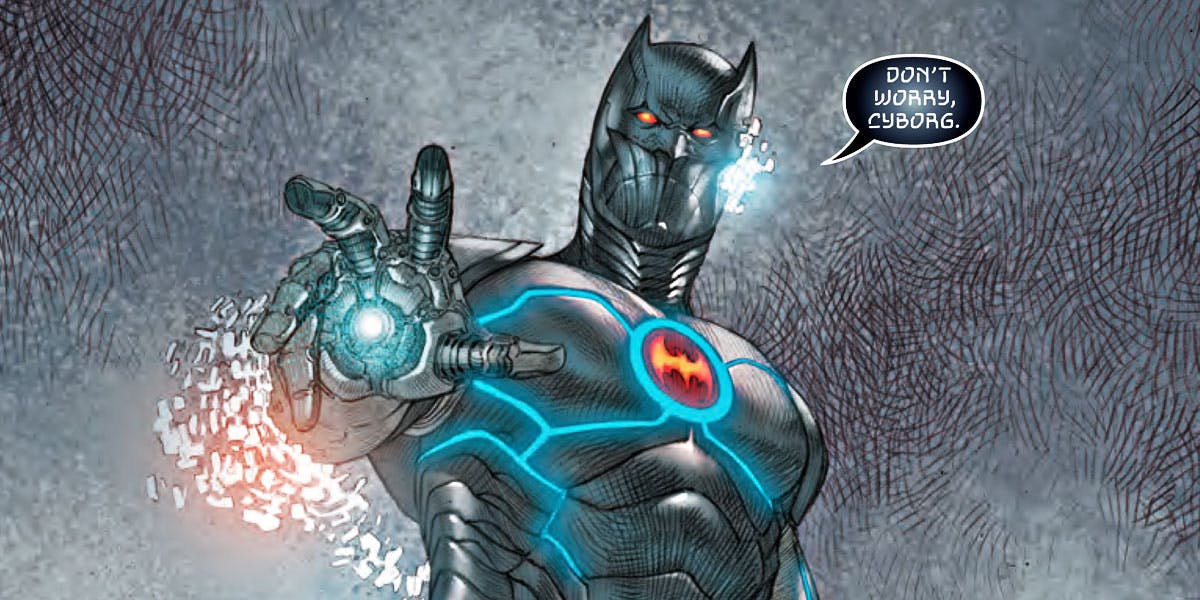 One of my favourite stories in the book is that of Earth -44. Centring around a rogue A.I. named ‘The Alfred Protocol’, this issue deals with the loss of Batman’s mentor and how trying to resurrect him has dier consequences. It’s a blast throughout and by far is the best illustrated issue in the book due to its incredible line work and dour colouring.

Watching Alfred tear through Gotham’s Rogues Gallery in order to help Batman has some twisted logic to it but I found myself jumping for joy seeing Bane getting brutally gunned down, especially as he was the one who caused the Butler’s demise.

It’s a fantastic tale that works as an incredible standalone issue showcasing what would happen if Batman became The Terminator and the only thing is can fault it for is that it doesn’t go on longer.

One Ring To Rule Them All

The books mid section focuses on an almost Elseworld tale of The Green Lantern Batman and AquaBatWoman. Whilst neither match up to the stories that precede them, both have their little standout moments that stop them from becoming mundane.

The gender swap for AquaBatWoman is a nice idea but ultimately feels shallow due to it being surface level and not really changing up much of the plot dynamics. I would’ve loved to have seen her relationship with Sylvester Kyle play out in the book, however, he is mentioned only by name once or twice and it becomes difficult to relate to her loss due to there being no real connection to the aforementioned character.

This is a shame as the seminal Wonder Woman story that follows it hammers home just how moving the aesthetic can be. Feeling like a Greek Tragedy, it involves Bruce becoming the God Of War and losing everything he loves because of it. There is a real personal touch to the story and the version of Batman presented feels like one of the book’s most formidable which makes the issue unforgettable.

This intimidating tale is mirrored in the Batman of Earth -7. Unable to defeat a Rogue Superman, must transform into a monster and I loved watching The Dark Knight become Doomsday. The issue speaks volumes to just how driven Batman is in his need to win and highlights the lengths that he would mutilate himself to in order to save the day. There’s a great little nod to the Kryptonite Spear from Batman V Superman and watching the two face off is just as epic as the film and all their battles throughout the years.

It intertwines perfectly into The Batman Who Laughs storyline and sets the stage for what is arguably the most fascinating of the bunch. 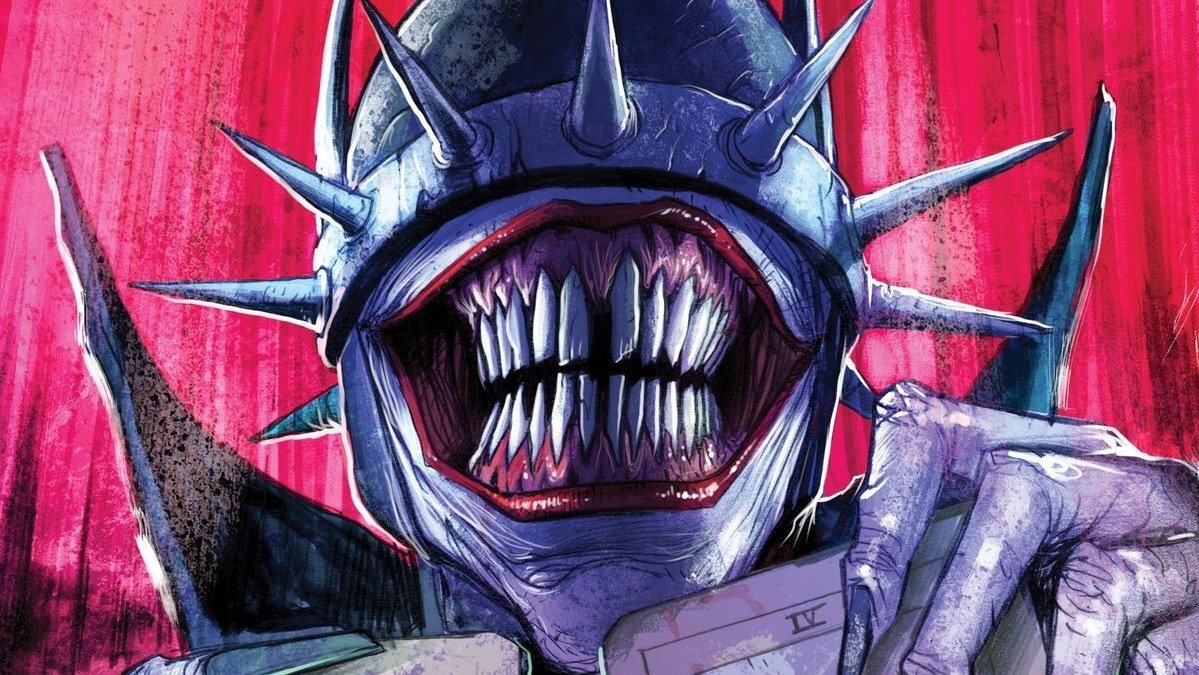 After murdering the Joker, Batman is infected with a new strain of Toxin that alters his brain and slowly forces him to take on some of his arch nemesis’ character traits. It’s heartbreaking to watch him slowly become the thing he hates most and the lack of control he exhibits is as paralysing for the reader as it is the character.

Gut wrenching throughout, it’s one of the darkest tales ever put to page for the Dark Knight and I couldn’t believe just how depraved he had become by the end. This is the most evil incarnation of any Batm—no any DC villain ever and by the chapters close I was shocked to my very core.

Finishing on a fantastic final showdown between the DC heroes and the Dark Knights, the book hits a home run and feels like one of the best crossover events I’ve ever read. Dark and tragic throughout its awesome to witness the sinister side of Batman rise to the forefront and showcase just how horrendous things could be if he ever lost control.

Perfectly tying into Metal, this graphic novel is arguably as good as the main run and succeeds in every way. A joy to read, Dark Knights Rising gets a…