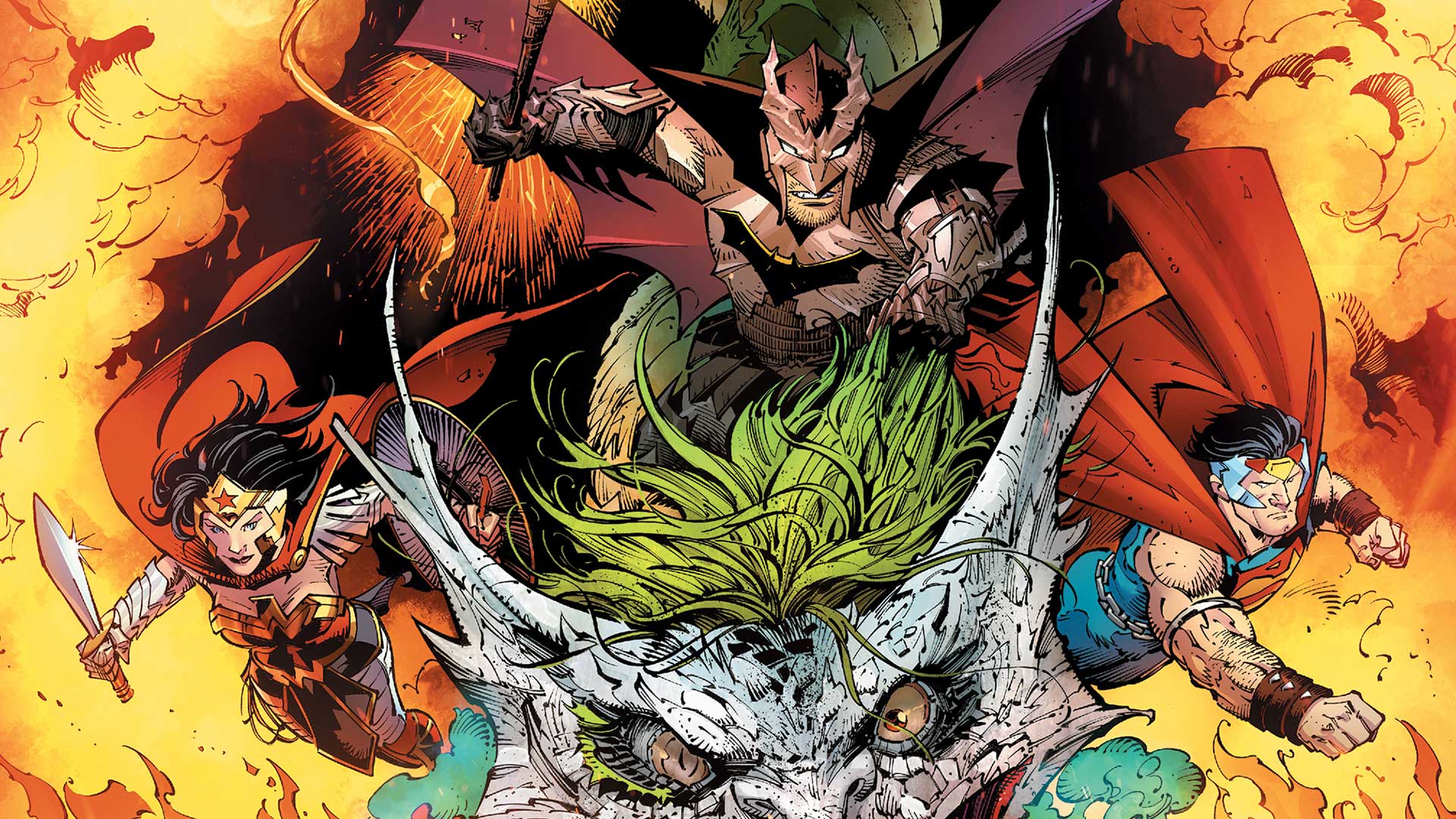 Metal got off to a phenomenal start with the introductory chapter Dark Days: The Road To Metal. This incredible opener by Scott Snyder set the stage for what seems to be one of DC’s most exciting mega events since Rebirth.

Teaming up once more with Greg Capullo, DC’s A Team are back! As a huge fan of their New 52 Batman Run, I cannot wait to see what the dynamic duo conjure up and this has the potential to be one of the best DC books to date.

Throughout my review there will be several spoilers so it may be worth skipping to the final score if you wish to go into the graphic novel blind (as a bat)!

With that out the way let’s dive into Dark Nights: Metal!

Gotham has been devastated by a colossal mountain that has sprung up in the centre of mid town. With the aid of The Justice League, Batman discovers that the source of this mysterious monolith ties directly back to the mystical metals that he has come across during his career as a vigilante.

Encountering The Black Hawks, The League are exposed to the history of the Metals and Snyder does an outstanding job of interweaving these new mcguffins into the DC mythology.

We learn of a Dark Evil that has stalked Batman for aeons and Snyder does a fantastic job of keeping the heavy exposition along with the breakneck twists and turns from toppling the story over and making the introduction convoluted. There are several cameos and re-envisionings of characters that will surprise hardcore fans and throughout the opener I found myself turning page after page, desperate to discover exactly what was going on.

Batman, stubborn as ever, attempts to unearth the mystery on his own but as always the Justice League do their best to help out an ally and there is a strong sense of camaraderie that will get fans of the characters fully invested in the mission. 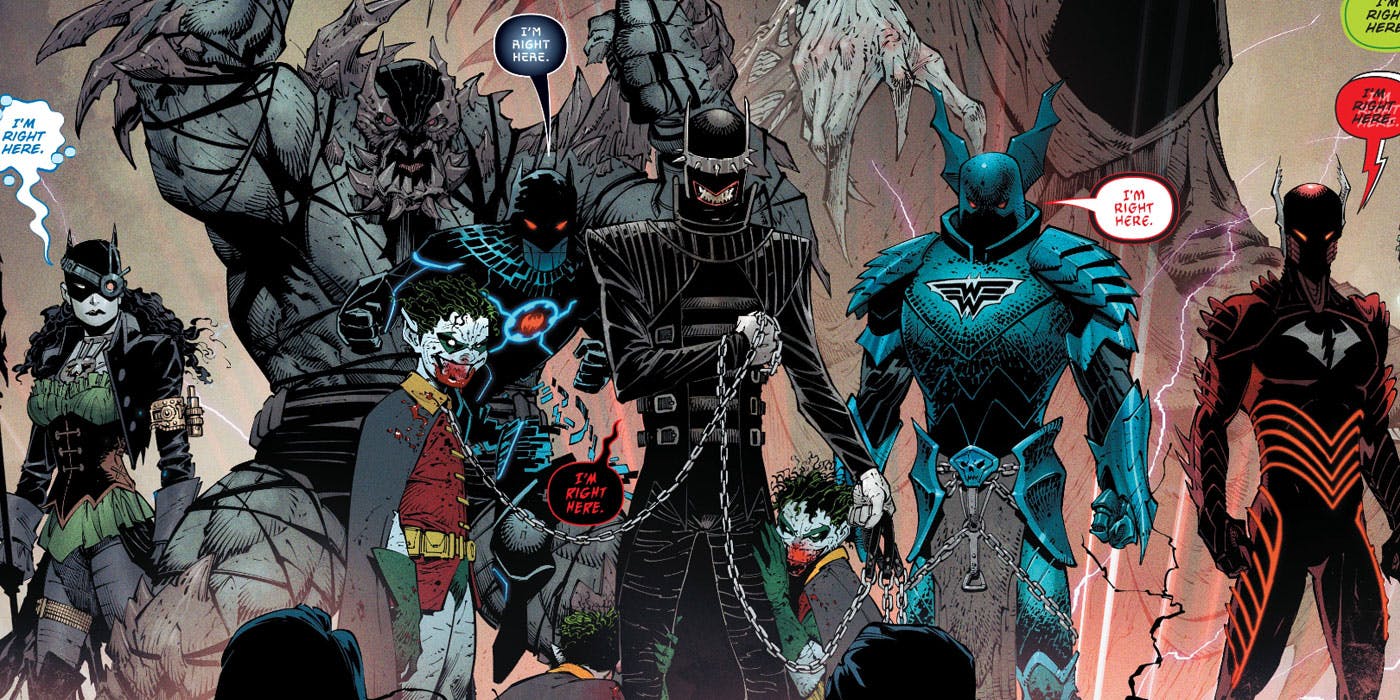 ‘From the journal of Carter Hall’

What I love most about Metal is how it sheds new light on often overshadowed elements of the DCU. Learning of Hawk Girl and Hawk Man’s Origin was overwhelming at first but as the pieces began to fit together I saw that Snyder’s master plan encompassed the old and new in thrilling ways that would appeal to hardcore fans and new ones alike.

There are outstanding references to The Dark Knight Returns, The Death Of Superman, Kingdom Come and even the Batman 1966 tv show theme tune. Metal not only relies on and builds on what has come before, it also celebrates it in a unique way that doesn’t feel like it is playing on nostalgia in order to get a cheap thrill.

‘I am Bruce Wayne’

Batman’s history is used against him in order to bring forth the Bat God, Barbatos. The Caped Crusader is expertly tricked into unleashing the Dark God and his henchmen (twisted versions of Bruce Wayne from the dark multiverse) onto our Earth. Watching The Dark Knight’s ‘oh sh*t’ moment as he realises the depths of which he has been manipulated is completely engrossing and it paints him as the most vulnerable that he has ever been.

It’s plays out beautifully on the page and Capullo’s astounding line work and character design mean that the villains will lodge themselves into your memory the moment they appear. These are the Batmen of your nightmares and I was instantly creeped out upon their arrival. They are impactful and each and every one of them has something that makes them unique and fascinating. My favourite is The Batman who Laughs, arguably one of the most twisted comic characters ever created, he struts around with cannibalistic Robin lap dogs, grinning from ear to ear. Capullo has clearly drawn inspiration from works like HR Giger and Batman’s own rogues’ gallery but he has used these to create something that rivals those in more ways than one. Even just looking at them you totally understand the helpless situation that Batman has now been pitted in and their arrival instantly elevates the storyline to an incredible height. 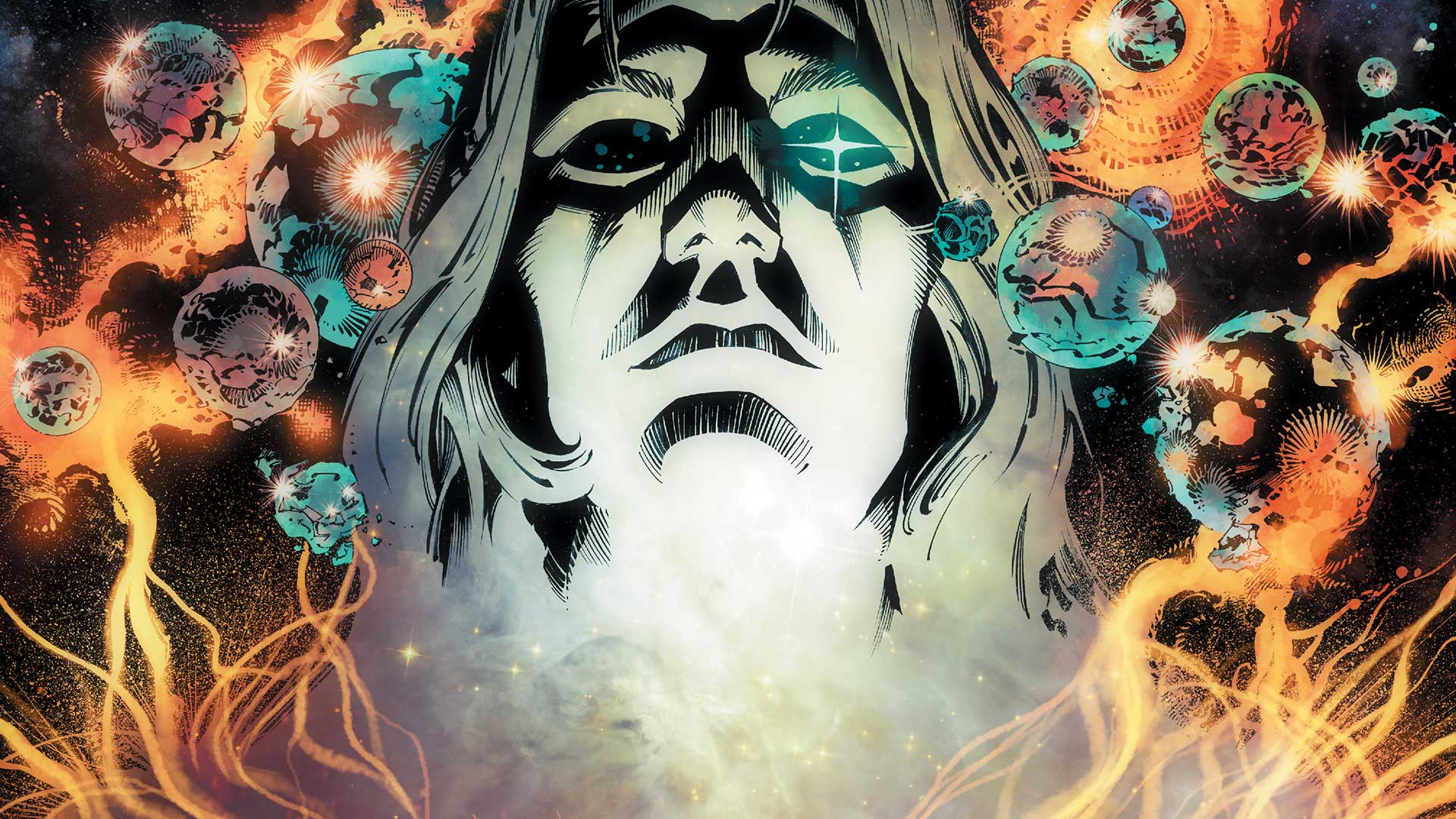 With the help of Sandman, Superman and Batman are able to find a way to end the nightmare once and for all. Traveling to the cradle of creation: The World Forge, they discover a method which allows them to undo all the hurt brought forth by the Barbatos invasion. Of course, the journey is stacked with hurdles and it’s breathtaking to watch all hope crumble to ashes in the penultimate issue.

This sets up for an epic finale that delivers on a lot of levels and creates a DC Universe that has a hell of a lot of potential going forward. It’s a brilliant conclusion that feels just as bat shit crazy as the rest of the book and definitely finishes the series in the best way possible.

Dark Nights: Metal is a blast from start to finish, Snyder and Capullo beautifully capitalise on their prior work and if this is to be their last team up, it’s the perfect send off.

I had an incredible time with Metal and it is one of the best DC books that I’ve ever read. This is a wonderful storyline and you owe it to yourself to pick it up!

It gets an out of this world…