Skip to content
Why The Ending Of THE BATMAN Is Perfect

The Batman has one of my favourite endings to a comic book movie ever. Not only does it bring the character’s arc full circle from being a figure that represents vengeance, but it also symbolises the dedication that Bruce Wayne has to Gotham.

Just before the release of the movie we did a video breaking down the ending of The Dark Knight which is also one of the best endings to a film I can think of. It’s kinda wild to me that both that and The Batman culminate with Bruce riding off on a motorbike and in many ways they both symbolise the same things about the character but for different reasons.

Whereas The Dark Knight had Bruce sacrificing the icon that Batman was in order to protect good, The Batman has Bruce sacrificing his happiness to protect his city. It really works on a number of levels and throughout this video we’re gonna be breaking down exactly why we love it so much.

Now in order to talk about the ending, we first have to go back to the first scene of the film in which we’re introduced to Batman. Coming from the shadows in the form of a figure known as Vengeance he breaks out some hand-to-hand com-bat to take out an entire group of thugs.

After the shocking fight, we see their victim cowering on the ground, terrified of the figure that’s just saved his life.

Like a demon from the shadows Batman has mercilessly come forth and taken out a gang of bat bat boys with a-ffleck of his wrist without the Ben….dear me…can we stop with the crap puns.

Ok no more I promise.

So this sets him up as someone who intimidates everyone in the city both bad and good.

Intro to the Riddler

After his signal shines in the sky he’s called to a crime scene which is where he meets the first victim of the Riddler. Throughout the movie, we watch as he carries out a rampage on the corrupt in Gotham and in many ways he’s Batman on steroids becoming the bane of his life.

Think we got away with that one.

Riddler is just an extreme version of Batman and the pair mirror each other in many ways. After capturing him Riddler even believes that they’re so aligned that he’ll want to partner with him and this ideology flows to his followers too.

Upon beating down a thug they announce that they’re vengeance showing how Batman’s inspiration has caused more harm than good. This is something that Bruce himself states at the start of the movie when talking about the effect that he’s had.

“I wish I could say that I’m making a difference. Murder, robberies, assault – 2 years later they’re all up.”

It’s at this point that he realises that he’s not the hero that Gotham needs or deserves and that he has to become better if things are gonna improve.

Bruce goes through a literal Baptism in order to stop a group of helpless souls from getting electrocuted.

Upon rising from the water he reaches out to Bella Real who’s very much a symbol of real change in the city. A bit on the nose there but initially she’s hesitant to go with him. However, the person that steps forward first is the Mayor’s son who very much symbolises Bruce as a child. Much like him, his father was killed and this tragedy will clearly affect him for a long time. In saving him first Matt Reeves showcases how Bruce has managed to pull not only the kid but also himself out of the darkness into something brighter. 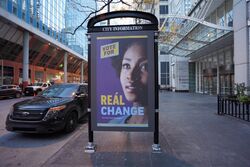 How the Final Scenes Show a New Batman

I think Reeves is an absolutely brilliant director and throughout this scene, he paints Batman as a beacon through the use of a flare that he carries through the darkness. Batman leads them out and it’s over the top of this that we get the narration that juxtaposes his comments from earlier in the movie that very much feels like a moment of self-reflection.

We watch as he carries a young girl to be rescued and she is used to reflect the change in the public’s perception of Batman.

Unlike the man at the train station, she grabs onto his arm and almost refuses to let go showing how he’s now become a symbol of hope.

What Selina Means to Batman/Bruce

Now after the Joker and Riddler tease we get Bruce and Selina having their final parting words. After looking over her mother’s grave she packs up her cat and decides to head to Bludhaven. Batman clearly wants her to stay though.

She predicts what’s gonna happen to Gotham and why it’s best to get out whilst the both of them still can. At this point she offers him another life instead of the one that she thinks is going to end up killing him.

Bruce almost seems like he’s tempted by it but the signal burns through the sky which takes his attention away from her. 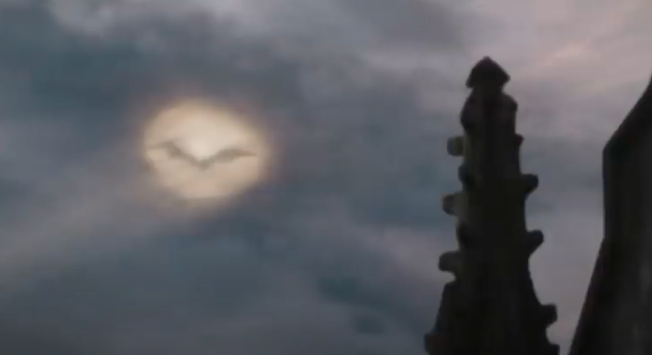 She utters the line that he’s spoken for which pulls directly from the ending of Zero Year in the comics.

Together the pair ride out through the cemetery before they park up at the fork in the road. Selina rides off to Bludhaven whilst Bruce stays behind. Now I don’t think it’s gonna be a surprise to anyone to know that this film is based on Detective Noir stories and Selina represents the Femme Fatale archetype. This is often described as being someone who is seductive and lures the protagonist either into a trap or offers something up that tempts them from their main goal.

Catwoman has pretty much always been one in every form of media and the one in the Dark Knight Rises of course led Bruce to face off against Bane where he was badly beaten. Anne Hathaway’s version also said that he had given everything he could and wanted to flee Gotham with him before the Nuke went off which he also turned down.

Here she’s tempting Bruce with another life that goes beyond the one he’s subjected himself to. Bruce has dedicated himself to this mission at the expense of everything else and she offers a form of happiness that will lead him out of the inevitable path of self-destruction that he’s on.

However, he turns her down and I love the way that he looks at her in the mirror as she rides off down the road. She very much represents someone free from the trappings that he finds himself in and it’s almost like he has a second thoughts as he watches her ride off into the smoke.

He quickly brushes this idea to the side and turns his eyes back to the road to focus on his mission once more.

Lots of flashes of things like the ending of Memento where it feels very tragic and bittersweet almost. The mission has become the only thing that Bruce really lives for at this point and he’s willing to sacrifice any chance at happiness in order to continue being Batman.

Ever since his parent’s murder, Bruce has dedicated his entire life to making sure that nothing like that ever happens to anyone else. He’s trained his body and mind to perfection so that he’s pretty much a weapon ready to tackle any threat that may be posed to him mentally or physically.

Because of this, he’s now at a point in his life where this is all he has and in making his life all about one thing there’s absolutely no balance. Bruce is a completely broken man but he also represents the sacrifice that must come if one wants to be a hero.

Batman is a symbol across the city of hope and if he was to take this away it could end up causing more damage, especially as Gotham is now at breaking point.

Most of downtown is flooded and the inevitable power vacuum that will appear means that there’s gonna have to be someone in the city who can stand up to the people that will now be vying for control.

This is what Batman is and Bruce realises that I think in these final moments.

He takes a glance at Selina and you kinda get the feeling he’s almost imagining the happier life he could have for a brief second with her before she disappears. 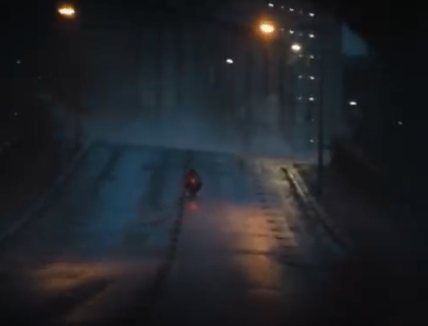 Instead of turning around and going with her though he keeps his eyes on the road, rides into the future and back to his city which he’s going to protect no matter what.

It’s a brilliant ending that very much surmises what it means to be Batman and also the cost that comes with it.

Like something ripped out of the film China Town or a 70a classic, it paints out the sad cost that comes with trying to be a force for good and how one must lose the things they care about in order to pursue goals like this.

It’s masterful storytelling done simply through the eyes of Pattinson who portrays all the stoic emotion and longing that he feels in this glance. I know there’s an argument for white eyes being used on the cowl but I think that it would rob us of moments like this.

We see the wonder that exists in him and then the focus as he turns his eyes back to the road and takes himself out of the fantasy.

Overall it’s an incredible way to end the movie and it’s the perfect way to close out this first chapter.

Going forward I’d love to see this scene repeated as we close out Pattinson’s arc and perhaps one day we’ll get this bike ride where he decides to go with Selina instead of staying behind.

However, I doubt it and that’s because that’s what Batman represents. The self-sacrifice that it takes to be a symbol of hope and overall it feels like the perfect ending.

Now obviously I’d love to hear your thoughts so make sure you comment below and let me know you punk.