Throughout the week we’ve covered a lot of the trailers that were shown exclusively at Comic-Con to those in Hall H. This has included Ant-Man and The Wasp Quantumania and Guardians Of The Galaxy Volume 3. So I thought I’d close out the week by touching upon the most elusive one that hasn’t been leaked online in any large capacity.

That is Secret Invasion.

The thriller is set to debut on Disney Plus in 2023 and throughout this post, I want to talk about what was shown in the teaser, some of the rumours for the film, and also what we can expect to see in it from the comics.

The comic storyline picked up in the aftermath of Civil War. There are several preludes and a lot of setup to it but if you pick up the main comic then you should be able to quickly jump onboard with what’s going on. 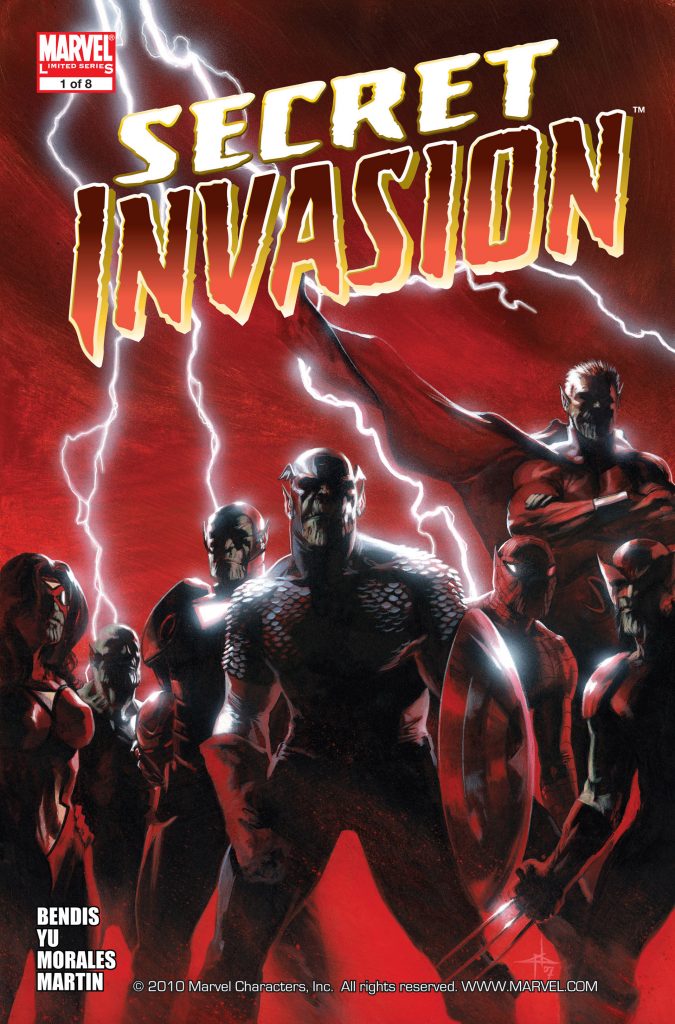 However, if you just need a quick rundown of the set-up to it, basically it involves Nick Fury discovering that Skrulls have transformed themselves into notable heroes in the Marvel Universe. Fury unearths a plan by Valentina Allegra De Fontaine where he discovers that she’s planning to kill him so that she can get access to highly restricted SHIELD intel. Fury kills her first and after she turns back to her Skrull form he realises that there are double agents amongst them.

This could be something that they tackle in the show itself especially with Val becoming a big name in the MCU now.

He ends up sending in Spider-woman to infiltrate SHIELD and to keep an eye on things for him.

Fury went into hiding and slowly he started to investigate the heroes and those who he believed were posing as Skrulls. Now the MCU did a big twist in that it turned the Skrulls into good guys during Captain Marvel. We even saw during Far From Home how Fury trusted Talos enough to let him pose as him on Earth and it’s gonna be interesting to see why they’ve changed into enemies that want to take over Earth.

I guess that there’s a splinter cell within them and that we’ll watch Skrulls on both sides fighting both alongside and against the humans.

Where are the Heroes?

Now in the comics shortly after Fury went into hiding, Tony Stark called together Reed Richards and Hank Pym to look over the body of Elektra Skrull, who had been brought to him by Spider-woman.

After Civil War, Stark became the head of SHIELD and realising that they’d been infiltrated he started to put together a plan to flush out all the Skrulls.

Spider-woman told them that she’d discovered a crashed Skrull ship in the Savage Land and the heroes headed out there to tackle the threat head-on.

Now, this led to a big fight in the area and at one point Tony was even convinced that he himself was a Skrull who had been hypnotised into thinking that he was the real Stark.

Several characters were revealed as being the shapeshifters including Hank Pym, Jarvis, Mockingbird, Dum Dum Duggan and even Spider-woman herself.

She’d set up the whole thing and I can imagine that there’ll be a reveal like Maria Hill or someone of that level actually being a Skrull…yeah beyond just the one in Far From Home. Now if you cast your mind back to the ending of that film then you’ll remember that Fury was out in space on a Skrull ship. 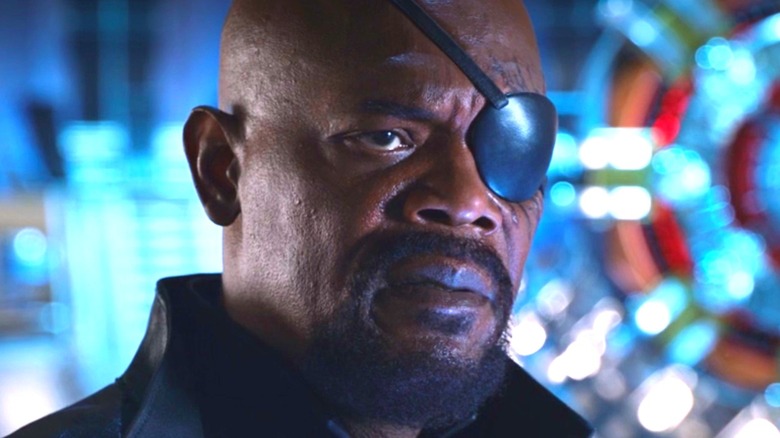 It seems like he’s been out there for a while as the teaser opens with him stepping off an alien vessel. I have a theory that ever since the events of Winter Soldier that he’s actually been off Earth as we get some strange dialogue in the next scene on from this. Both Fury and Maria Hill sit at a bar together and they discuss how Nick has been avoiding Earth for several years. Who knows when he was last on the planet and potentially a body double Skrull could even explain how he was able to get shot in Winter Soldier and still come back.

Let me know your thoughts below on when he dipped out.

It seems highly unlikely now that he actually went to Starks funeral and this was probably Talos. He touched upon this in Far From Home when discussing the Edith glasses and Fury has been lying low for quite some time. Hill says that she’s called him several times for help but that he’s been quite content to let those calls go to voicemail. You see kids, you don’t ghost Nick Fury, Nick Fury ghosts you.

Because of this, the conversation moves to how something very important must be happening on Earth for him to return. We watch Nick Fury as he says ‘how much do you know about your security detail’ to Rhodey aka War Machine. There are a lot of theories online that Rhodey might actually be a Skrull and that this might retroactively be used as a way to explain the recast all the way back in Iron Man 2. It would be wild if he’d been a Skrull this entire time and at Comic-Con we learned that a faction of Skrulls had been infiltrating Earth for years and years.

We hear the voice of Talos at this point and he says ‘you’ve got to be very careful Fury’ and we see that he looks the same as the SHIELD Director from Captain Marvel. He then stands up in a board room and we watch as others join him. It seems like these are all Skrulls too and Talos may have infiltrated the group himself.

Now we also meet a person that appears to be Fury’s boss.

We don’t know which character this is but she’s played by Olivia Coleman and she could potentially be a Skrull too.

She says “you’re in no shape for this fight that lies before us” and we then get several action shots.

This is a political thriller with a lot of the battles and fights being very grounded. There are SWAT team members, and expansive hallways and it all appears to be taking place on Earth. We then hear Fury say “this is my war, alone and I’m the last person standing between them and what they really want.”

The teaser ends with Talos asking “and what is that?” before we cut to black. 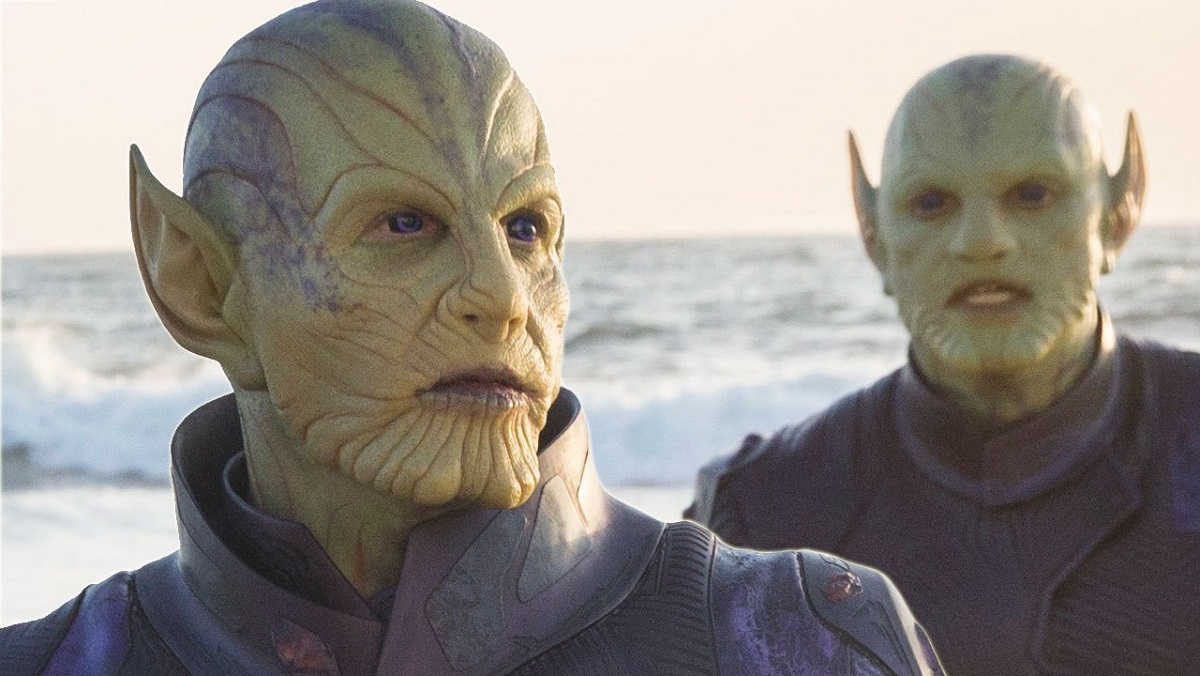 It’s a really exciting trailer and who knows who is a Skrull at this point! Fury might be one, I might be one, you might bloody be one.

Now from what I saw…I mean…what my uncle, sick of that joke, what my uncle saw. He couldn’t spot Emilia Clarke’s character in the teaser though it was filming half the screen.

Either way, she’s going to be playing a big role in the movie and ya boy is about to drop a spoiler alert for who she may potentially be. This comes from Daniel RPK who brought us the scoop a while back and it could hint at where the show is going.

This is a character that pulls from the comics and along with her fellow Skrull agent Klrr, the pair moved to Earth so that they could spy on us. Together they acted like your typical American family and they raised three daughters together.

They were hiding out on Earth to prepare us for the future Skrull invasion however things took a turn for the worst with the family.

Their daughter Ivy was taken by a group named Project Blossom who secretly sought out undercover Skrull agents. Ivy was thought to have been killed though this later turned out to be untrue.

The pair continued their mission in her absence and they also attempted to uncover Project Blossom.

Both she and her husband posed as Pepper Potts and Tony Stark and together they stole a lot of information for the Skrulls on the group. It became paramount that they took out the members of Blossom so that their overall plan couldn’t be uncovered and there is potential that this might even get pulled across to the show.

This Could Change Everything

Now what I love about this series is that it has the potential to really flip the MCU on its head in the same way that Loki did. Everyone could be a Skrull including my uncle which would explain how he got into Hall H to film the trailer and also why he looks like Kevin Feige.

I really hope that they make it as wild as the comic is as in that several big characters were revealed to be them which led to some oh s**t moments.

Now though it feels like this could be being set up as the final appearance of Fury, we know that the Marvels is going to feature him as well. That debuts after Secret Invasion so spoiler alert, he probably makes it out of it. I’m also interested to see how the end of Wandavision ties into it as Maria Rambeau was recruited by The Skrulls as well.

That scene clearly showed that they’d infiltrated Earth too so how it all connects to that will probably be explored in this series.

Now it’s a long way away but in the meantime, I’d love to hear your thoughts on the show and what you’d like to see in it.