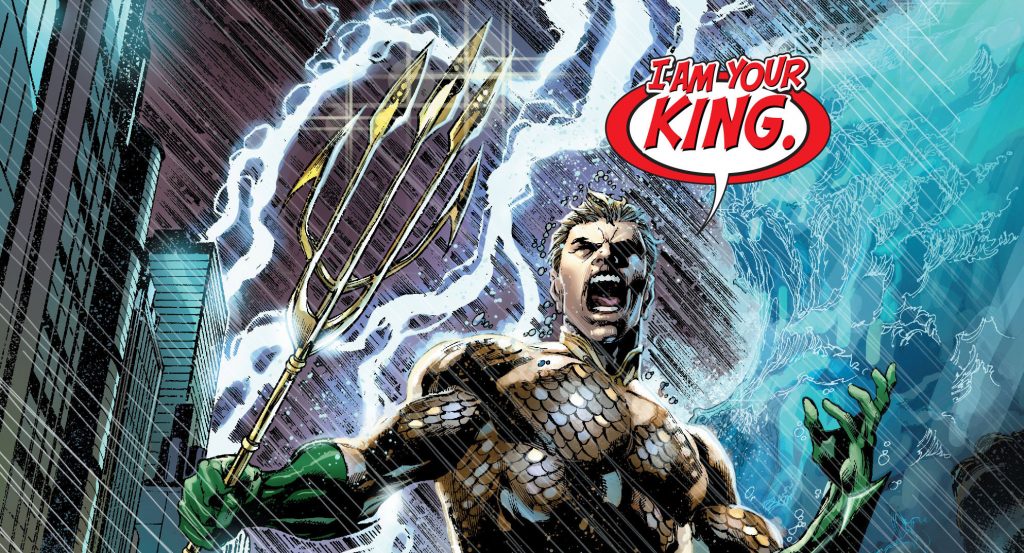 Justice League Throne Of Atlantis has a lot riding on it’s shoulders. Justice League Origin received a perfect 10/10 in my recent review and it’s sequel The Villain’s Journey didn’t do too bad either.

However, this is a book about Aquaman.

Yes I’m a bit of an Aquaman hater. Yes he has Sharks and stuff, yes he has a new haircut but he’s not..he cannot..ever be as cool as Justin Bieber (that’s a joke by the way).

The character is always slightly hit and miss for me. He’s like that nerdy kid at school who is sometimes cool but always vomits or pisses himself at parties, blowing it when he finally gets his big shot to be your best mate. Shame really.

I’ve read this book before and didn’t think of it too highly. However as I’ve been re-reading the New 52 run, books I once disliked have slowly become my favourite (yada yada yada insert another metaphor that doesn’t really work about a kid at school who pissed himself).

So, can this book deliver?

That’s what I’m here to find out!

So with that out the way, let’s jump into Justice League: Throne Of Atlantis.

Playing with a Cheetah

The book opens with Wonder Woman battling Cheetah. This is the first time we see the superhero at her most vulnerable and when she is bested it spells the end for her superiority. The team notice it too and the opening conflict comes from Wonder Woman’s brashness and refusal to accept help from others.

Whilst this is rather anti-feminist I think that it’s nulled slightly by the dominance that Cheetah has when battling the League. She over powers Superman and possesses him leading to an awesome face off.

It’s nice that the League accept Wonder Woman as an equal and it becomes a far cry from the ‘get in the kitchen’ heavy Wonder Woman tales of the 1950s. Eventually the team take down Cheetah and it’s unearthed that whilst she was once supposedly Wonder Woman’s friend it was in fact an act. This makes Wonder Woman lose her faith in humanity and only Clark is able to bring it back.

Their relationship goes from strength to strength in this book and we get a slight repeat of the kiss that ended the last volume. Their PDA has a breathlessness too it. A levity that really elevates it above the standard comic book love affair and this is one of the most breathtaking depictions of their relationship put to page. I love the way that Clark introduces the idea of a secret identity to Diana, explaining that Clark is his mask and in the process confirming both of their needs to still have normal life experiences outside of the capes and tights. 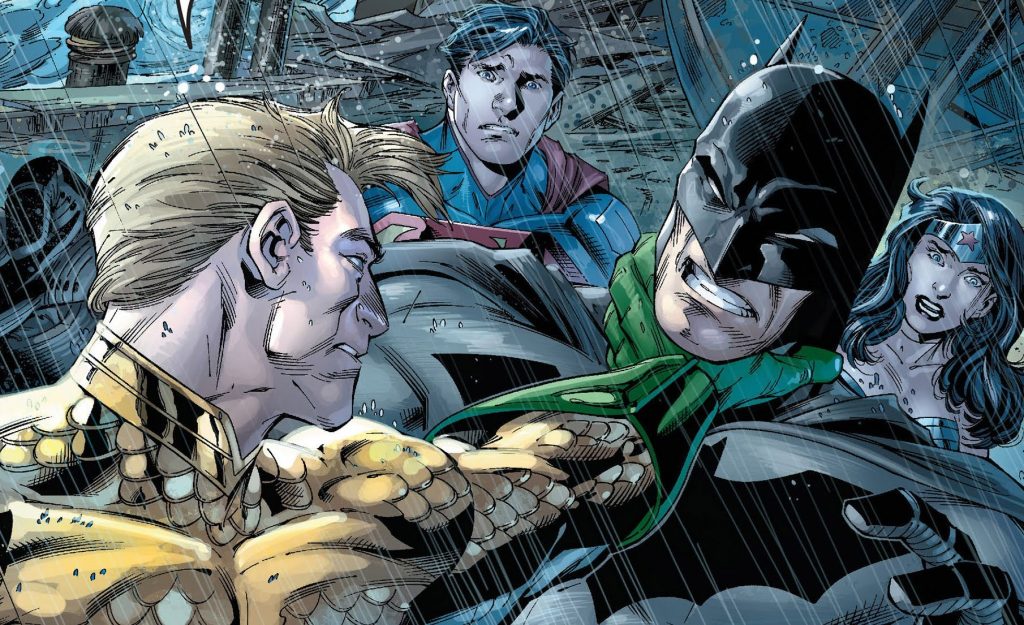 The main plot of the book begins when a US missile test malfunctions and the city of Atlantis is struck during the process. This causes the underwater metropolis to counterattack, flooding most of Earth’s major cities and in the process beginning a war between land and sea.

The tsunamis are terrifying. Metaphorically they work on a biblical level. Wiping the slate clean. Physically they act as a stark reminder of the darker side of mother nature. Bodies float in the casms and there’s an eerie feeling of familiarity to it all. I was given reminders of the recent Bangladesh Floods and the frailty of human life. It’s the perfect portrayal of the destructive force of nature that is presented beautifully amidst a comic book.

Truly harrowing from beginning to end.

Aligning with the Atlanteans

One of the conflicts within the book comes from Aquamans loyalty to the League juxtaposing his home of Atlantis. Torn between the two he must decide which represents him better and it adds to an insight into the characters psychology.

The sides present opposing ideologies but honestly, I found myself aligned with the Atlanteans more than the humans throughout this tale. We poison the ocean, murder fish by the millions and not to get too ‘vegan’ on anyone but we are responsible for a lot of tragedies on their end. YES I KNOW THEYRE FICTIONAL. But it’s interesting to think how Atlantis operates metaphorically as a stand in for the Middle East and Isis. Locations we have devastated and now are painted out as villains merely because they retaliate. 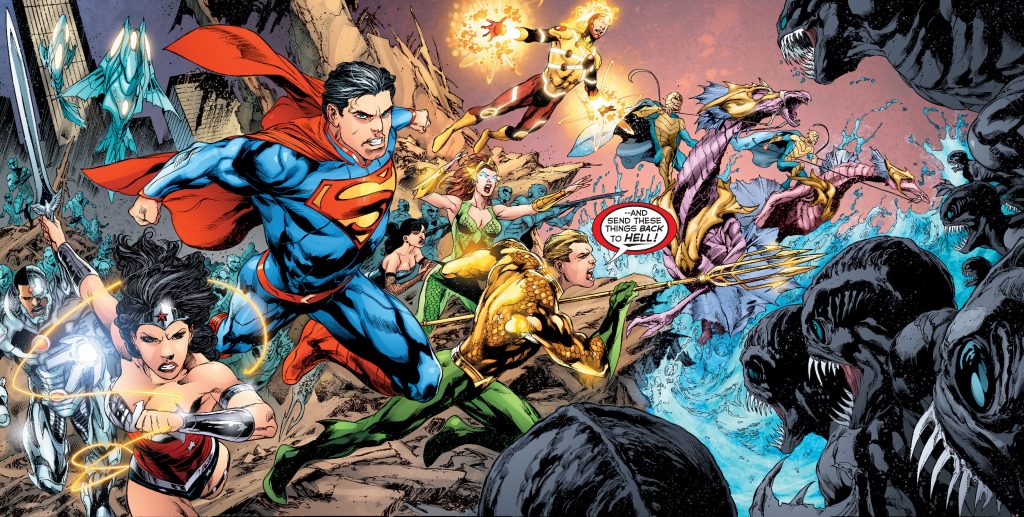 All out war breaks out between the Atlanteans and ‘surface dwellers.’ We get little Easter eggs for Doctor Morrow and the Metal Men (both of whom previously appeared in Justice League) and it acts as a satisfying conclusion torn straight out of your favourite action movie.

It’s the perfect end to the story that sees Aquaman taking his rightful seat on the throne. Cementing him as one of the Leagues greatest members and totally changing my negative opinion of him.

I had a lot of fun with this which is a rare thing of me to say about an Aquaman centric story. It may even surprise you too if you feel the same way.