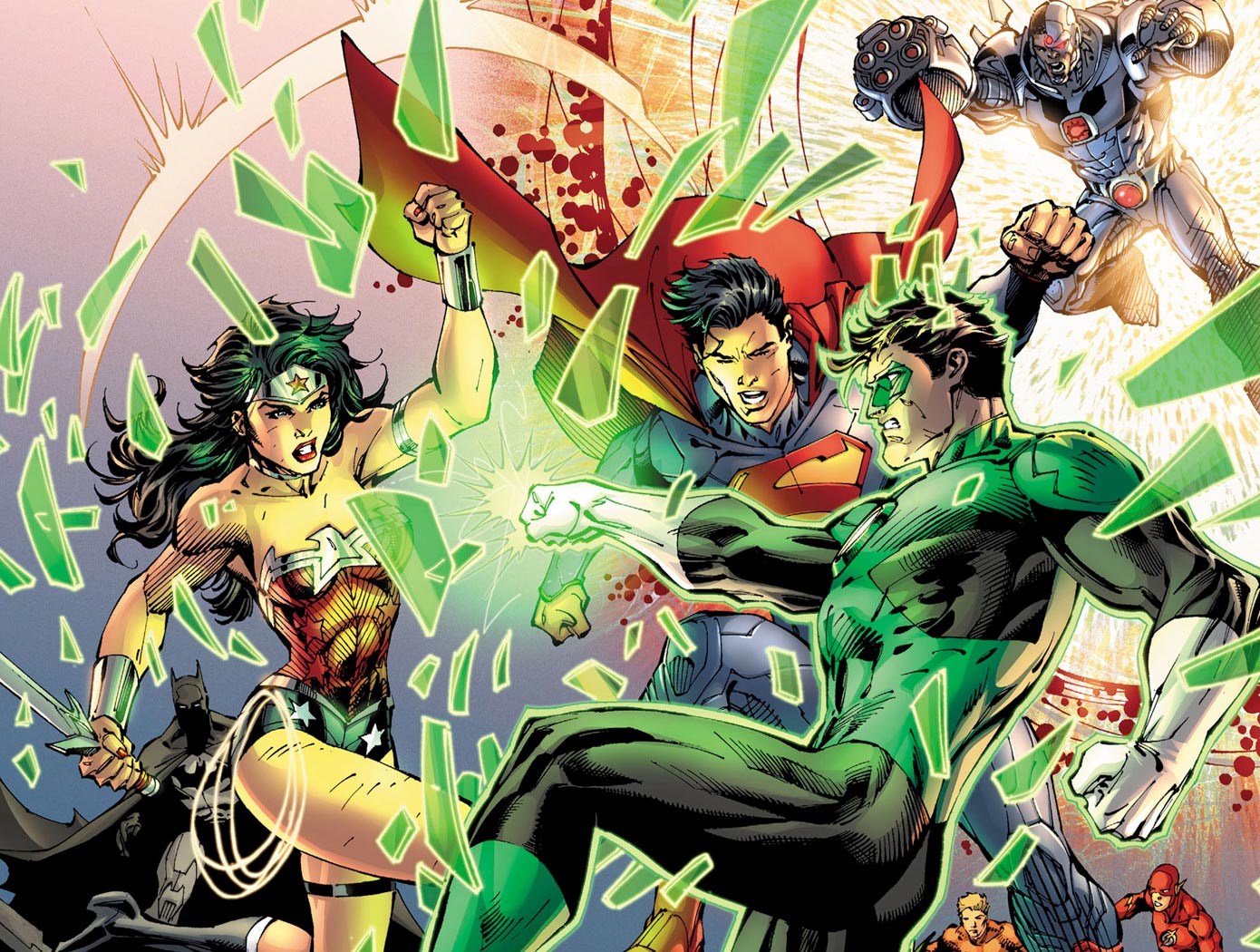 Justice League Origin scored a perfect 10/10 in my review of the New 52 stage setter for the team. To me it had it all. Drama, Action, Comedy and a kick ass storyline perfectly paced and illustrated. It was the complete all rounder that I couldn’t fault.

So naturally I’m very excited to see Geoff Johns and Jim Lee return with the follow up story: The Villains Journey.

I never delved too deeply into the League’s New 52 run but having been blown away by my retread of Origin I’m eager to dive back in.

So with the intro out the way. Let’s dive in to Justice League The Villain’s Journey!

The book opens with the League taking down a swarm of mutated parasites controlled telepathically by a giant grey monster. You know, the usual Saturday night. In all honesty I felt that this opening felt very ‘by the numbers’ but this doubt was quickly swayed by the introduction of Steve Trevor.

The government official is tasked with finding out intel on the League whilst at the same time balancing a relationship with Wonder Woman and facing public scrutiny. It’s very refreshing to see the general public criticising the government after seeing how well the League operate in comparison. Whilst the CIA, FBI and so on work in the dark, The heroes of the League are bright, bombastic and very public. Perhaps Johns is commenting on the shady way that the government conducts itself and operates in modern times and if so this book becomes more and more relevant by the day. Recently things have been brought to the light by people like Edward Snowden who has informed the public that the Government aren’t necessarily the good guys.

Johns wants the heroes to be the people who work in the light and the fact that he paints the governing bodies out as paranoid, fearful men isn’t lost on me. We should be looking for beacons of hope and questioning authority when it seems wrong.

However, Steve Trevor isn’t responsible for all the things that go on. He is a man, trapped in a world full of Gods amongst men and it’s interesting to see how he deals with acting as an Ally to the Leaguers and pleasing the ones he works for.

The Government realise that they need to have a plant within the team to monitor them. In what’s a hilarious issue we see Green Arrow try to join the group and fail, time after time. Each time gets more and more comedic and it adds a bit of levity to the book.

Overall this doesn’t integrate too well with the story (Arrow would end up joining the JLA instead) and this thread feels like a missed opportunity. It allows us to see that the Justice League is a very tight nit team but it felt slightly like filler. It seems like marketing within DC to launch the new sub series and it was the first real ding I gave the book. 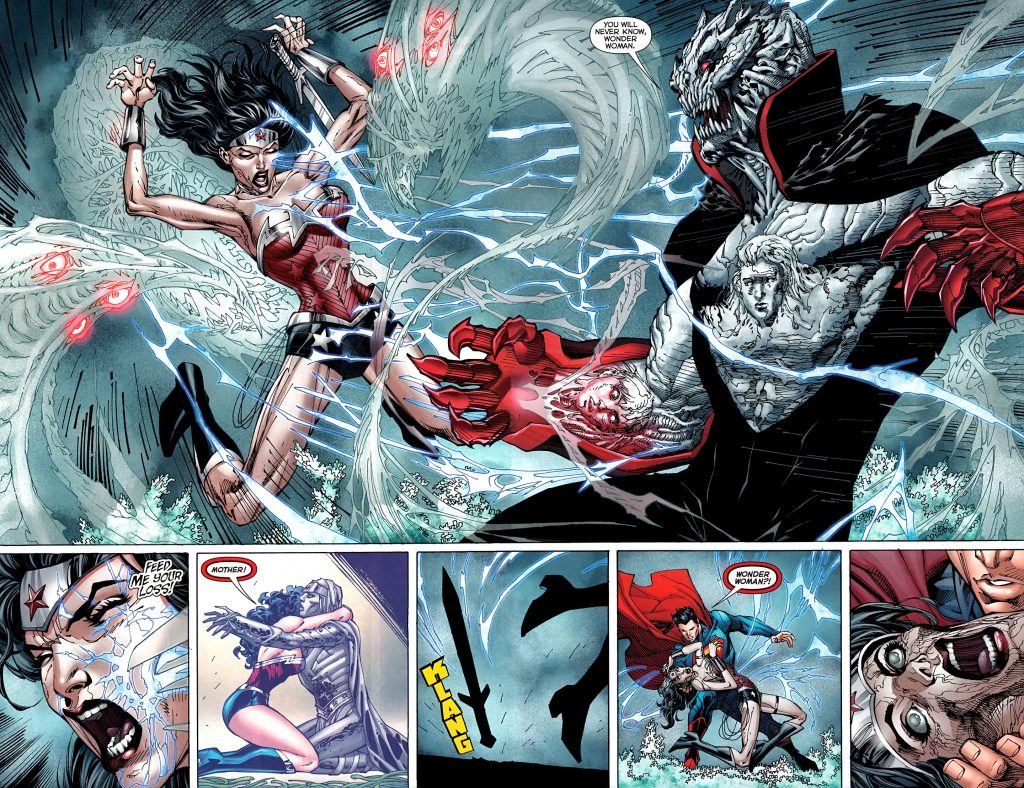 In a call back to Justice League Origin, David Graves, the author of the book ‘Gods Among Men‘ is gravely (excuse the pun) ill. Mad at the way the League has ignored his pleas after he praised and worshipped them he sets out on a quest for revenge. Ominously he has operated in the background, extracting everything that both friend and enemy of the league know about the group.

This puts Steve Trevor in the firing line.

It also makes the League question their own loyalties. Whilst their enemies know so much they realise they actually know very little about one another. It’s a really in depth look at the operations of a team of masked heroes and is something that I never really thought of myself. Why would Green Lantern, for instance, trust Superman. They know nothing of each other on a personal level and personality wise seem like polar opposites. It’s little things like this that make Geoff John‘s work elevated above the norm and definitely is a selling point of the book.

Unfortunately Graves isn’t as compelling an antagonist as the team itself. Transformed into a monster and encased in the souls of his dead family he never really lives up to the potential that he initially had. He was betrayed in some ways by the League and now seeks revenge but in doing so has lost his humanity…and also the most interesting thing about him.

Wonder Woman VS The Justice League

In a thrilling highlight we see Wonder Woman battling against all the members of the Justice League. Worried about Steve Trevor she lashes out when the group try and calm her down. The event is broadcast live by Graves in order to supply the general populous with doubt towards the group and it acts well both narratively and action wise.

It’s a really interesting fight that due to Jim Lee‘s artwork feels like the books standout moment. It shows that whilst they are united there are still chinks in the armour and elevates the villains plot so that it has more severity.

Eventually it causes Green Lantern to quit the team. He realises that the League are now in poor favour with the people of Earth and takes the blame, claiming to cause the fight in order to save face for others.

Up till now in the run I’d never really connected with Green Lantern too heavily, his jokes, whilst humorous, didn’t really endear him overall to me. However this move is brilliant on his behalf and really allows you to rally behind the intergalactic policemen. 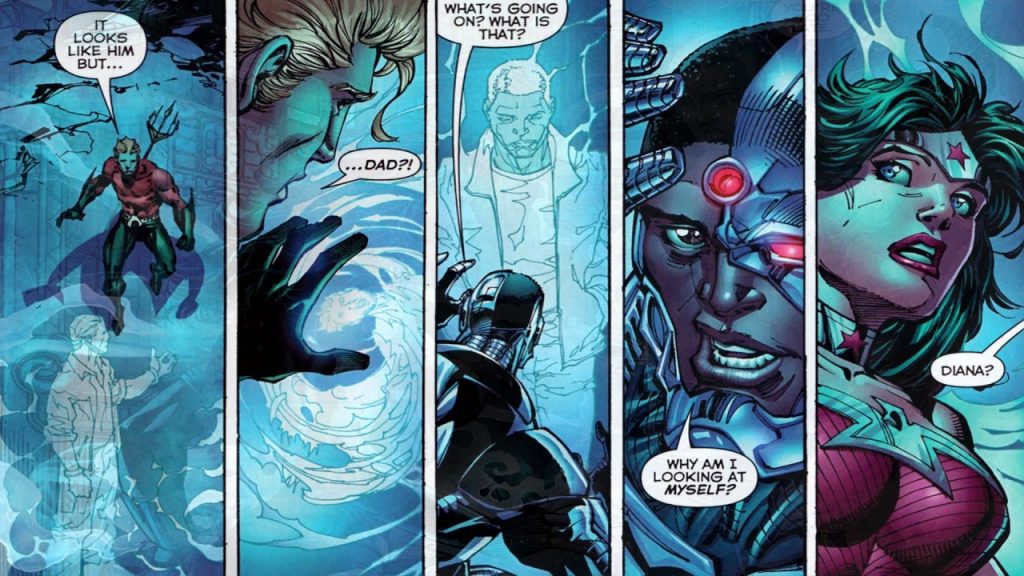 Facing off against Graves in the valley of souls we get an introspective battle that shows the inner conflict in each hero. It’s full of ‘Dead Parents turning up and saying they’re proud and that the hero should give up’ but it’s carried off a lot better than a ‘Martha’ moment. You know what I’m talking about.

One of the more intriguing of these is Cyborg seeing Victor Stone (himself) amongst the dead. The spirit taunting him that he’s just a machine who believes he is human. It’s a thought provoking moment that made me realise that perhaps Cyborg is just that and I love the ambiguous feeling that is left around the development.

It’s an awesome battle that ends on Wonder Woman breaking up with Steve completely. Realising that knowing him will forever put him in danger it seems like the heroic thing to do.

She then goes into the arms of Superman and the story ends on a kiss. I really liked this turn within the books, it makes perfect sense that the two gods would begin a relationship. They are the only two beings on the planet perfectly suited to deal with the situations that the League will put them in. Of course they would find common ground and it invests you in the stories to come without feeling soppy or cliched.

It’s a brilliant end to the book that feels like a natural conclusion in the second volume of the Justice League New 52 run.

Justice League The Villain’s Journey starts off rather average but slowly builds momentum to a brilliant climax. Similar to origin it gives every character a defining moment and feels like a progressive build towards what is to come down the line.

It certainly doesn’t match Justice League: Origin but what’s here is thoroughly enjoyable and feels like an adequate sequel.