Earth 2 The Tower Of Fate Review By Deffinition

Earth 2 The Gathering was pretty sub par. The book had the perfect opportunity to springboard from Justice League Origin and create a brand new, gripping world, without the super team.

It failed to deliver.

I went in expecting Injustice and instead I got an injusti….yeah you can tell I’m not putting as much effort into the puns these days.

Every volume is another chance to turn it all around (don’t know why I’m quoting Vanilla Sky in my article…perhaps it’s because the last book was so vanilla…YES!!! Saved it!). I’m really hoping that Volume 2 can deliver on that promise.

That promise of a new tomorrow…

With that out the way let’s dive in to Earth 2: The Tower Of Fate.

Trinity and The Traitor

The book opens amidst the Darkseid war, six years ago. Set all in flashback it introduces Terry Sloan. As one of the smartest men on the planet he realises that the Darkseid war cannot be won and betrays Batman, Superman and Wonder Woman. Pitting them against each other he sets off a bomb that causes the Earth to gain fire pits similar to Apokolips and flees to Earth 9.

I feel like this opener HAD to be here. DC are at this point probably afraid that fans may stop picking up the book should the mainstays be missing.

Which is a shame.

The opener proves that there are characters within this world that can leave the reader gripped and Terry Sloan is one of them. Becoming the new antagonist he seems to be extremely self interested and almost makavelian in motive. Travelling into the future to make sure he can plan for all eventualities is a cool trip and it certainly elevates him above the yawn inducing Solomon Grundy from Earth 2: The Gathering.

Unfortunately the plot they centre around him in Issue 2 is extremely hard to follow. Normally self doubt makes me think that it’s me who perhaps is too dumb to understand what’s going on but there are names thrown about here and motives that don’t really seem clear. Look, I’m trying to explain it and I can’t so yeah…it went over my head.

Issue 3 shows Steppenwolf’s invasion of Dherain, a fictional city (obviously) that aided Darkseid in the war. Joined by Wonder Woman’s daughter ‘Fury’ it makes for an action packed issue, even if it feels disjointed from the main plot.

The main issue that I had about the book at this point was that every story seemed separate and whilst it could be argued that it’s all building to something, it still didn’t fill me with confidence that there would be any real impact from the eventuality of each arc.

Just seemed like DC were throwing lots of shit at the wall and seeing what stuck. And in doing so making it so that we never have time to really get invested in the shit…I mean characters.

They’re rushed by so quickly that it’s only when we reach Issue 4 that we see a familiar face from the last volume for any substantial amount of time.

By then I didn’t care 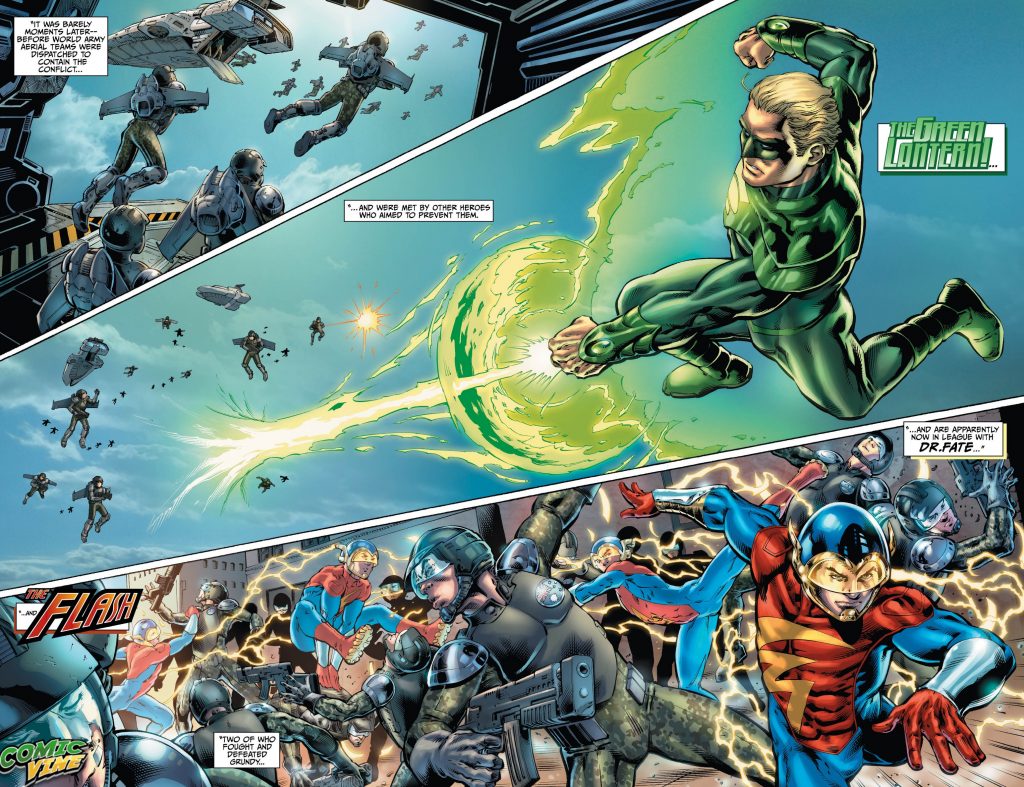 Jay Garrick returns home to see his mother, the government have been spying on him and the opposing sides face off in a laughably bad battle.

This was the fight scene that broke the book for me.

I burst out laughing reading this.

When the dialogue is this terrible it makes it very hard to get invested and take the characters seriously. It’s like something out of a Frank Miller book, post 2001, you know, when he started taking heavy doses of LSD*

I really don’t know how most of it made it past the editor.

It all makes sense now.

The editor of DC comics is Stevie Wonder.

How could have I been so blind (scuse the blind jokes) to this. It’s the only thing that makes sense for such poor, poor writing to make it to print.

“The mage of an organisation that seeks to augment its control of magic in the world by obtaining the power of Nabu’s that you consigned to the tower younder that only you can enter.”

“You’re going down.”
“No it’s you who are going…UPSIDE DOWN.” 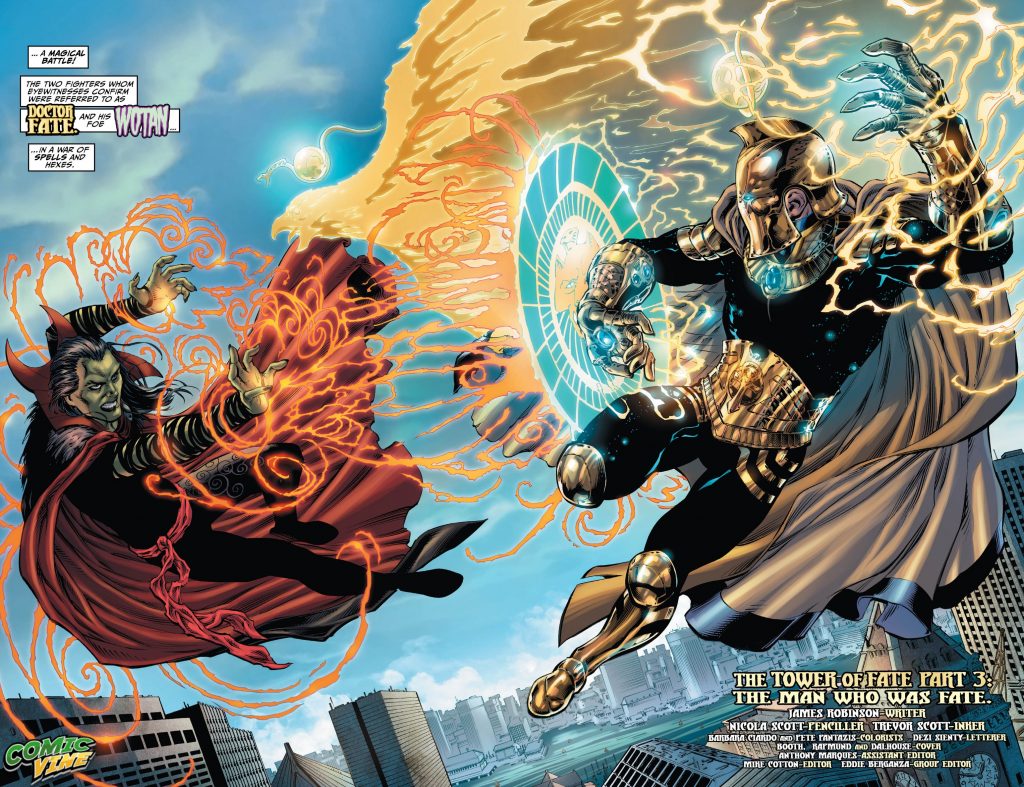 Is there a Doctor In The House?

The final couple of issues focus on Khalid, a newly introduced character (yet another one) and his taking up the mantle of doctor fate. If you’ve stuck with the review this far then congratulations, your interest has lasted longer than mine did with this book.

The final battle is a tiresome one that jumps about timewise. Using the old comic cliche of showing the middle of the fight then jumping back to ‘one hour earlier’ I found it hard to really care. When a book is this disjointed it’s hard to view it as building towards a climax. The dynamics swap from action to set up from one panel to the next and even the most dramatic scenes are Transformers The Last Knight levels at best.

They also throw in some sub story about Alan Grant‘s lover being targeted for murder before succumbing to his fate but this is dropped quicker than Soulja boy was from his record label after all his fans turned 13.

Honestly this book is terrible. I have had an allergic reaction to this shit as I am now depressed, suicidal and have the feeling of going genocidal on the entirety of Earth 2. The stories are completely separate to one another, provide little drama and all feel like set up. If I had confidence that the writer could deliver on a worthy pay off down the line I may reward this book higher. Alas I don’t think they can.

Earth 2 Tower Of Fate is not worth your time or money. Like the Helm Of Fate it should be locked away…in a tower…you know what? I can’t even be bothered to put in the effort to end that metaphor well as I would be showing more care for this book than I think the writers even did.