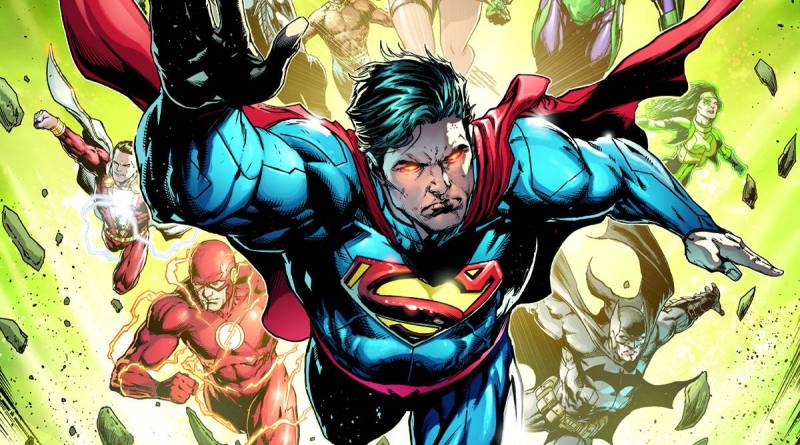 Whether you liked it or not, Forever Evil shook the DC Universe in a big bad (or good) way. Watching the Evil Doppelgangers run riot on iconic locations such as Metropolis and Gotham was a joy and I absolutely adored the book and all of its set up. The storyline wrapped up beautifully and it was in my opinion by far the best New 52 crossover arc thus far. However, one question still remains.

What will happen to The Justice League now?

Here to answer that is Justice League: Injustice League. In a league of its own for how many times it uses the word ‘League’ in its title, it will be interesting if it can capitalise on the climax and bring our heroes (and villains) back better than ever before.

There is a lot riding on this now that the main storyline is out the way and it has the potential to land on either side of the fence. So with that out the way let’s dive into Justice League Volume 6.

Due to the events of Forever Evil, Lex Luthor has been labeled a hero and is worshipped worldwide. The ex-supervillain is lapping up the publicity and loving every second in the spotlight. Scrutinised by the League, our heroes question whether a leopard can truly ever change it’s spots and this thematic dilemma thrusts the plot forward throughout the book. Luthor passes all interrogations thrown at him (even when bound by the Lasso Of Truth) and it appears that we can welcome a new Superhero to the World Stage.

Mirroring this we follow the Power Ring’s journey to find a new bearer. Severed from the hand of it’s previous owner in Forever Evil, this subplot tells the tale of Jessica Cruz. Locked in her apartment she is an agrophobe that is afraid of her own shadow and when the ring states she has been chosen to annihilate the Earth, things don’t look good.

Both storylines are a blast to read and I loved the constant second guessing that the book gave me. Huge plot points are dropped early on such as Lex Luthor knocking on Wayne Manor, asking to see Batman, and the book kicks off the second act of The New 52 in astonishing fashion. Breaking the mound it brilliantly begins one of the most intriguing storylines thus far and John’s should be applauded for his creativity in this introduction. 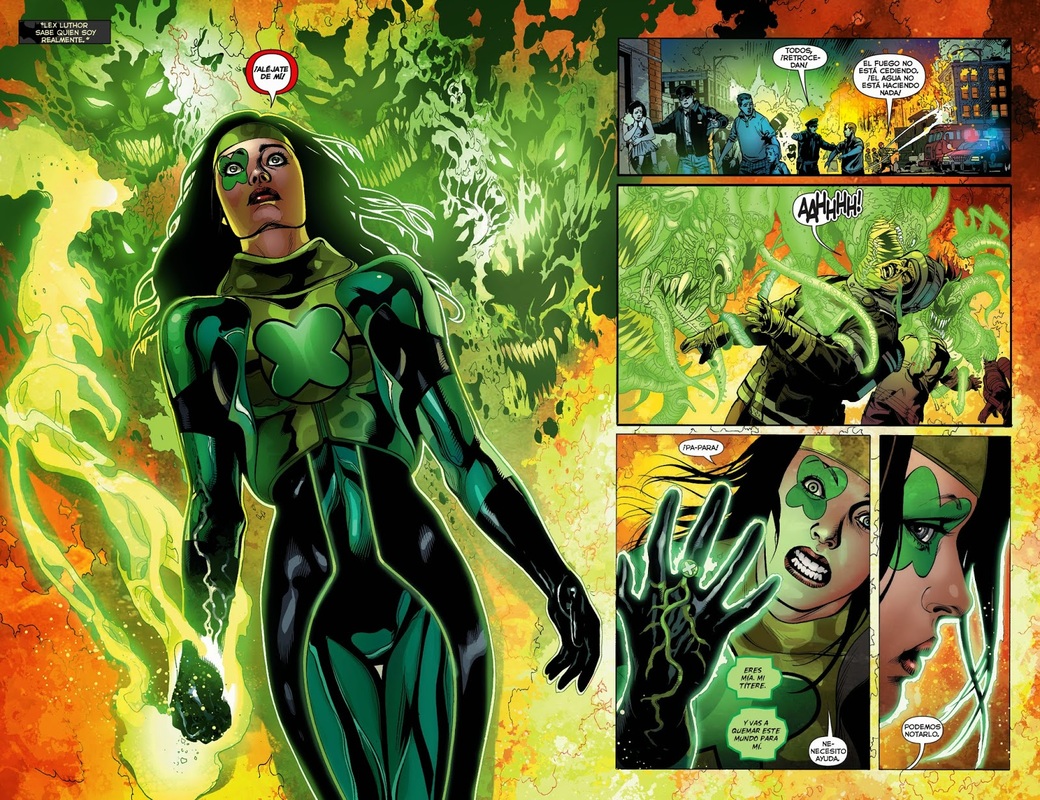 Making a grand entrance we see Power Ring take on The Doom Patrol with The Justice League caught in the crossfire. It’s a brilliant way to introduce the new Lantern and elements of the action tease what is to come down the line, making for a gripping read. Tackling the new Girl in town head on, Batman by makes her confront her fears and face up to everything that holds her back. It’s a cerebral way to face off against a foe that once again cements the League as the best team in comic books.

Mirroring this the team realise that they need to think outside the box in order to tackle their other problem, Lex Luthor. They gamble and enlist the megalomaniac into their ranks and there are some brilliant trade offs as Lex learns first hand what it takes to become a superhero.

Of course he struggles to fit in and a lot of the drama comes from his inability to accept the league and their methods. The book is a real page turner and the action is aided heavily by the fact that Lex’ duplicitous nature could destroy the team from within. The pace is phenomenal and when we discover that Lex has sought help from Owlman the graphic novel becomes impossible to put down even if this plot point doesn’t get a resolution here.

During the merger of Wayne Enterprises and Lexcorp a plague is unleashed upon Metropolis: The Amazo Virus. After rendering the majority of the Justice League in critical condition, Lex and the remaining members must learn to put their differences to one side and work together. It’s more of the standard affair that we’ve come to expect from mainstream League stories but there is enough good here that readers will have a fun time with it.

Things aren’t as easy as they seem and as expected the spanners are thrown in the works throughout. The dormant disease mutates within our bed ridden heroes, making them rabid and on the war path. In the book’s finale we see Lex, Superman and Wonder Woman face off against the infected team members. Admitting that he infected Superman with the Amazo Virus four years ago, he is finally able to manufacture a cure, even if the revelation does fracture the trust and goodwill he has built thus far.

Ending the book with Lex saving the world once more it feels like the character has had one of his best arcs ever and the storyline teases enough of what is to come to leave you wanting more. Onto Darkseid War. 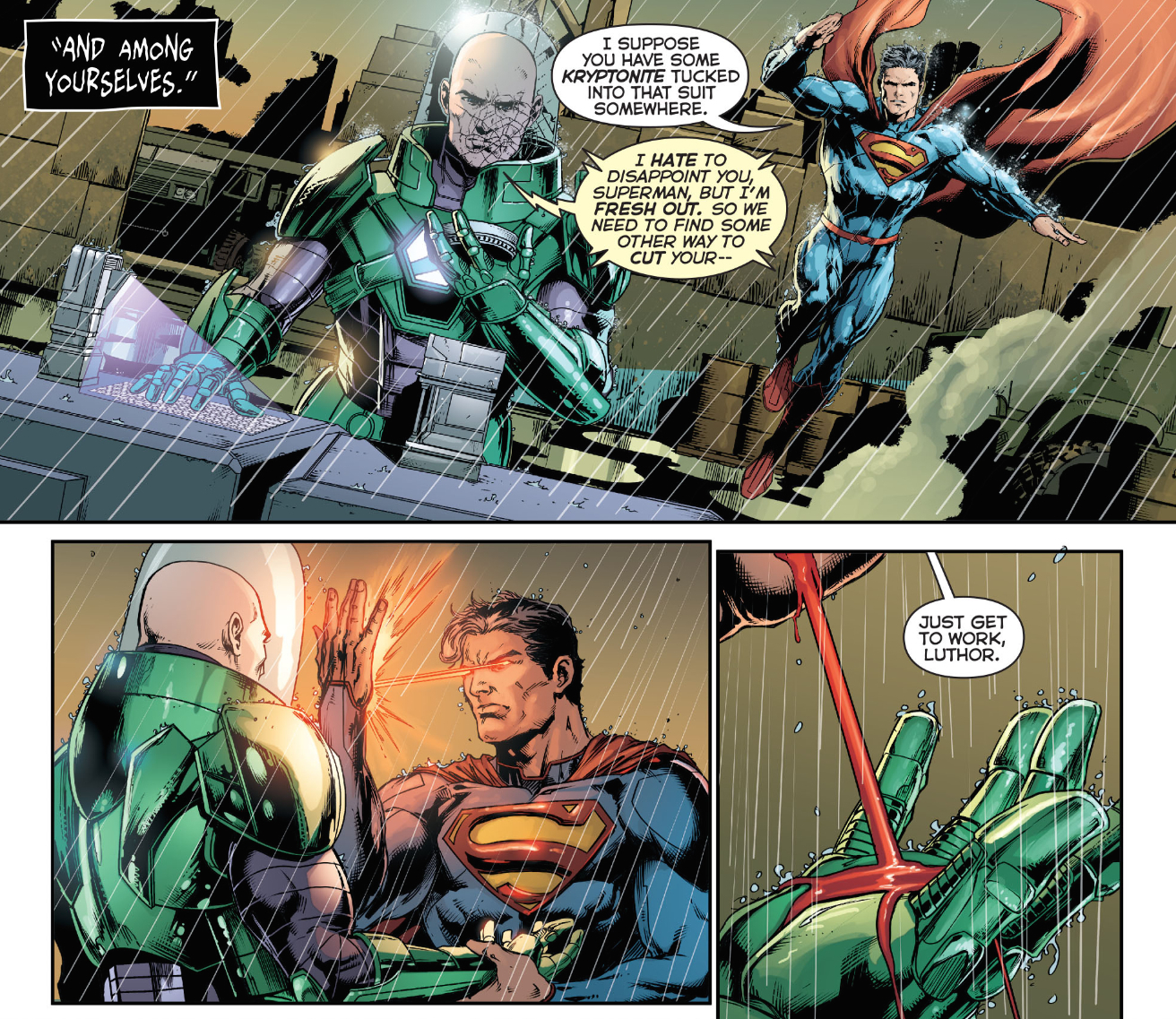 Justice League: Injustice League is one of the best League stories that the New 52 has to offer. Diverting from the cliches it innovates by introducing new members and redefining character arcs. The book beautifully picks up the threads left at the end of Forever Evil and capitalises on them in an astonishing way. Injustice League is a great first outing for the new and improved Lex Luthor and I can’t wait to see what there is to come down the line.

That’s why Injustice League gets an…