Insert a mole in the Justice League. Check!

Getting down (literally) the Watchtower. Yup!

Set both Justice Leagues to fight each other. Check!

Taking down both Leagues in one single strike. Checkmate.

The world is in the hands of the Crime Syndicate.

After making their grand entrance in Justice League: Trinity War, the inter dimensional super villains have quickly become some of my favourite characters in the New 52 run. As complex as they are charismatic they present an alternative vision of the DC heroes, showcasing what they could become should they ever be corrupted.

I’ve read Forever Evil before, however, I wasn’t caught up with the backstory of the book and went into it with zero prior knowledge. I thought it was over hyped and due to not understanding the storyline, I didn’t really get the context behind most of the events. I disliked it and sold it.

Now though, I’m happy to say I’m fully caught up and really looking forward to giving the book a second chance with my ignorance no longer holding me back.

So with that out the way let’s dive into….Forever Evil. 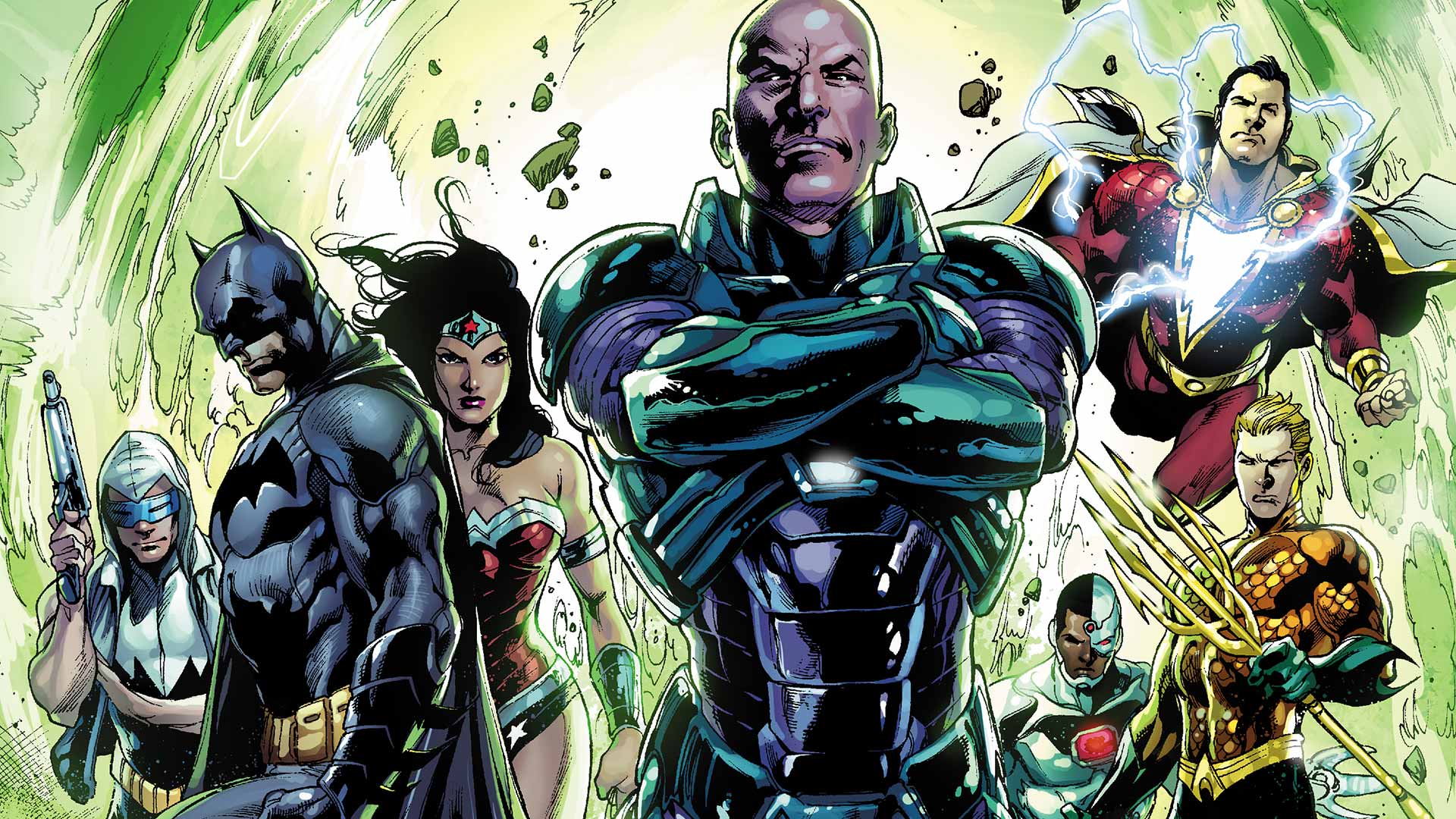 We open on Lex’ industrial takeover of Kord industries. Ruthlessly threatening the owner with the death of his family should he negate on their deal, he’s as villainous as ever. At it’s heart this book is a story about the redemption of the megalomaniac and it’s great to see him at his most twisted in this opening segment. When his helicopter is struck by an unknown force he comes to the realisation that a higher power is now controlling everything.

The Crime Syndicate have arrived!

In the opening issues, we are slowly introduced to the rest of The Crime Syndicate, they break open every super prison in the world and hold a grand meeting with all of the criminals. In what is one of comics most memorable moments we see a legion of villains bow down to the new Anti-Justice League. Almost looking like a ‘Where’s Wally (or Waldo if you’re in the States)’ it’s hard not to be taken back by how much effort the artists have put into this piece.

There is King Shark, Deathstroke, Cheetah, Hugo Strange, Bane, Killer Frost, The Penguin and Two Face, just to name a few. The piece immediately pops and puts the piece on a pedestal artistically. Being bad has never been this good.

It feels like the first time (in a long time), where the Super-villains have really won, they are a united force, unstoppable and ready to make all of their sadistic dreams come to fruition. It raises the stakes to a brilliant level and as a reader I was completely invested in the situation, ready to see who would rise up and stop them. Which is where we are introduced to our team of “heroes”. 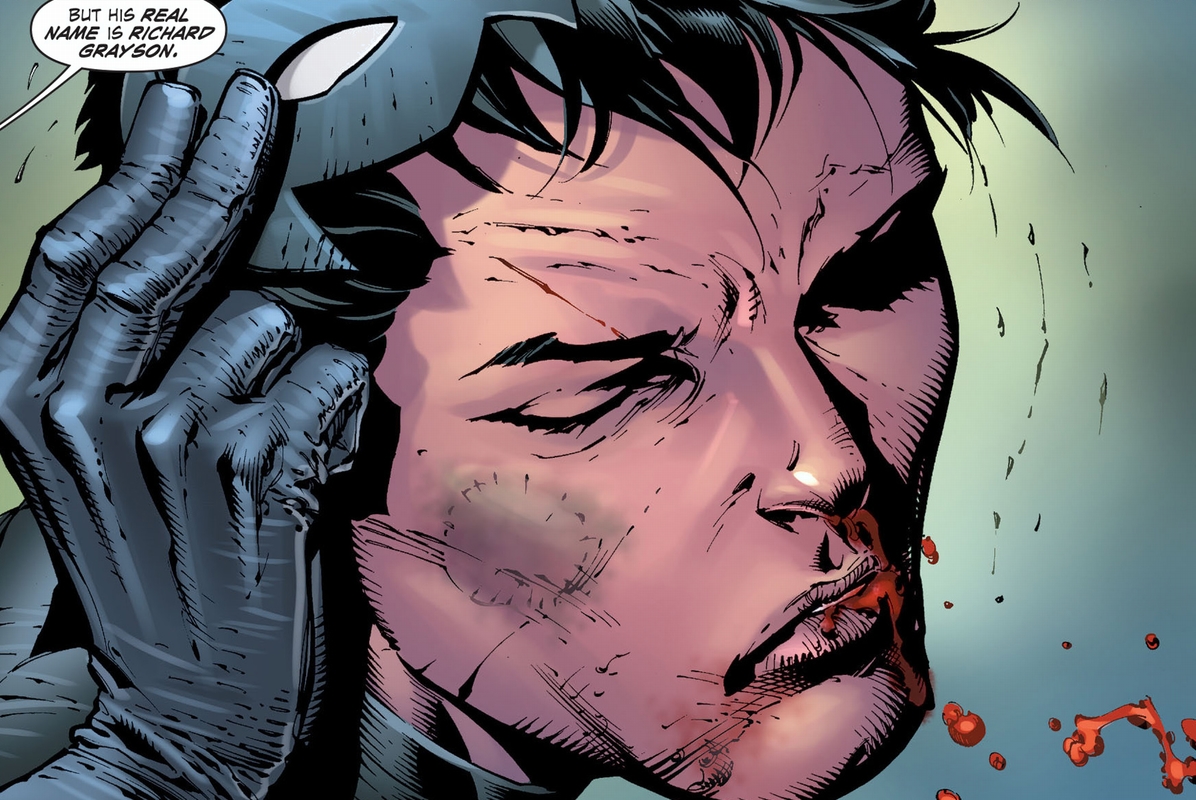 The Death Of Nightwing

At this meeting the Crime Syndicate reveal Nightwing’s true identity to the world. Stripping him of his mask it feels like a bold move to take creatively and the book really feels like it has consequences.

Of course Dick Grayson would go onto become Agent 37 (had to double check that it definitely was 37 and I wasn’t confusing this with the Hitman series). A stellar arc that really changed the character in several ways. With this hindsight the reveal slightly loses it’s impact but there is still enough drama here to keep you gripped to the page.

“Survival Of the fittest”

I love how relatable the Crime Syndicate’s view of the world are. They state that we counteract evolution by protecting the weak, claiming only the strongest survive. It’s an ideology that’s easy to relate to, we live on an over populated planet and there are strong political campaigns that revolve around the fact that few contribute and still reap the benefits.

It’s what makes the Crime Syndicate so dangerous. They are so alluring and possess the power to act upon their wickedest desires. The idea of ‘survival of the fittest’ is discussed and dissected throughout the book and it’s great to see even in the subtext their is a battle waging between right and wrong.

Whilst appearing merely as run of the Mill Super villains, they actually have a lot that makes them relatable. It’s one of the main reasons we have seen the team be used in countless stories over the years and this is one of their best appearances. 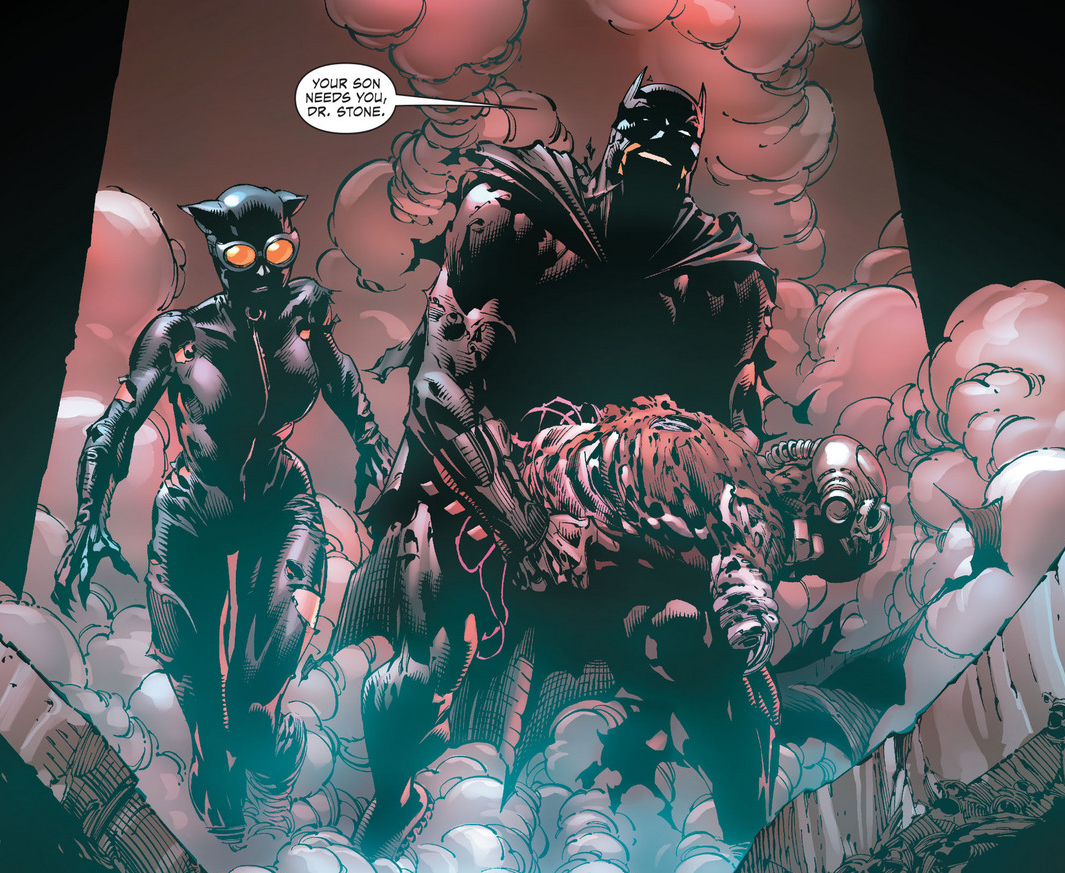 Dragging Cyborg’s body back to S.T.A.R. Labs, Batman Returns. Surviving the attack by the Crime Syndicate, he and Catwoman have had to lay low whilst the world was overrun. They are back…and ready to fight.

Mirroring this Lex Luthor unleashes his Superman clone, B-Zero (who ofcourse becomes Bizarro), born 5 years premature, he is a mere shell of the man. I absolutely love this introduction of Bizarro, even down to him putting a Superman shirt on backwards so that the “S” is flipped, it’s inspired. In his new Mech Suit, Lex and the Superman clone meet up with Captain Cold, Black Manta, Black Adam, Deathstroke, Catwoman and the Caped Crusader. As a unit they attempt to wage war!

Feeling like a true underdog fight, I love the way that Geoff Johns depicts ‘the heroes.’ All of them possess a darker side within. The war that they wage on the Crime Syndicate is mirrored by the inner turmoil they feel balancing their morality between light and dark. Working on a metaphorical level the book has true depth to it and each character feels like they break the mould, making for a refreshing read.

Fighting to a stalemate the heroes free the mysterious Prisoner that has been held hostage at the Crime Syndicate’s base. Stepping forward we see the return of Alexander Luthor. After disappearing at the end of Crisis on Infinite Earths, I was curious about what had happened to the alternative version of Lex and this is a welcome return.

Possessing the power of Shazam, he mercilessly murders most of Crime Syndicate’s ranks and in doing so reveals a traitor amongst them.

Playing Ultraman and Owlman off against one another, Superwoman has secretly been in cahoots with Alexander Luthor all along. Pregnant with his child she has planned to destroy the Crime Syndicate herself.

Unfortunately the finale really fails to capitalise on this and the duplicity is never really brought up to truly wreck the team. I really wanted to see a final battle between Owlman and Ultraman but for some reason this is missing from the storyline. The pregnancy ties in very little to the overall action and all it boils down to is a fight scene between the heroes and Evil Luthor (eviler Luthor).

As he possesses the same voice as his evil counterpart, Good Luthor is able to call down the Shazam lightning and depower his doppelgänger. He kills him, the Justice League are returned and Atomica gets stepped on.

Which I must admit is brilliant. It’s great seeing the character who caused all this go out with a splat. 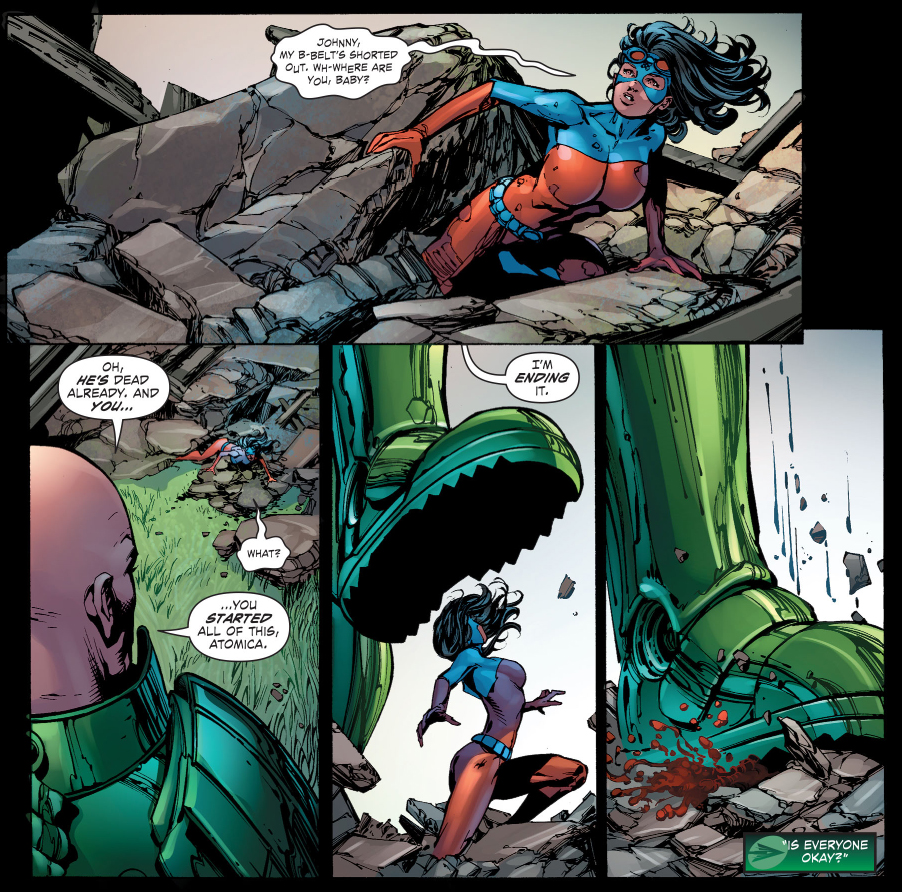 Good In Us All

The epilogue of the book sends the cast off in a somber tone. Reflecting his industrial takeover at the start, Luthor drops his deal with Kord industries, allowing Ted Kord to become the owner. It subtly hints at the revelation within Luthor and signifies that the experience has changed him for the better. I love the way that the book had come full circle and demonstrated that when called upon, the good within us all overrides the bad.

Forever Evil is a breath of fresh air. No longer relying on the typical team to save the day it allows the most unlikeliest of us to become heroes.

Whilst I wish we had more focus on the dynamic between the Crime Syndicate it could have potentially overstuffed the plot. There are huge revelations here and some character defining moments that really elevate the work. Whilst it doesn’t deliver fully upon the potential that it could’ve had the book still has a lot riding in it’s favour.