Skip to content
Injustice: Gods Among Us: Year Two: Volume 1 Re...

Injustice: Gods Among Us: Year Two: Volume 1 Review By Deffinition

Injustice Year One was incredible. There is really no other word for it. Beautifully deconstructing the DC universe it managed to pit two of comics most popular characters against one another in an enthralling way.

Following up on the success of the first year is Year Two: Volume 1.

With the bar set so high by it’s predecessors, it will be interesting to see if this storyline can match up and deliver on the hype. As always this review will contain spoilers so it may be worth giving this a miss for now until you have time to read the books.

With that out the way, let’s dive into Injustice: Year Two: Volume 1!

Death of The Green Arrow

Opening on a flashback of Green Arrow when he was still alive, we get to see the relationship that he used to have with members of the league before they became The Regime. It’s a bitter reminder of how things used to be and really tugs at your heartstrings before catapulting us to present day and his funeral. Upon learning that Black Canary is pregnant we get the books first sucker punch and from then I knew that this was going to be another classic.

The opener is awash with heavy moments such as Commissioner Gordon discovering that he has cancer, Bruce dealing with his paralysis and Kyle Rayner’s death at the hands of Sinestro. Because of this the graphic novel instantly grabs you.

Following the Government’s attack on The Regime, the group decide to remove them from all control. Holding Congress hostage they rewrite the law so that the US Government is unable to rule over the citizens of the country. It’s a bold move and one that speaks volumes to the deeply intertwined political aspects of Injustice. A staunch attack on democracy, it subtly shows how dictatorial Superman is becoming and I love the way the story allows you to draw conclusions in regards to what could happen later down the line should the character remove all governments from the planet. This is unnerving to see and when it draws attention from The Guardians, the stakes rise exponentially.

Taylor beautifully ties The Man Of Steel’s motives with his origins and it was gripping to see the superhuman express how Krypton could’ve survived had leaders like him been in charge. It’s a stance that I aligned with but one that The Guardians don’t and it starts the first real major superpower vs superpower battle that the storyline has had. 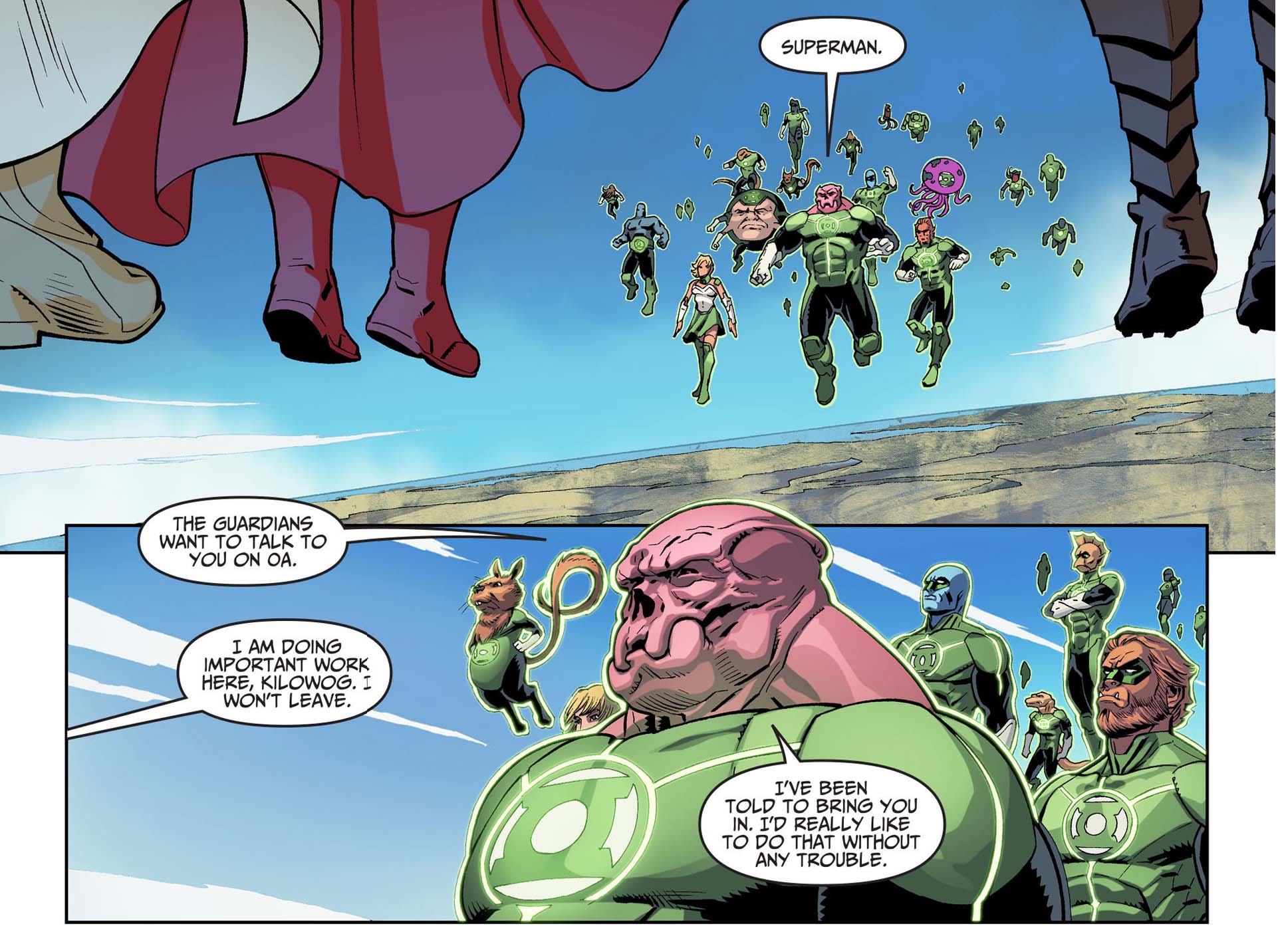 The finale of the book revolves around the Green Lantern Corp attempting to reprimand Superman. It’s a brash climax that devolves into all-out war and sees some villains that you would never expect joining the regime.

I loved it and the drama that is interlaced beautifully teases the next chapter, making me hooked yet again on Injustice.

Injustice Year Two continues the consistency of the series. It’s a brilliant mix of action, drama and politics. Those who are invested in the series already will find a lot to love here and those who aren’t will probably view this as a gateway drug into the universe.

It’s an incredible book and I definitely recommend that you pick it up. That’s why it gets a remarkable…