Injustice Gods Among Us has quickly went from my favourite comic book series ever to one of the most disappointing.

This all came due to a change in writer and in all honesty I feel like this has massively derailed the work from the potential that it was heading towards.

Here with his third attempt is Brian Buccellato. A writer who, though I have enjoyed on other works, has been unable to grasp what makes Injustice great.

There is always room for improvement and I must say that his run is slowly getting better.

But will it be enough to save the series?

For everyone else let’s dive into Injustice Gods Among Us: Year 4: Volume 2.

The book picks up in the aftermath of the battle do Wonder Woman and Superman that rocked the prior graphic novel.

Zeus is here now and the world must deal with the fact that literal gods of myth walk among us. They decree that Wonder Woman must join the insurgents and with her now forced to be at Batman’s side, there is a wealth of things that could go wrong.

It’s a pretty solid opener in comparison to the prior works by Buccellato and it starts the story off on a strong foot.

Several characters are killed and whilst normally they would be dead for good, we actually join them in the Ancient Greece underworld, Hades, and see how they attempt to return to the land of the living which diversifies the story from the usual Injustice aesthetic that feels bland by this point.

See You In Hades

Down in the depths of hell, they are able to come face to face with none other than Ares himself who reveals that he has been playing both sides off against each other.

Whilst this reveal should have come with some gravitas to it, unfortunately, the conversation quickly devolves into action and thus a lot of the dramatic tension is lost.

It’s cheapened highly by how the characters trapped in hell escape and overall it feels very underwhelming for what should come as a huge gut punch.

The heroes quickly return to Earth to witness much of the same mind-numbing action that has bored me senseless since the change of writer and Injustice once again falls back into its old routine. 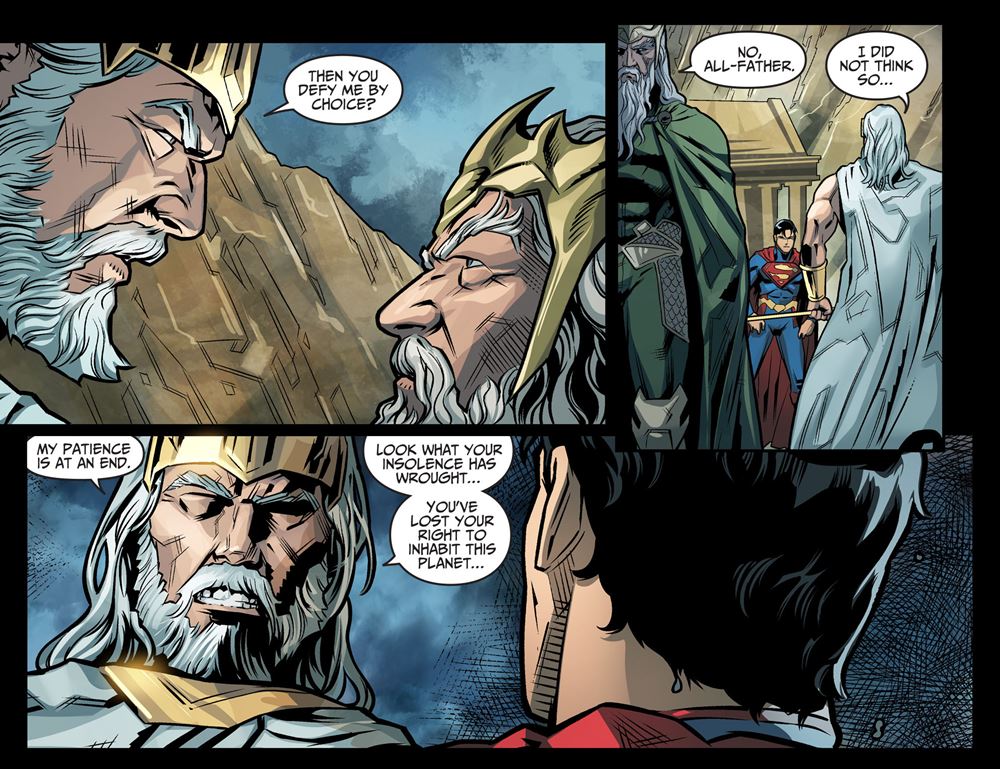 Welcome To The Darkseid

From here they learn that Darkseid has been behind the entire thing in an attempt to destroy Earth. However, rather than using any wit or strategy, Superman simply flies straight to Apokalips in order to have a punching match with the big bad DC Villain.

As you probably guessed, it strips the work of any real stakes as it something that we’ve seen 100 times before and feels plodding and predictable in a way that had me yawning throughout.

Once again this fight leads to a stalemate and Injustice once more shows that it’s no longer willing to take any risks.

Initially, this was a comic that made its name from neck-breaking twists, huge death scenes and dramatic politics. However now it’s happy having fights with no real consequences and thus as a run, it now feels very lacklustre.

In contrast, the book does once again pick up upon the disappearance of the Old and New Gods. This allows the showdowns to simplify back to Batman and Superman and it feels like a much-needed change of pace that once again gives the storyline focus and drive.

And then comes the introduction of Plastic Man. Whilst he is normally one of my disliked characters in the DC universe, credit where it’s due, the handling of him here is superb.

After breaking into the prison where the supervillains are housed, he sets them free all in an attempt to save his son.

It’s a really gripping way to end the graphic novel and it saved it from becoming another dud in the run.

If the rest of the book had been like this then we would’ve had another classic on our hands. Whilst it doesn’t reach that level it’s still enjoyable and has me curious to see what could come next.

Overall, though this was a pretty mediocre entry, it is nowhere near as bad as the prior book and thus it does have a slightly positive outcome.

This isn’t enough to save the series at this point but it has put it back on track so I am excited to see what’s next.