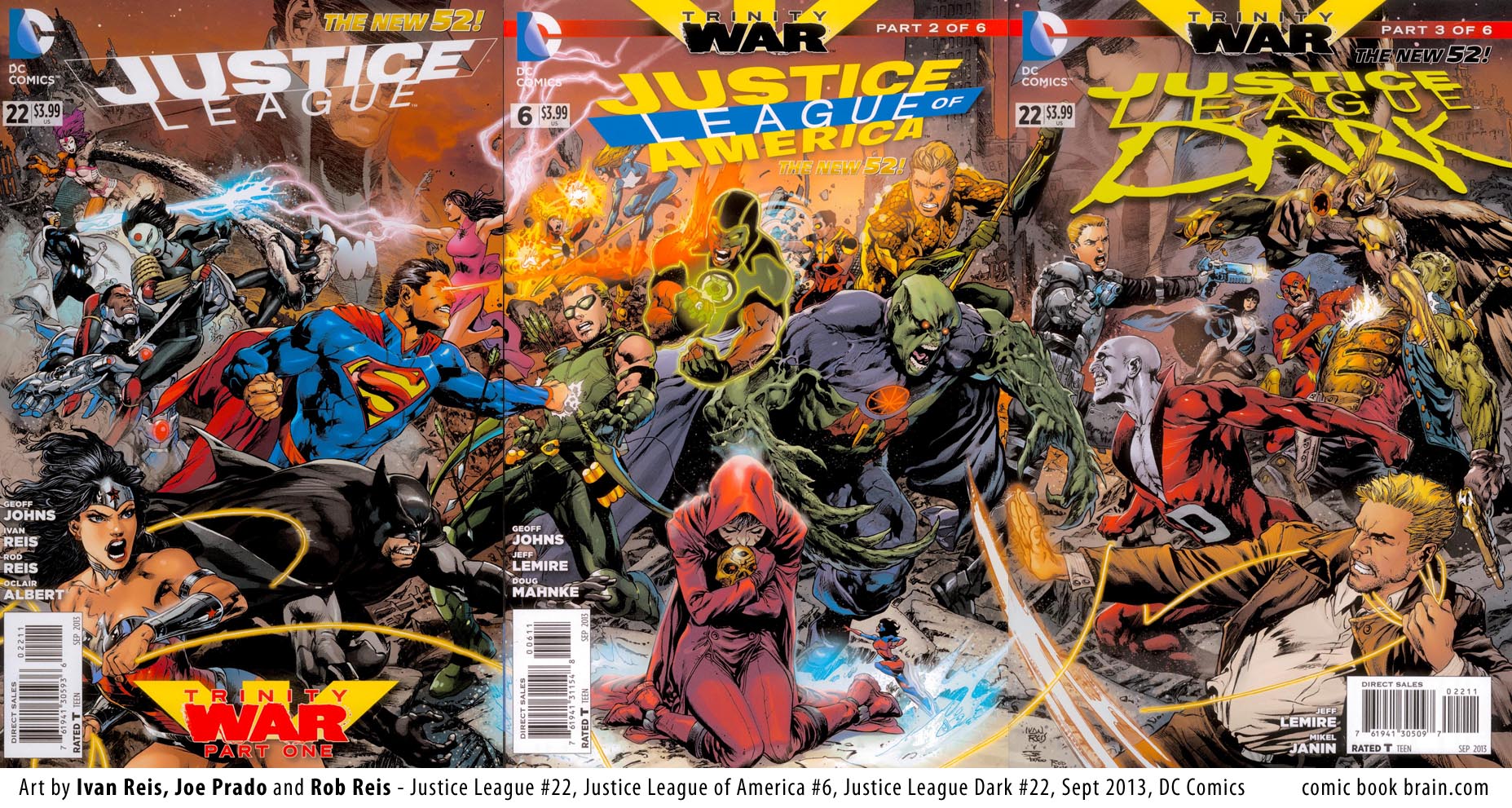 Justice League: Trinity War has a lot riding on it. Teasing Pandora and the Phantom Stranger in Flashpoint and The Epilogue Of every JL Volume thus far, DC are now putting all their chips on the table.

I’ve never read Trinity War but I’m really excited to jump into it after the setup provided by Justice League: The Grid. However, Mega events can be hit and miss, either living up to the hype or being more disappointing than Batman V Superman after you waited for it since 2001 and you bet your entire house on it being a fresh on Rotten Tomatoes but then you seen that early review by MARK KERMODE WHO SAID IT WAS THE BIGGEST LOAD OF SLOP EVER AND IT COMPLETELY CRUSHED YOU SO YOU RIPPED ALL YOUR BATMAN POSTERS FROM YOUR WALL AND CUT YOUR TERRIBLE BATMAN SYMBOL TATTOO OFF WITH A RUSTY KNIFE GIVING YOURSELF BLOOD POISONING….but I digress.

It will be interesting to see whether it lives up to the hype or it should be torn apart in a dark alley…like Pandora was…in Rebirth (spoiler alert).

With that all out the way, it’s time to jump in to Justice League: Trinity War.

The Lord Of Pandora’s Box

Opening millennia ago on the magical trial of three sinners, the book adds a grandeur to each one of it’s key characters. Cast out, Pandora, The Phantom Stranger and The Question are sentenced to walk the Earth alone. We travel from 8000 BCE to modern day, watching as the seven deadly sins unleashed from the Box ravish the Earth. We learn of Pandora’s mission to encase the sins once more and be rid of her curse and from the off, she becomes the central character that we follow.

It really has a ‘Fellowship Of The Ring’ vibe to it. The exposition immediately steeping the rest of the book in mystique.I absolutely loved this aesthetic and it allows the task that the heroes have in present day to be that much more important.

Finally arriving at modern day, Pandora realises that only the strongest may wield the box and she seeks out the best of us, Superman.

When Superman is unable to control the box it seems like all hope is lost. Carrying over from their campaign in Justice League: The Grid, the JL are now in Khandaq, restricted territory. Tasked with bringing them in, Steve Trevor arrives at the scene with his band of heroes and there’s a brilliant battle that really helps to break up the exposition-heavy plot we’ve had thus far.

I love how Geoff Johns is perfectly aware of pacing, never staying on a plot element long enough for it to become tiring the book becomes a breeze to read. He offers something for everyone and the balance that he develops between drama and action is astounding.

It was better in the book

Believing that he killed Dr. Light, Superman hands himself in, ending the fight. It’s gripping to see just how torn up the Man Of Steel is about the apparent murder and it adds a nobility that is rarely shown in comics.

Often heroes murder by the hundreds in their silver screen incarnations. Being so popular the public tend to overlook how contradictory it is of a hero to also be a serial killer, so it’s great that at least in the source material, comic book heroes scrutinise themselves. The fact that they show guilt and remorse adds to their depth and makes the reader gravitate towards them more.

Even Superman isn’t perfect and this makes him much more relatable than the often one-dimensional cinematic depiction. 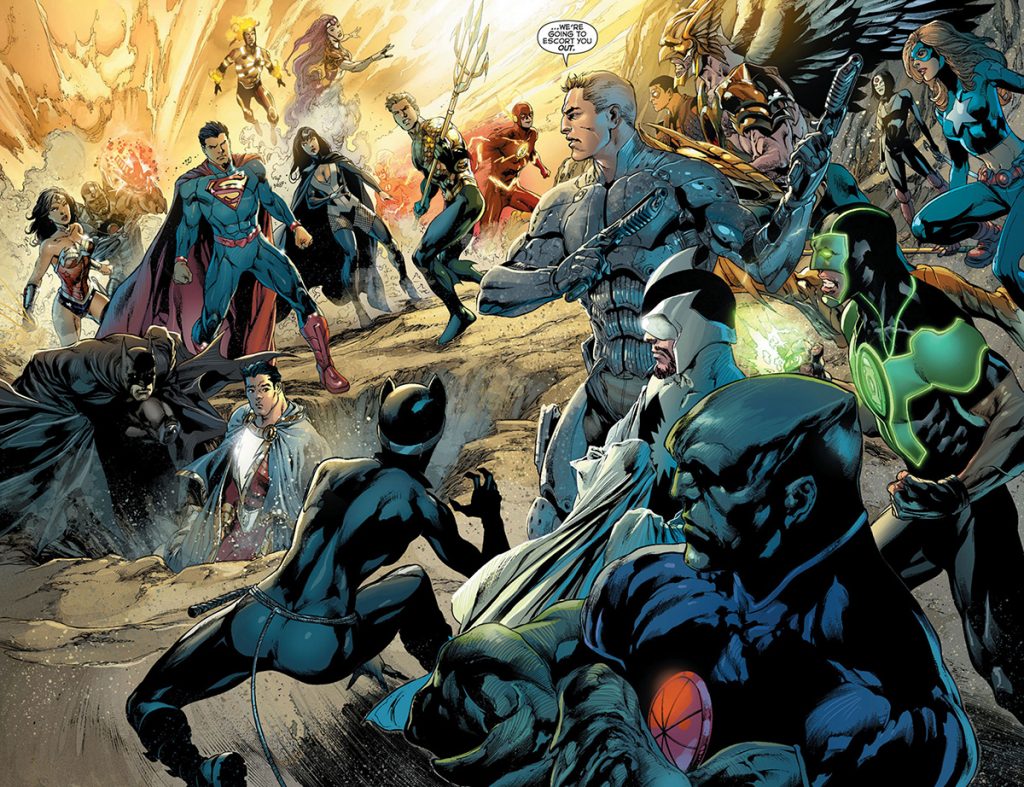 With the help of the Question, Superman escapes his confines and the group fracture as he attempts to go after answers to what caused him to kill. This disintegrates the group and puts Batman and Wonder Woman at odds. It’s like seeing your parents divorce in the messiest way possible. Diana’s relationship with Clark means that her emotions are driving her to be brash and whilst Batman is more level-headed, there’s not much he can do against an overpowered Amazonian.

It’s difficult to choose a dog in the fight because of this and I found myself constantly switching sides, keeping my interests up and making the book a really dynamic story to venture through. It will certainly keep most audiences engaged and it’s definitely worth picking up if you want a story that doesn’t really have any downtime.

After failing to open the box with the purest of us, Pandora now seeks out the Darkest. Crossing paths with Vandal Savage we get an awesome fight scene and learn more about Pandora in the process.

She seems to be really unpopular with most audiences (they did just kill her off) but I enjoyed every moment that she popped up within this book. Coming across as a complex character she seems like she is filled with regret, something I’m sure every reader can relate to. We’ve all done something stupid in our life that perhaps continues to haunt us, and whilst ours may be on a much more minor scale, it still makes us feel like we have a kinship with the character. That’s what’s great about John’s writing, he takes otherworldly concepts and makes them seem everyday. Allowing his work to connect with the audience more and this book is no exception.

A Chance At Heaven

Realising they have to get the truth from Dr. Light, Batman and Co journey into heaven. John’s puts forth the idea that as heaven is a relative concept it contains an infinite amount of universes, built on the dead that inhabit its own personal preference. Being agnostic I found this idea quite appealing. I’ve often wondered how Heaven could exist if so many people’s ideas of it contradict one another. This perfectly portrays the idea of it in a way that is indisputable and allowed me to engage with the story more. I am often put off by religious motifs in comics but this balances the concepts well and makes for an enjoyable read.

Batman overlooks a happy life, Katana is reunited with her husband and the issue has a timeless feel to it. They track down Light but are stopped by a returning character, Zauriel. It’s nice to see the angel back in the pages of DC, he was brilliant in the JLA run and it’s a welcome return that elevates the book for the older fans. 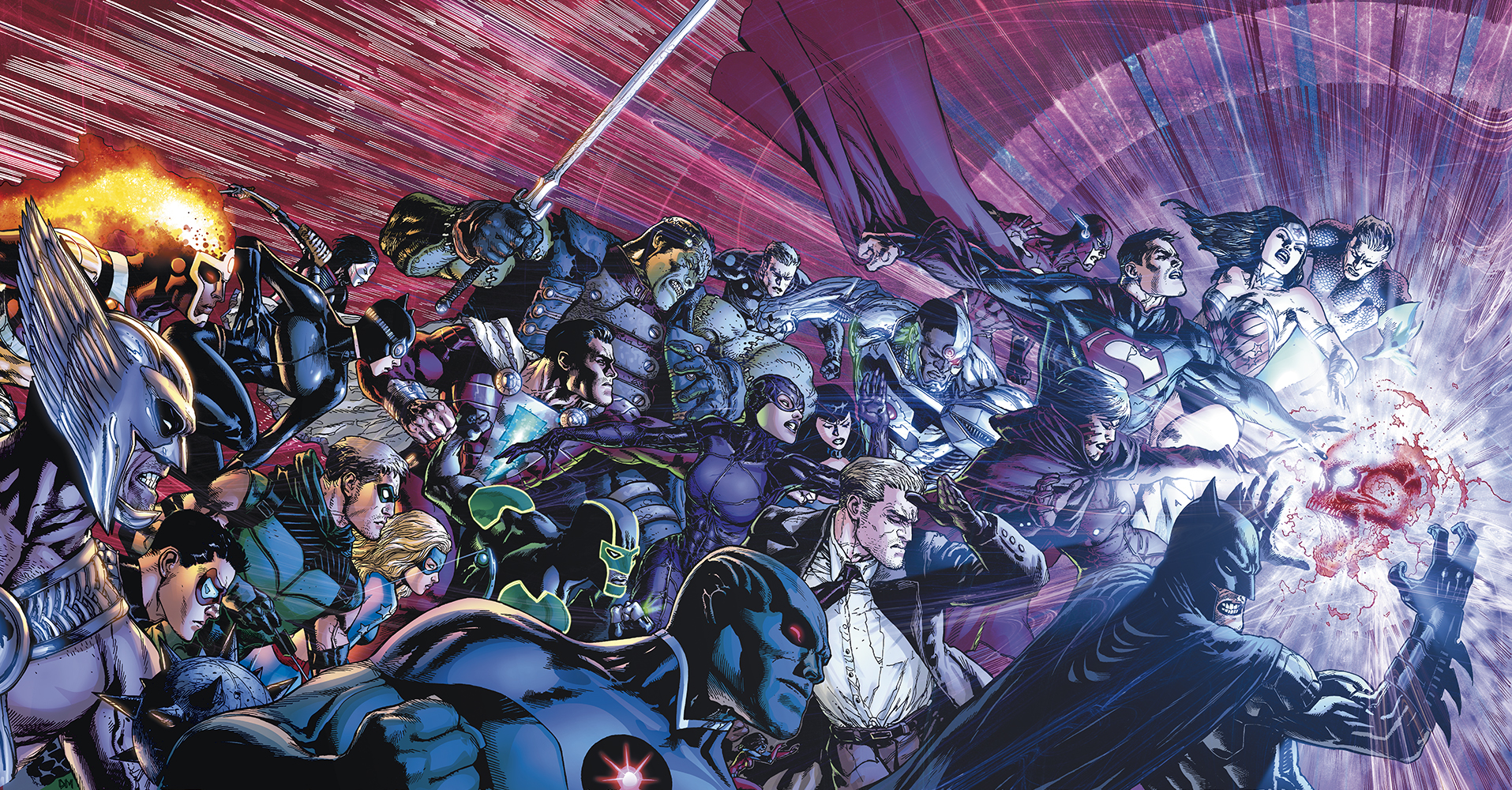 Tracking down Doctor Psycho, Superman learns that it was The Secret Society that forced his hand to kill Dr. Light (lots of doctors). It’s also in this chapter that we learn that The Atom has been in league with Amanda Waller, who set up a task force with Steve Trevor to take out the Justice League should it come to it. The twists come thick and fast and when Wonder Woman finally opens Pandora’s Box, becoming possessed in the process it seems like all hope could be lost.

Sure the book is full of people about to finally tell the team what the box ACTUALLY is before being cut off in a ‘you don’t understand…the Box…it’s really….AHHHH’ kind of way. Which is slightly drawl. But there’s enough good here to not completely derail the book and make up for the slock (that’s twice I’ve used the phrase “slock” in this review, I have no vocabulary).

The group battle it out with one another. The Box corrupting then as they touch it. It’s once again a call back to Lord Of The Rings and makes for a slightly monotonous battle until all the pieces are laid on the table. Firestorm realises that the box didn’t make Superman lose control, it was the Kryptonite that someone planted in his brain, causing him to be ill. The Atom and mysterious Outsider (who has operated in the background throughout the book) step forward. Admitting that they placed the kryptonite there, The Atom reveals that Pandora’s Box is in fact, a mother Box, one from Earth 3, the universe of evil. With the League too busy fighting each other to really do anything she informs them that they have been pawns, distracted whilst the real plan comes to fruition. Only someone from Earth 3 can open the box and now they have it in their possession.

The Outsider (revealed to be Earth-3 Alfred Pennyworth) uses it allowing the Injustice Gang to step forward from their world, to be unleashed on a now exhausted Justice League. 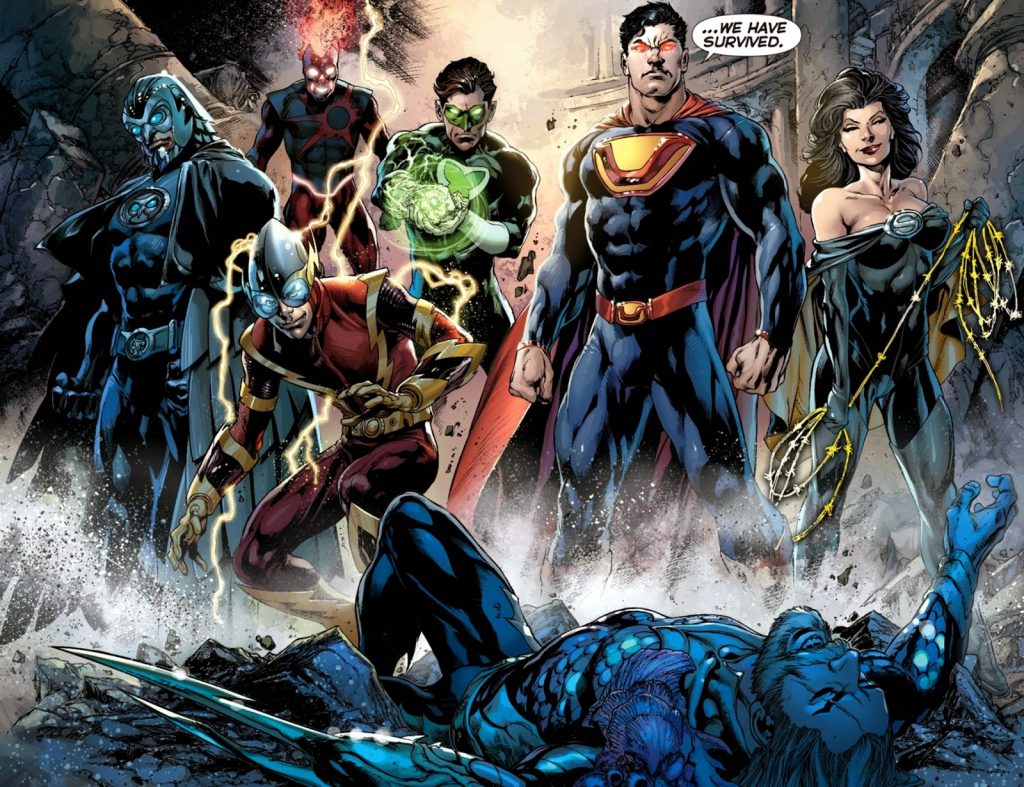 Justice League: Trinity War requires a lot of pre-knowledge before going into it. If you possess that you will find an outstanding event book that has one hell of a gut punch ending. Whilst I was unfamiliar or even downright hated some of the characters we spend time with before this, John’s has managed to create an engrossing narrative that is a breeze to read.

I was shocked that the story was 11 issues long because it flew by at a brisk pace. There’s nothing I can really criticise it for. If you love the Justice League you’ll be head over heels with this book. It leaves you wanting more which is slightly bittersweet but there’s a lot to love here.

I’m giving it a solid…