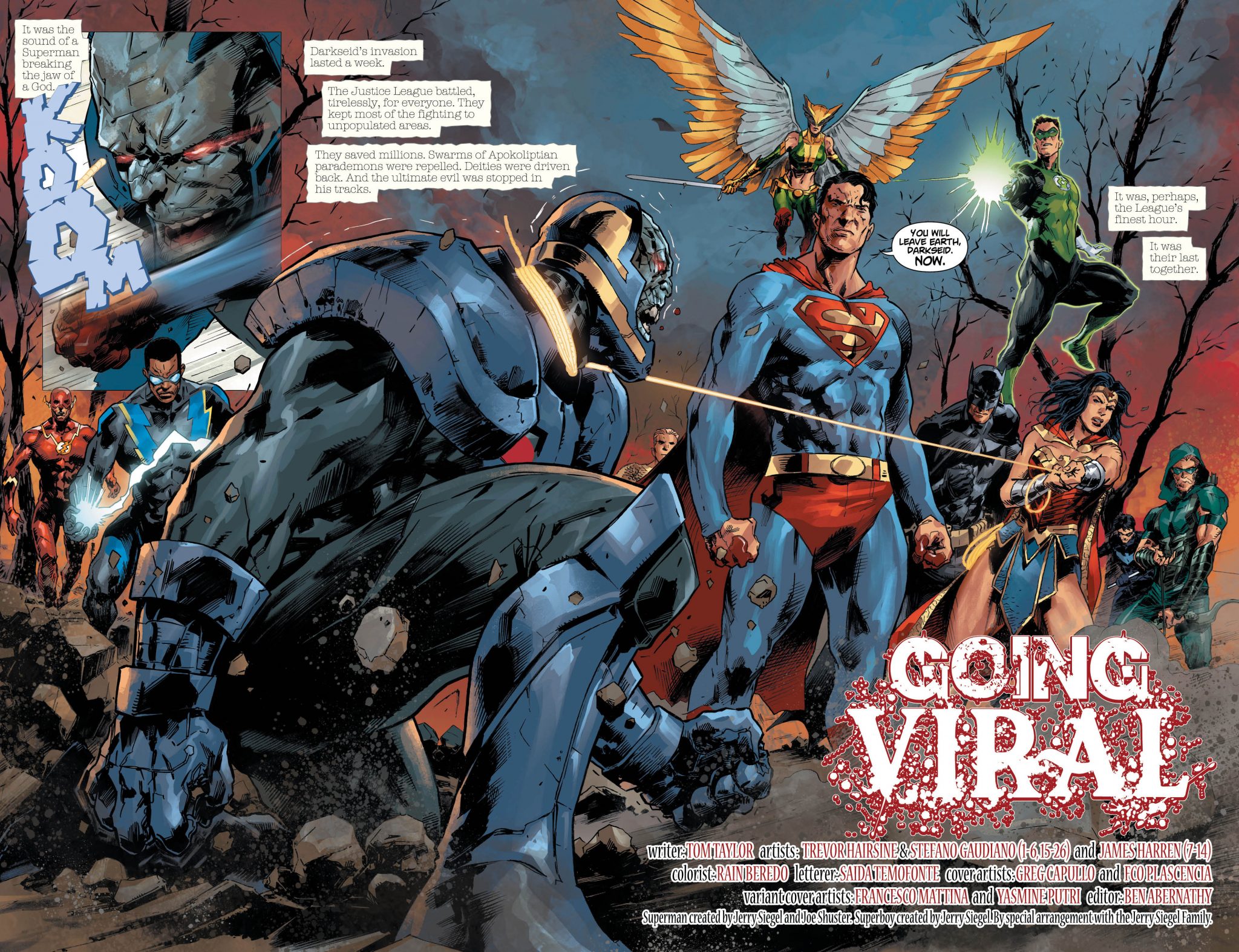 Dceased is currently getting a lot of critical acclaim in the comic book community.

The Marvel-Zombies-esque work is picking up a tonne of attention for its fresh (or rotten) take on the heroes of the DC Universe. No matter who you ask, everyone seems to enjoy the book and it has slowly became one of the best titles from the publishing giant in recent memory.

But does it LIVE up to the hype?

That’s what we’re here to find out and throughout this review, we’ll be discussing whether the book resurrects the comic book genre or if it’s dead on arrival.

There will be some spoilers here so if you don’t want to know what happens then I highly recommend that you skip to the score and come back once you’ve had a chance to read the work.

With that out the way, let’s get into DCEASED!

The End Is Here

Six hundred million people have been infected with the mysterious techno-organic virus. This has turned them into mindless, rampaging killers hell bent on death and destruction.

The disease is a new strain of the Anti-Life equation and it is even more deadly than its prior version.

After being fused with Cyborg and sent through the internet, the virus spreads like wildfire through social media and slowly the world is ravaged by its reach.

Now, all that stand between the world and annihilation are the Justice League.

It’s an excellent way to start the storyline and as someone who is currently living through lockdown whilst writing this, the supervirus aesthetic definitely struck a chord with me.

Horror is a genre that feels perfect for the DC Heroes but it’s rarely explored and I’m so glad that the creative team chose this avenue as they excel in doing so.

Reading this during a pandemic makes it feel ever more relevant and it’s actually scary how some of the scenarios that play out in the book have happened right before our very eyes in real life.

Watching the group tackle the disease head on is gripping and, as with all good zombie stories, we see over the top gore, fan favorites turn into the undead, and survivors fight tooth and nail to make it one more day.

It’s a great piece that really caught my attention early on and in my opinion, it bests Marvel’s Zombie else world story in several ways.

There’s just a lot more humanity in this work and whilst that was a dark comedy, this just feels devastating.

Watching Jonathan Kent become ravaged by the disease is heart breaking, seeing Alfred gun down Batman will have your jaw on the floor and the book is laced with massive moments that feel like complete gut punches.

However, there is still hope, and seeing just how low things can sink makes you far more invested in the struggle of the heroes.

We’ve never really seen those with superhuman abilities go up against the undead before and it provides the work with a unique side to it in a genre that is sorely oversaturated.

Grateful To Be Alive

The heroes destroy the internet and begin to build arks to flee to other planets. Unfortunately, there is a second wave of the infection and it hits The Flash who spreads it around the Earth at super-speed before Superman is able to intercept him.

He kills the character but in doing so infects himself.

He has an extremely emotional goodbye with his family and tries to flee but before he can get away the virus takes him over and he returns to Earth.

It really raises the stakes for the finale and we all know in Tom Taylor’s other work ‘Injustice’ just how dangerous the Man Of Steel can be.

Couple this with the zombie infection and you have a ticking time bomb on your hands that spells doom for the planet.

Everything goes down in the final chapter and whether it’s watching Atlantis vs Themyscera, Wonder Woman vs Superman or The Man Of Steel vs his own son Jon, it’s a marvel to behold.

What I love about the work is that, like most horrors, it ends in tragedy and it really feels like a devastating finale that I don’t want to ruin here.

Overall it’s the perfect way to close the work and you should definitely pick this up. 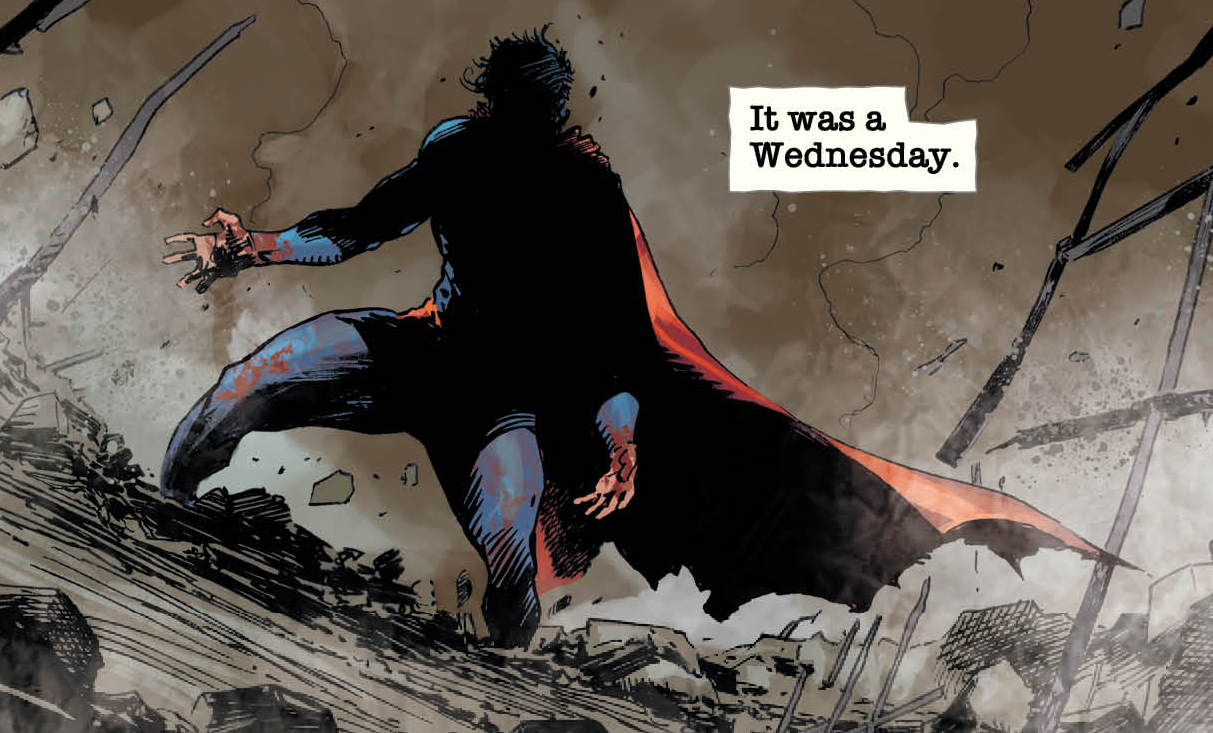 As you can probably guess, DCeased is a complete blast.

It has heart, drama, action and enough twists to make this an incredible page turner.

It perfectly encapsulates the horror genre and by far I think it bests its Marvel counterpart.

This is a fantastic book and it gets a…