Batman/The Flash: The Button Review By Deffinition
If you’ve been following the podcast that I and my friend, Tom Kwei do, ‘Watching The Watchmen.’ Then you’ll know I’m quite protective over how the property is used. After the middling film and dismal ‘Before Watchmen’ series that was released by DC during the New 52, many fans think this franchise should be left alone.

For better or worse, DC have decided to inaugurate the Watchmen series into their classic universe and pit the heroes side by side. Teased with the launch of DC: Rebirth, we began to see the two revered franchises intertwine. Many fans asking questions and giving arc theories in the process.

Is The Comedian The Joker? Will Superman fight Doctor Manhattan? Can Night Owl still get it up? There were hundreds.

One of the additional, less interesting ones was ‘what is the Comedian’s badge doing in the Batcave?’

This issue attempts to answer that.

Following The Flash and Batman we journey on the quest to solve the head scratching question.

Taking elements from Flashpoint (another book that I adore, just check out my review here) this book will join two critically praised storylines and in the process either make them every comic book fans wet dream or worst nightmare.

Which will it be? Will DC pull this off? Can this huge risk pay off? Or will they ruin two of their best books in the process?

Let’s jump In to find out! 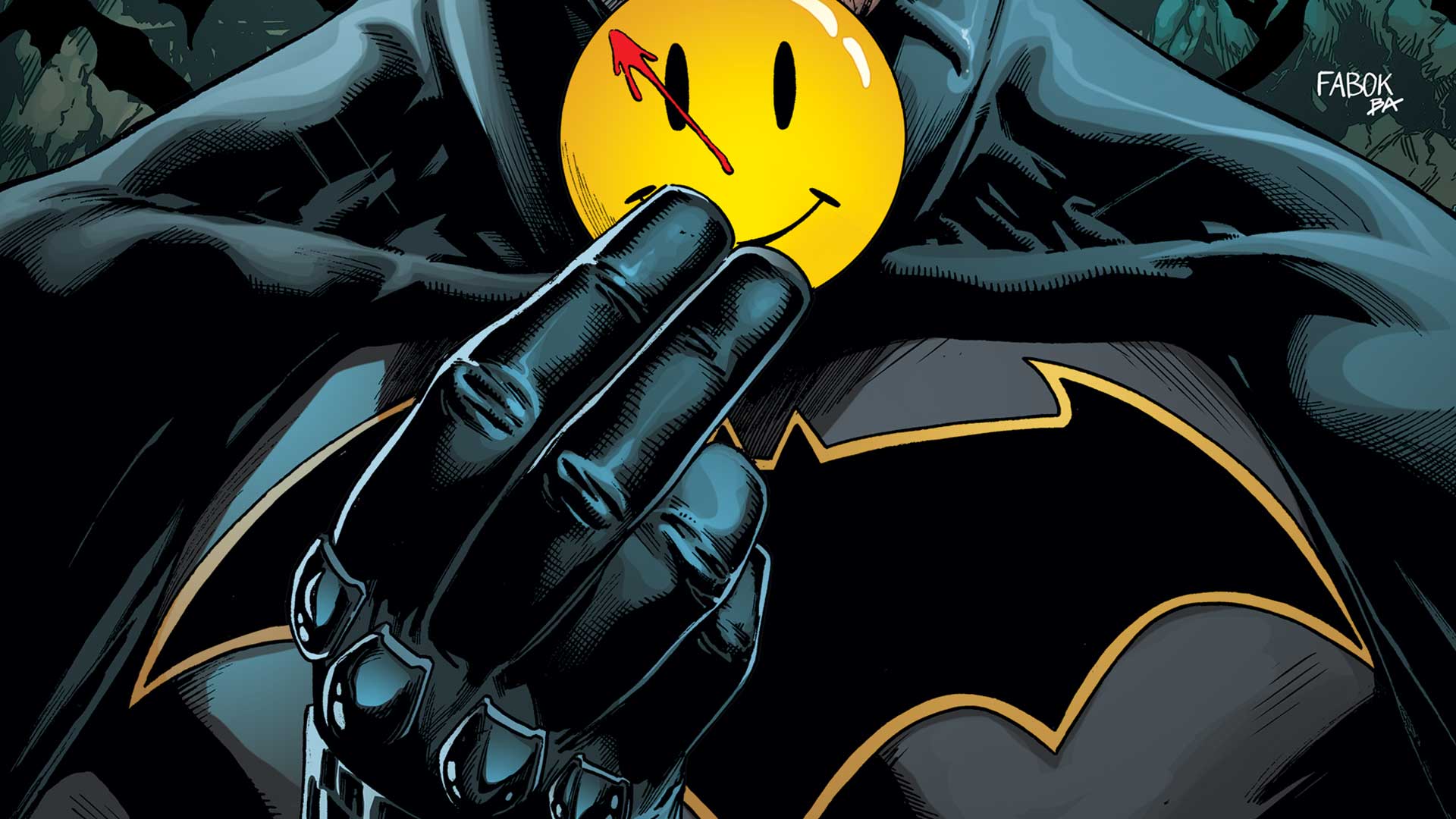 Batman Vs The Reverse Flash

Getting off to a phenomenal start we join Batman in the Batcave as he ponders over the mystery of the button (it’s not a button…it’s a badge). In the background he has GSPN on. I have no idea why the Caped Crusader is watching a hockey game whilst doing his crime fighting but I suppose all of us have our sad little hobbies. At least he doesn’t write reviews for comics that nobody reads. Anyway It’s at this moment that the Reverse Flash shows up.

Firmly footed as my second favourite villain in the DC universe, it’s great to see the return of the maniacal speedster. After dying in Flashpoint I have been desperate for the Flash’s favourite foe to return and the ensuing battle that he has with The Dark Knight is a thrilling one.

Taking up the entire first issue we see how the two would deal with one another in combat and basically, Batman gets the crap kicked out of him. Knowing that The Flash will arrive soon, The Dark Knight merely has to delay the Reverse Flash until backup arrives. However, after noticing the button (it’s not a button, it’s a badge), the Reverse Flash picks it up, disappears for a second and returns screaming that he has witnessed God.

He drops down dead and It’s from here that our true mystery begins.

Opening the book in outstanding fashion, This first chapter really grabs your attention. Reminding me of the Ozymandius vs Comedian fight from the original Watchmen story, it too sets up a mystery that makes you want to delve deeper into the rabbit hole.

Flash From The Past

After Batman recovers, he and Flash travel through the multiverse to uncover as many clues as they can. We get a beautiful trip through the JLA Watchtower, viewing many of the trophies they’ve collected through the years. It sort of signifies that the duo have a rich history together and in the same way DC are now harkening back to Watchmen, nostalgia is used to make fan boys go crazy. It was a nice touch if not a little ham fisted in a ‘Hey hey…member starro the conqueror…HEY member Watchmen’ sort of way. 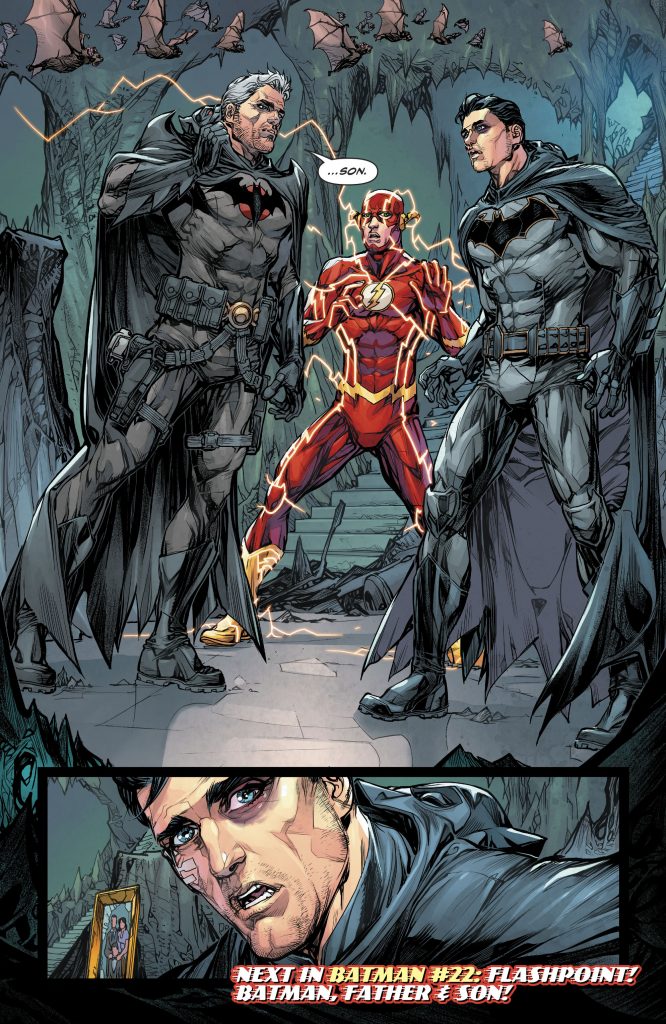 One of the most memorable and poignant moments from Flashpoint was when Thomas Wayne, Bruce’s father, gave the Flash a letter to deliver to his son in an alternate reality. It was a touching plot point that didn’t need the characters to meet in order to have a connection and understanding of one another. DC against my judgement finally have the two meet in this issue.

I’m happy to say that I was wrong. When the two meet it’s a touching segment that almost brought a tear to my eye. As a reader, I have lots of things that I’d like to say to my father but probably never will. It’s the paradox of being a human, wanting to show our emotions but also spend most of our life safe guarding them. So it’s gripping to see Bruce finally get to tell his father all the things that he never had the chance to till now.

Though short lived, it’s definitely the book’s highlight and an emotional point that elevates This above most comic book stories.

When the Flashpoint world gets destroyed, Bruce and The Flash travel back into the timestream, bumping into Reverse Flash moments before he was murdered.

As with most time travel centric stories, the protagonists inadvertently cause the element that drove them to time travel in the first place. This is no different. They force Reverse Flash to meet with the mysterious ‘God’ character which is where he inevitably meets his death. We never really get a solid answer on exactly what happens and honestly the book leaves you asking more questions By it’s end than you were at the beginning.

We fade out to Doctor Manhattan picking up the button (it’s not a button, it’s a badge), orating a quote from Watchmen and the yellow and red of it transforming into the Superman logo. Teasing the next story in the saga: The Doomsday Clock.

Batman/The Flash The Button doesn’t ruin Watchmen or Flashpoint. However, it also adds very little to either of the mythos. Acting more as fan fiction, it slightly misses the mark on some elements but overall does a lot more good than it does bad. It still leaves me wanting to know the answers, even though they could disappoint. So I suppose for now that that is a positive.

Featuring stellar art, there’s very little to fault this book for and the meeting between Bruce and his father is worth the price of admission alone.

That’s why I’m giving it a…