Skip to content
The Flash: Flashpoint Review By Deffinition 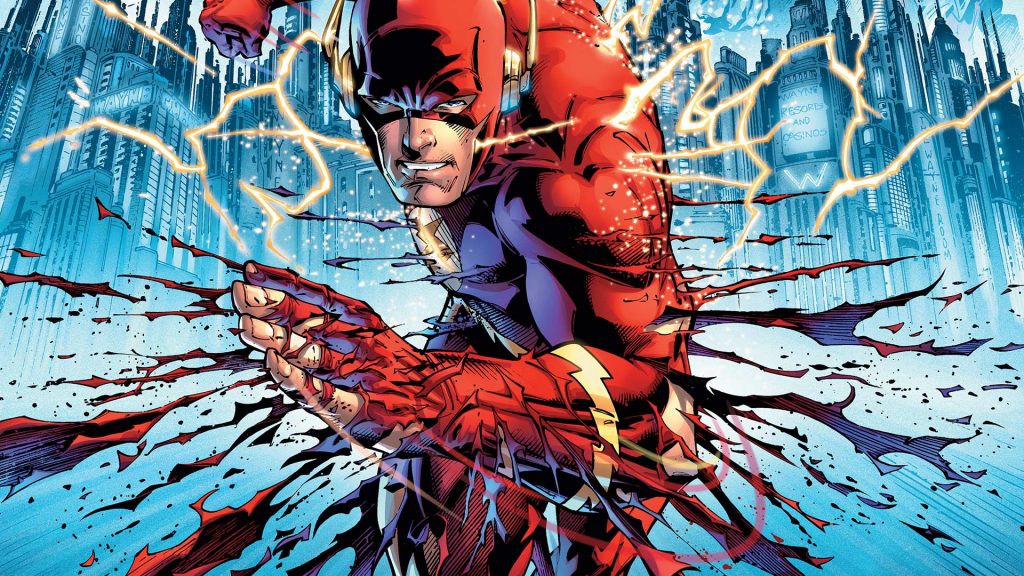 Flash In The Pan?

My first encounter with Flashpoint was through the DC animated movie. Like most comic book fans out there I absolutely loved it. It had it all! Johns and the team did a brilliant job of crafting an interesting world and really getting the audience invested in The Flash. I’ve read Flashpoint several times in the past and found it to be an enjoyable run through what I would call the speedster’s ‘Bizarro World.’

Now viewing it with a critical eye does it hold up under scrutiny? Read my review to find out!

Flash from the past

I adore the way the book opens, Barry has no real idea what’s going on and neither does the reader, this instantly makes you relate to the character and feel the wonder and fear that he is experiencing. Johns expertly gets us up to speed with the world in what is an exposition heavy first chapter that introduces villains turned heroes as well as a new Batman.

Unexplained we jump from panel to panel as Barry explores the world around him, ending up at the feet of his now alive mother. It’s a great way of tricking us into thinking somehow, someway, the good guys have won and everything is alright.

As mentioned earlier the new Batman, as with all versions of the character, is where we see the dark side of the world come out. There is a war between Aquaman and Wonder Woman and due to this the world as they know it, is close to destruction. The new Batman is a brilliant embodiment of what the world has become. He is brutal, violent and a killer.

Ofcourse you probably know the twist, but here’s a warning if you don’t.


Thomas Wayne is Batman! Shockingly Bruce died in the alley and this drove his father to don the cape and cowl. There are some other aspects of the canon that are amiss in this reality that end up being cool little nods to the character’s rogues gallery. This really speaks volumes to John’s imagination. He is able to envision alternative scenarios, expand on them and bring them to life in an interesting and unique way. The premise might not have been as well handled with another writer but the pre-existing knowledge of the DC universe allows John’s to put exciting twists on the lowly mundane characters all the way up to A listers.

Subjugating from the alternate Batman, Barry’s mother is alive and thus he never became the Flash. This causes the books first real conflict. Barry is at heart a hero and even though he now has his mother back, something is not right and he must assume the mantle of a hero once more. This shows just how special the character is and how no matter what, Barry will always try and be a hero.

His teamup with Batman was one that I never really considered prior but it makes perfect sense. Both have lost someone they care about which spurred on their scientific mind to fight crime and make sure that no one elsehas to go through their pain. It’s heartbreaking when Barry explains his world to Thomas Wayne. This is a real clincher as it causes Thomas to join his quest, who realises that he could save Bruce and change time back to the way it was if he were to sacrifice himself. As Barry begins to lose the memories of his past life Thomas is unshaking in his goals. ‘Don’t forget my son, don’t forget Bruce’ he utters. The ideology that Thomas Wayne is determined to make Bruce live, even if it results in his own death, is a brilliant way to truly show an in depth look at Bruce’s father beyond his end in the alley. He really is one of the best versions of The Dark Knight ever.

A brilliant move to keep tension rife throughout the story is when Allen tries to recreate the excitement that made him become The Flash…and it fails. The fact he retires it after being majorly burnt speaks volumes to the depth of Barry’s need to be a hero. He is truly dedicated to being the flash and will try and try and try again to resume the role, even if it kills him. Ofcourse he regains his power and it’s a triumphant moment when he saves Batman at super speed and mutters ‘told you.’ It’s not all perfect though.

One of the disappointing aspects of the book is the side characters. We are shown glimpses of Deathstroke, Steve Trevor and several other big names freon the DC universe. However, they are cast aside quickly and used mainly as exposition, it doesn’t do them justice. I would rather they were left out of the plot instead of slowing it down and cluttering it with their death.

In addition to this, whilst the rescue on superman is an exciting crusade with a devastating reveal, it almost amounts to nothing other than the cool showing of the blue boyscout looking rather, stickly. It was ground that needed to be covered but I would have preferred if he had’ve joined them for the rest of the run instead of making a cameo towards the end.

The plot goes through the cliches of having everyone team up and go on their quest to save the world. What diverts the story from the norm is the twists on the character, whilst a predecessor, the flashes of injustice really help to get you wrapped up in the book. The reveal of Thawne, Barry’s worst nemesis and the suspected cause of Flashpoint, exclaiming ‘look what you did’ is a brilliant twist for the reader.

Ofcourse if you don’t already know, it wasn’t Thawne who went back in time and saved Barry’s mother, causing flashpoint, it was the Flash. His selfish act has lead the world to destruction and it’s a heavy weight to bear.

I absolutely adore Thawne, his reverse flash is an excellent antagonist, constantly taunting Barry over his actions in the final act makes for a breathtaking climax and it is one of the chapters that truly elevates the book to its legendary status. The Reverse Flash highlights that he’s never killed our hero because he needs Barry in order to become the Reverse Flash. However, with time changed he no longer is reliant upon him and is able to take out all of his frustration and finally end his life. It really ramps up the tension and the final save by Batman is a huge relief to an almost crushing finale.

Ofcourse the flash wins but it is very bittersweet, in the final moments before correcting the timeline he travels to his mother, knowing he will kill her and they say their goodbyes. It’s a beautiful moment that’s rarely is reached in comic books and it shows that this book truly transcends the genre.

The New 52 is created and it was interesting to see that The Watchmen were already being hinted at, as well as there being three timelines which could ofcourse explain the three jokers. Whether this is intentional or not it was still a stroke of genius upon John’s side and shows the depth of his creativity.

The book ends triumphantly with Barry correcting the time stream and visiting Bruce with a letter from Thomas Wayne. It’s a touching way to end an amazing plot and you could be excused for shedding a few tears. 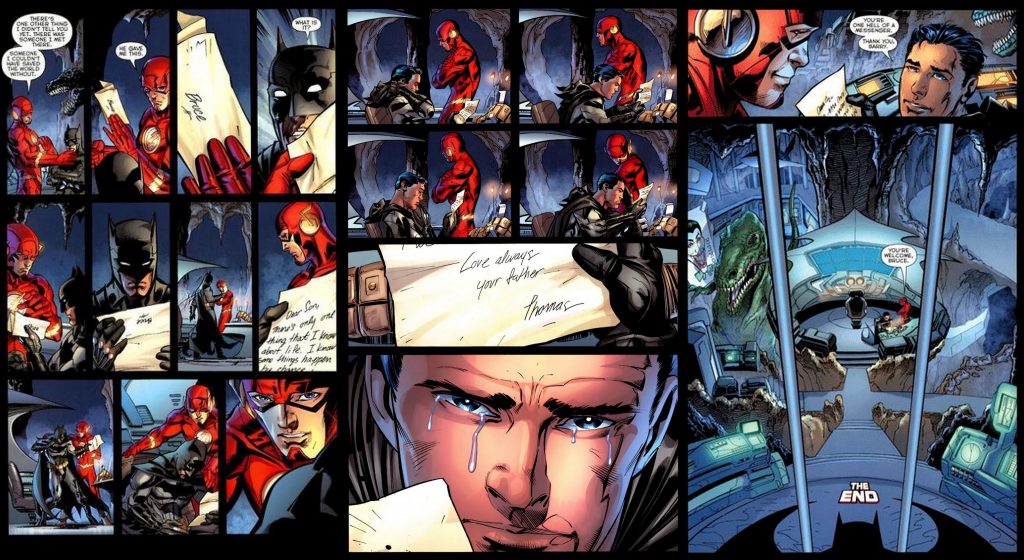 Overall flashpoint is the perfect book that represents just how good a graphic novel can be. This brilliant chapter in the flashes history serves as one of the greatest comic book stories of all time and it’s difficult to see how it could be improved. I don’t want to go too much on the old cliche of ‘the book was better’ but if you’ve only seen the animated movie then you owe it to yourself to pick this up. It is one of the best!

That’s why I’m giving Flashpoint a…..