Avengers Vs Thanos Review By Deffinition

Avengers: Infinity War is everywhere you look at the moment. The film capitalises on a ten-year setup in the MCU and showcases the arrival of Thanos and The Infinity Stones.

The hype has never been realer!

Whilst this plot is revolutionary on the silver screen it has actually been a staple in Marvel Comics for decades and there have been several storylines over the years which have inspired the latest big screen blockbuster.

One of those is Avengers Vs Thanos.

Penned by Jim Starlin, the book sees a landmark storyline for Marvel that many cite as one of the companies best. But does it still hold up? It’s no secret that comic book storylines age quite badly and time may be a force that even this legendary story can’t stand up to.

Throughout this review, I will be discussing the graphic novels storyline and letting fans of the films know whether they should pick it up. So sit back, buckle up and let’s dive into Avengers Vs Thanos!

The book instantly shows its age due to its dated dialogue and colourful art. Whilst some may wince at cringe at the elderly aesthetic, I had a lot of fun with these early chapters. There is a certain charm to the work and Starlin’s images leap off the page due to the bombastic action and bright costumes.

Predominantly a compilation of Thanos’ many appearances throughout the years, this certainly isn’t for everyone. However, those that fell in love with comic books during the 70s and 80s will adore this nostalgic walk down memory lane and I loved following the footsteps of heroes like Captain Marvel and Daredevil. 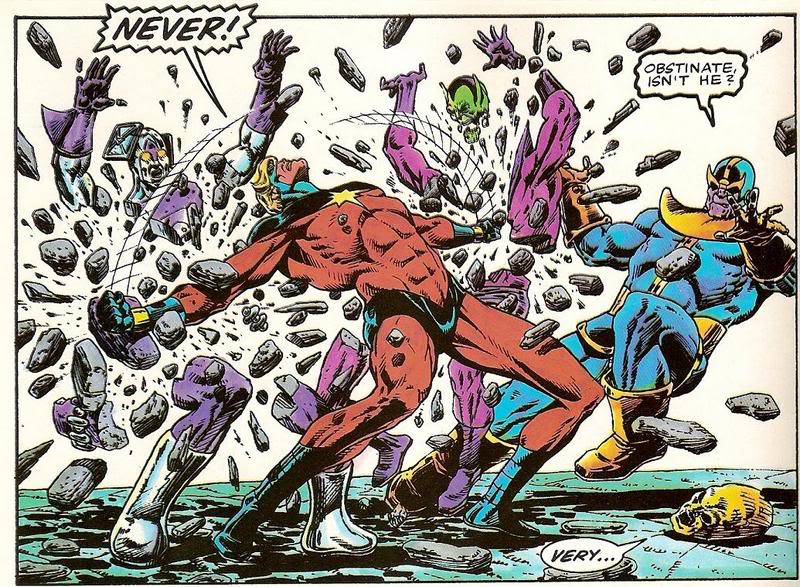 We open on the first meeting of Thanos and Iron Man. It’s cliched, simplistic but completely adorable. There is a certain innocence to the work and watching the archetypical hero vs villain story play out has a purity to it that made me turn page after page.

There isn’t the need for heightened drama or political parodies, this is Man vs Monster and pure escapism for those looking for a break from the overly convoluted comics of modern times.

However, not every story is impactful and there are several that can be skipped in order to get to the main meat of the story. Featuring several retired and now retconned characters ensure some of the work is now slightly taxing. I struggled to become as fully engrossed in the book as id like to by having prior knowledge of what plot points had stuck over the years and what ones had been wiped from canon and this made the book an….

There seems to be little progression in the storyline the longer it wanes on. Thanos is always on a quest to obtain a universe ending device and even when he obtains it, he is thwarted rather easily.

When this plot device happens regularly throughout the graphic novel, it loses its impact.

There are no real everlasting effects and the characters become stuck in a loop that neither develops them or provides any intrigue beyond a change of costume and hair colour.

Thanos is the archetypical comic book villain and whilst he has charisma, he loses all threat and prowess due to his defeat in every instance. Often his lackeys provide the biggest confrontations and because of this, the book seems misguided.

Upon becoming a God, The Titan becomes bafflingly easy to trick and I winced at some of the ways he was tricked into losing his power. He may be the most powerful being in the universe but he isn’t exactly the smartest. 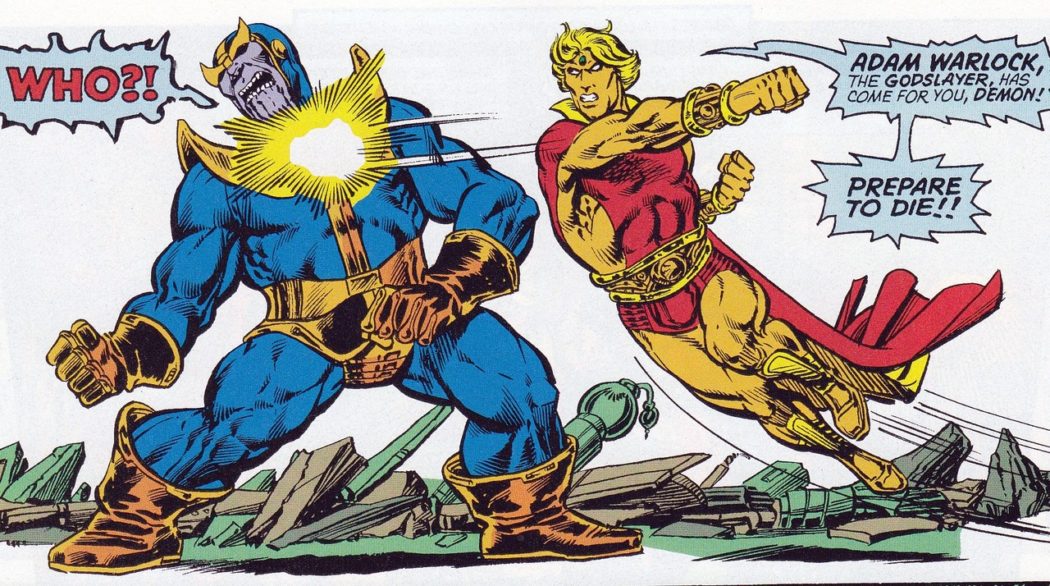 There are glimmers of hope in the backstory that explains Thanos’ motives and objectives. However, the book becomes bogged down in its own mythology and is too derivative of Jack Kirby’s New Gods to be credited as anything more than a rip off.

The presentation becomes banal and when the characters stop mid story to talk to the reader directly and inform them of the villain’s history the work becomes completely world breaking. This choice to smash the fourth wall is so jarring that it disengaged me from the run entirely. My mind wandered and I was unable to enjoy most of the book, even if the characters told me directly that I should.

It’s a shame because what Starlin does with the backstories are interesting but there was always a niggling feeling in the back of my mind that I had seen it all before in bigger and better books.

His attraction to death is probably his most notable characteristic but we never really get an explanation to why he is so obsessed with the character and her inclusion is minimal and for the most part unnecessary. 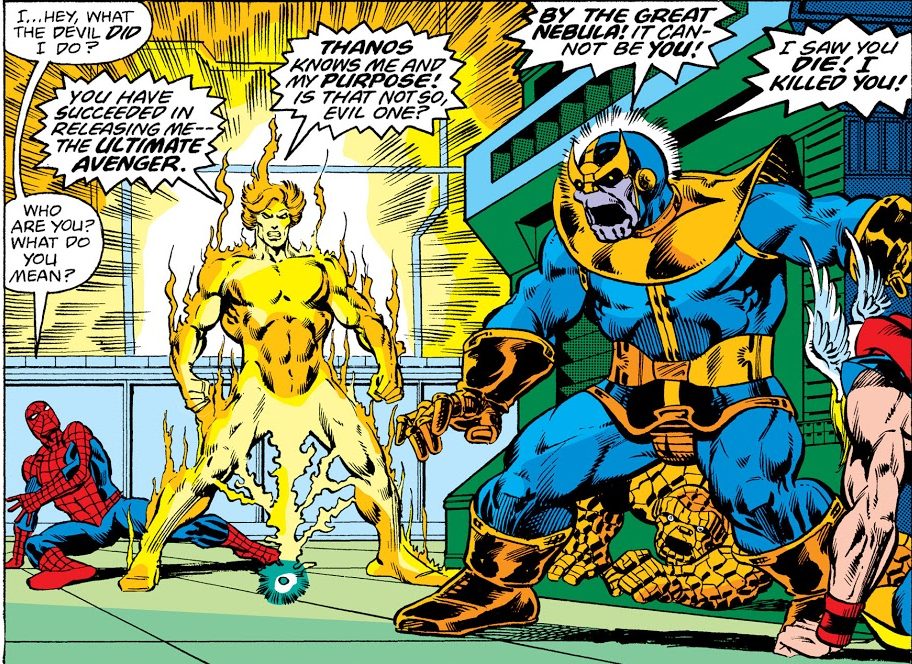 The Man Without Fear

In the graphic novels midsection we get a Daredevil centric storyline. During which, the vigilante is gifted with the ability to see once more, however rather than tackle the reprocussions that this has on his psyche and ability to lead a normal life, the creative team instead focus on him fighting villains.

It’s a massively missed opportunity and highlights one of the book’s biggest flaws. It fails to really deliver on many of its premises and none are developed past the point of cosmetic changes.

Captain Marvel becomes cosmically aware, Thanos becomes a God but it doesn’t mean anything overall and when the battles are so humdrum, the book becomes hard to recommend.

However, that doesn’t mean it’s all bad. There is a brilliant storyline in which Adam Warlock must Battle a tyrannical version of himself from the future. Fearing everything that he may become, it’s effortless in its story telling and provides a lot of insight into how absolute power can corrupt absolutely.

Far more interesting than any Thanos storyline it highlights just how one dimensional the book’s main villain is and I was desperate for more self contained arcs like this. They are just too few and far between, which is a real shame as when our focus lies away from the main storyline the graphic novel becomes a much better read.

‘A Generally Useless Troll’ is uttered throughout the book and whilst It is isn’t meant to apply to Thanos, it perfectly encapsulates my thoughts on him. He is easily defeatable and completely impotent in Battle. Making him a terrible villain.

Obviously, I know the character has been portrayed better in other books but this is not a good starting point for those who and dipping their toe into the villains mythos. 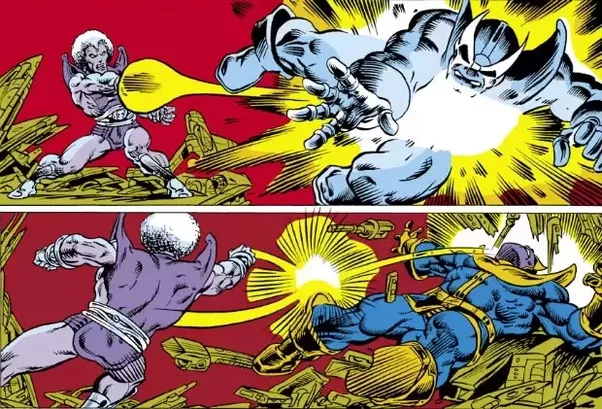 The book definitely saves its best till last but it’s too little too late. Facing off against the entire Avengers team the finale is a big send off that would have been better just printed on its own. The book felt like it had consequences but it was nowhere near sweet enough to wash the bitter taste out of my mouth and failed to redeem the graphic novel in my eyes.

Avengers Vs Thanos is a bad book. Whilst it was probably good for the time, age hasn’t been kind to it. Its dialogue is written like a Shakespearean play, yet the action and storyline are so simplistic that it feels like a primary school theatre production. There is very little to like here and I can imagine even people who read it at the time of its original printing will roll their eyes at several sections.

It does set up a lot of the War to come but you might as well just skip this tiresome prologue and go straight to the main war.