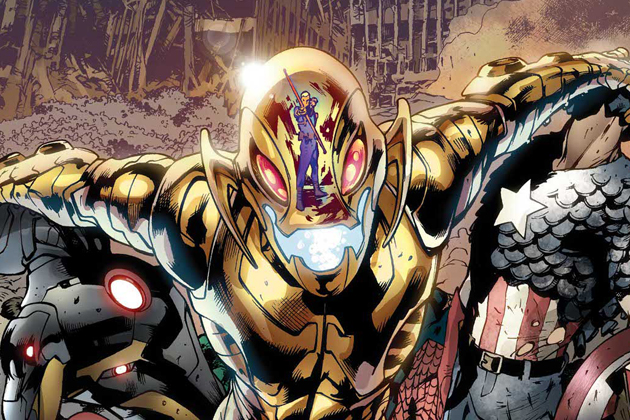 The Age Of Ultron is upon us! If you’re like me then the title ‘Age Of Ultron’ is synonymous with the MCU film of the same name. Whilst I absolutely love that adaptation, I’ve never read the source material, till now.

I’d heard mixed things about this ‘What If’ Story but going off past experiences, if something is adapted into a film then it tends to have a lot of clout behind it.

Throughout this review, I will be discussing the piece that is Age Of Ultron to let you know if it’s worth picking up.

There will be heavy spoilers and it may be worth skipping this for now if you want to go into the graphic novel with fresh eyes. With that out the way, let’s dive into Age Of Ultron!

The Rage Of Ultron

By the book’s opening, Ultron has already won. The small rebels that remain seem like they’re fighting a lost cause and everything looks bleak for the Marvel Universe.

Starting an uprising are the few heroes that remain which are made up of the likes of Captain America, Iron-Man, Spider-Man, She-Hulk and Luke Cage.

We learn that a version of Ultron from the future is using time travel to punish those in the present and the survivors must locate him before he becomes fully powered in order to stop him once and for all.

It’s a brilliant aesthetic that whilst, not completely original, feels invigorating in The Marvel Universe. There really are a lot of stakes here and watching classic characters get killed off left, right and centre will really capture your imagination. I was instantly hooked from the introduction and this instantly stands strong as the perfect way to do an Elseworlds story.

A Vision Of The Future

Ultron has hijacked Vision and this forces the heroes to really up the ante. Formulating two plans they strike in an attempt to save the world once and for all. The Avengers attack the main hub in New York, whilst Wolverine travels back in time to murder Hank Pym.

The man formerly known as Weapon X is successful but in doing so, he drastically alters the present.

With no Ultron there was no vision and without Vision, many of the battles the Avengers fought went a different way.

Now stranded in a present that looks completely different to the Marvel Universe we know, Wolverine and Sue Storm must find a way to change things back to normal.

It’s a real spanner in the works scenario that allowed the story to evolve past the slightly mundane time travel arc it seemed to be going on and I massively appreciated the creativity that was on display here. It’s a ‘be careful what you wish for’ situation that works on a lot of levels and had me engaged throughout, which is a credit to the storytelling on display here.

The War To End All Wars

With the new Avengers distrusting the time travelling two, they lower their guard to other dangersimmensely. This allows Morgana Le Fey to attack and set off a nuclear bomb that rivals the destruction that Ultron set off in the original timeline.

This forces Wolverine to travel back in time and stop himself from ever going full terminator. It’s a smart decision that really elevates that work and keeps it fresh. It ticks all of the boxes as far as time travel tales go and those in love with the aesthetic will lap it up.

The finale is outstanding and sees The Avengers facing off against Ultron on the day he destroyed them. This time they have the gift of foresight though and manage to take him out in spectacular fashion.

The book becomes a little convoluted in its climax and draws away from the main thrust of the plot but this epilogue is enjoyable and therefore I can’t ding the book too hard because of it.

Age Of Ultron is a joy to read from start to finish. It’s easy to see why this received a Hollywood Adaptation and whilst that movie may depart massively from the source material, that still doesn’t mean that there isn’t a lot to enjoy here.

I absolutely adore time travel and this storyline ticks all of the boxes in an engaging way.