Ok so at this point, The Batmobile is one of the most famous and iconic cars in Hollywood History. First debuting in detective comics as a red roadster, the car has transformed over the decades to become as stylised as the Batman behind the wheel driving it. For every new iteration of the Dark Knight that we get we also get a new car to fit and these machines very much echo the personality and attributes of whoever is in the cowl.

Just in the same way that James Bond will forever be tied to his range of Aston Martins, Batman is very much tied to the car and each one of them is symbolic on a number of levels.

Anton Furst’s Batmobile perfectly fit Michael Keaton’s stylised gothic take, Nolan’s Tumbler echoed the groundedness and practicality of Bales Batman and Robert Pattinson’s is also a machine that mirrors the way that he is.

Getting the tone of a movie right very much depends on the choices that are applied to the machine and it can very much make or break every incarnation of the caped crusader.

The Batman brilliantly brings his ride to life and throughout this video, we’re gonna be discussing why we think it’s one of the best car chase scenes ever put to film.

If you enjoy the video then we’d massively appreciate the thumbs up and also don’t forget to subscribe for breakdowns like this every day.

With that out the way, welcome to the Heavy Spoilers show I’m your host Paul, now let’s get into why we think, chicks dig the car.

Ok so if you followed us during the run-up to the release of The Batman then you’ll know that we made several videos on the new Batmobile. In 2020 it was stated that the new ride would be somewhat of a muscle car that Bruce had built up in the same DIY manner that he crafted his armour.

Throughout the film we even get several hints towards this and when he enters the batmobile you can catch it under a tarp. There are then shots of chains, the engine and throughout the film, Reeves slowly plants it in our minds that it’s coming.

However, what we didn’t expect to see was just how terrifying it was and in many ways it perfectly mirrors Batman.

At the beginning of the movie when we’re introduced to the dark knight we hear a monologue in which he talks about how he waits in the shadows for his prey. Upon emerging at the train station he strikes a terrifying figure and the idea of Batman coming out of this darkness is too echoed in the introduction of the car.

After a shootout with the Penguin we watch as Cobblepot he’s the menacing scream of the car’s engine from down a dark alleyway.

Similar to how Batman appeared at the train station, this menacing silhouette emerges from the darkness growling like a monster taking on a life of its own.

Now if you’ve seen our breakdown of the opening scene then you’ll know we very much discussed how Reeves took a lot of inspiration from Horror movies. Just in the same way that killers like Michael Myers and Jason slowly walked towards their prey, The Batman did too.

It really laces the scenes with fear and the slow lumbering footsteps from the darkness are put in place to fill Batman’s prey with dread. 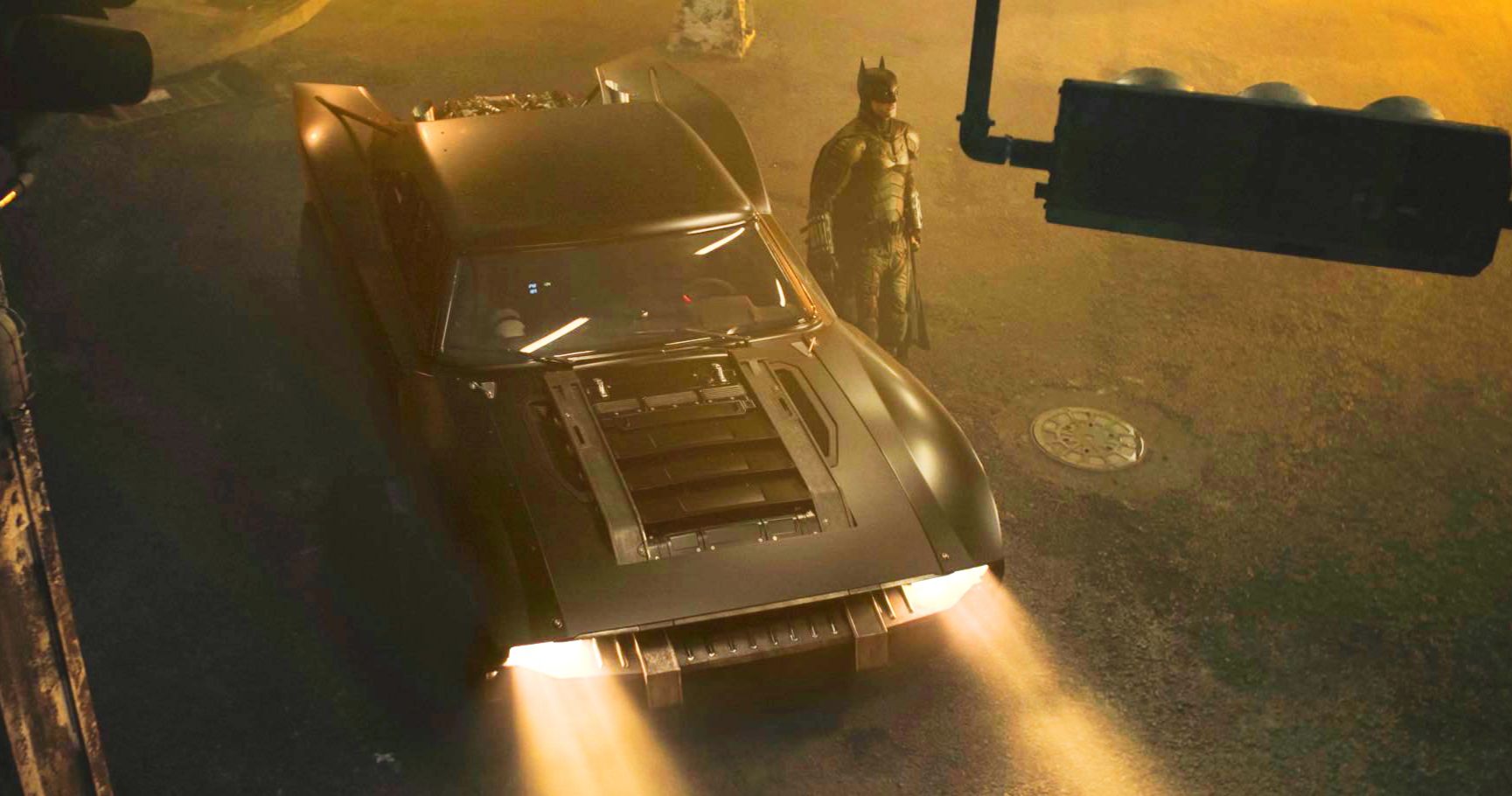 This horror inspiration extends to the car as well and Reeves has stated in interviews that he very much took inspiration from the John Carpenter classic Christine. Growing up this was one of my favourite films ever because there’s just something so mysterious about the killer car.

In case you haven’t seen it, it’s based on the book of the same name by Stephen King in which we watch a dark and demonic car that has an evil presence inside of it.

Over time it twists its timid owner Arnie into a complete psychopath and we watch as his best friend attempts to stop both him and the car.

Now what makes the movie so memorable is that the ride is indestructible and no matter what happens to it, it fixes itself. It mercilessly stalks its prey and there are several scenes such as it driving down the road on fire that Reeves clearly cribbed from in order to make his movie.

Now after scaring the crap out of Penguin, Batman gives him a second to escape which is something that Christine also did to its prey.

This kickstarts a chase scene that spans the highways of Gotham and on a technical level, Reeves achieves the impossible.

Whenever you watch car chases in movies you might notice that most of them are filmed in daylight with pretty clear weather conditions.

This extends to things like Bullet, The Matrix Reloaded, The Bourne Supremacy and a lot more.

Those done at night tend to have either overpasses or cover as the elements can cause a lot of issues.

Driving in the rain is tough enough as it is but Reeves actually ignored the typical way of doing things and he decided to do it in these conditions to add to the frantic feeling of the film.

This definitely comes across in the movie and you very much feel like you’re in there with Batman as he chases down the Penguin. Cars smash around them, there are several close calls, and other vehicles whizz past your head as you follow the face-off.

Sound design often adds to movies and anyone who’s seen this in Imax knows how heart-pounding it is as you hear the noises of the freeway flying around you.

It not only adds to how intimidating Batman is but it also plants the idea in Oswald’s head that he’s completely unstoppable. He unloads Uzi’s on him, steers cars into his path and generally just throws everything at him but it just isn’t enough.

In our last video, we discussed how he was very much like the Terminator and that Batman would stop at nothing to close in on his target. This is important to bear in my for how the chase ends but we’ll talk about this more in just a bit. Reeves actually takes lots of similar iconography to what appeared in Terminator 1 and 2 and the unstoppable machine does share some similarities with The Batman.

No matter what Oswald throws at him he keeps going, constantly in his rearview mirror, right behind him.

Everything culminates with Oswald causing a crash that sends several trucks crashing and these explode, destroying most of the highway.

As The Penguin celebrates we see that shot that calls back to Christine and the Batmobile rises through the fire, almost like a demon from the flames.

He hits the back of Penguin’s car and sends him flying through the air which we watch play out from the backseat.

As the fire burns the night sky Batman steps out and the black figure stands strong against the orange background. This is upside down like a bat and the contrast between the dark shadow and the orange makes everything pop.

Very much bringing up the imagery of a demon he slowly walks towards the crashed car and this of course echoes how he paced towards his victims earlier in the movie. Batman seems unstoppable because of this and it very much shows how he’s elevating the idea of fear in the criminals of Gotham. 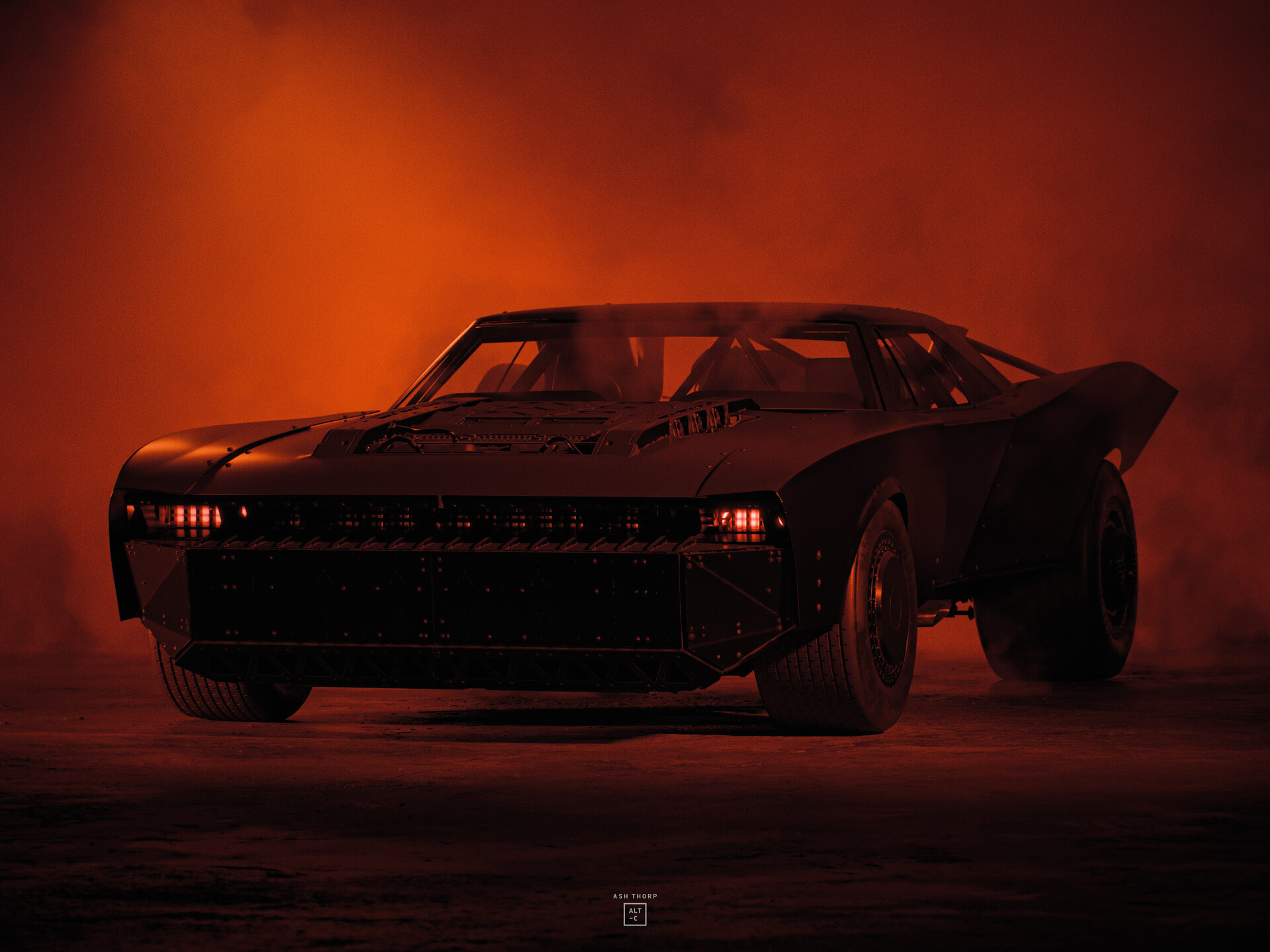 The Growing Fear of The Batman

At the start of the movie he was fighting low-level thugs and when this moved up to the Iceberg lounge, nobody there was intimidated.

Oswald even called him sweetheart and this very much extended to his bouncers and it showed Batman’s effect was very much low level.

However, this chase has risen his intimidation and it’s shown that he’s now going after those higher up the chain.

This of course extends to the movie in which he ends up taking down Falcone before moving on to the Joker.

The car chase very much sits at the midpoint of the film and it shows this progression through the ranks. Just in the same way that The Batman is a tool of fear the car is too and it elevates the persona and legend that he’s crafting in Gotham.

No matter what, if he has you in your sights, the Batman will come for you and there’s absolutely no escape.

It’s an incredible piece of filmmaking that supplants the new batmobile as one of the best ever and it’s the perfect way to introduce the car. Not only does it strike fear into its foes it also dominates the road, provides a relentless chase and gives us an incredible scene that shows how skilled Reeves is as a filmmaker.

This is one of the standout scenes in the movie and I hope that you enjoyed our breakdown of it.

Now obviously I’d love to hear your thoughts so make sure you comment below and let me know.

I just wanna give a huge thank you for getting our last perfect scene video to half a million views and I hope you’re enjoying this series that we’re doing.

I’ve also just featured on Unleashing the Ghouls talking about why Batman and Robin is hilarious. It’s a really fun video so definitely go check it out after this.

If not, I dunno what’s wrong with ya but I hope you enjoy the rest of your week. You take care of yourself, I’m out, peace.