Justice League: The Grid Review leads into The New 52’s first mega event: Trinity War. Hinted in the epilogue of each volume it seems like DC have big plans for Pandora. After reading the predecessors to this book I’ve come to love the Justice League series. It’s changed a lot of my prejudices towards characters and I’m excited to see how this book could potentially alter my perspective on Cyborg, a character that I was previously not too interested in.

He’s had some brilliant moments in the prior three entries and I’m anticipating a big pay off after some of the plot elements that have been introduced previously.

Here’s hoping they don’t drop the ball with it as often happens with Mega Events. This book really could go either way and it will be interesting to see which side of the wall it falls on.

So with that out the way let’s jump into Justice League: The Grid.

The Justice League needs new members. Realising that in order to tackle the more overwhelming problems they face, they recruit. Similar to the ‘Woman Of Tomorrow’ storyline, they hold auditions on the Watch Tower and enlist the services of Firestorm, Element Woman and a mysterious Atom Girl.

It’s a brilliant light hearted beginning that’s a nice change from the world devastating events that the book’s often centre around. Getting to know the characters a little more intimately fills us in that Cyborg is connected to every computer on Earth, so it becomes alarming when someone uses this accessibility to steal all of the Justice League case files.

This is mirrored when an intruder somehow bypasses all security and breaks into the Batcave, stealing the kryptonite ring.

Knowing how this plays out overall in I was overwhelmed by how many seeds were planted in these opening chapters. It’s clear the writers were building to Forever Evil and had elements of it within all sub plots. Whilst normally this would distract from the main plot or feel unfulfilling due to it producing mainly set up, Geoff Johns still manages to create a storyline that most new comers will be able to invest in. 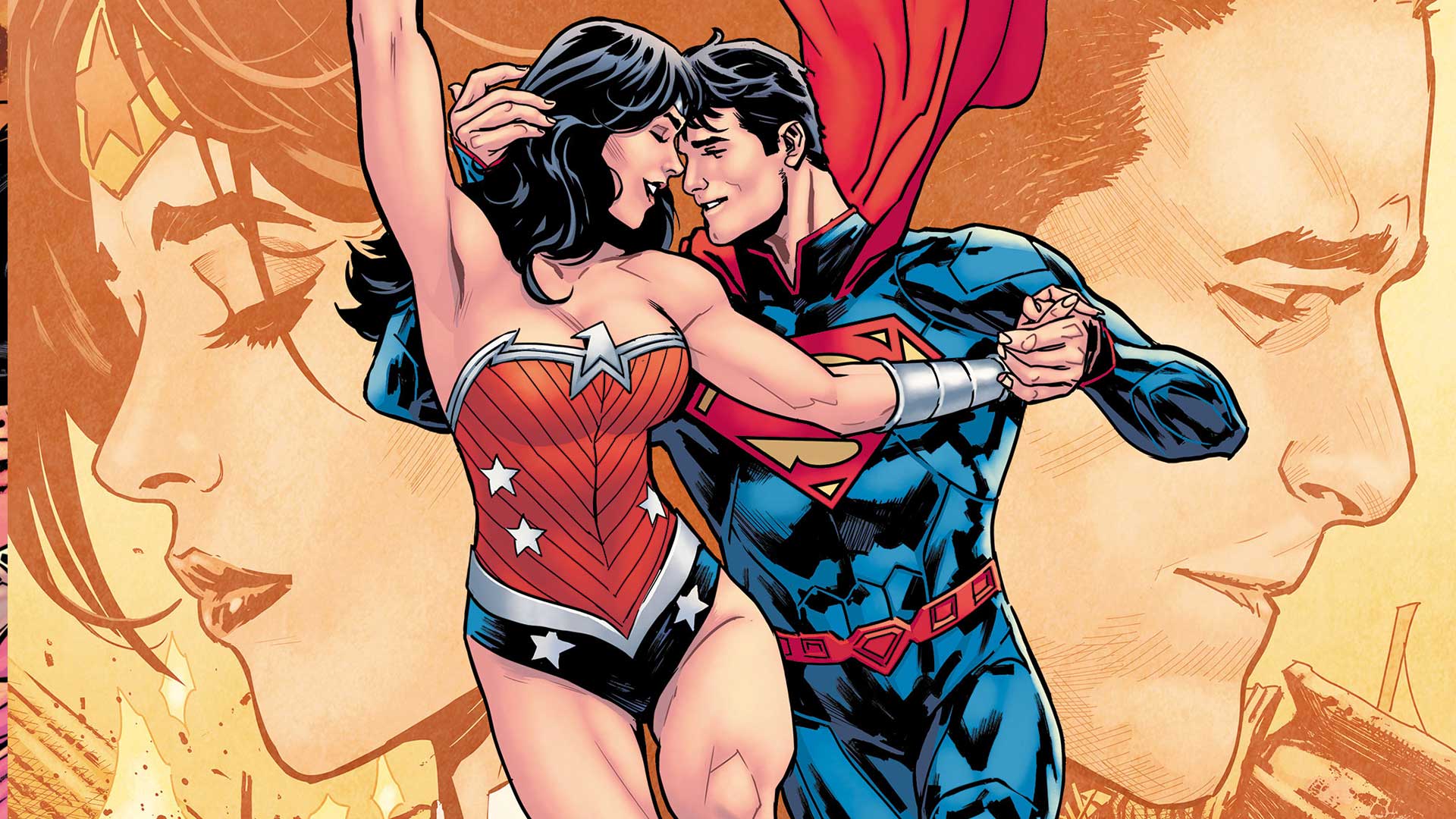 Confronting Diana and Clark after they attack Khandaq. Bruce reveals that he knows all about their relationship. Instead of being mad he actually seems happy for the couple, which shows that even if it endangers the team, Bruce still wants what’s best for his friends even if he goes about it in the worst way possible.

Revealing his own secret, Bruce let’s Clark in on his contingency plans. A motif since The Tower Of Babel I feel like the ‘Batman has a plan for the Justice League’ is relied on a bit too heavily in these comics. It keeps reappearing over and over and honestly I feel like DC need a new idea. A lot of the New 52 is rehashed plot devices and it’s a shame as there is still a lot more to explore with the characters that could be there in it’s place.

It doesn’t detract massively from the plot and I believe new readers will lap it up, however older ones may find boredom in this retread.

Feeling like filler, the mid section of the book has a strange alien attack the Watch Tower and with the help of Martian Manhunter the newcomers take it down. It’s the story you’ve seen 100 times before and it isn’t really anything special here, making for a slightly mundane mid section.

And it doesn’t exactly pick up.

Tying into Trinity war, the last section feels majorly disjointed. We follow a mysterious woman as she visits a fortune teller, warning her of the war that is coming. Acting purely as setup for the next Volume this issue feels like a lot of wasted time. Newcomers won’t know what’s really going on and the book’s overall design doesn’t aid that. We are given hints of what’s to come but when it takes another book to appreciate, this one it feels slightly disjointed.

Figuring out the reading order

For the final chapter we jump to the conclusion of Trinity war, missing out 11 issues with no real warning to the casual reader. I remember the first time I read this. I had no idea what was going on and even with required knowledge I now have, this book feels anti-intuitive to how something should be read.

In all honesty I would’ve preferred the time jump to be missed out and to have one less issue that instead informed you to pick up the sequel. Whilst you are able to see what the overall outcome of the war would be you don’t really get the reward from going on the journey to get there.

Due to this the finale feels shallow, lacking the development that is needed to appreciate its ending it completely under delivers. 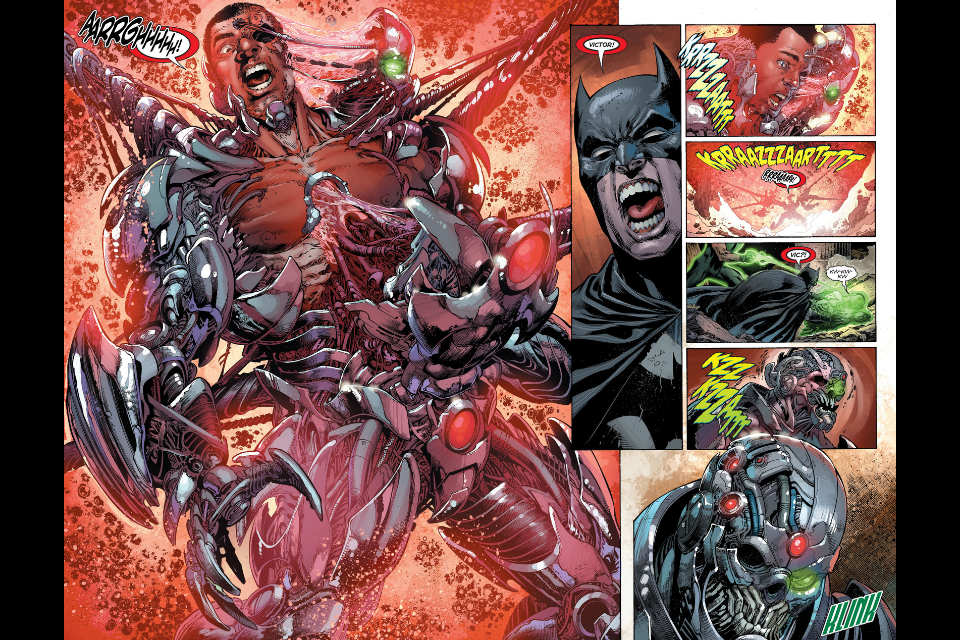 Justice League The Grid is extremely difficult to rate. It’s a mish mash of issues that have been passed off as a trade. Whilst it features several elements that would pay off later down the line it sort of feels like you’re being short changed in calling this a Volume.

This is the first time I’ll ever do it but I feel like I have to give this two scores.

If you are a seasoned fan reading the Justice League New 52 run, aware that at the book’s mid point you should go off and read Trinity war, then you’ll probably enjoy it. So for the die hards I give it a…

However, if you’re a casual reader picking this up purely to read a Justice League Story, you will be massively disappointed. Requiring a lot of pre-knowledge and context as to how you should approach the book, it will probably leave new fans bewildered. I can imagine that the book feels like it’s going nowhere and the time jump will likely leave you bamboozled.

Due to this I would recommend that you steer clear until your knowledge on the events that follow are stronger. It doesn’t feel like a complete story and you probably will be more out off than you are intrigued.

That’s why for newbies I’m giving this a…