Skip to content
Injustice Gods Among Us: Year One: Volume 2 Review

Injustice Gods Among Us: Year One: Volume 2 Review by Deffinition

Injustice Gods Among Us: Year One got off to an incredible start. The introductory book was outstanding in its reimagination of long standing characters and the graphic novel rightly deserved it’s 9.5/10 score. Picking up where that story left off is Year One: Volume 2. Competing directly with it’s prequel it will be interesting to see whether this follow up can match up to the high bar set by its predecessor. I can’t wait to see if it delivers.

So, with that out the way let’s get into Injustice Gods Among Us: Year One: Volume 2.

‘It’s been one month’

Discovering that Lex Luthor survived the blast in Metropolis, the League quickly draft him into their ranks. Realising that their actions thus far (see Volume 1) may have garnered them negative attention, the initial issues deal with the public perception of the team and how their new ‘Head Of Propaganda’ – Luthor, can sway public favor. It’s a dramatic opener that really cements the book as one of the best Elseworlds tales ever. Never has such effort been put into dissecting the public image of political figures and there are several real-world counterparts that can easily slot into place over the League members. This is a brilliant way to make the graphic novel relatable and I think many will see the clear similarities between our own Governments and this fictional one.

We are of course meant to side with Batman, however, Superman’s point of view becomes easy to side with, especially when the forces of Darkseid attack the planet. In what is a standout moment of the storyline we see Superman conversing with The Flash at super speed mid-battle. Debating back and forth it adds weight to the work and seeing Superman come to terms with the fact that there are some enemies that he must murder so that they can never harm again is a character-defining moment.

Branching off into all aspects of society the book dissects Gun Control, Smoking, Drunk Driving and much more. Seldom touched upon in comics, these aspects truly elevate the book and it becomes an enthralling read that breaks down the ugliest parts of society. Arguing how they should be handled from a conservative and democratic point of view it covers the main political mind states of many and the creative team has done an outstanding job of intertwining a vast amount of political subtext in every page and panel. 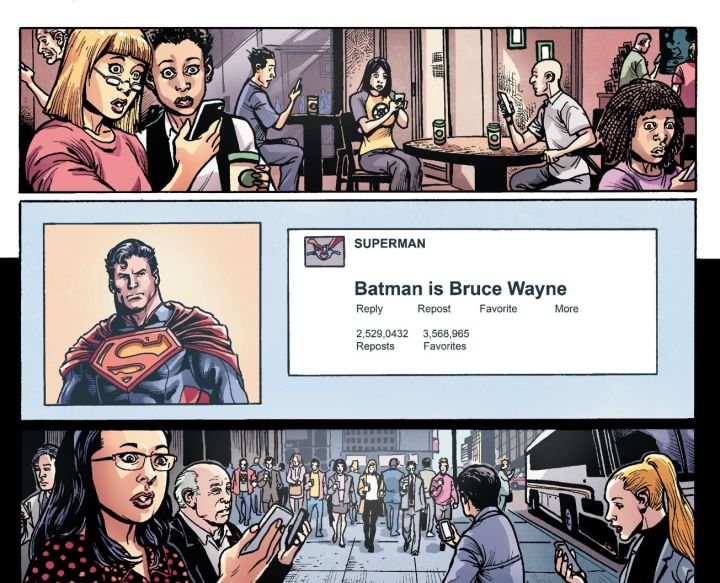 Realising that Batman has infiltrated Superman’s ranks through the shapeshifter Martian Manhunter. The Regime reveal his identity to the world. Stopping their initial broadcast through a hilarious contingency plan, Superman and the ilk still get the message out through social media. It’s Donald Trump levels of communication and watching Superman become a Twitler is shockingly close to reality. Abandoning the cave, the Bruce Wayne persona is no more and the silent truce that existed between the opposing sides is now gone. This is all out war.

‘No one should have ta justify the greatness of a mustache’

In one of the highlight arcs of the run, Taylor showcases how brilliantly he can balance books tonally. Injecting some much needed humour into the work, we see Harley Quinn and Lobo interact with one another as the latter attempts to bring the villainess into the clutched of Superman. Watching the two banter back and forth is brilliant and the proceedings are executed in a way that makes the subplot engaging whilst also progressing the main storyline. Discovering that Lex Luthor has developed a magic pill that can turn the user superhuman, Batman and co realise that they majorly have to step up their game if they are going to be able to compete. 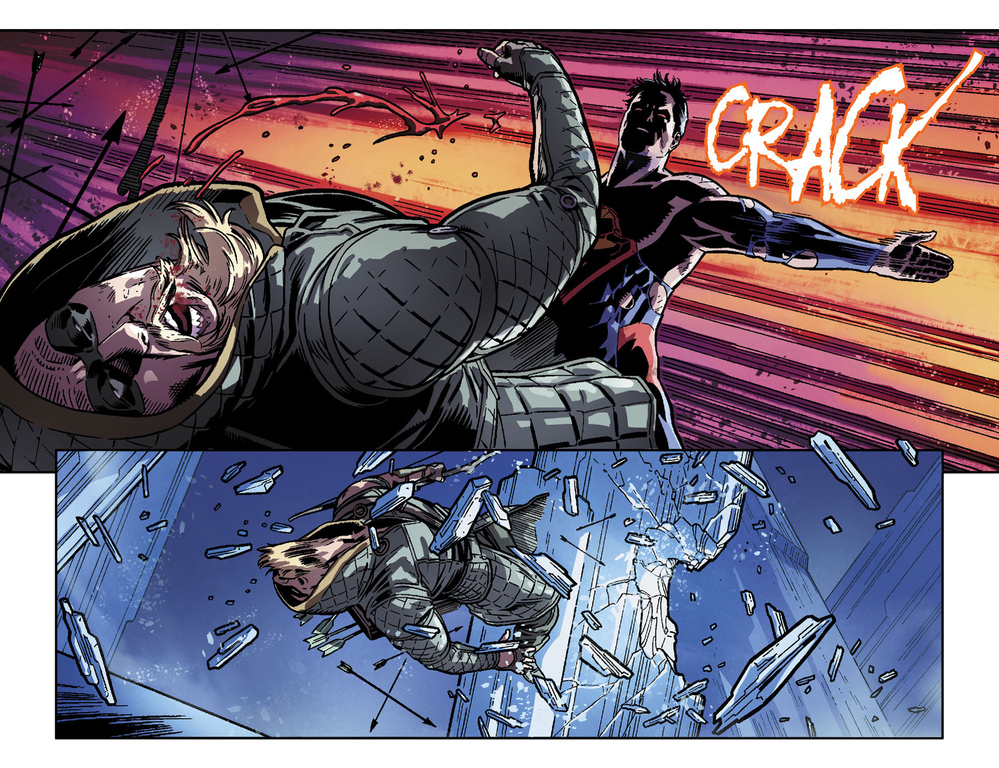 ‘They tried to kill me’

Launching an attack on the Fortress Of Solitude, Batman attempts to take back control. As he enacts a plan to kidnap Clark’s parents the issue delivers classic moment after classic moment. The final few chapters are absolutely unforgettable and will have you turning page after page to see their eventual outcome.

Battling back and forth with Captain Atom, the Man Of Steel is nearly wiped out when Atom self-destructs, blasting ol’ Supes with the force of a seven megaton nuclear bomb.

Barely surviving the explosion, Superman sees no other choice than to cross the line and tip the balance in his favor. As he murders Green Arrow we get a tear-jerking death that depicts the sacrifice of a true hero. I cried throughout and watching Arrow do whatever it takes in order to make the world a better place is heartbreaking. His life ends as he thinks about how lucky he was to spend most of it with the girl of his dream, which is something I’m sure that many can relate to and will pull at the heartstrings of all. It’s the perfect set up for the climax of the book and it delivers in all areas, catapulting this series to one of the best DC books ever created.

As Batman intends to synthesise the superhuman pill, Superman storms the cave. Mercilessly beating the Dark Knight from pillar to post, Batman cunningly buys time for the synthesis programme to complete. It’s breathtaking to watch The Caped Crusader once again have his back broken and seeing Alfred rush to his defense is one of the most bad ass moments ever depicted in comic books. If you weren’t on board by this point you will be now. 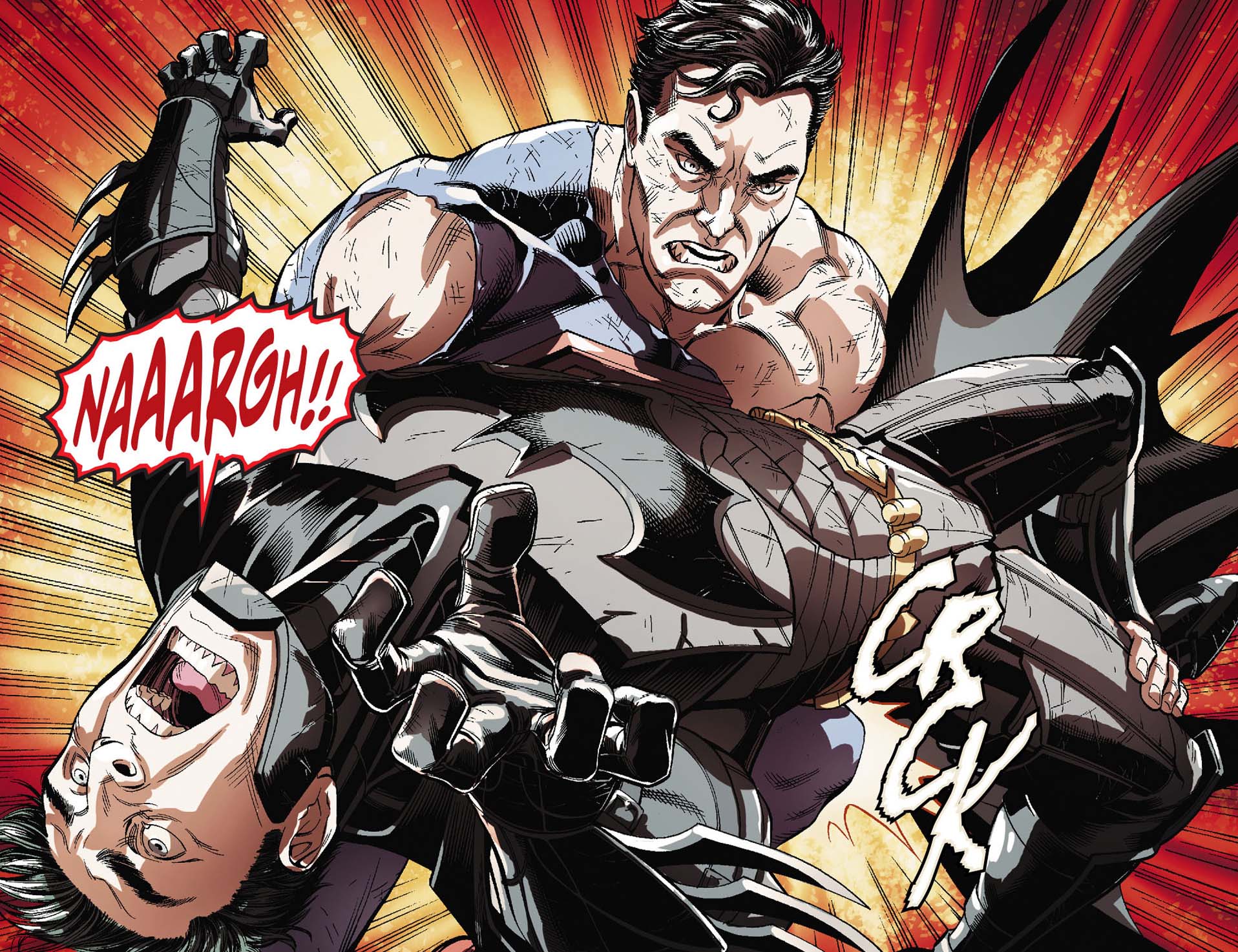 Perfect from start to finish, Injustice Gods Among Us: Year One: Volume 2 is the best that a comic can be. Packed with legendary moments, it’s outstanding in every aspect and near unrivaled in modern day works. I cannot stress enough how much you need to read this book if you haven’t already. It is absolutely incredible and deserves to be heralded as one of the greatest ever made.

Brilliant from beginning to end, Volume 2 gets a…