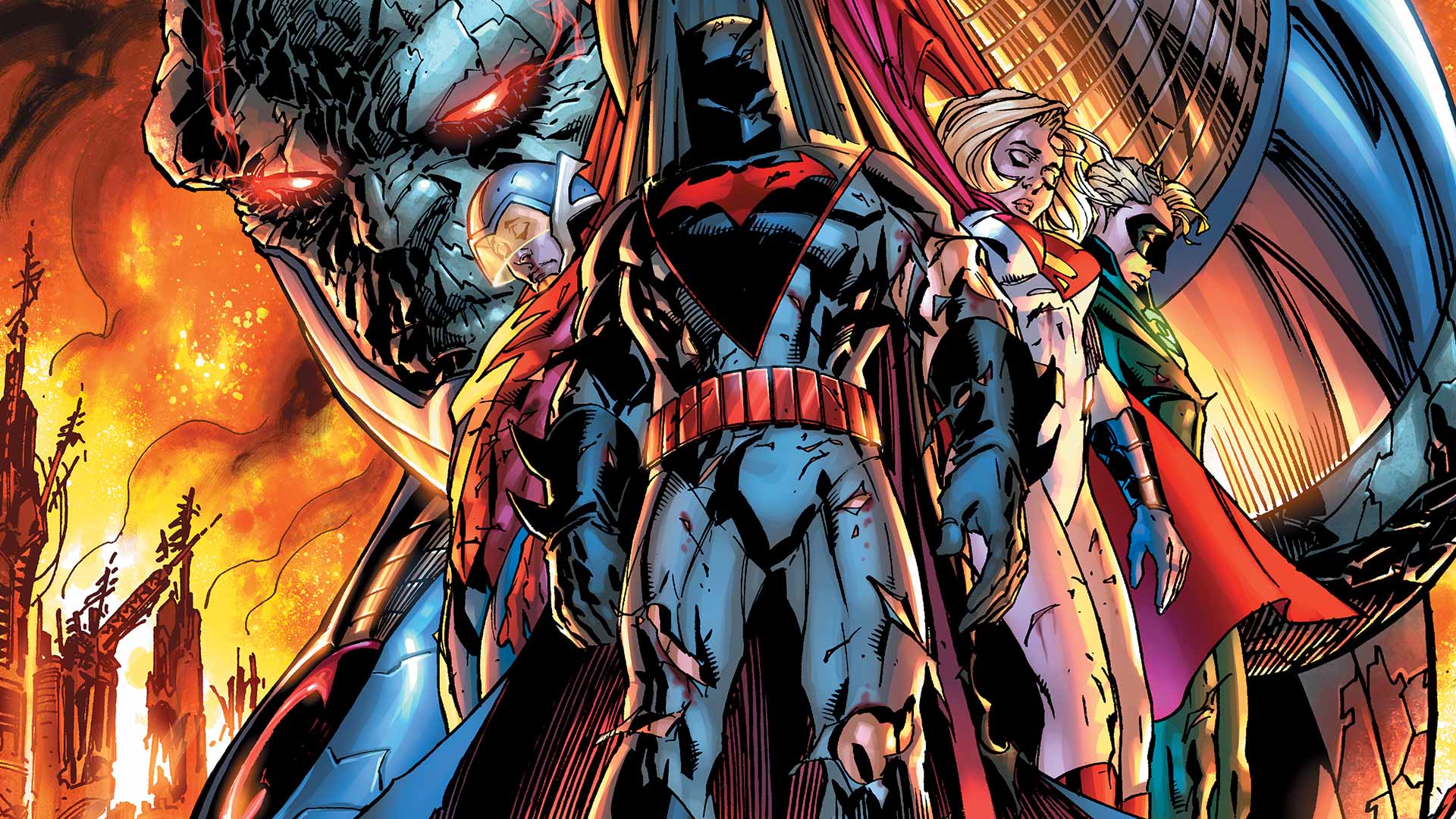 Earth 2: World’s End got off to a terrific start. Re-establishing the world and putting down some ground rules, it successfully cemented Earth 2 as one of the publisher’s best books.

The previous volume ended on a huge cliffhanger that saw Darkseid’s Return and I can’t wait to see what he brings to the final chapter of the story.

As with all of my graphic novel reviews, there will be some spoilers so it may be worth skipping to the score if you want to pick it up with fresh eyes.

With that out the way let’s dive into Earth 2: World’s End: Volume 2!

Sitting on the throne of Apokolips, Darkseid rules once more. As the forces of Earth battle to destroy his army we see the likes of The Flash, Mister Miracle, Superman and more being pushed to the limit. It’s an amazing opener that jumps from perspective to perspective without feeling too over convoluted and each fight ties neatly into the next.

However, those not completely caught up on Earth 2 will struggle with the sheer amount of characters that there is and even I found myself racking my brain to remember exactly why some were in the situation that they were. This will make the book unfriendly to most readers but it is definitely worth your time to take a refresher course before picking it up as it adds a lot of weight to the showdowns that would not be present if you just picked it up out of the blue.

The hero’s deaths come thick and fast and provide a real gut punch, giving the book impact early on. Mainstays of the series are wiped out and whilst these sendoffs may happen in quick succession to the point that they don’t allow much room to grieve, they do streamline the story.

What I love about the book is that it feels more like a tale of survival, rather than a war one. All of the protagonists that we encounter seem to have a Plan B that will allow them to wait out the war, rather than fight it and it adds complexity to their choices and showcases that Darkseid is intimidating enough to require fallbacks. 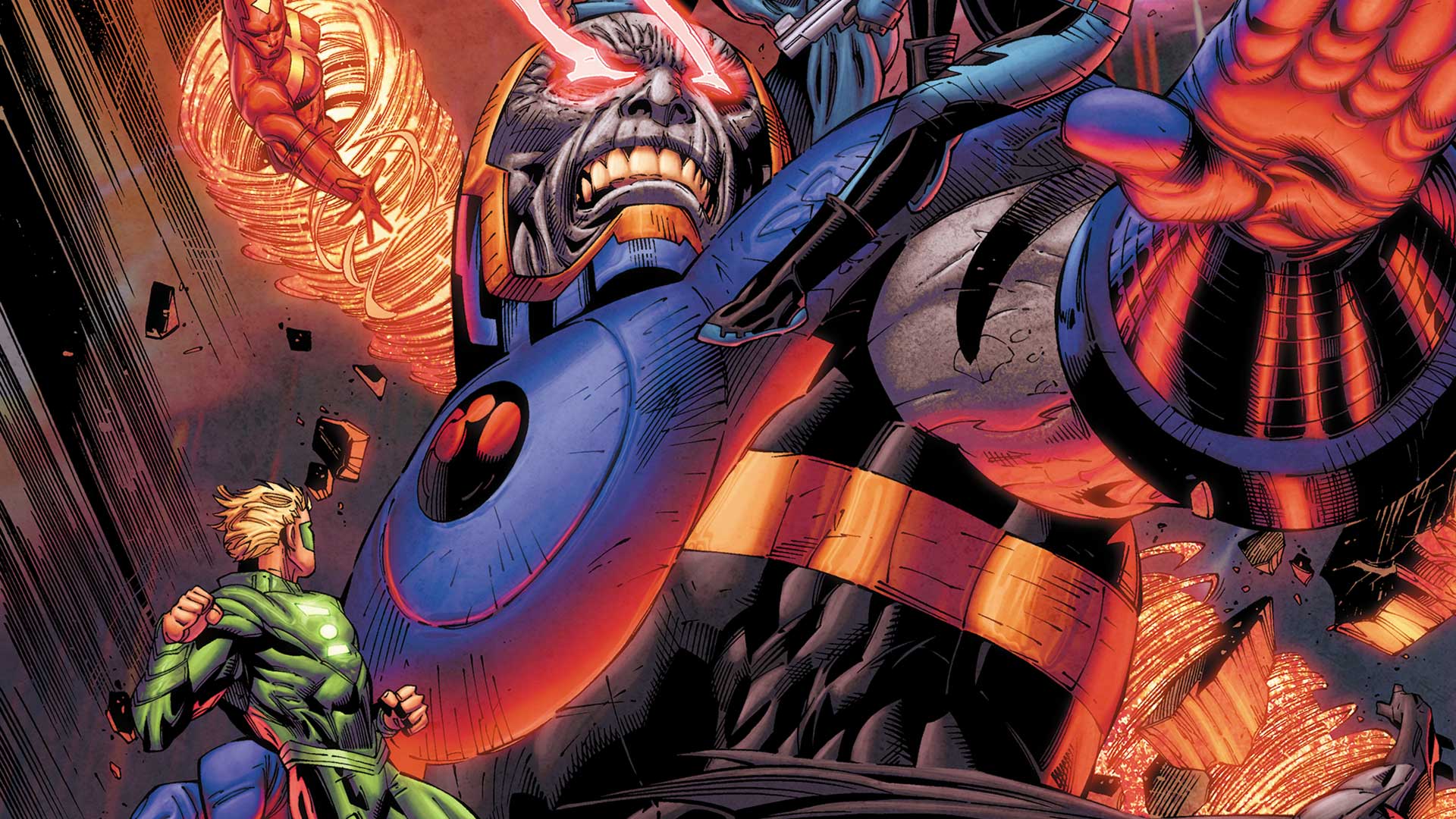 ‘At the mercy of Warring Gods’

Interjected throughout the high-level conflicts are the tales of the surviving humans that are hidden below the surface. Cramped and desperate, this close-knit group presents a recipe for disaster and the creative team lay subtle narratives like racism, fear of the other and more into these scenarios. They help to elevate the book and it’s easy to find modern-day metaphors in things like the xenophobia that exists within western politics.

It really hit the nail on the head for me in showing how if this was to really happen, most of the population would probably want certain members expelled from the haven because of things like skin colour and place of birth. This provides a lot of intrigue and made me question whether the planet was even worth saving if people have nothing but hate in their hearts.

With the firepits of Earth raging once more, evacuation becomes the top priority. Every sect of heroes has their own plan which makes for an extremely diverse read. Some wish to flee the Earth completely, others wish to take the DNA of every living creature on the planet to create new life and some want to have their brain put in a jar, blasted into space to hopefully find life somewhere else. On the surface it sounds bonkers but it allows us to get behind certain plans and pray for their success, which is of course, highly engaging.

The sense of urgency is thorough throughout and it all comes to a head when the heroes take the fight to Darkseid himself. It’s a brutal and unforgiving battle that expertly shows just how fearsome the antagonist is. Rarely are we reminded of Darkseid’s true power but World’s End does a fantastic job at placing him back as the most formidable fighter in the DCU.

The ending of the book really pulled the rug out from under my feet but felt fitting for a series where ‘anything can happen.’ Reflecting on it days later, it was a masterstroke that I applaud due to its audacity and I can’t wait to see what it holds for the future.

If this was to be the end of The Earth 2 series, it would be an extremely fitting one. Dower and depressing throughout, it’s a true tale of war that doesn’t pull any punches. This ensures the work is impactful and it is definitely one of the strongest stories in the series thus far.

Brilliant from beginning to end. Earth 2: World’s End: Volume 2 gets a…