If you’ve read my review of the previous two volumes of Earth 2 then you know I’ve had a whaaaale of a time.

And by Whale of a Time I mean I haven’t enjoyed them that much.

And by haven’t enjoyed them that much I mean I absolutely hated them, pulled the books off the shelves, used them as toilet paper, smashed the toilet in with a sledgehammer and then burned down the house.

This book has Batman on the cover and we all know how much I love him so there could (could) be a chance that I like this book. I’m interested to see how they bring the character back after his demise in Volume 1. Casting all of my past experiences aside with the run. I’m ready to dive in and wipe the slate clean.

So with that out the way, let’s jump into Earth 2 Battle Cry.

We initially follow the new Atom as he deals with the psychological effects of being a superhero. Watching him go through therapy before he ventures out on mission is a nice touch that adds a side of humanity to the anti hero that was lacking in the previous volumes. As he is dispatched to take down his target he is interrupted by a new, mysterious, blacker, gun toting Batman.

It’s nice to see at least some form of the Caped Crusader back in these books even if his enigmatic persona keeps you from fully connecting with him and his return is a welcome one.

After the world gets warned that a Red Lantern, Destroyer Of worlds is coming, we rejoin our trinity. 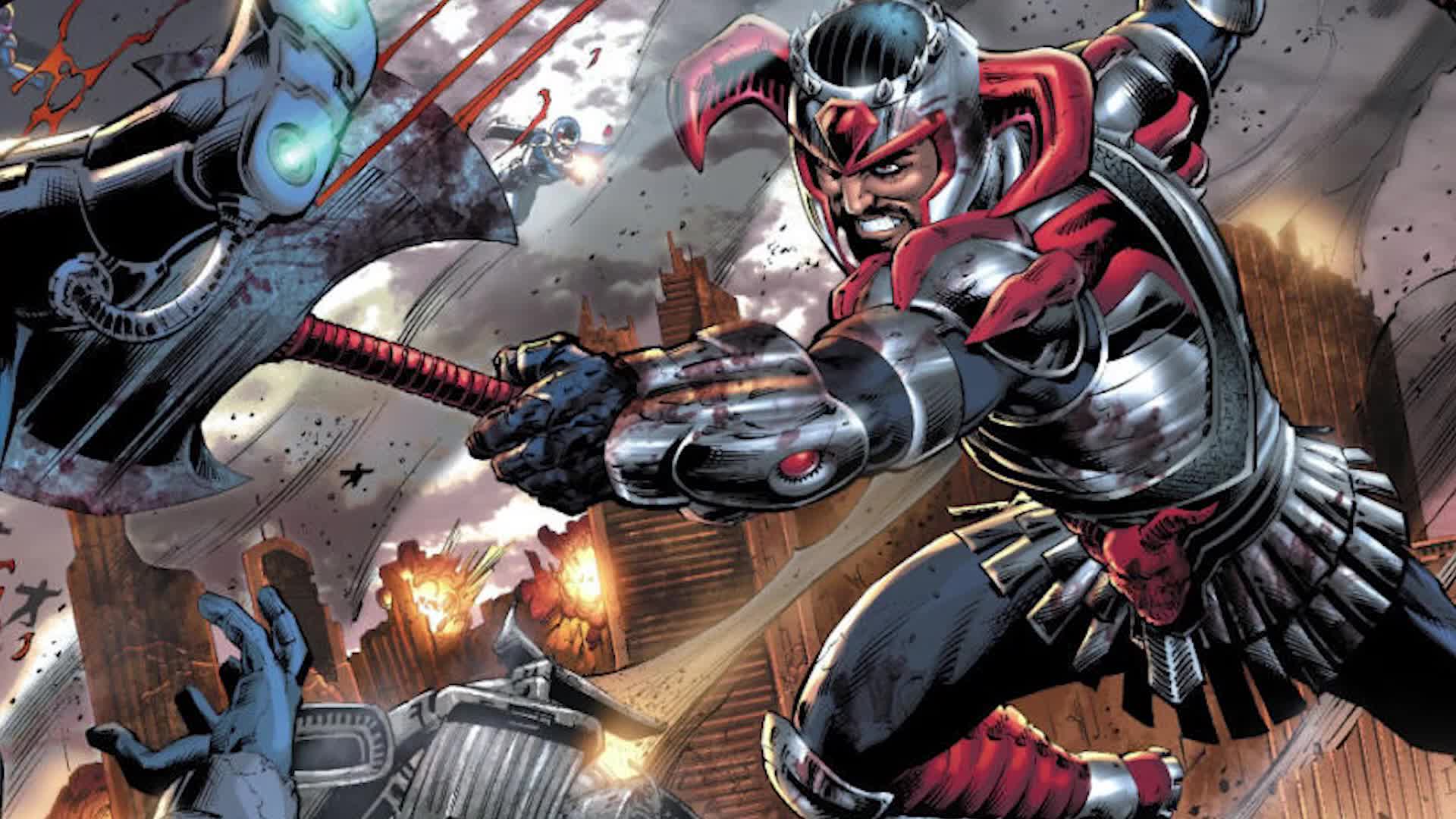 It’s nice to see the new Flash, Green Lantern and Doctor Fate working together as a unit. They are definitely some of the standouts in the run so far so I loved seeing their dynamics. It’s peculiar that the focus is often shifted from them in these stories as they are by far its most appealing aspect. I’ve no idea why in these volumes they always appear at about Issue 3 onwards but the wait is always worth it.

Launching an attack on Steppenwolf, the midsection of the book builds towards a satisfying battle.

Scott should be commended for her ability to draw large scale battles and every action scene that the artist pencils is…well..a work of art.

In the lead up to the Justice League film which releases in less than a month (at the time of this review). It’s nice to have a Steppenwolf centric story here to act as a refresher course for those wishing to see the villain before he’s brought to life on the big screen. Complex and militaristic the villain acts as a great foil in his plans for world domination.

Beating every hero that he comes across he feels completely overwhelming and it’s shuddering to think what would happen if his plans had come to fruition.

Luckily he is taken down…by Superman..but that isn’t necessarily a good thing.

Similar to Wonder Woman, Steppenwolf has taken Superman, corrupted him and turned him into a more tyrannical force than one could ever imagine. Murdering Steppenwolf, The Dark Superman decides that he will now infact rule the world. Ending the main storyline on an outstanding cliffhanger that finally…finally..got me invested in Earth 3.

We end the Volume with an Earth 2 Annual story that focuses on Desaad, one of Darkseid’s henchmen. It’s a strong closer for the story and whilst it doesn’t tie into the overall plot it’s still a brillaint way to end the trade.

I’m in shock. I thought that I would absolutely hate this graphic novel but it was great. Robinson really hits his stride in this book and all of the setup from the last two middling arcs finally pay off. Gone are the arduous talking sections, replaced with a tightly focused story that really gets you to appreciate the potential of these new characters.

This is a huge upswing in quality and whilst it took a lot to get the bad taste of the last two volumes out of my mouth, this managed to. Whilst not perfect, I still really want to see what comes next and that’s a huge turnaround for a title that I was bored of by the second issue. If you’re struggling with the first two volumes like I was, stick with it for this. It seems like the creative team finally know what they’re doing.