Jeph Loeb and Tim Sale are back with their phenomenal colour series! So far I’ve read and reviewed Spider-Man: Blue and Hulk: Gray and both have been outstanding. Perfectly recapturing the original essence of their key characters they updated aspects of their origin stories and presented them in a stunning fashion.

Contributing to that trend is Captain America: White. This graphic novel focuses on one of Marvel’s best super heroes to boot and I can’t wait to see if the two creators are able to catch lightening in a bottle once more.

As with all of my reviews, there will be spoilers so it may be worth skipping to the score and coming back to this analysis at a later date if you want to remain unspoiled.

This promises to be a blast so with the intro out the way, let’s dive into Captain America: White!

Back In My Day

After just waking up from the ice, Cap recounts the first time he saved Nick Fury and The Howling Commandos. Loeb and Sale have always had a retro style, reminiscent of classic artists like Max Fliescher and Will Eisner, and White is no different. Perfectly recapturing the aesthetic of a 1940s pulp novel, the book gets off to a flying start with its Dan Dare-esque tale of battling the Nazis across Europe and Africa.

It’s an inspired choice to set the majority of the story in the era as it allows us to view Captain America’s reflective thoughts on Bucky’s passing and the guilt he feels is moving in a way that adds a wealth of emotion to the story. It’s difficult not to feel empathetic towards the titular character and for every triumphant moment that Cap and his sidekick Bucky have, there is an undercurrent of sadness due to the hindsight of how their relationship would eventually come to a head.

As always, the creative team manages to build a personal story from very little and the nuances that are often included within Loeb’s dialogue paint a deep picture of the character’s thought processes and inner emotions. The book instantly cements itself as one of the best Captain America stories and the quality is near unrivaled throughout. 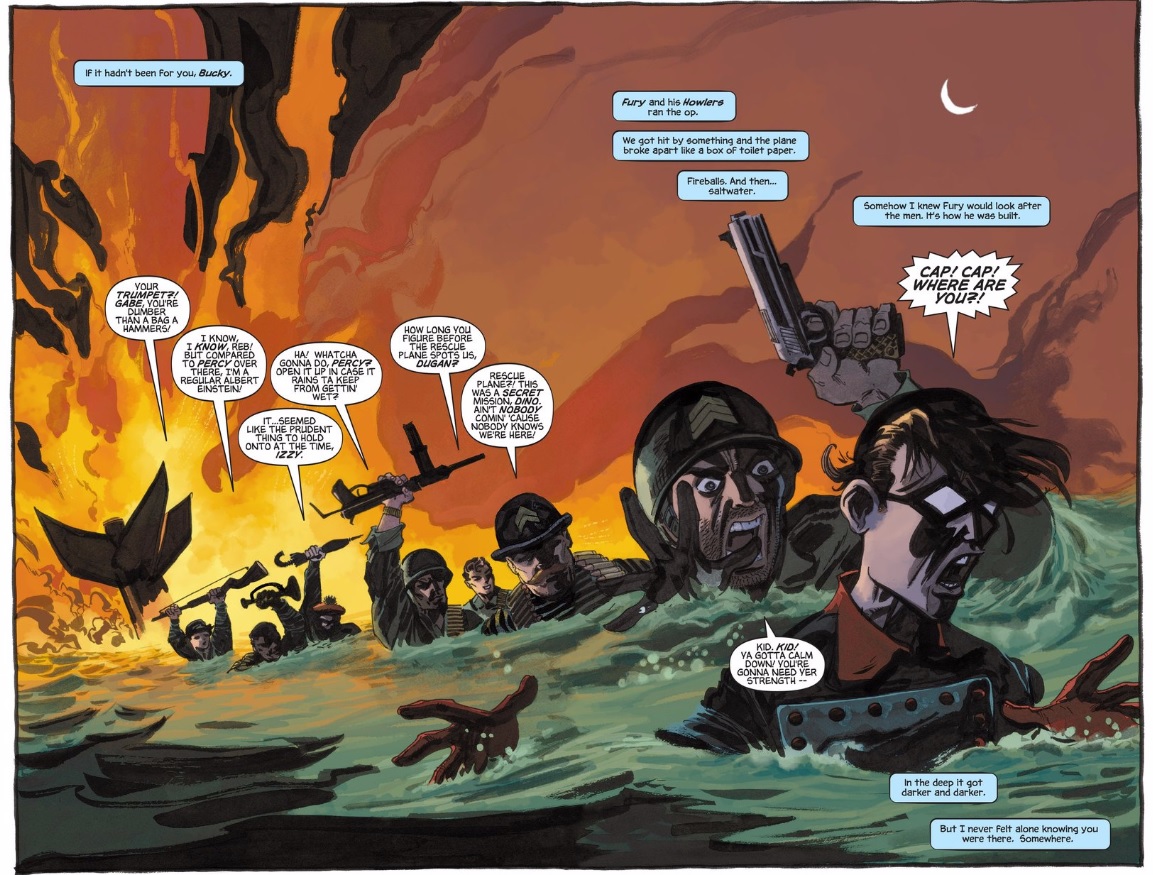 Fans of films like Where Eagles Dare and The Dirty Dozen will instantly fall in love with the story and it was fascinating watching the group navigate the Nazi occupied territory in the dead of night. There is an atmosphere to each page and panel that adds an eerie feeling to the work and watching the commandos evade capture time and time again never gets old.

However, this is a five-issue run and the stakes need to rise in some form or another and White’s main villain comes in the form of Red Skull. Leading a Nazi rally, the Cap’s arch nemesis makes a grand entrance that rivals his one in Infinity War. Capturing Bucky, he holds him hostage and let’s Cap decide what is more important: The boy or The Mission.

Whilst it sounds cliched on paper it’s expertly told and highlights how Bucky’s immaturity and need to prove himself ultimately leads him to put himself in danger. It questions Steve’s need for a teammate and also showcases how irresponsible it could be to have him enlisted. However, as readers, we know that the desperate times of the war called for desperate measures and this allows us to relate with both arguments as to Bucky’s inclusions in the campaigns.

Tying the arc together is a bombastic finale that takes place on the top of the Eiffel Tower. Sale excels with his artwork and his Paris skyline dotted with spotlights and zeppelins is a wonder to behold. Cap saves the day but it’s still filled with regret as he knows he couldn’t be the hero that Bucky deserved in the end. It’s a downtrodden note to end on but one that often mars the Captain’s storylines and feels like a necessary conclusion here.

Captain America: White is a standout story for one of Marvel’s greatest icons. Perfectly paced, written and illustrated it is another classic under the creative teams belt.

If you’re a diehard Marvel fan or just getting into the Comic Book Genre, then you owe it to yourself to pick this up.