This article we’re breaking down the new horror Relic.

The 2020 movie has a lot to unpack from it and throughout this, we’ll be going over our interpretation of the movie and the true meaning of it’s ending.

Obviously there will be heavy spoilers here so if you haven’t had a chance to check out the movie yet then I highly recommend that you turn off now.

With that out the way, thank you for clicking this, now let’s get into our breakdown of Relic.

Ok so Relic predominantly follows three women from the same family. They are Edna an elderly widow in her winter years, Kay her daughter and Kay’s daughter Sam. The movie is very much about lineage, inheritance, and how we must care for the ones closest to us as we are probably fated to follow in similar footsteps to them as we grow older.

Though the movie apes hereditary in many ways, I found that film had a far more bleak ending than Relic which, depending on your interpretation is about acceptance and love.

The movie opens with Kay and Sam arriving at Edna’s house after neighbors have noticed that she hasn’t been on the property for a long time. Kay and Sam are sort of estranged from Edna and they have pretty much abandoned her to go and live their lives, likely seeing her as an inconvenience rather than an actual person.

They arrive to find her missing and thus they call on a police search to track her down. Edna randomly returns to the house one day as if nothing has gone on and on the surface, it seems like she is suffering from dementia. 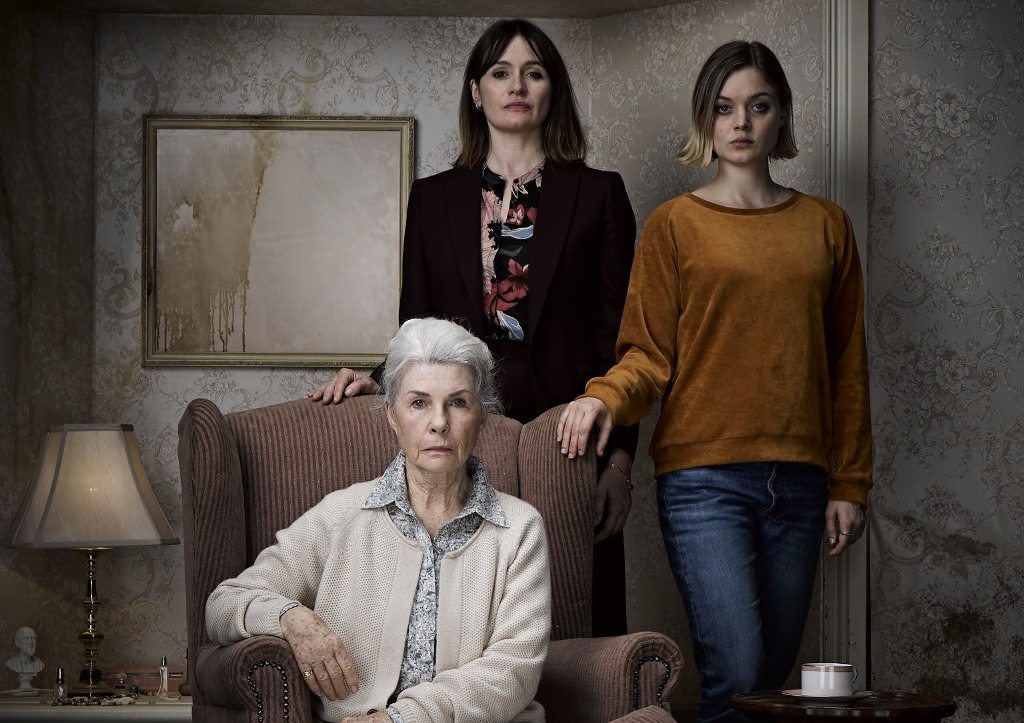 We see that it very much in a state of disrepair and symbolically this also speaks to Edna’s mental state which we learn has started to deteriorate. There are scatted notes throughout the property that all contain certain messages and these perhaps indicate her actual thought process and what goes through her mind.

I’ve sadly known a lot of people that have suffered from dementia and it’s clear that rather than having complete thoughts most of the time they act on instinct and a scattershot thought process that is represented here. Edna is clearly lost with no one to guide her and she leaves food out for a dog that died years ago, leaves the bath running, and is clearly in need of care.

Kay makes up excuses such as having work but deep down I think she knows she has neglected her mother.

Now though the movie sort of teases at the supernatural, I do think that there are actual real-world indicators of what is causing the hallucinations and so on. I will be going through both possibilities and you can decide what ending you interpret the film as below.

Black mold is often used throughout the film and in real life this can cause a lot of issues. If you’ve seen our Haunting Of Hill House breakdown you’ll know that mold in that could also be used to explain away the supernatural occurrences and I believe that it also makes a firm case here.

Black Mold is extremely toxic and over time it can cause infect your brain neurons and cause a wealth of changes. Living amongst black mold over time can cause dizziness, depression, breathlessness hallucinations, and even death.

It’s said throughout the film that there may be a presence in the house, however, I believe that it can be attributed to a number of things. The boy with down syndrome could have potentially been coming in the house and going into the walk-in cupboard. Though his parents told him not to he still hung around the property and may have re-entered when he thought Edna was gone.

There is also the possibility that this is Edna herself who got lost in the labyrinth-like area within the house that due to the mold caused her to hallucinate and believe that the house was shifting, similar to what we see through the perspective of Sam.

A giant clue that adds weight towards this happens when Kay and Edna hear something is in the walls and look up at a giant mold stain which I believe highlights what is really going on. Edna was of course missing at this time so it is a possibility.

There’s also a large black mark that appears on Edna’s chest and later on Kay, suggesting that this is linked with the mold, family and the grounds itself.

At one point Edna tries to eat photographs and bury the albums in order to stop the house from eating the memories which I think represents living in the property, amongst the mold has caused her memory to deteriorate rapidly. This is likely why she fled from it in the first place and then returned after forgetting why she went away in the first place.

The presence is felt throughout the entire house because the mold runs throughout the walls and ceilings and thus it’s impossible to escape whilst you’re on the grounds. Trying to navigate it eventually leads to you trying to navigate through a labyrinth in which it decays your mind and mental state. As mentioned earlier this is showcased by Sam who finds an almost maze like structure within the walls and she becomes lost.

Now whether you think it’s something more sinister or not the mold was clearly put in the film for a reason and it appears in Kay’s dreams when she recounts the history of the location. We see that her family members have lived on the grounds for generations and it is possible that their madness was linked to the state of the property and the mold infestation that has likely been through Edna’s house and the cabin that was incorporated into the house that Edna now lives in.

Kay has dreams of an old man in the previous versions of the house and we learn that this was actually her great grandfather. He sadly died of what appeared to be dementia after being abandoned by his family and I think this very much influences the end and the choice that Kay and Sam make.

Like most families, Kay wrestles with putting her mother in a home but compromises are made that sort of show that the children and grandchildren have changed and are not going to repeat the mistakes of the past. 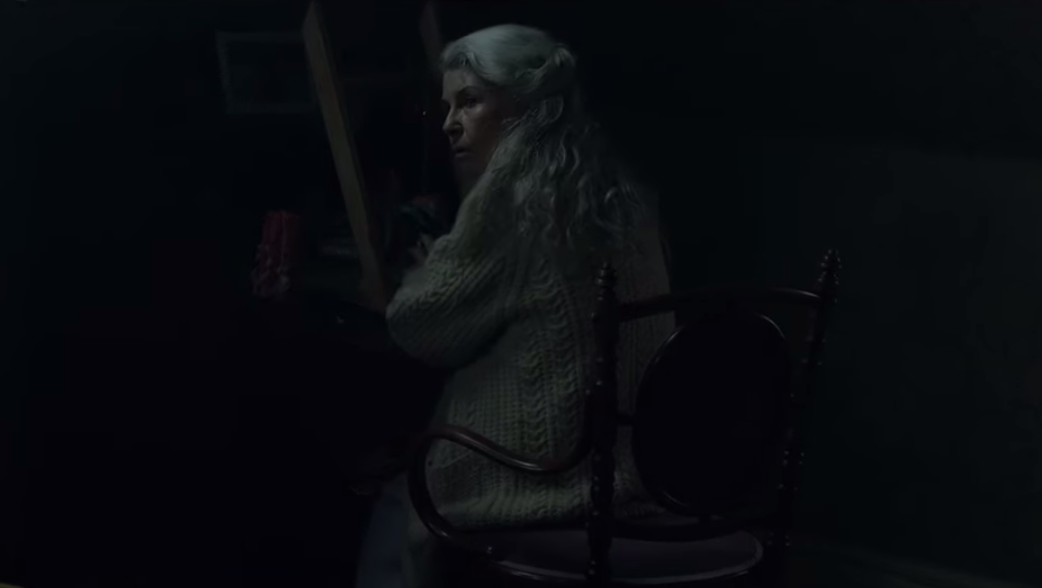 Now the movie kinda takes a big turn when Kay sees Edna stabbing herself in the chest in the bath. The water overflows and knocks out the power which makes Kay try and find her mother in the darkness. She finds her with her skin peeling off, revealing somewhat of a demon underneath it.

Now you can take this as a possession of the character and that something has been living in the house and on the grounds, preying on the family for decades. Opposing that though you could take this other form as the complete difference in personality that someone can gain through dementia.

Exploring the first option the movie does take a supernatural turn and it has Kay fear for her life as she’s chased by this monster. Kay ends up running through the labyrinth until she finds Sam. Together they manage to knock a hole through the wall and thus gain a way back into the house.

The demonic figure returns and Edna beats it with a pipe and Kay and Sam make their escape.

However, Kay hears her mother calling her name and she recalls how her great grandfather was abandoned too and instead of leaving Edna, decides to return to her.

They take it up to Edna’s bedroom and peel off the rest of Edna’s skin, leaving a rather pathetic and sympathetic creature infront of her. She tucks it into bed and climbs in with it, not long after joined by Sam. We see a black mark on Kay’s back similar to the one on Edna’s chest and they all huddle together with Kay likely being doomed to the same fate that her mother was.

Now as we said there are really two ways you can take this, either the demon on the property has claimed another victim of the family and it will repeat this process with Kay and likely Sam.

Instead though, I take the ending as somewhat of a metaphor on family duty that is disguised as something evil. Throughout the last few years Kay has watched her mother’s mental state deteriorate and she has tried to flee from it. Kay clearly didn’t care about the character that much and even though she was her mother she was happy to leave her. However, this ending shows me through Edna calling her name that she realises their family have all shared a similar fate in which they were abandoned and it’s likely one that Kay herself will fall victim too if she allows herself and Sam to run away.

The returning to this symbolic demon and caring for it instead of hating and detesting it shows that Kay is willing to look after her mother rather than to spend her life fleeing from it. She has accepted her responsibilities and though I believe that the mold made her and Sam manifest visions of something otherworldly the simple truth of the ending is that Kay and Sam will not abandon Edna.

It’s somewhat of a positive message, especially as we have confirmation that things will likely happen the same way to Kay and her mental state. However, she has raised Sam differently and instead of allowing Sam to run away from everything much like she did, she will have a brighter future filled with the love of her daughter. I think in the final shot she sort of realises what is going to happen to her mother and decides to stay with her.

So it’s a kind of pick your poison over whether you see things as actually demonic or as things that are caused by the black mold. Personally I lean more towards the latter especially due to my experience with people that have dementia and though often at times it can feel like you’re dealing with a completely different person to the one that you knew, this other form is not something to be hated and to run from.

We must show kindness as it could also happen to us one day and thus I feel like Relic delivers a strong message in the closing scenes.

Now what did I think of the movie as a whole, well though this is going to be a slow burn for a lot of people, I think that in the end the overall film and meaning behind it are worth the wait. There’s a lot going on here and though the cast is rather small, they all make an impact.

Horrors to me are at their best when they also deal with humanity and it was gripping to see this play out. I don’t think it quite matches the stature of films like the Babadook and Hereditary but as far as Horrors go I think this is better than most released this year and it will stay with you long after you watch it.

Overall Relic was great and it gets an…

Now obviously I’d love to hear your thoughts on Relic so comment below and let me know.