Year One is a title with a lot of weight behind it for fans of The Dark Knight. The motif is often used to endow stature to a book and let readers know that this has the potential to be a classic.

However, in my opinion, this title often disappoints and is banded about so frequently that it no longer holds any real meaning in terms of quality.

I’m here to find out whether Year One: Batman/Ra’s Al Ghul deserves the moniker or if like many others, it is just cashing in on namesake.

There will be some spoilers for the graphic novel here so it may be worth skipping to the score if you wish to pick it up and go in with fresh eyes.

With that out the way, let’s dive into Year One: Batman/Ra’s Al Ghul!

When a letter addressed to ‘The Detective’ arrives at the Bat Cave, it’s clear that The Dark Knight’s nemesis: Ra’s Al Ghul isn’t as dead as he would have us believe.

Recounting his quest for immortality, the letter depicts Ra’s journey to rid the world of the one disease that harms it the most: Humanity. Taking place in a Japanese paradise garden that bears fruits which offer immortality, the antagonist debates back and forth with another immortal on how to best to protect the world.

The book puts forth ideologies such as the need to quell overpopulation, genocide and more which adds gravity to the work. We as a species know that resources are finite and that we burn through them unnecessarily which makes it easy to relate to Ra’s mind state. However, there is no real justification for murder and this is where the graphic novel’s true strength lies. It puts forth an argument and debates the pros and cons of both sides which elevates it exponentially above your typical run of the mill Comic Book. 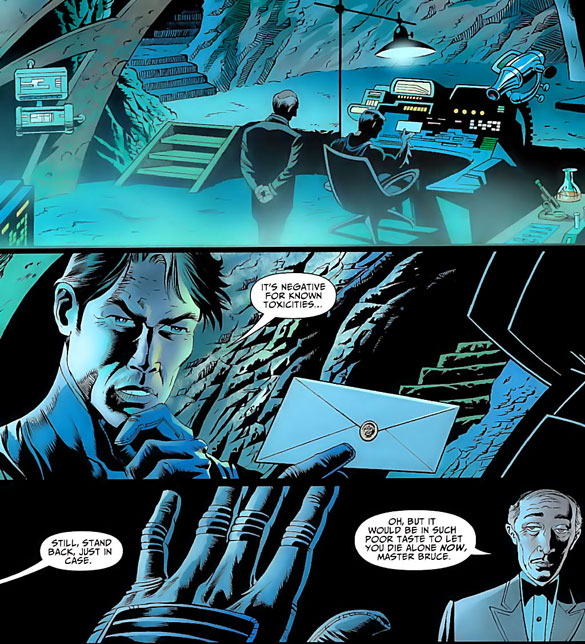 The Curse Of Immortality

The letter works as a warning to the true nature of Ra’s plan. In a final, desperate act, he has made all the citizens of Gotham immortal, cursing them tonever-endingg agony and an inability for the city to sustain the population.

It really showcases that though we all wish to live forever it is a selfish notion that would cause unrivalled carnage due to limited resources and space.

It’s a ‘be careful what you wish for’ take that I never really thought of and it signifies that maybe Ra’s isn’t so crazy after all.

The city becomes infested with the undead and whilst this would normally seem out of place, the writer and artist manage to ground it in a way that doesn’t feel too goofy. The art expertly captures the aesthetic of the pre 2000 films and it was great to see the Batwing from Batman Forever make an appearance even if that move is only so/so in my opinion.

All of this creates a perfect melting pot of a story that feels unique in its own right and by the finale I was turning page after page, desperate to see the climax.

Whilst the climax feels slightly underdeveloped in terms of how Ra’s was able to create such a zombie infested landscape, it still is a satisfying closer that feels like a fitting send off for the story. Packed with action and a showdown between The Caped Crusader and Ubu it’s a nice battle that doesn’t fully capitalise on the setup before but still feels satisfying none the less.

Being short in length doesn’t stop this story from making an impact. Whilst the ‘Year One’ title feels purely there for marketing reasons, it doesn’t stop the story from still putting forward thought provoking ideas and outstanding artwork.