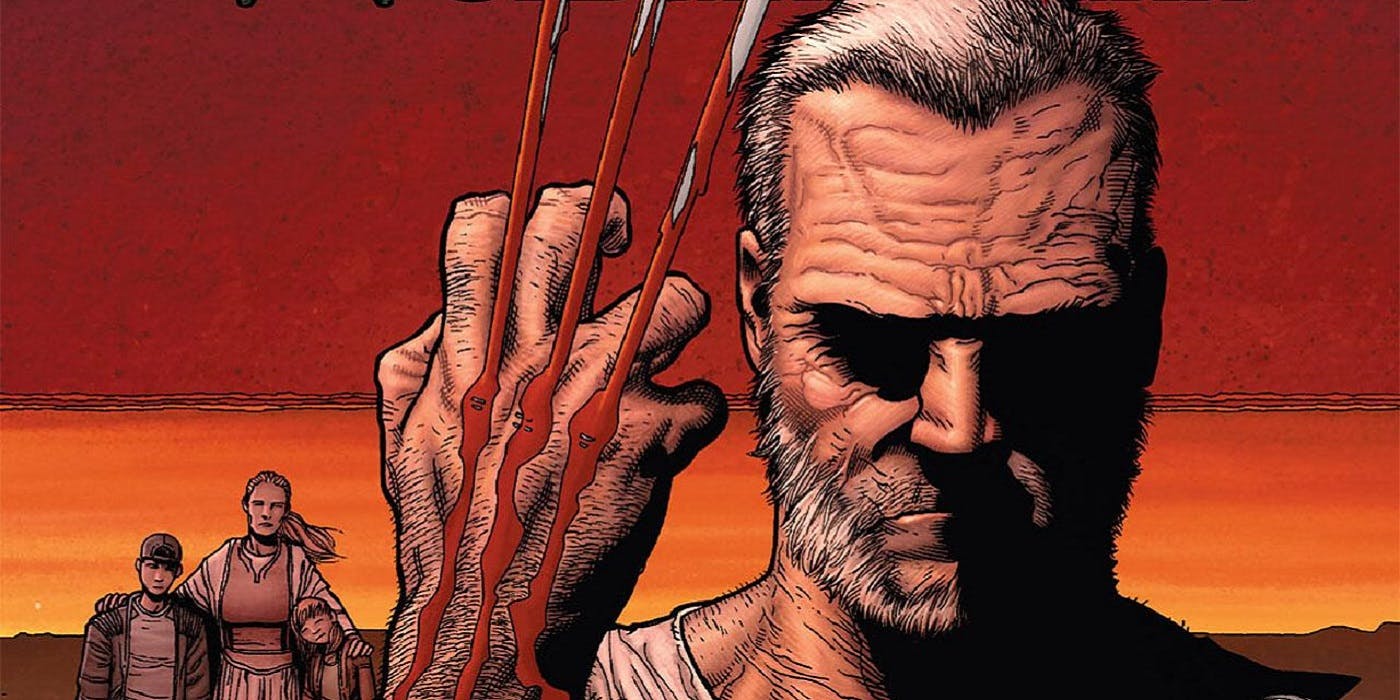 Wolverine: Old Man Logan is often cited as one of the best Marvel Graphic Novels ever made…and I’ve never read it. Whilst the film adaptation ‘Logan’ is regarded by many as the best in the genre, I have mixed feelings towards it. For every outstanding moment the movie had, it had an equally bad one due to either poor pacing or an unsatisfying reveal. Many have told me to overlook the problems I have with the Silverscreen Depiction and take the graphic novel up, explaining that the similarities it shares are minimal and that it is far superior to the adaptation.

Finally deciding to give the storyline a chance I picked up ‘Old Man Logan.’  This was purely to see if they were right or, if like the film, I’m just not seeing what everyone else is. This review will hopefully guide novices, like me, on whether they should pick up the graphic novel even if, like me, they don’t rate the film that much.

Having so much hype behind it, it will be interesting to see if it lives up to its reputation or if it’s one that should be left in the shadow of the now far more famous film.

So with that out the way, let’s dive into my review of Wolverine: Old Man Logan.

“I’m ready to take my beating”

A far cry from the most dangerous man on Earth, Logan feels like a former shadow of himself. No longer the Wolverine, he has stepped away from the limelight, desperate to escape his murderous past. Living in a barren desert, he is hounded by his landlords, the Hulk’s grandchildren, just the first of many villains he faces. Whilst they are rather cookie cutter and stereotypical bullies, they speak to a greater danger in the world, The Super Villains.

Fifty years prior to the events in this graphic novel, there was a Great War between superhero and supervillain and surprisingly the latter won. Now controlling all of the United States they rule over the surviving population with an iron fist.

From the off, I loved this aesthetic. Similar to the Dark Knight Returns and Kingdom Come, it paints its roster as old and past it but somehow manages to revitalise them in the process. Reimagining Logan as an old man on his last leg is inspired and it’s one of the most likeable incarnations of The Wolverine to date.

These types of portrayals have always astounded me. It’s great to see someone no longer in their prime remind themselves of how great they used to be and the book has the feel of an old Clint Eastwood picture like Unforgiven or Gran Torino.

When Hawkeye comes to Logan with a way to raise the money to pay back The Hulks, the protagonist is forced to become the Wolverine once more and travel across the US with the now blind sharpshooter. This is where the true plot begins. 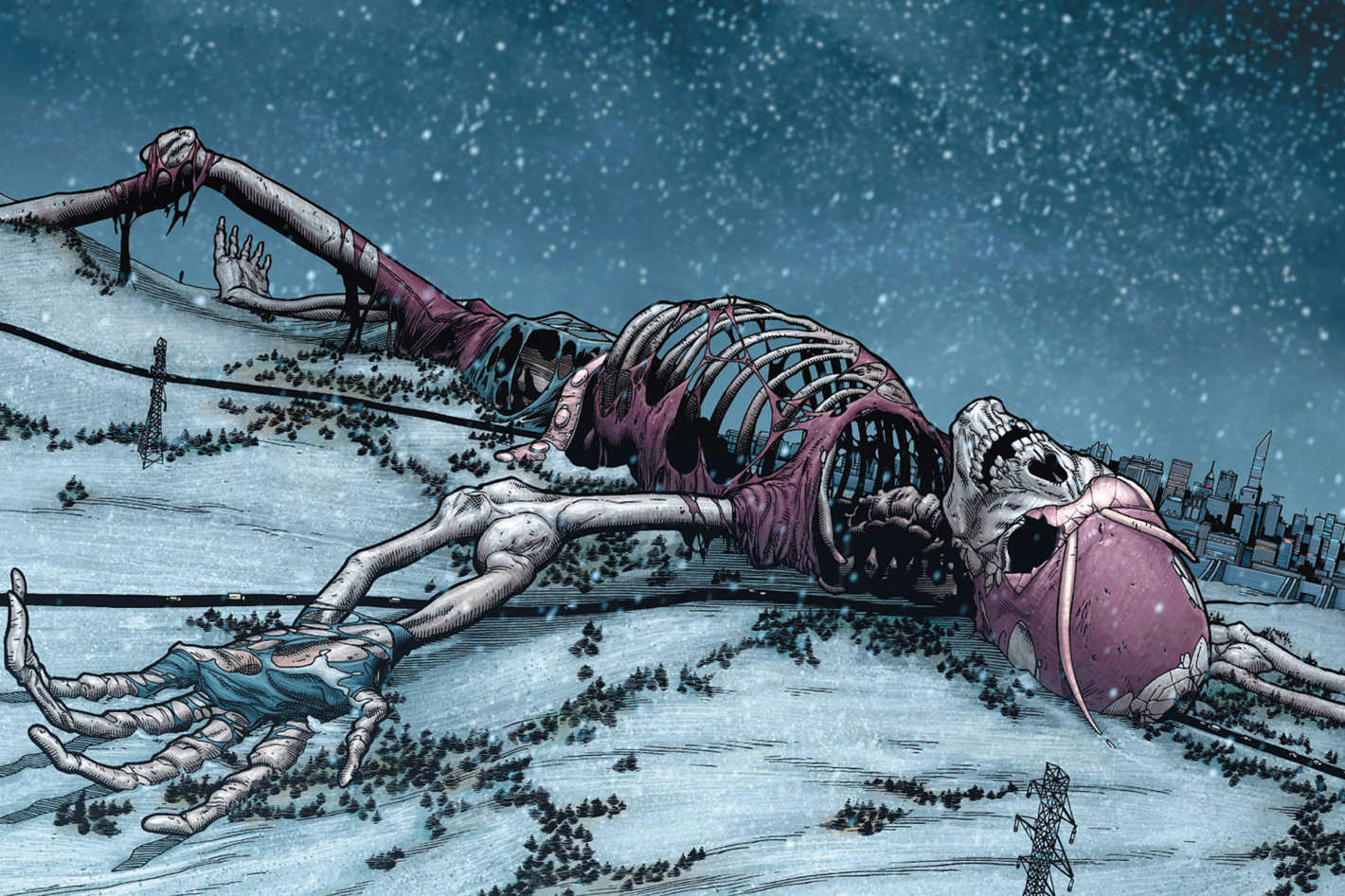 Watching the two travel across the US is breathtaking. Seeing famous landmarks twisted by the supervillains adds depth to the world and allows us to imagine all kind of things that could have happened during the war. We see the giant body of Loki, trapped under the Baxter building, a Mount Rushmore with Red Skulls face on it and the Venom symbiote occupying the mountains of South Dakota. It really adds an authenticity to the work and anyone familiar with the locations will lap this up.

“I swear to God I had no idea”

When we finally get Logan’s backstory it’s clear why the hero is now firmly a pacifist. After being brainwashed by Mysterio, he murdered the mutants, butchering them one by one in nightmarish fashion. In a far superior moment to the film, we see the hero lost, ashamed of the unbearable torment that he has been put through, ready to end it all. Attempting to commit Suicide he realises that there is no escape from what he has done and he must now live the rest of his life in torture, the only promise he can make is that he won’t kill again.

I really connected with the character in this moment, we all have things in our past that we wish had never happened. Sure I’ve never accidentally murdered all of my friends but I’ve been two-faced, stabbed people in the back and generally done things I am no longer proud of. Therefore, it’s refreshing to see a character temporarily walk away from the bloodlust, even if he is doomed to become a monster once more. 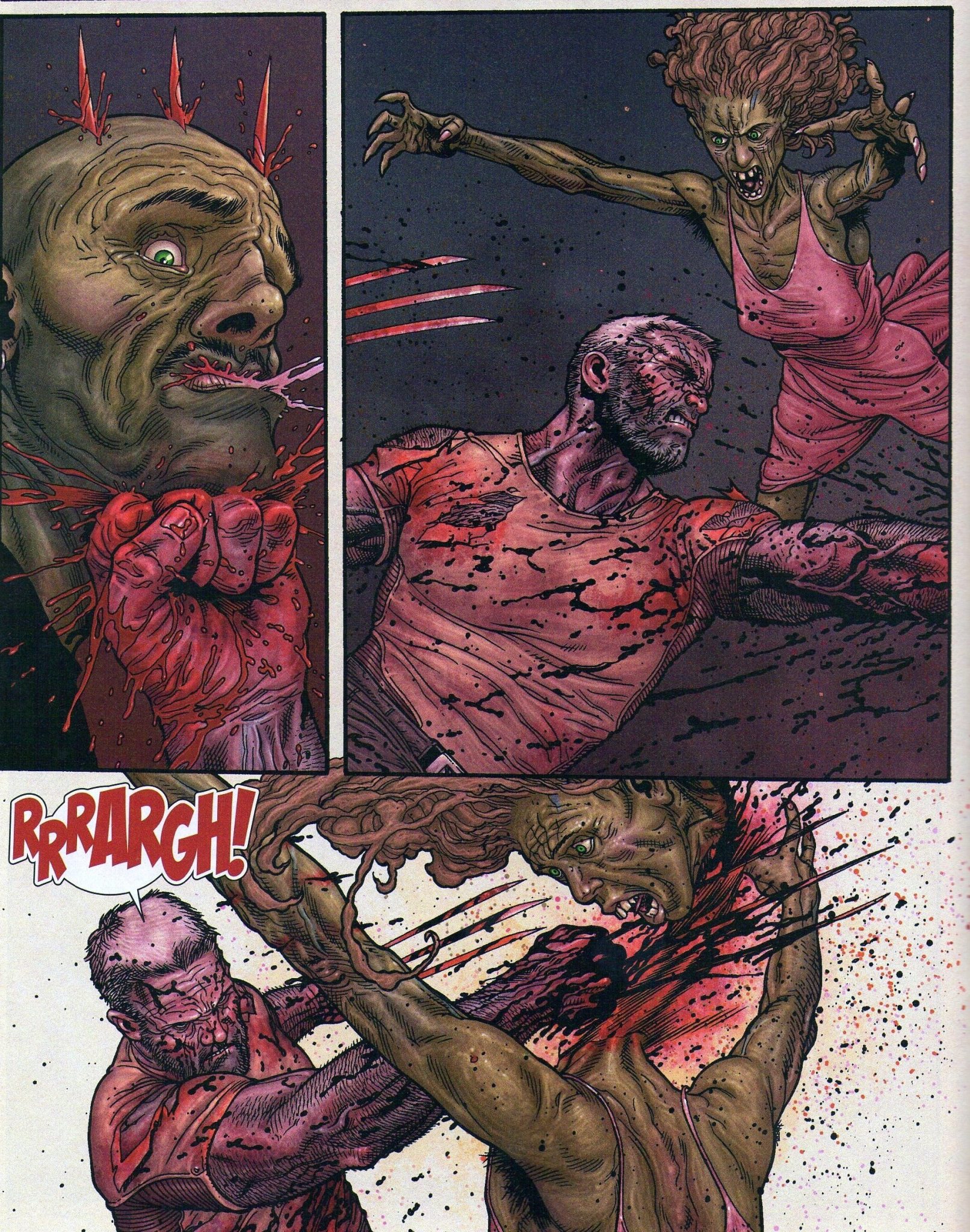 Arriving at New Babylon, the duo stumble into a trap, this has all been a ruse and when the dealers betray Hawkeye, murdering him in the process, the Wolverine awakens within Logan once more.

In what is one of the goriest final chapters ever put to page we see the beast reborn. As Wolverine rips through Red Skull and The Hulks, the story really hits a high note. Decapitation lines every page and each panel feels like it’s ripped from the darkest moment of your most twisted nightmare.

Mark Millar provides pure fan service and I don’t think there’s a reader out there that won’t be grinning with delight watching Wolverine tear through everything put in front of him.

In a beautiful send off we see Old Man Logan ride off into the sunset, leaving the life of solitude behind, ready to change the world once more. 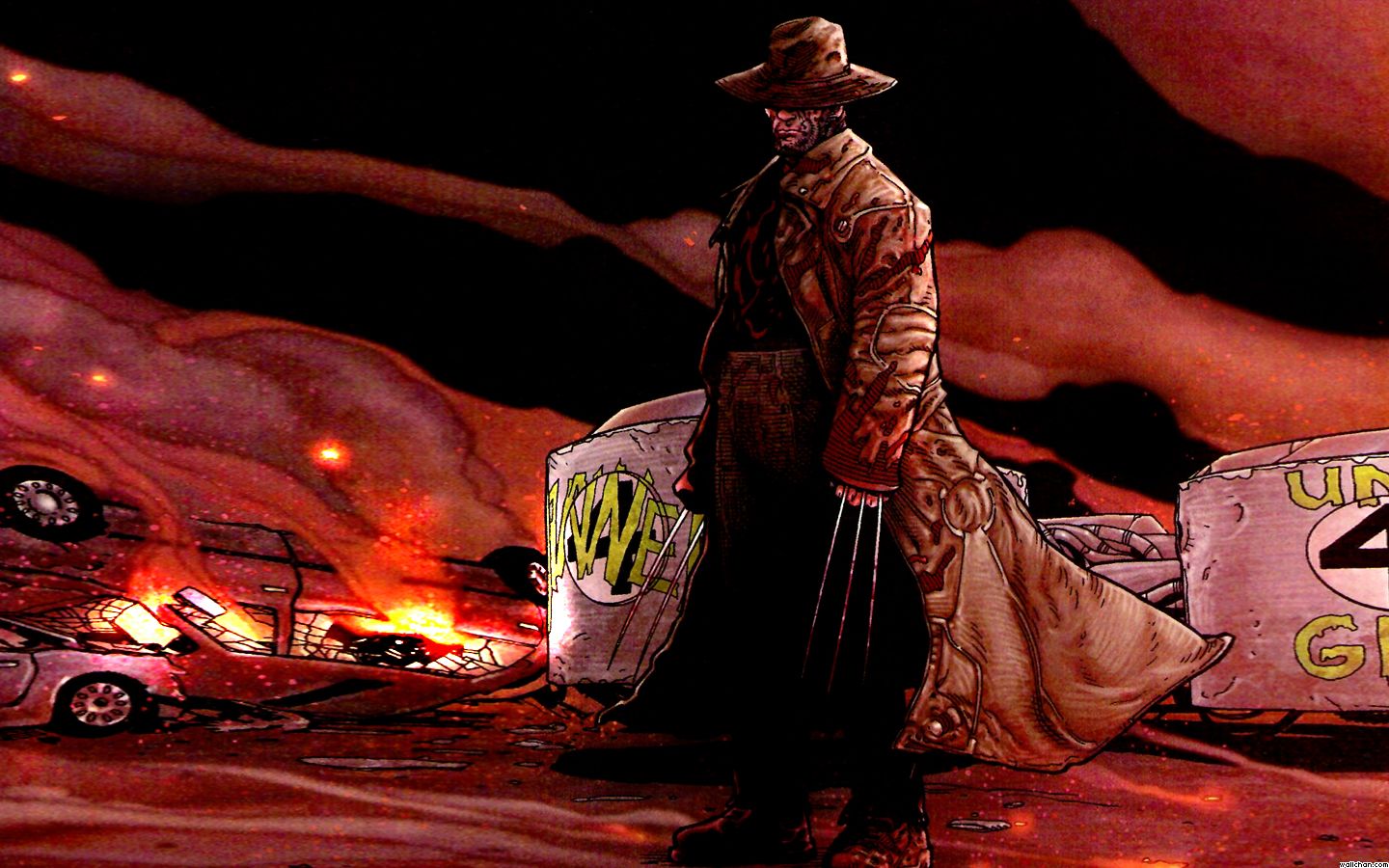 Wolverine: Old Man Logan is not only superior to the film based upon it, it’s also superior to 90% of the graphic novels that exist today. Demanding your attention from the offset and throughout, Mark Millar not only manages to deliver on the action that many fans of Wolverine crave, he also manages to capture the more reflective reader’s attention due the inner turmoil and drama that the protagonist faces.

Both facets of the character are fascinating and when you couple this with a refreshing take on the Marvel universe and its characters, you have a match made in heaven.

I’m angry at myself for putting off Old Man Logan for so long but happy that I finally took the chance on a book that will now be a mainstay on my reading list.

Whatever your opinion on the X-Men or comics in general, you owe it to yourself to read this storyline. It’s one of the greatest ever.