Skip to content
Why This Scene In SPIDER-MAN Into The Spider-ve...

Ok so into the Spider-verse had the very difficult task of introducing a new Spider-Man to the mainstream. For decades and decades and decades, Peter Parker has been the person that we associate with the role and thus bringing in Miles Morales to lead his own movie was a big risk on Sony’s behalf.

Add to this the movie was also going to be animated and there was a big chance that this wouldn’t catch the interest of general audiences and that Miles would be dead on arrival.

After it’s release the film received several presitigous awards including best animated feature at the Oscars, BAFTAs and Golden Globes.

It features it’s own innovative animation style and it has a whole host of characters that pull from Spider-man’s rich history.

I’d say that the film is universally liked and in it there’s one key scene that I think is absolutely perfect.

That is what’s up danger.

Living Up To Expectations

Now throughout the film Miles very much deals with the fact that he feels inadequate compared to the rest of the Spider-men…and women…that appear in the film. This is shown through the first costume he buys not fitting and in a symbolic moment when he enters the Spider-cave.

Upon coming across the suits he stares at one and his face doesn’t quite line up with the mask.

This same suit was worn by the Peter Parker that Miles met earlier in the movie and it somewhat shows that he doesn’t believe that he can live up to the responsibility that Spider-Man has. Throughout the film he’s constantly falling short of where he needs to be and this even leads to the death of his uncle.

Aaron is very much the Uncle Ben figure in his life and this is hinted at in the film with the scene somewhat mirroring the way that Ben died in the original Spider-Man movie.

Both figures die holding their opposites hands and Aaron bestows in Miles the idea that he’s best of them and that he can keep going.

This somewhat juxtaposes what Aaron has represented in the film and he was actually somewhat of a bad influence on him throughout it.

Early on we see that Miles gets into Visions academy but it’s clear that he doesn’t want to be there.

He dad has to almost give him a police escort to the door and he purposely flunks tests in order to avoid living up to what’s expected of him.

Miles will do whatever he can to get away from this lifestyle and he’s given a paper based on the book Great Expectations that somewhat is synonymous with his journey.

Rather than doing it though he goes to his uncle Aaron’s and the pair travel into the subway which is where he’s bitten by a spider that gives him incredible abilities.

Miles constantly running away from his responsibilities and refusing to live up to his full potential is eventually what leads to his uncle getting killed and it’s a major turning point for the character.

Completely devastated Miles returns home and he’s told to sit the next one out by the other Spider-people.

Though they wanted him to be by their side, they didn’t think that he was up to the challenge and though they initially trusted him, overtime they slowly lost faith.

His father also returns to his dorm and tries to have a heart to heart with him but due to him being webbed up, he’s unable to have a conversation.

However what he does do is tell him that whatever he chooses to do, he’ll be great at. 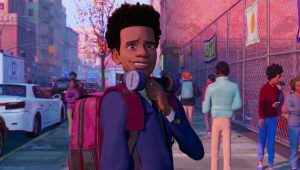 Finally harnessing his power Miles manages to break free from the trappings he finds himself in and this is symbolic on a number of levels. Not only has he finally come to grips with his abilities but he’s also escaped the perception that the other Spider’s had of him. They believed he had to stay behind and even held him in place so that he was stuck there. Him breaking free of this shows that he’s going beyond what they wanted for him and he’s now his own man.

From here we cut into the phenomenal ‘What’s up Danger’ scene that is laced with lots of important imagery that shows how far he has grown as a character.

Miles once more looks at the Spider-Man suit but rather than his face being off in the reflection it’s now level with the mask showing that he has stepped into the role.

Aunt May also presents him with two web shooters that she says they fit perfectly. Both these moments mirror the ones from earlier in the film in which his face didn’t line up and the costume didn’t fit him.

Miles then climbs to the top of the highest building he can find and though he’s unsure whether he will actually be able to make the swing or not he takes a literal leap of faith into the beyond.

The glass rips off the building and the air rushes past him whilst the camera does something inspired to show his ascension.

The angle is flipped vertically so rather than falling, Miles looks like he’s now rising up into the sky.

Metaphorically this shows that he’s travelling upwards, flying beyond what he ever thought he could do and I still get goosebumps as the song fully kicks in. As he swings through the city we take focus on the brand new red spider-symbol over the black suit.

Going from running along the street, miles then starts to sprint onto buses before he journeys up to dashing along the windows of skyscrapers.

This then culminates with him journeying up to the rooftops showing a gradual progression from the bottom to the top.

The scene ends with Miles unmasking and this shot was used throughout the trailers when promoting the movie.

Though we’re well aware Miles was under it now, at the time upon it’s first release this came as a big surprise.

For years and years we’d only ever seen Peter on the big screen and thus Miles unmasking showed a change in direction. It also highlights one of the core messages of the film which is that anyone can be a hero. Throughout the movie this is taken to be used purely for Spider-Man but what Miles represents is that we all have the ability to be heroic within ourselves.

We are very much the own heroes of our stories and Miles is supposed to inspire us to believe that anyone can be under the mask and that if he can be, then we can too.

As he leaps across the sky he comes across the Trust Us Bank, which though a bit on the nose shows that he has now fully began to trust himself and the other Spider-peeps. They wanted him to live up to his full potential but he didn’t believe that was possible and that they were out of his league.

Mile’s leap of faith is very much symbolic of him moving forward towards something, rather than away.

Throughout the movie he’s tried to drop things that would cause him to take on responsibility at any point. The character has never really stood his ground and moved towards the danger and because of this he faced several losses.

This included him messing up at his school, failing his first swing, running away from the fight that led to his uncle’s death and so on and so forth.

However he’s now running towards the danger, facing it head on and accepting all the responsibility that now rests on his shoulders.

Miles goes from a kid who lacks the confidence to fully embrace all that he can be but he takes on board all the lessons that people tried to impart on him and finally jumps into void and becomes this earth’s Spider-Man.

It’s an awesome coming of age scene that works on it’s own even viewed out of context. This very much feels like a music video that’s a comic book come to life. The panels that appear add to this and the daunting buildings litter the skyline showing the concrete jungle that he’s about to make his playground.

This is one of the best scenes in a comic book movie ever and due to it’s subtext, meaning and the build up to it I think it’s absolutely perfect.

This is a scene I go back to time and time again and it perfectly sums up the message of the movie whilst also introducing Miles to general audiences.

This is a character that remained in the comics for a long time but with the recent video games and Spider-verse movies it’s great to see him finally getting the appreciation he deserves and i think that this scene is where it all stems from.

The scene is perfect and I hope you enjoyed us discussing why we love it so much.