Skip to content
WANDAVISION, LOKI & FALCON AND THE WINTER ...

Disney dropped a big one and we finally got our first look at the upcoming series Wandavision, Loki and Falcon and The Winter Soldier.

Throughout this, we’re gonna be breaking down the teasers and giving our thoughts on what could be happening in the shows.

If we’re right there will be heavy spoilers so if you don’t want anything ruined about the show then I highly suggest that you turn off now.

With that out the way I just wanna give a huge thank you for clicking this, now let’s get into the breakdown.

The trailer opens with Sam Wilson in what looks to be a farm practicing with Captain America’s shield. The character seems to be a natural with it and he’s spinning it round without missing a beat.

It doesn’t seem like he’s quite got it pulled together fully yet though as instead of ricochetting it off a tree it gets wedged into it and this is where we get one of the big images from the trailer that shows it stuck there.

Now we don’t know whose house this is as it’s neither Hawkeyes or nor Tony Starks which are two of the big farmland locations in the MCU. So it is likely that they have a new ally and are laying low whilst Sam can build his skills.

Personally, I think that this is the residence that Old Steve Rogers used after Peggy Carter’s death and the character didn’t want to bump into his younger self and affect the timeline so it’s clear he’s been well out of the way.

He could be helping to train the two and that would be the theory that I’m going with. 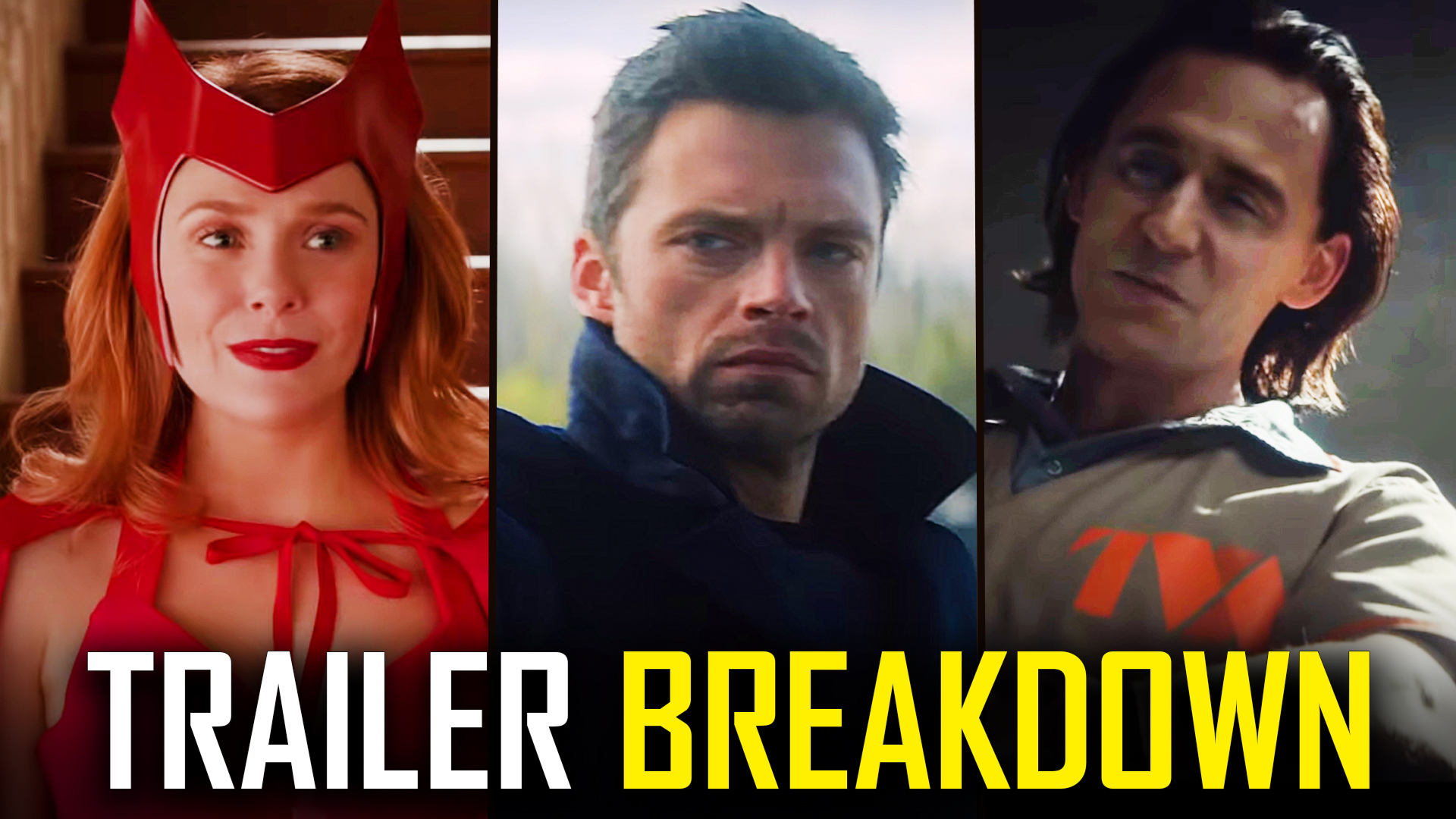 From here we cut to Falcon soaring through the air and fighting Paratroopers. Now we don’t really know who these are, however, it is clear that Sam has kept the Falcon identity rather than becoming Captain America. At the end of Avengers Endgame, Cap and Co were still wanted for breaking the Sokovia accords so I believe that they will still be getting tracked down by the U.S. Government who want to capture them.

There’s a big signifier later in the trailer that the government has put their own Captain America in place and it is likely that Sam and Bucky are still being hunted.

These guys could be Hydra Agents or U.S. spies. we don’t know yet, however, I am going with the former. The shooters are using the traditional SHIELD skydive suits but the green and yellow colors are synonymous with Hydra agents. Those who’ve been watching Agents Of Shield will know that the shadowy organisation still exists and they pop up from time to time across all the seasons.

The U.S. also wants to set up their own Captain America which I’ll get into a bit so it could be the government and at the moment a lot of it is up in the air.

They do seem purposely well equipped to deal with Sam though due to the suits so it is likely that they went after him.

From here we cut to Bucky holding Zemo at gunpoint. Bucky obviously has a big vendetta against the character as he was framed by him during the events of Civil War. Not only did this set up a worldwide manhunt for Bucky but it also allowed for the Sokovia accords to be set up which meant that Cap and Falcon had to spend a lot of years in hiding.

At the end of the film, Zemo was captured by Black Panther and sent to the Raft but since then it looks like he’s managed to escape, this may be because the snap allowed him to or due to society’s infrastructure being on the brink of collapse, the authorities could have let criminals out early.

Ok maybe not this guy but we would have needed ice cream sellers or something. We do know that Bruhl will be wearing the signature purple mask of the character but this avoids it. Bucky seems to be unwilling to kill him as he unloads his gun when it’s pointed at the character. Who knows, he may even become their ally as there’s no reason for Bucky to do this other than to show he’s a better man, but it is a very intriguing aspect of the spot.

Towards the end of the Trailer we see U.S. Agent being paraded about at a Superbowl himself. I’ve seen a lot of people say that this is Sam finally taking up the Captain America Mantle, however, we know from behind the scenes images that this is actually Wyatt Russell in the role.

In case you don’t know in the wake of Captain America’s death, the Government made their own appointed Captain America in order to keep the world at ease and this character seems to be fitting the mold of this.

He even has Sam’s Shield so it is likely that the government did capture the character, take this from him and pass it onto their new man.

Perhaps this is why Bucky needs Zemo as if the guy escaped from The Raft then he will likely be able to break Sam out of Prison. These are all just theories at the moment but yeah, that’s what I would guess.

The trailer actually ends with Falcon and Winter Soldier shaking hands and it looks like they’re formed a strong unit. The two don’t have a young Steve with them, at least that we know about so they will have to form a strong unit together.

It’s the first proper team of two in the MCU and though both were pretty much sidekicks at one point I’m glad we’re getting this strong double team of them both.

WandaVision Will Be In Black And White

From here we jump across from the Falcon and Winter Soldier to Wandavision. We see that in this reality, Vision is still alive and at least this element of the show will be black and white.

The series is going to be setting up several events that happen in Doctor Stranger In The Multiverse Of Madness and according to leaks, Wanda, stricken with grief sets up her own pocket universe in which she can live out her perfect life.

This is how she is able to resurrect Vision as she likely pulled him from another timeline. Similar to

According to Paul Bettany, the show is bonkers and it looks like it’s pretty much going to be similar to a 1950s sitcom at some point before changing stylistically throughout the seasons entire run. We see snapshots of this and it looks like the show will be jumping about through several time periods after starting at this point. There’s gonna be the 70s, 80s and more and basically every time period that your parents say are better than the one we live in now.

Vision is also in his signature grey and though this is due to the black and white, it’s nice that they brought this across after the character’s death in Infinity War.

In addition to this we also get a comic book accurate version of Wanda that suggest she is going to go into the comic book lore as well as the sitcom one.

Kevin Feige did state that this would be the show in which we see Wanda become Scarlett Witch and it looks like this will be the place to do it.

We also see Wanda and Vision get married and it’s in their living room, which I guess saves money on the day. Now this makes me think that the pocket dimension will literally only exist in their home. They won’t be able to leave the property due to its size and this is why the wedding has to be carried out here.

It looks like they got it on as well as we do get a tease of their two twins in the trailer as we see two dummies being spat out. Due to the time jumps that we see they likely won’t be babies for very long and we will probably see them as teenagers during the shows run. This will help to tie into the Young Avengers I think which is rumored to be in development and this show will probably have a lot going for it that pays off in the films when it releases.

Next up is our first glimpse at Loki and though it’s pretty minor, there’s actually a lot to take from it. So as we know in Avengers Endgame, Loki was able to escape his eventual fate after taking the Tesseract and because of this, he’s created a branching timeline that will have big repercussions. This is still the 2012 version of Loki who was a big villain so this is why he promises to burn whatever it is to the ground.

On his jumpsuit we can see the letters TVA and fans of Marvel Comics will know that this is the Time Variance Authority that are basically policemen that have been tasked with protecting the multiverse from people like Loki who are traveling through it and wreaking havoc. The TVA have the ability to time travel and we also have rumors that Loki himself will be doing this in the show and going to his big losses and changing them to wins.

This could create multiple, expansive and massively warped timelines in which the character actually rules the universe and I’d love to see this motif pop up throughout the series.

Imagine Loki going back to 2012, winning the battle of New York and then handing the tesseract over to Thanos, it would be brilliant to see and I’m massively hyped for this show.

Ok so that’s all of the first looks and I have to say I was not expecting this but I’m so glad we got it. The Sam and Bucky plot thread that was left at the end of Avengers Endgame is probably the one that I’m most interested in, followed closely by the Guardians plot and I can’t wait to see how the world adapts to not having an Iron-Man or Captain America.

The MCU at the moment is in a real state of like…I dunno…everything is up in the air, there’s no stability, all the big names bar Spider-Man is kinda out the window and though a lot of people are kinda uninterested because of this, personally I’m actually more invested now because it could literally go any way.

I think this trailer does an awesome job of setting everything up and I really can’t wait to see what happens when the shows are finally released.

I’m gonna be doing more breakdowns on the shows in the run-up to it so definitely subscribe to the channel if you want to be kept up to date with everything.

Now obviously I’d love to hear your thoughts on the trailer and if it’s got you excited for the three seasons. Comment below and let me know.