Someone told this guy to be there or be square and he took it literally, haha goteeeem.

The Second Season of the Umbrella Academy ends with a big cliffhanger and throughout this post, we’re gonna be breaking down everything we know so far about the mysterious Sparrow academy.

We’ll also be going over Lila and how she may actually tie into the group themselves so make sure you stick around until the end as we’ve got a big theory on her inclusion.

Obviously, there’s gonna be Heavy Spoilers so if you haven’t had a chance to watch the season yet then…what the hell are you doing? Go and check it out now.

Lila Pitts is one of the big newcomers in Season Two that ends up becoming attached to the Umbrella Academy in several ways. Like the members of the group, she was born on October 1st 1989 with her mother showing little to no signs of pregnancy. Unlike the family though, Lila was not adopted by Sir Reginald Hargreeves, instead, she was raised by her parents in London.

After realising that super-powered beings may one day lead to the downfall of all life itself, The Handler decided that she needed to build her own army of soldiers and thus she started to put a plan into action.

Because there were 43 children all born with special abilities this massive number could vastly overwhelm any army on earth and the character concluded that she would need to match them on a level playing field. So she started to study the individuals that would add the most to her army and this is when she came across the one size fits all solution to her problem…Lila. 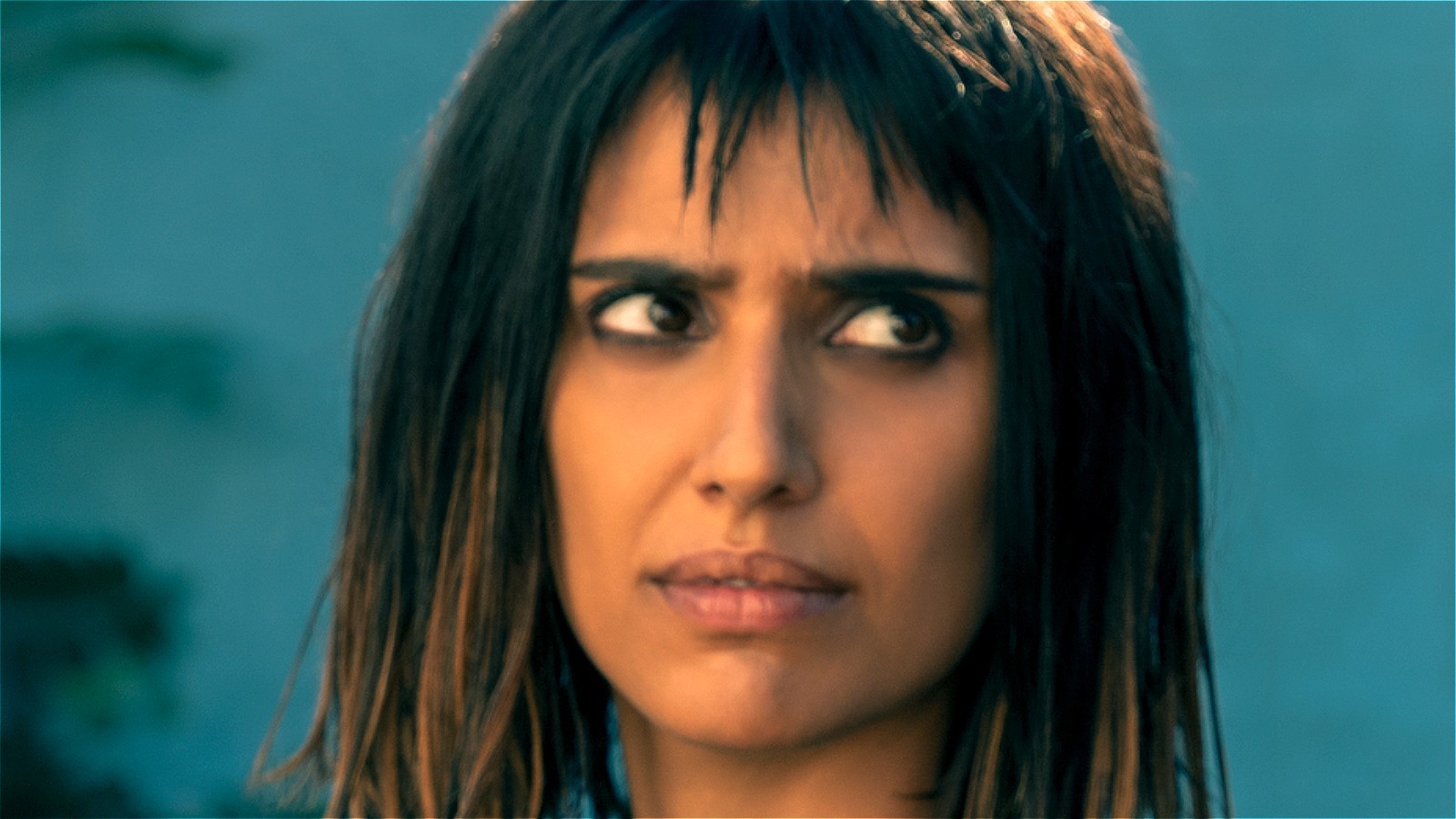 Lila can mimic those with superpowers and she is very much about taking one’s strength and turning it into a weakness. Due to years of practice, Lila can completely master someone’s abilities within an instant, though her powers are limited to one person at a time.

We see this demonstrated to great success in the finale when she tells Allison to stop breathing and yeah…you went too far.

We discover that The Handler was responsible for Lila’s parents’ deaths in 1993 and that she hired Number 5 to kill them.

In case you don’t know the Temps Commission travel through time assassinating people that may eventually become problematic and The Handler made the job seem of the utmost importance to Five, hiding the truth about her true intentions.

After Five had disposed of the pair, The Handler took the child and started to train her.

Lila is already an expert in hand-to-hand combat and adds to this her mimic abilities she’s not one to be messed with. Because she’s so good at adapting and fitting any situation, The Handler sent her to stalk Diego Hargreeves and when he was committed to an insane asylum for trying to stop the assassination of JFK she soon became a member of the institution.

Lila led to the character’s escape and this made Diego trust her.

As the Handler’s mole, she kept tabs on their operations in the past and even kidnapped Diego at one point in the hopes of getting him to sign up to the Temps. He simply used it as an opportunity to learn about what caused the apocalypse in the 60s and after she felt betrayed by this, The Handler twisted the knife even further, pinning the deaths of her parents on Five.

Lila joined her surrogate mother in the finale to take down the academy and it’s at this point that she learned the truth. Upon asking The Handler if what Five told her was true, The last of the Swedes arrived and shot her which is when she grabbed the Temps briefcase and fled.

That’s the last we saw of her but she may have ended up in The Sparrow academy which we will get into in just a bit.

Now the name for these actually comes from the comics themselves. Volume 3 titled Hotel Oblivian centres around the rise of superpowered lunatics in the world and during the final battle, all the villains that the heroes have ever locked up are freed from their captivity.

This ties into the title Hotel Oblivian which is an interdimensional prison that houses the bad guys. The heroes are overwhelmed but a group known as the Sparrows show up to save them.

On top of this Gerad Way has officially announced that the fourth volume in the run will be known as The Sparrow Academy.

In an interview with Forbes, Way stated.

“[It] deals with a very big reveal in the Umbrella Academy universe, something that had been secret for a long time. Our siblings learn a lot about what was happening behind the scenes, as well as discovering the true nature of some characters that have been with them since the beginning. The series finally starts to answer the question: ‘What about the other babies born on that day, at that moment? The Umbrella Academy siblings are not alone in the world anymore.”

Now as for the show, I do believe that the Sparrow Academy is connected with Harlan in some way. At the end of the series, we see that the character is levitating a Sparrow and in this timeline, it is possible that he became the first super-powered being on the planet and thus set an example for what was to come.

It could be that the Sparrow academy is named after him but we won’t know until we see the next season for ourselves. Sparrows themselves are laced throughout the series at several key points and popbuzz.com recently put together a full list of every location of the little bird which does hint at their importance in the world.

Now how they were formed we don’t know for definite but personally, I believe that after meeting the original Hargreeves in the Sixties, Sir Reginald decided that they were complete screw-ups and thus adopted seven other individuals instead.

As he never met Ben due to the character being a ghost, he didn’t have the foresight to avoid choosing him and thus scooped him up, though it seems like this may have been a bad choice. 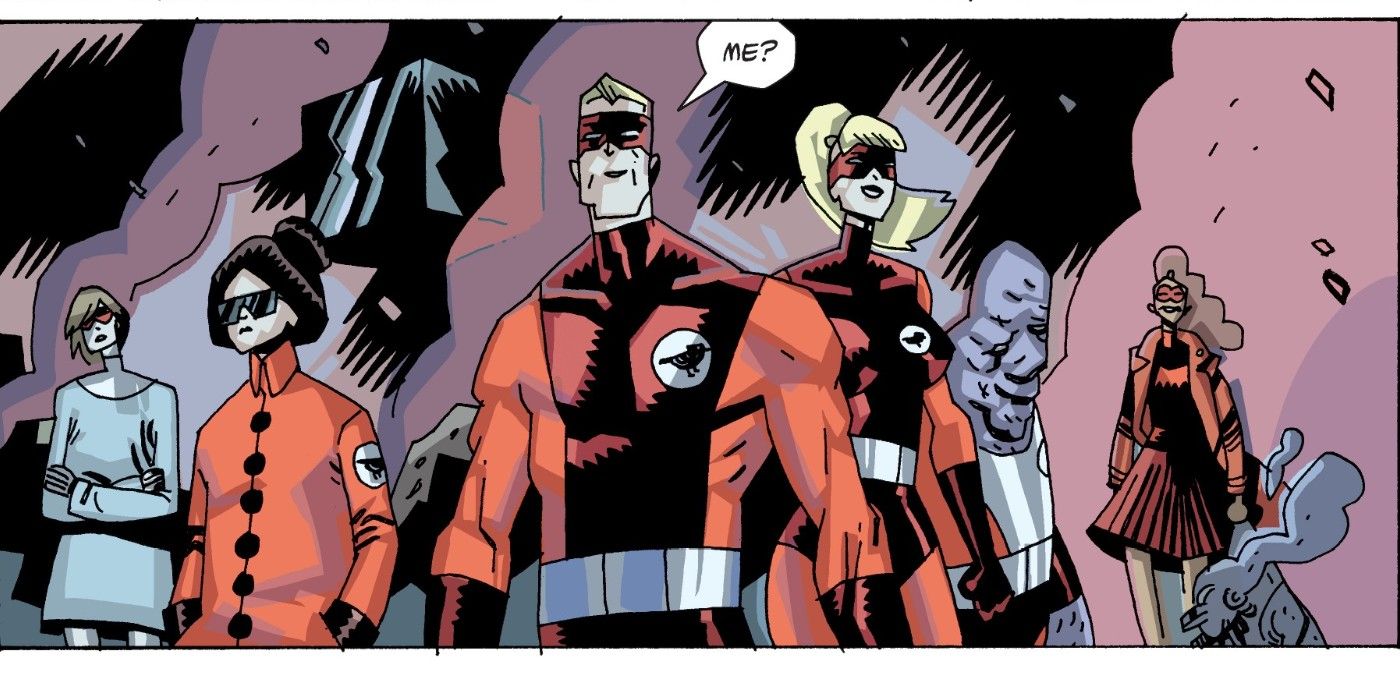 Now as for the members of the Academy, the big elephant in the room is of course well Ben.

In the original timeline the character died whilst out on the job, however here is alive and kicking looking like a My Chemical Romance fan that just discovered their top tens songs video by WatchMojo.

Ben is probably the most that we know about the group power-wise as we can take a lot of his abilities from the original timeline and bring them across.

When the character was a part of the original lineup he was called number six.

In case you don’t know when Hargreeves formed the group he assigned them a number from 1 to 7. This was originally thought to be their power level with 1 being the top. However, over the years, it became clear that this was actually the ranking of their obedience to him and if anything, the more powerful were down the bottom.

With Vanya, who was 7, not being in this timeline, Ben becomes the most powerful and it’s pretty clear that this has gone to his head.

Ben actually possesses the ability to summon eldritch monsters from another dimension, the portal to which happens to be under his skin. Thus when he attacks it looks like tentacles are emerging from his stomach.

Growing up due to Ben’s naivety he was easily manipulated and Hargreeves often put him on the front line which clearly led to his death.

This Ben that we see likely possesses the same powers though by the looks of it he is in control and not Hargreeves. It is possible that in the original timeline, due to the family being very submissive to their father that he just got in line too and didn’t fight back.

Perhaps the Sparrows gave as good as they got and this empowered him to take the lead and even hang a lovely picture of himself up in the main hall.

Either way, he is clearly the leader but who exactly is he in charge of?

Well in the comic books The Sparrows are introduced to Vanya as their real family.

They wear all red and Vanya is from Russia so there may be some connections there, especially since the show seems to centre around the tensions between America and the country.

The first person that we know for definite is Carla and she is pretty much the Allison of the group.

Carla can alter reality through her voice. Instead of saying I heard a rumour the character says “I said so” and this bends everything to her will.

In case you don’t know, in the comics, Vanya is paralysed by Carla and actually manages to fix their legs just by willing it so.

Carla takes Vanya to Norway which is where Vanya is introduced to the Sparrows and we get a tease of who they are.

Next up is Number One who seems like the Luthor of the group, however, unlike the one we’ve come to know and be…a bit so-so on I guess, he hasn’t been experimented on and is more of a normal person.

He also hides his face behind a mask so he may have an alter ego that he uses to lead a somewhat normal life.

Next up is this weird-looking blob-like character.

Now though they seem pretty messed up this is actually because they are a human voodoo doll that can inflict injury on others by hurting themselves.

They’ve clearly had to completely destroy their body to do this and yeah it’s really weird.

I actually think that Lila might be a stand-in for this character and though their powers aren’t the same I do think that when it comes down to it she may actually be revealed as a member of the group. Lila of course has knowledge of the family and may have helped Sir Reginald to pick the right children for his mission.

The big plot hole in Reggie not choosing the original children is that he wouldn’t know how to avoid some of them and thus I think Lila may have given him a helping hand due to her knowledge of the future.

Now, this is a theory and she isn’t in the comics so I’m not 100% on that but I think it would be interesting to see.

There’s also a member that can vomit up a black bile-like substance that melts armour and severely damages people that come into contact with it.

Then there’s the member that can turn into what is either a murder of crows or, more fittingly, a flock of sparrows.

There’s also a blonde girl who appears beside them though we don’t know exactly what’s going on with her.

Lastly is the levitating green cube which we know even less about than all the rest.

Several theories are floating about, excuse the pun, and some believe that in the absence of Grace that it may have taken up the position of their mother, leading them to be somewhat anti-heroes. However, I actually think that this may be the equivalent to Five.

We know that other dimensions and realities are laced throughout the series and it is possible that just in the way Five could jump through time, the cube can jump through dimensions.

This would counter Five’s abilities and make for the perfect opposite to him which the majority of the Sparrow academy actually seems to be on the whole.

I’m sure we will find out soon enough but that makes the most sense to me.