Welcome to the Heavy Spoilers show I’m your host Paul and here we are with ANOTHER Thor Love And Thunder Trailer Video.

In our first one, we covered a lot of the easter eggs and characters that would be appearing in the movie such as Jane Foster and also Gorr The Butcher. Huge thank you for getting that trending at Number 2 and everyone who supports the channel is now my official Friend From Work.

For this one, I’m making a video going over some of the theories surrounding it as well as what we think could be happening in the movie. I’m recording this Tuesday morning when the trailer has roughly been only about 18 hours so if there’s something we don’t cover then make sure you leave it in the comments below as I’d love to read it.

If you choose to run towards the spoilers and not away from them then this is the channel for you so make sure you like it and subscribe for videos like this almost every day. With that out the way, thanks for clicking this, now let’s get into Gorr Love And Thunder.

Now strangely the big bad of the film is completely missing from the first teaser and poster. Christian Pale has done his Batman disappearing trick and after the toys of him leaked he completely vanished from everything else surrounding the movie.

In case you don’t know Gorr was devoted to the Gods but after his entire family died he realised that they didn’t actually care about the people that worshipped them. He then went on a killing spree throughout the cosmos, brutally murdering every one of them that he could.

We actually see a lot of giants in the trailer that has been slain and I think that this is teasing the aftermath of his killing spree along with the God that we’ll see die in the movie. During the training montage, we see a giant skeletal figure slumped in chains. There are several in mythology that this could be such as Prometheus and Atlas.

Prometheus was chained up and every day birds would come in and eat his intestines until he died and then when the day started over he’d regenerate his organs and the whole thing would start again. Atlas was a titan who was forced to hold the world upon his shoulders and both of these were punishments put in place by Zeus who we know will be played by Russel Crowe.

MT from New Rockstars also said that it could be a Watcher but whatever it is it’s clearly been dropped in to add to this aesthetic of giant corpses in the trailer.

Later on, just before Thor kisses the woman on the boat we can see the body of a giant Kracken behind him and there’s also Phalagar The Behemoth who shows up from the comics. In the source material, this was Thor’s friend who was a victim of Gorr and I think that he’ll be going to Zeus to try and warn him about what’s coming. 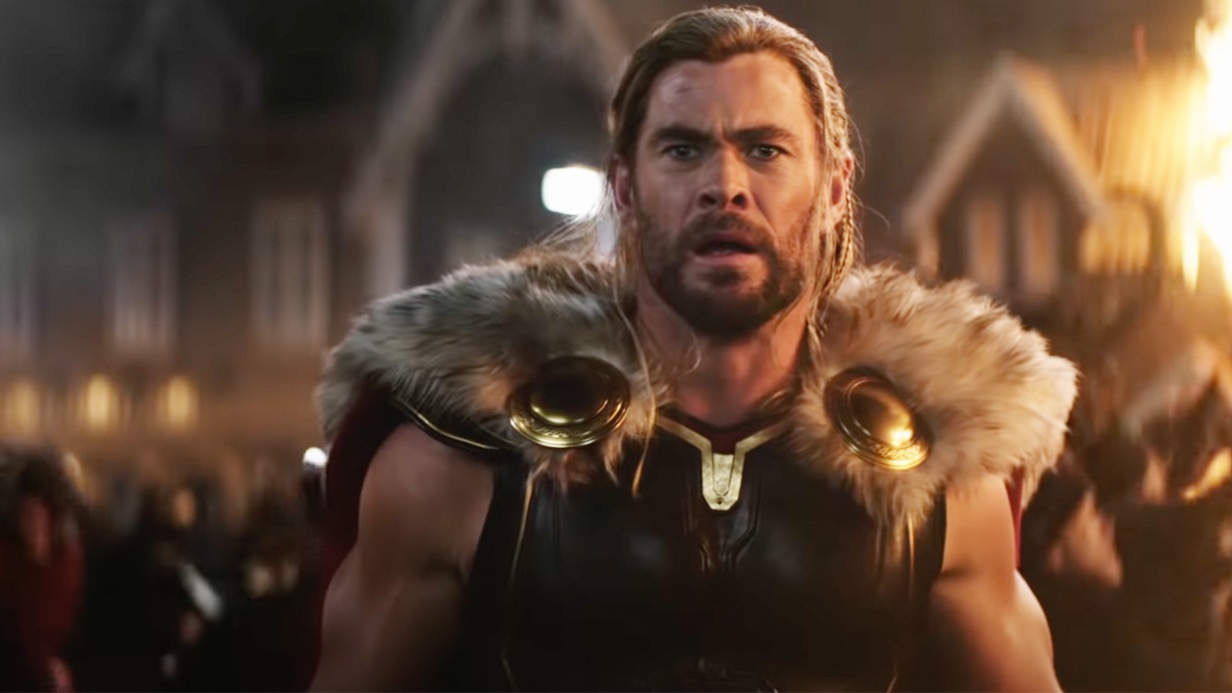 Right after we dropped our Trailer breakdown the official synopsis came out and in it we learn what the plot of the movie is. It states that Thor’s journey for inner peace is interrupted by Gorrs Rampage and after he recruits, King Valkyrie, Korg and Jane Foster they head out to stop him before it’s too late.

In the trailer, we can catch them walking towards a statue of Zeus so I actually think that the shot of Jane at the end of the trailer happens pretty early on in the movie.

I’d love to see Gorr show up to Olympus and I think it would be such a massive moment if we were introduced to him through killing the king of the Gods. Watching the characters follow him on his killing spree only to come face to face with him doing this would be such a cool way to show us the character for the first time and I can just imagine Christian Bale making a big entrance with him.

Now Thor is gonna need some help to take him down and there’s actually a shot in the trailer that looks like it might be missing a character. In it we see Thor and Korg standing side by side and it seems like there’s an empty space beside them that someone should be filling up. We’ve of course seen them hiding characters for trailers such as No Way Home and one of the VFX artists that worked on the film recently spoke to corridor crew about the whole process. He said that you just hide the layer in the render and then send it off to be cut into a trailer and I think the majority of the internet is well aware that this is something Marvel does a lot.

Now if this is indeed the case it opens up lots of possibilities over who this could be. I’ve seen Deadpool mentioned, Loki and Medic on Twitter said it’s probably either a Drax or John Cena cameo.

Personally, though I think that it could be Beta Ray Bill who we’re yet to meet in the MCU. However, his head could be seen in Thor Ragnarok on the Grandmaster’s tower and he’s definitely the kinda character you’d call on to take on Gorr.

In case you don’t know his home was destroyed by Surtur who also appeared in Ragnarok and his people the Korbinites…no….not them, they chose him to be their champion. Lacing him with cybernetic parts he became the most powerful of the race and he also has used Stormbreaker which would fit perfectly with this movie as we know that Mljonir is coming back.

Now the fact that Jane Foster is going to be a version of Thor in the movie also makes me think that they might bring Bill in as well. When we look at what the MCU is doing with Phase 4 they actually seem to be bringing in alternate versions of established characters and this can be seen across a number of films and shows.

We of course had Loki which had Loki, Lady Loki, Kid Loki, Old Loki, Gator Loki, Boastful Loki, Vote Loki and so on and so on.

No Way Home had the three Spider-men, Doctor Strange In The Multiverse Of Madness is gonna have multiple versions of him and now we have Thor Love and Thunder.

With Jane becoming a version of Thor as well it makes me think they might bring in other versions of the character and this would be the perfect way to debut Beta Ray Bill.

In the trailer, Thor is also wearing his Thunderstrike outfit and he actually ended up donning this after another Thor called Eric Masterson emerged.

Just feels like Phase 4 in general is bringing in variations on what we already know and I’d love to see that carried across into this movie too.

How she got the hammer back together we don’t know but I think that after Hela smashed it that the pieces would’ve remained behind. This material used to craft it of course was enchanted by Odin who made it so that you had to be worthy in order to lift it.

Therefore I think that the pieces would’ve just stayed on the ground where Hela smashed it because nothing would be able to lift them. The site of this was actually at Tonsberg which has appeared at several points in the MCU. It was where the frost giants invaded at the beginning of Thor and it then showed up at the start of Captain America the first avenger. This was the hiding place of the tesseract which Red Skull ended up storming.

It was also the place where Odin died and before he passed he told Loki and Thor that it was home. So Tonsberg is pretty important and it’s nice to see that it’s now thriving and running tours. I think that this place might get attacked by Gorr’s forces who could potentially be The Brood. They’ve been in the comics for a long time and are absolutely terrifying. Not 100% if it’s them but the creatures behind Jane and Thor do look quite similar.

This also looks like Tonsberg burning in the background which may end up being the fire that Thor walks through.

I kinda feel like they’re gonna attack and that’s when Thor and co will learn of Gorr’s plan and they’ll head out to try and warn everyone they can.

Now as you chumps know the best easter eggs on videos are often left by you guys who drop some brilliant ones in the comments.

I kinda wanna go over some of the other ones that I missed in the trailer which you spotted because ey, you’re probably better than I am at this s**t. 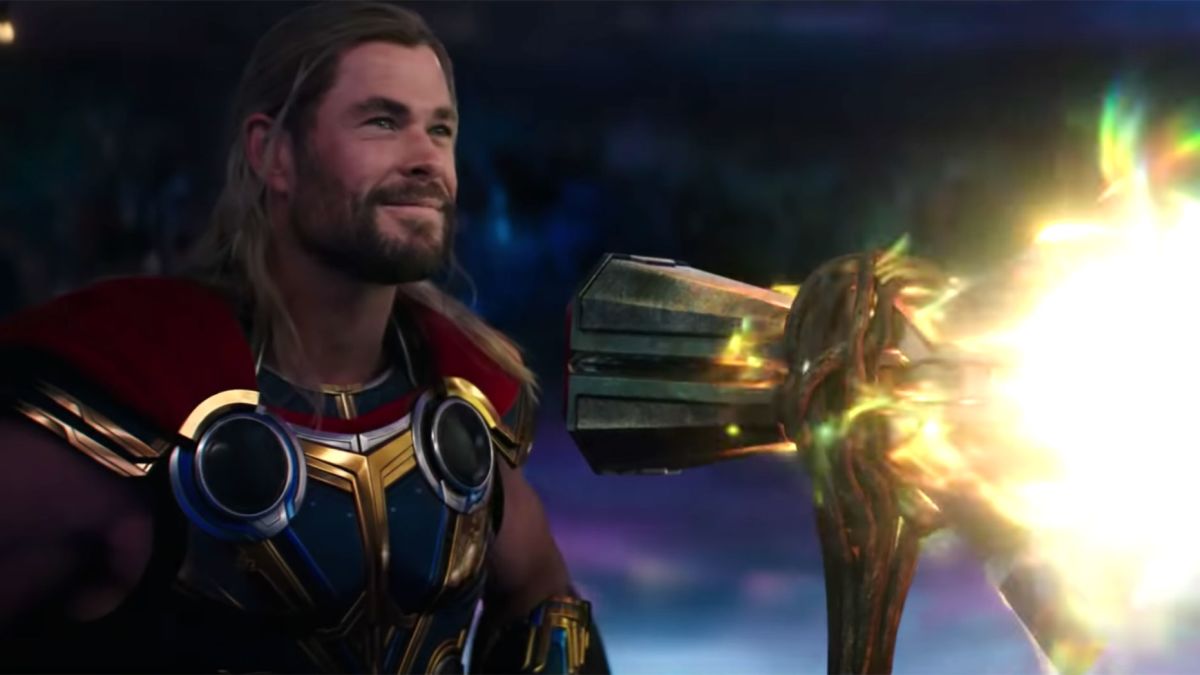 Now though we spotted the Avengers Logo on the cap that Thor was wearing whilst training, we didn’t notice that this is actually a nod to the 1987 film Adventures in Baby Sitting.

There’s a scene in that where Vincent D’nofrio is mistaken for Thor and he’s wearing pretty much the exact same style of clothes that Thor is wearing in this new teaser.

There’s also the running scene at the start in which we see his classic costume at one point. I really love this detail but we didn’t notice that the kid who starts off the scene might actually be Chris Hemsworths, son. Though this isn’t confirmed, when the movie was being filmed Chris dropped a post on his Instagram of the pair on set together so ey, I think it makes sense that they’d have him come in to play a young version of the character.

Lastly is the cocktail sign on the boat that we see leaving New Asgard, I did notice this but I had no idea that it’s actually the cocktails and dream sign from the Tom Cruise movie Cocktail. Huge thank you to everyone for dropping that in the comments as I’ve never actually seen the movie and I guess that’s pretty much all you need to know about this movie channel.

However as a thank you, I’m gonna give you an exclusive leaked image of Tom Cruise in Doctor Strange In The Multiverse Of Madness to end the video.

You chump. Ey we have a laugh at the channel don’t we. That’s for everyone who said Lashana Lynch in the Doctor Strange Trailer was actually Tom Cruise as superior Iron Man. You punk. I gotcha sucker but eh thanks I guess. Probably need to start being nicer to you guys and ey, and I’m just playing you know I love you really and thank you again so so much for getting us trending. The love you guys show the channel really means so much and I’m glad that you can have as much fun with it as we do even if I like to play a prank on you from time to time.