The Walking Dead is back on our screens after it’s mid-season break and it seems like the show’s creators are trying to take it in a brand new, bloodier direction.

After the apparent Death Of Rick Grimes and huge time jump in the prior part of the season, the mid-season premiere explores more of the world that our heroes have been left in.

Throughout this video I’ll be breaking down everything that you need to know about the latest episode as well as the direction that the show could be heading in.

There will be heavy spoilers here, so if you don’t want to know anything about the episode then I highly suggest that you turn off now.

For everyone else, I’m deffinition and welcome to the channel where I watch it so you don’t have to!

In the last episode not only did Naughty boy Negan manage to escape his Prison Cell in a Ted Bundy Tribute, but we also got introduced properly to a new band of Survivors known as The Whisperers.

These zombies with moves like Neo from the Matrix, managed to not only kill our Lord and Saviour, Jesus Christ but they also managed to scare the crap out of everyone watching.

Negan On The Run

The latest episode picks up with Negan on the run, after Judith let’s him go, informing him that the outside world is as vacant as her childhood.

Negan soon learns this and see that his previous camp is no more after returning to it throughout the episode. He attempts to return to Alexandria but is shot by Judith who warned him that she would do it if she ever saw him again.

She escorts Negan back to his jail cell and we get some nice hybrid figurative Father and Daughter moments that will probably become the spine of the show down the line. 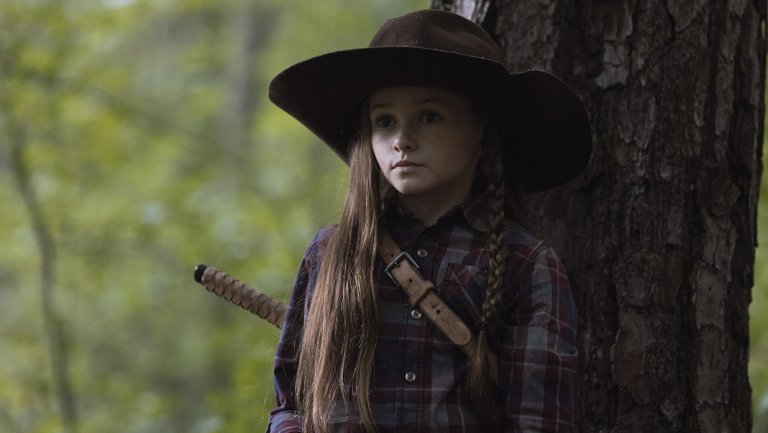 On their way back to Hilltop Michonne and Daryl manage to take a Whisperer hostage and unmask them. This turns out to be Lydia who is being paired up with Henry even though in the comics she paired up with Carl. Lydia is Alpha’s Daughter and is sort of a bad egg but also a good one in many ways.

In the comics it becomes the group’s mission to save her from The Whisperers and this makes the tension rise exponentially.

From here we learn that the Whisperers are survivors that wear the skin of the dead like it’s the latest fashion and use this as camouflage to be blend in.

Anyway onto the big thing to take from this episode. We learn that Rosita is pregnant and that it’s actually Siddiqs child and not Gabriel’s. Eugene overhears all this and isn’t happy after confessing his love to Rosita but let’s be honest, the guy has the emotional range of a Buckingham Palace guard so who cares.

The Episode ends with Luke and Alden Out looking for the search party that went missing and it’s here that they come across Alpha and are captured by the Whisperers.

In the comics, Alpha captures members of Alexandria, similar to what we saw in this episode. Luke actually isn’t alive in the comics at this point which doesn’t really bode well for his capture here so going ahead I think he will he killed and made an example of.

Alpha also is responsible for beheading Rosita in the books and obviously, this would be big news if she does this here especially with the character being pregnant but I can’t really see this being the case.

Your Thoughts
Obviously I’d love to hear your thoughts on the episode and what you think will happen going forward so leave them in the comments below!