This article we’re breaking down a very interesting update in regards to the Suicide Squad Ayer Cut.

Now if you’ve been living under a rock or in a parallel universe where Warner Bros actually released the films that they paid directors to make in the first place then chances are you haven’t seen the big announcement that the studio made this week.

As of 2021 the long awaited, much anticipated Justice League Snyder Cut will be making it’s way to HBO Max.

The movie is getting a rumored 30 million dollars spent on finishing the CGI and having the actors record additional dialogue.

It’s amazing news but it also left fans wondering if we would ever get a release of the other film that DC butchered, The Suicide Squad Ayer Cut.

Throughout this, we’re gonna be breaking down a major tease by AT&T that makes it seem like one day we will be getting it. We’ll also be discussing some of the details that are rumored to be appearing in the film as well as it’s ending.

Because of that there will be Heavy Spoilers here so if you don’t want anything ruined then I highly recommend that you turn off now.

With that out the way, thank you for clicking this now let’s get into our breakdown of the Ayer Cut news.

On Wednesday Zack Snyder did a live stream for Man of Steel which culminated in the announcement of the Sndyer Cut. This sent the internet into a frenzy and YouTubers like me realised that they needed something else to milk.

Luckily, fans quickly started asking what was happening with the Ayer Cut.

This was further fueled by Ayer who tweeted out a picture of the Joker…everyone’s favourite version of the Joker, hinting at a potential release of his intended version of Suicide Squad.

In case you don’t know the original film was actually far different to the one that we got. Ayer shot it to be more in line with Batman V Superman and Man Of Steel, however after negative reactions swamped the former of those two films, Warner Bros decided to change direction with their properties.

This lead to several major changes in the film and in of course Justice League which was in production at the same time.

Ayer didn’t even get final say over the edit of the film and this was passed over to a company that specialized in making movie trailers.

It was all a bit weird and the film was still received negatively, making a lot of fans wonder whether it was even worth it.

So to cut a long story short, now that Warner Bros have righted the wrongs of releasing the Snyder Cut.

It looks like they may give the same treatment to Ayer.

Now it was further teased by AT&T who currently own Warner Bros.

After a fan asked the company whether we would be getting a release of the Ayer cut, they replied with a tweet that said one thing at a time.

David Ayer then quoted this and said standing by to which they replied With a Harley Meme in which she smiles.

So bit of teasing there, you know just a bit…don’t start tweeting #ReleaseTheAyerCut just yet. But wait…there’s more.

Twitter account Fanboy clay then tweeted this always this and then…then…AT&T replied with a gif of everyone’s favourite suicide squad villain Enchantress saying Anything is possible all it takes is a little magic. 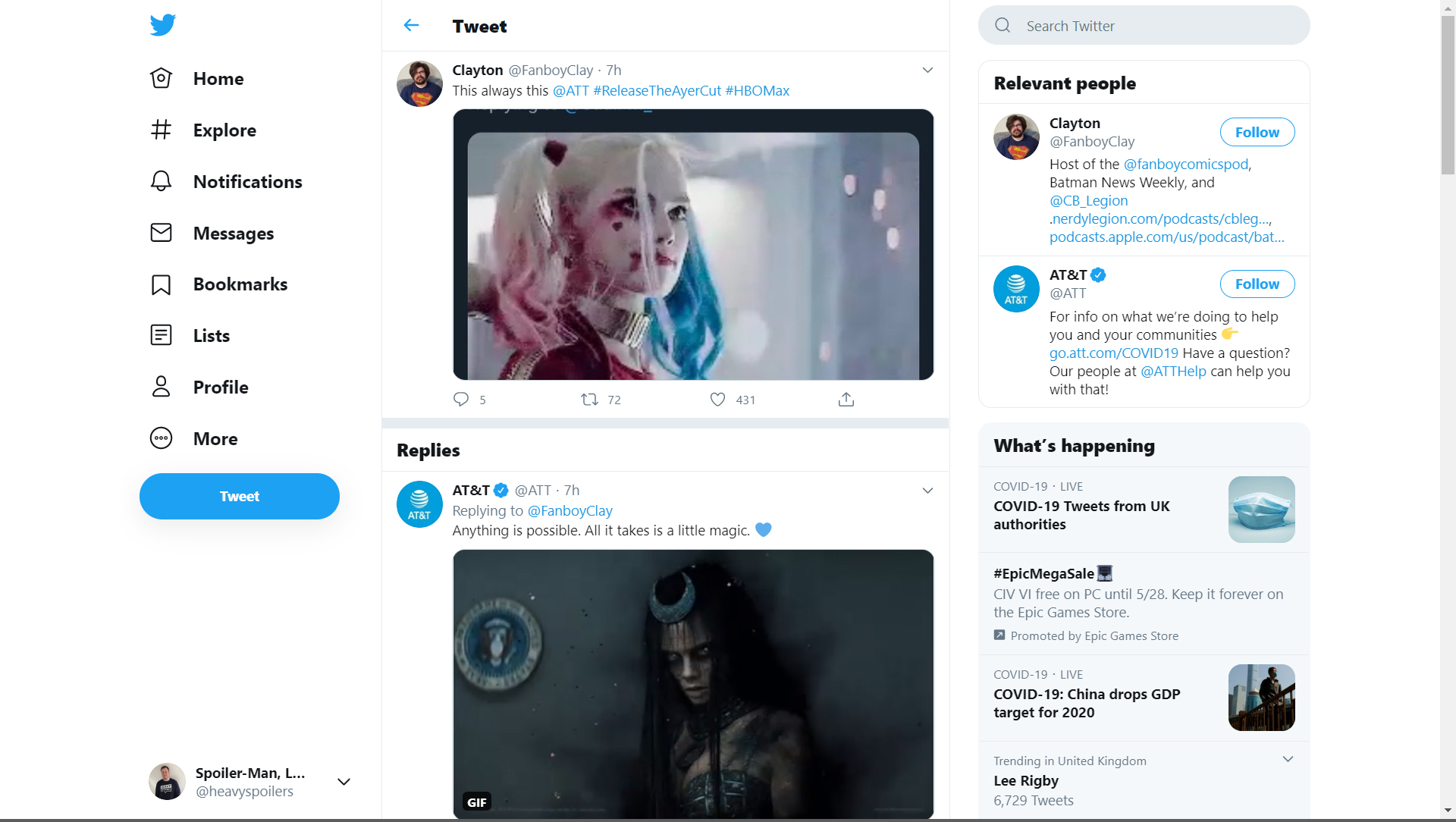 So yeah, whilst this isn’t a direct confirmation, for the corporation to be tweeting this it does seem like the ball is rolling and that they are finally giving the fans what they want.

We’ve pretty much all woken up in a parallel universe known as the Snyderverse.

A universe where there’s no need to CGI out a moustache and Will Smith is one of the greatest comic book characters of all time.

Now whilst this is no confirmation, website The Culture Nerd posted an article this morning that stated that they had found out from insiders that VFX studio Zoic Studios had been commissioned to finish the cgi on both the Snyder cut and Ayer cut.

So whilst this isn’t complete confirmation either and all reports like this should be taken with a pinch of salt, it does seem like the wheels are indeed in motion.

Zoic has apparently been brought on board to make adjustments to Superman’s black suit, change Steppenwolf back to how he was and also revert the Parademons to their original appearance.

Multiple studios are working on the project but these are the only ones that have been tied to the Ayer Cut.

Fan reception has been so positive towards the Snyder Cut that it seems like the Ayer cut would be another home run for HBO Max.

They’ve managed to drum up so much publicity for the platform in the last couple of days that it just makes sense to do it. If the Snyder cut is successful, who knows, this could massively change the shape of the DCEU and the studio may even go back to the direction that things were originally heading as the fan support is definitely there.

Now what differences are in the Ayer Cut?

Well if you’ve been following Ayer then you’ll see that he’s teased a tonne of differences.

Unlike the Snyder Cut the Ayer Cut was actually finished pretty much and the studio just decided to release the one cut by the guys who made the original sonic trailer.

Shoutouts Superhero Nexus for breaking down a lot of these details and they really paint the film in a new light.

Jared Leto has openly spoken about how much of his characterization was left on the cutting room floor and it’s definitely shrouded in a lot of mystery. 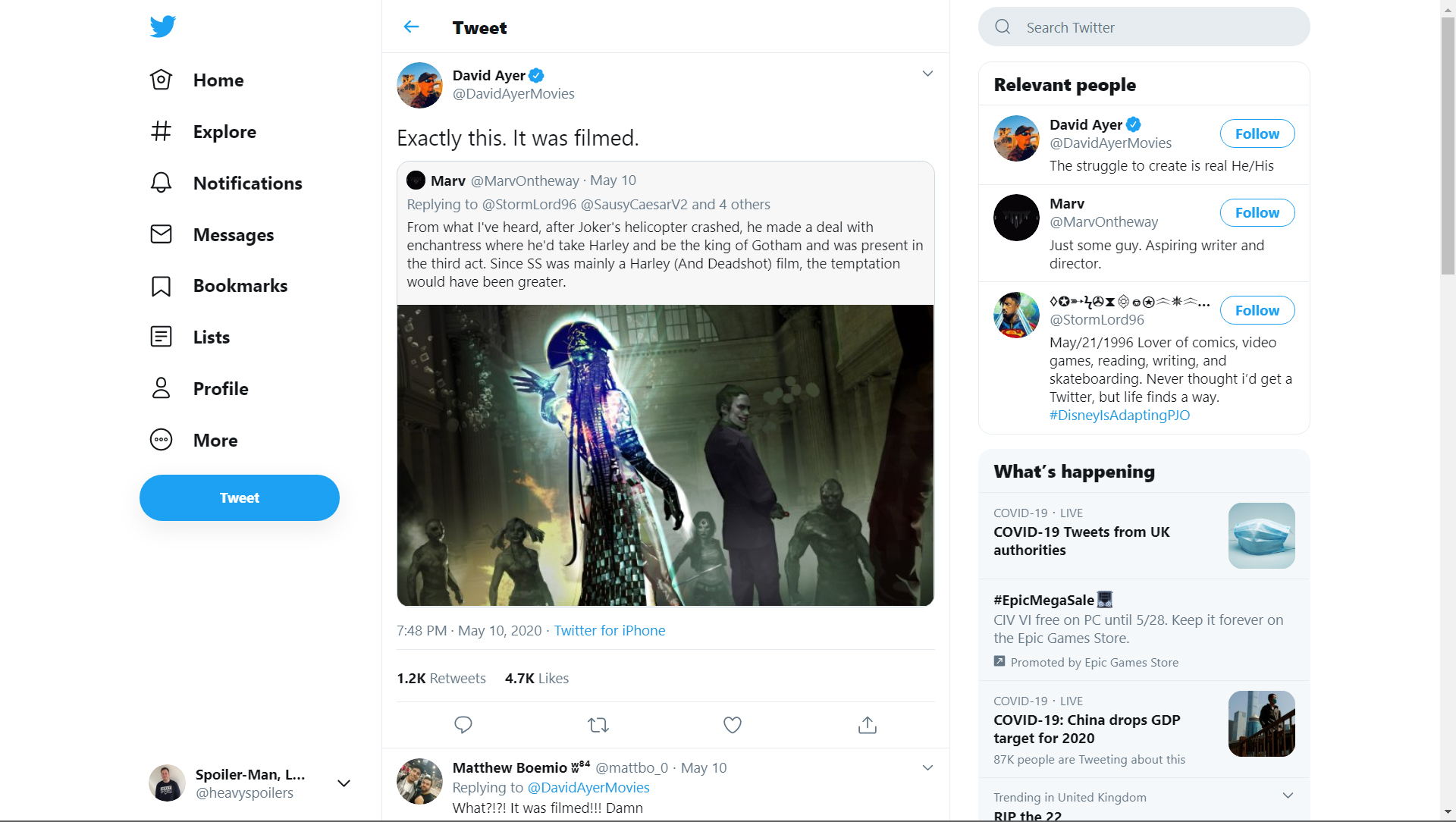 The film was originally a Harley and joker story that showed a lot more of their relationship from almost beginning to end. It would show the toxic relationship between the pair and just how much he manipulated her and had her at his every beck and call. The film was very much similar to the style of Birds Of Prey tonally in which it centered around her breaking free of his grasp and making it on her own. The back and forth between the two would culminate in their relationship falling apart as Harley falls out of the helicopter.

This would symbolize her finally breaking free.

At the end he would show up for the enchantress battle with his face badly scarred as we saw in the trailers. Unable to control Harley any longer he would make a deal with Enchantress to become the King Of Gotham and to get her back.

From what I’ve heard, after Joker’s helicopter crashed, he made a deal with enchantress where he’d take Harley and be the king of Gotham and was present in the third act. Since SS was mainly a Harley (And Deadshot) film, the temptation would have been greater.

The fight then happened but unlike the theatrical release the movie ended with Steppenwolf arriving on Earth and we actually saw people kidnapped by Parademons which set up the Justice League.

It was revealed that Steppenwolf was actually controlling Enchantress through a mother box and we saw the forces that she had turned into Parademons instead of the suit from the Invisible man.

Steppenwolf wanted to invade the planet and take things over.

Now judging by how this tweet is answered it is even possible that Steppenwolf may have been a villain for the third act. After all he was teased in Batman V Superman…well depending on what version you watch and thus die-hard dc fans would know who he was at the very least.

So not only was the movie setting up the next one to come, it was also showing the depths of Steppenwolf’s reach. According to Superhero Nexus, Steppenwolf would be seeing if he could beat who he viewed as earth’s best team and this pushed for the Justice League to be formed.

He was also meant to take over the power plant which we saw appear in Snyder Cut, so yeah tonnes and tonnes of things that really build the DC Universe as a whole.

After the Snyder cut release it feels like anything is possible at this point.

Ayer has slowly been building a lot of hype surrounding his movie and fans are clammering for more of the directors original vision to finally be brought to the screen.

As mentioned earlier if the Snyder Cut is successful then I can definitely see HBO making an announcement to say that the movie will be coming to their new streaming platform as it just makes sense to portray the way that the DCEU should’ve been if they are going with the Snyder Cut.

At the moment it just feels like an amazing time to be a DC fan. There’s just so many good things happening at the moment that you really get the feeling that they might actually give Marvel a run for their money at this point.

As someone who loves both companies I really can’t wait to see what happens and yeah 2021 is shaping up to be an amazing year for movies. Can’t be worse than this one at least.

So very excited, good times, the best of times, it really puts a smile on my face. I’m trying not to overload the channel with Snyder cut stuff at the moment but when the news is this good it’s hard not to.

Obviously I’d love to hear your thoughts on this announcement and if you’re hyped for it or not. Comment below and let us know!