Resident Evil 2: Remake has just been released and the incredible game is already a hot contender for the game of the year.

The game features several endings and throughout this video, I’ll be breaking down everything that you need to know about them and how they differ slightly from the original PS1 Classic. This entire list covers both of Claire and Leon’s ending as well as the true one that only the most die hard players will be able to uncover.

There will, of course, be heavy spoilers here, so if you don’t want to know anything about the final scenes then I suggest that you turn off now.

For everyone else, I’m Deffinition and welcome to the channel where I play it so you don’t have to!

Starting with ladies first, by the games ending, Claire is heavily preoccupied with finding a way to cure Sherry who has been infected with the G-Virus. When searching for this, Claire is ambushed by G-Birkin, a heavily mutated form of William Birkin who is one of the main antagonists of the game.

When Annette Birkin arrives, she informs Claire that G-Birkin is, in fact, her husband. She tells Claire that her husband, William, was actually dead set on betraying Umbrella and only injected himself after being shot by their agents who were sent in to retrieve samples.

William severely injures Annette and Claire hands her the antidote to cure Sherry whilst she stays and fights the beast returning to Sherry’s location upon defeating it. Here she discovers Sherry has been cured but Annette is on the brink of death. A self destruct sequence initiates on the facility and the two flee to the escape train together. On the way, William shows up once more and Claire manages to kill him and also gets a message to Leon to tell him their plans.

The three flee together and manage to get out of Racoon City alive.

Whilst Leon’s scenario concludes similarly to Claire’s there are some major differences.

After convincing Leon that she is an FBI agent, Ada convinces Leon to help him secure a sample of The G Virus. Fans of the series will, of course, know that the enigmatic Mrs. Wong isn’t quite what she seems and it seems that this ending doesn’t clear any of the unanswered questions up either.

After securing the sample and running into Annette and William Birkin, the latter seriously injures the former. Annette informs Leon about William and also reveals Ada is not an FBI agent, stating that she is actually a hired gun sent in to retrieve the G Virus so that the company she works for can sell it to the highest bidder.

Eventually, this culminates in the two facing off against each other. Unable to shoot her, Leon puts his gun down but Annette saves the day and comes in and shoots the character, which, similar to the original version of the game, causes her to fall from the catwalk.

The lab is now in full self destruct mode and Leon flees and all seems like he is about to get away scot-free until he is confronted by the Tyrant on an ascending elevator. During the fight, Ada throws Leon a rocket launcher which confirms that she survived the fall somehow. Leon uses the rocket launcher to kill the monster and he, Claire, Sherry and flees on the train similar to Claire’s ending. Leon reminisces over Ada stating that he can’t believe he misses her as the train rides off.

To unlock the game’s ‘True Ending’ players have to complete the game twice and finish the second run through. Similar to Claire and Leon’s original endings the three surviving characters make it to the train but this is where things differ highly.

On the train, the player is attacked by William Birkin’s final form which sees him mutate into a massively hideous blob of eyes, tentacles, and teeth. Fans of the original version will remember this fight well and the terrifying creature creeps towards you slowly as you try to fend it off.

Those who manage to make it through the fight will get the games proper ending which sees the characters finally making it out of Racoon City. They abandon the train and wonder how far the virus has spread throughout the world. An ominous tanker approaches which Leon stands down, wondering if the rest of the world is infected, which is quickly put to rest when the trucker gives him the finger.

We learn that it’s been just another boring Wednesday for the rest of the world as Sherry jokes that the two should adopt her and get a puppy. 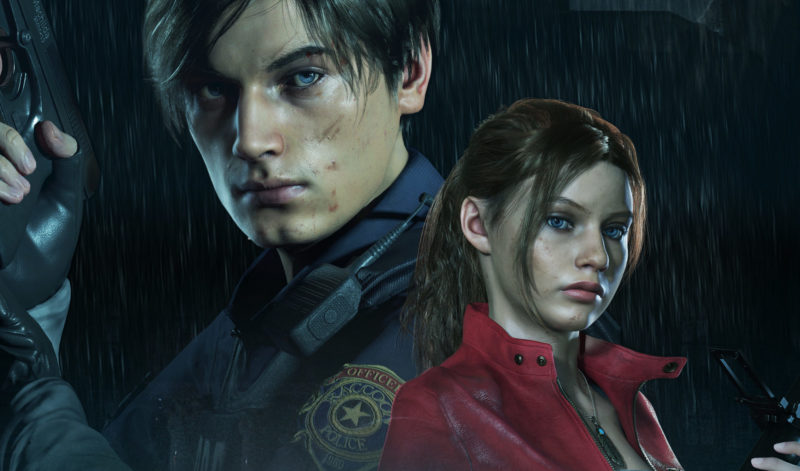 So, what were your thoughts on Resident Evil 2 and did you enjoy it’s endings? Comment below and let me know!