Ok so the Obi Wan Kenobi Trailer has a lot of people talking about the return of Ewan McGregor. However, he isn’t the Obi-one people are discussing and alongside him there’s a lot of hype for the Grand Inquisitor who’s making his live action debut in the show.

But what are his hopes?

Ok so up until now the Grand Inquisitor has very much remained in the expanded lore like the animated shows, comics and games. Seeing him in live action is a major turning point for the inquisitors and though people are complaining about the costume look, I’m still really hyped for their arrival.

Incase you don’t know Inquisitors are basically Jedi hunting force sensitive soldiers that scour the galaxy looking for the remnants of the Order.

They’re all extremely tragic figures and at one point most of them were actually Jedi themselves. Between the events of Revenge Of The Sith and A New Hope, Darth Vader built up a group of them and he enhanced their abilities by teaching them the ways of the dark side. Typically Sith always come in two with there being a master and an apprentice, however, nice little loophole here, you can actually have as many as you want if you call them Inquisitors.

If you’ve played Jedi Fallen Order then you’ll know that we open with Cal Kestis lying low on the planet Bracca. After he saves someone by using the force they’re alerted to his presence and I very much feel like the Obi-Wan show might be in the same vein. Cal was a downtrodden worker much like what we see with Old Ben and I think that he’ll have to use the force at some point which will alert them.

It looks like along with Inquisitor Reva and Brother Five that The Grand Inquisitor too travels to Tatooine and this is where he will be looking for Obi-Wan. However, there are a number of other avenues that they could be going.

Now it is possible that they’ve just been sent to Tatooine to intimidate those that live there. Whereas the Jedi were peacekeepers, these are peace makers…and by that I mean they’ll kill any man, woman and child to make sure that the peace is kept.

Beyond that though the Inquisitors were assembled together after The Emperor sensed a new threat rising and this came in the form of children who slowly started to tap into their abilities. The teaser shows us a young Luke Skywalker, and not only is the de-aging by Lucas film getting better and better, it also shows he may be their possible target. Owen Lars makes a big impact in the teaser and though he says very little, I think that the guy will likely be protecting his nephew. The comics had a big section where he basically refused Obi Wan to even be allowed near him because of the danger he will pose.

We know that the show will actually take place ten years after the events of Revenge Of The Sith and pretty much all of the Jedi have been dwindled down to very low numbers.

Obi Wan will likely have to weigh up whether to go near Luke or not, knowing that if he does it will put him in danger.

Now because of the low numbers of the Jedi, I actually think we will see a lot of things from the perspective of the Inquisitors. Judging by the teaser we’ll even be visiting their fortress at some point. This actually appeared as the final level in Fallen order and it exists not only as a structure that dominates the surface but it also has massive facilities under the sea. 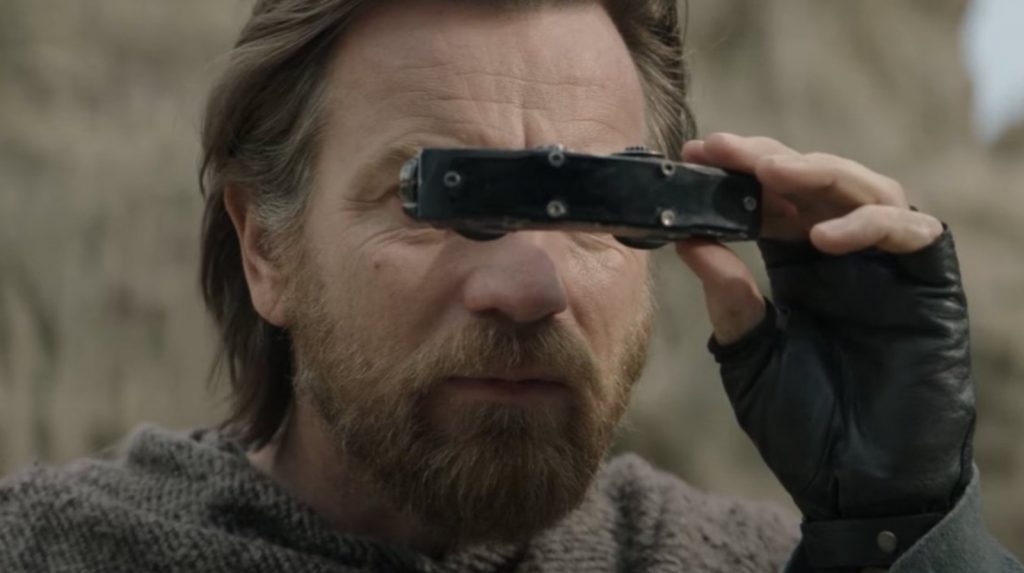 The Inquisitors In Star Wars Rebels

Now The Grand Inquisitor himself made his debut in the Star Wars Rebels Premiere titled Spark Of The Rebellion. He was actually voiced by Lucius Malfoy aka Jason Isaacs who always makes for an intimidating villain.

However for the show he’s gonna be played by Rupert Friend, but he’s not your friend, he’s dafoe you got to look out for because the guy is a really brutal actor. Friend played Agent 47 in the second Hitman movie and he’s definitely got that uncaged side to his personality that I think will work really well with the Inquisitor.

He’s a Pau’an male that was recruited by the Emperor and Vader to track down any potential threats that could come from emerging Jedi. In the Rebels show this came in the form of Ezra Bridger, a young kid that we watch mature over the seasons as he comes to grips with his powers.

Later on in Season 2 we actually found out that the Grand Inquisitor used to work as a temple guard on Coruscant. After the fall of the order he was embraced by Vader and though Rebels didn’t show them interacting all that much, I think that the series will expand on this. We know from the sizzle reel that Vader has a hologram chat with someone from his palace on Mustafar and it’s likely that this will be The Grand Inquisitor. He actually had hologram chats with him in the mini-series so I am expecting a lot of exchanges like that to happen.

As you can guess from this, he’s ranked way above the other Inquisitors including Fifth Brother, Sixth Brother, Seventh Sister, Eighth Brother and Ninth Sister. There’s also Inquisitor Reva who’ll be appearing in the show though we don’t know her full denomination yet.

He also wields a double bladed lightsaber with a circular handle which most of the Inquisitors also do. You can actually catch one on the back of them in the teaser and when held in the middle the blades spin around on this in a helicopter motion.

During the new look the Grand Inquisitor does some amazing baton twirling at one point which will be him busting out this technique that I’m calling the Thanos.

Before you start as well yeah, I know these guys did it first yeah, we just like doing pop culture references in the videos yeah, don’t lose your s**t mate, sit down and have a drink.

Now the series had him going toe to toe with Ezra and Kanan Jarrus, the two of which were master and apprentice. However, because of the way the show plays out we actually know what happens to the character after the events of Obi-Wan.

On his hunt he managed to capture Jarrus and the rest of Kanan’s crew ended up infiltrating Grand Moff Tarkin’s Star Destroyer to save him. Things went to s**t and it led to the villain facing off against not only Kanan but also Ezra too.

During the battle it seemed like The Inquisitor actually killed Ezra and this spurred on Kanan even more to finally beat him.

The Grand Inquisitor tried busting out the Thanos which Kanan used to his advantage. He placed his and Ezra’s lightsabers in the middle and bust up the handle which made the blades plummet over the edge. This caused a chain reaction at the facility and the Grand Inquisitor held onto the edge.

He hinted that there were some fates worse than death and he allowed himself to plummet into the fire caused by the explosion. This is a very ambiguous statement but we can take from it that he would have rather perished than have to deal with Vader and the repercussions for his failings. Let’s be honest yeah, lads a nightmare. 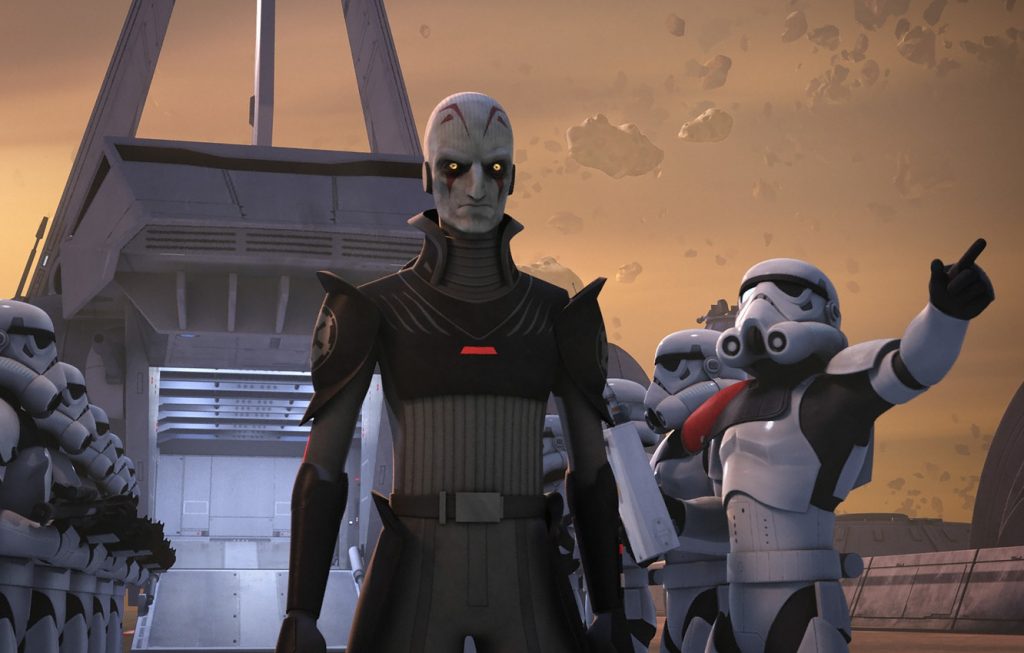 Now though it seemed like he had died, it was revealed later on that he was actually still alive. Darth Vader trapped his spirit on Tempes where he served as a guardian for the Jedi Outpost on the planet. Luke Skywalker ended up coming across him and this all played out in the comics.

The pair dueled and Luke managed to beat him and he left the temple behind. Vader arrived after sensing Luke on the planet and here he asked if his spirit could finally be released.

Guy was like, bro can I leave mate, don’t really like being here and Vader was like nah, think you can just stay here mate. You d**khead.

So this is the fate that was worse than death however there’s something that’s actually much much worse for that and in real life the guys actually a villain Angry Birds 2.

Which…hrrrrr…makes you realise how lucky you are.

All in all I can’t wait to see what the character gets up to and I think he’s a great aspect of the show. Yeah the costume looks a bit wonky but ey, it’s all in the performance baby. Let the guy live, seems like a nice guy and that.

Now obviously I’d love to hear your thoughts on the group and what you think of the costumes. Let me know if you’re hyped, if you’re not and basically anything you wanna say to help push me in the algorithm so I can make enough money to buy my own lightsaber.