Welcome to the Heavy Spoilers show I’m your host Paul aka the guy who has a Sith Sense when it comes to spotting easter eggs.

The first trailer for the book of Boba is now here and throughout this video we’re gonna be breaking it down, pointing out all the things you missed and also giving our theories on where the story could be going.

Full Spoilers ahead for the story so far and I also will be talking about elements of the Bad Batch so if you haven’t had a chance to check it out then I highly recommend you check out now. Yoda man if you like the video and make sure you subscribe as we’re gonna be covering the show when it releases in December.

With that out the way, thank you for clicking this, now let’s get into the Book Of Boba.

Ok, so the Mandalorian Season 2 sort of filled us in on exactly what happened after Boba Fett got up close and personal with the Sarlaac. After escaping the 1000 years of digestion that he would’ve been subjected to Fett remained on Tattooine.

His armour was taken by Cobb Vanth, Vanth Refrigeration and after it got handed over to Mando Fett ended up partnering up with Fennec Shand to help him stop Moff Gideon’s forces.

Episode 8 of Season 2 ended with Fett returning to Jabba’s Palace and after killing Bib Fortuna he took over the throne with Shand by his side. It takes two to Jango and it was an awesome way to end the season.

Now in the Bad Batch, we learned that much in the same way that Boba was the Alpha clone of Fett that his sister Omega was well…the Omega. She was the first clone to be assigned a different gender and it is possible that she will be showing up in the series as she will be the same age as Fett is.

Now all of the titles for the episodes were leaked earlier in the year and much like The Mandalorian they will be divided up into Chapters. Interestingly, Book Of Boba will apparently start at Chapter 17 which means that it’s a direct continuation of The Mandalorian. The Episode titles are called: The Champion, The Assassin, The Syndicate, The Battleground, The Homeworld, The Warlord, The Showdown and The Hunter. So by the sounds of it, Fett will basically be coming across different characters every episode similar to the set-up of The Mandalorian.

Now we start off with the cavernous rocks outside of Jabba’s palace and we see the B’omarr order which is a spider-like droid that could be spotted in Return Of the Jedi.

These originally were a group known as the Bomarr monks who believed that in order to achieve enlightenment that they had to transform themselves into something that would completely isolate their minds. They had their brains put into jars and used these spider-like droids to move around.

We then hear Fett state that he’s not a bounty hunter and this is questioned by a voiceover who says that he has heard otherwise. The voice states that he knows he sits on the throne of his former employer and this is clearly a reference to him taking Jabba. Throughout the trailer, it’s said that Jabba ruled with fear whereas Fett rules with respect. It’s clear that he knows that if everyone is scared of him that they might try and overthrow him so he’s trying a different approach which involves co-operation.

Now according to the leaks at some point in the season, Fett will be hunting for a Rancor. The one in The Return Of The Jedi died so we know that it isn’t that one, however, The Bad Batch featured a Rancor called Muchi which could indeed be the one that an episode centres around. The one in Return Of The Jedi was called Pateesa and though we never had it confirmed, it was thought that Muchi could be the child of Pateesa. This is because, at the end of Episode 5 of The Bad Batch, Bib Fortuna came to pick it up and thus everyone kinda took it to be that it was one and the same.

Now that does mean that Muchi could’ve been at Jabba’s palace and then have escaped which would set up the episode that we will apparently be seeing in the show.

Whether this moment is that we don’t know but it does sort of line up with the leaks.

We then catch an Ithorian and this very much sets up the idea that Fett is visiting several different factions and species in order to form an alliance.

Now the Syndicate episode is likely centred around one of the syndicates in the Star Wars canon. These include Crimson Dawn, The Black Sun, The Crymora Syndicate, Hutt Clan and Pyke Syndicate.

All are as bad as each other and if you wanna negotiate the underworld of the Star Wars Galaxy then these are people that you’re gonna have to go toe to toe with at some point. 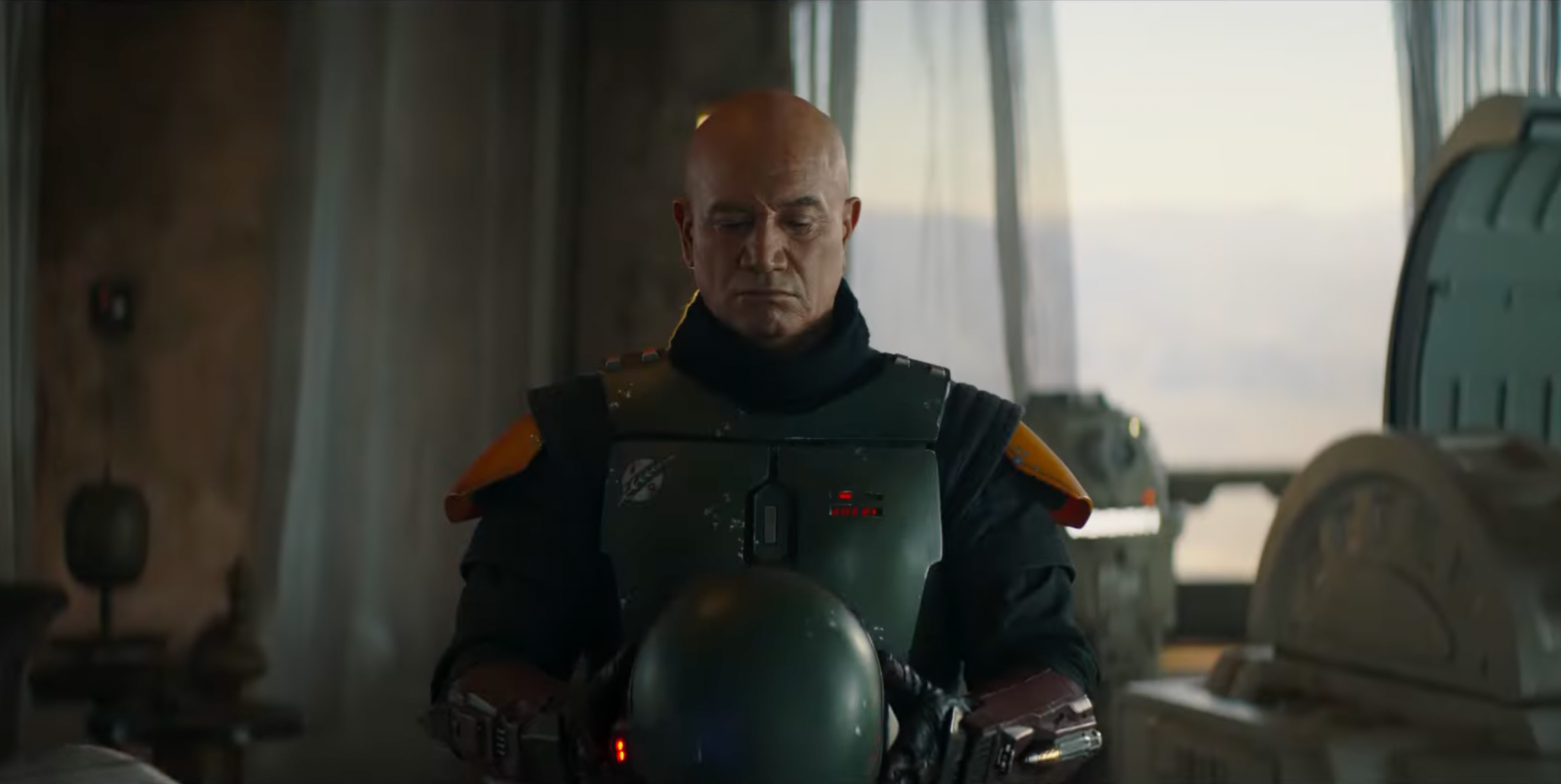 Now from what we see in the trailer, I’m not 100% whether Fett will be coming face to face with them but it is possible that the syndicates are very much the ones that we see him having dinner with. Shand says that they were all once captains under Jabba but it is possible that they lost this control under Bib and this is sort of why everything fell apart. Perhaps they lost their positions after Leia killed him and since then they haven’t had the power to Leia finger on the power set up of Tattooine.

Amongst these, we see a set of Aqualish who are the same species that Ponda Baba was. At the table, we can also catch some Trandosshans which are the same species as Bossk. I’d love to see Bossk in this series and that would make for a really cool callback to the original saga.

Now we see that life isn’t easy for Fett and there are two brand new characters that point guns at him. In the background, we can catch the gammorean guards and it’s likely that he inherited these after taking over the reins of the palace from Bib Fortuna.

We also see some Tuskan raiders…sorry sand people…sorry is it Tuskan Raiders, walking the desert and the Mandalorian very much showed that they could be allies which lends itself to the idea that Fett is building an order.

We also catch Some twi’leks which the dancer at Jabbas was. It’s nice imagery to include these as the one in the palace was of course sent to her death whereas here it looks like Fett is actually reaching out to them.

Next, we cut to a shot of Fetts helmet rolling on the ground and out of it coming spinning credits with the rebel alliance logo on them. This is taking place after the return of the Jedi so it makes sense that these would be here as they’re now running the show.

The imagery of this also somewhat recaptures the death of Jango who was beheaded by Mace Windu and it shows that Fett isn’t gonna have an easy time.

They are attacked by Guards with shields that look like they’re using the same technology as the ones from The Phantom Menace. They have a burgundy uniform on and it could be that they’re part of the same operation that we see with guns drawn earlier in the trailer. It is difficult to tell what’s going on in this first look and personally, I don’t actually think they’re showing all that much beyond the first couple of episodes. That’s why everything sort of looks like it’s on a sand planet and why it seems like Boba is very much getting started.

Now he’s able to dispatch the guards quickly and he busts out some of the moves that we saw him using in the Mandalorian to take them out. It shows that he’s brutal when he needs to be and this is somewhat juxtaposed by one of the crime captains vacating the table to which Shand says that Jabba would have killed them for.

However, Fett wants to work with them and it’s a nice way to close out the trailer. He sits back on his throne looking like the king and I love how he exudes power even though he’s not being threatening. He’s got a very hoth and cold demeanour and it’s a great way to close out this teaser.

I’ve got a ‘good’ feeling about this

Now as for my general reaction and thoughts on the trailer I have a really good feeling about this and the teaser is a great set-up for what’s to come. There’s just a really grim and gritty feeling to the entire thing and I love how authentic it feels to the original trilogy. The Mandalorian did an excellent job of capturing the aesthetic of the sort of rusty, grimey and almost second hand feel that the original trilogy has and this is no different.

Everything kinda feels lived in and it looks absolutely incredible.

Boba Fett is one of those characters that was a fan favourite the moment that he appeared on screen and I was absolutely fascinated with him as a kid even though he kinda went out like a chump and barely did anything in the original trilogy. He’s always had this allure to him though and the expanded lore very much helped to cement his legend even if the main trilogies kinda kept him out the way.

Then The Mandalorian was announced and a lot of people, well me…I dunno how you felt, it kinda seemed like that would be the Fett show that we should’ve got even if all the characters were all different. That’s why it was so amazing when Disney brought him back and I’m so happy that we’re getting a full TV show centred around the character and what he’d go on to do.

He’s still known as the Galaxy’s most fearsome bounty hunter and this brand new look really knocks it out of the park and lets you know that Disney isn’t messing around. Can’t wait to watch it and the king is back. He’s back baby.

Now obviously I’d love to hear your thoughts on the trailer so make sure you comment below and let me know.

There’s a tonne to talk about and I’m sure I missed some easter eggs so make sure you drop them below.

We’re running a competition right now and giving away 3 copies of the Zack Snyder’s DC Trilogy on the 30th Of November. All you have to do to be in with a chance of winning is like the video, make sure you subscribe with notifications on and drop a comment below with your thoughts on the episode. We pick the comments at random at the end of the month and the winners of the last one are on screen right now so message me @heavySpoilers if that’s you.