Avengers Vs X-Men is a title that has a lot of weight to it…and rightly so. Over the past 30+ years, both teams have established themselves as some of the most prestigious groups in comic books.

The Avengers recently rose to prominence due to their major MCU blockbusters and the X-Men movies aren’t too shabby either but can the two teams facing off against one another provide a compelling narrative?

That’s what I’m here to find out!

Throughout this review, I will be breaking down everything you need to know about the story to inform you as to whether it’s worth picking up. There will be heavy spoilers so those who don’t want to know anything should skip to the score and come back to this review at a later date.

For everyone, let’s dive into Avengers Vs X-Men!

We join Hope Summers, a member of The X-Men with a huge target on her back. The Phoenix has its sights set on the girl and the repercussions of this start a war between Homo Sapiens and Homo Superior.

Cyclops believes that the Pheonix will save his species whereas The Avengers believe that the return of the creature will lead to the destruction of The Earth.

It’s a really gripping battle that I found myself instantly caught up in. It’s easy to be empathetic towards both sides of the argument and I adored watching the two teams give it their all early on in order to avoid what they see as the inevitable destruction of their race.

At its core is a tale of a teenager coming into their own and no matter what background you come from you will find something from the work that you can relate to which is a credit to its storytelling.

Cyclops is always a character that I’ve always been a bit hit and miss on. To me, he’s always seemed like the teacher’s pet that I found about as deep as a puddle. However, AVX does astounding work with adding complexity to his psyche that paints him out as a tortured soul, desperately trying to do the right thing, even if it does turn him into an enemy of the state.

When he refuses to give up Hope to the authorities, The Avengers storm his Mutant Refuge and the battle is breathtaking to behold.

I loved seeing the two sides get ripped apart and there some really outstanding moments that let you know that no one is holding back.

Hope escapes when she has the opportunity and the midsection of the story deals with both sides trying to track her down before the other one does. It’s a hell of a plot line and one that will keep you constantly on your toes with is a credit to the creators and their presentation of the story. 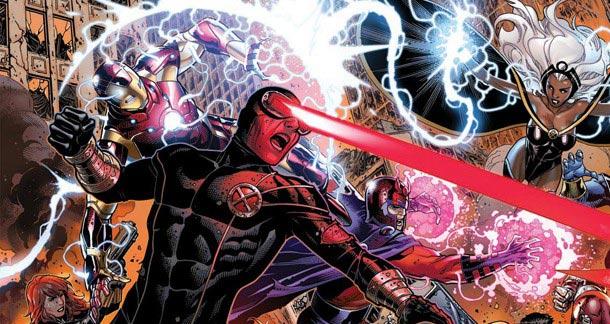 The conflict even throws people on the same side as one another and Wolverine, who was originally opposing the X-men, decides that enough is enough and that he has outgrown the group.

He and Cap have an excellent showdown that exudes beautiful flashes of red across every panel it takes place.

This eventually leads to Logan tracking Hope on his own and the two form a friendship that ends up being the driving force of the story. They journey to the moon and whilst this plot doesn’t sound that interesting on its own there are several fights that pad out the drama. They are, for the most part, skipped through, showcasing only the highlights to due the supplementary book: AVX VERSUS, which fleshes them out in greater detail.

Whilst some fans may be annoyed that they have to buy another storyline to get the full picture, to me it removed some of the filler moments of the book and streamlined it to great success that pacing wise, feels perfect.

The Blue Side Of The Moon

When Hope arrives at the moon so do the X-Men and The Pheonix. Using his new armour, The Pheonix Killer, Iron-man attempts to take down the intergalactic force but fails and in doing so, allows the Pheonix to possess all of the X-Men.

With their unrivaled power, they create a Utopia and whilst things seem pleasant enough on the surface, the Avengers know that there exists a sinister side to the new paradise.

When they manage to pull Hope away from the situation in an incredible kidnapping mission, Cyclops and Co realise that the only thing that stands in between them and a perfect world is The Avengers. They vow to end them once and for all and the book really steps up a gear from this point onwards.

The face-offs happen on a worldwide scale and the locations alone easily deliver the scale that The Avengers facing off against The X-Men deserves. This book really nails the storytelling throughout and I was completely hooked as we headed into the climax.

‘Hope Stopped Him…And I Think I Know How’

With Cyclops now rivaling the powers of a God, Hope is the only…well…hope of defeating him. She helps to rally together the X-men that are disapproving of Cyclops’ ways and together they storm his Utopia.

It’s an awesome battle that contains several meaningful moments that really hammer home just how important this storyline is.

The book concludes with Hope regaining the Phoenix power and using it to bring life once more to her species. It’s a somber ending that will really stick with you long after you put it down due to its incredible art and dialogue.

It’s breathtaking to read and is the perfect way to conclude the book. 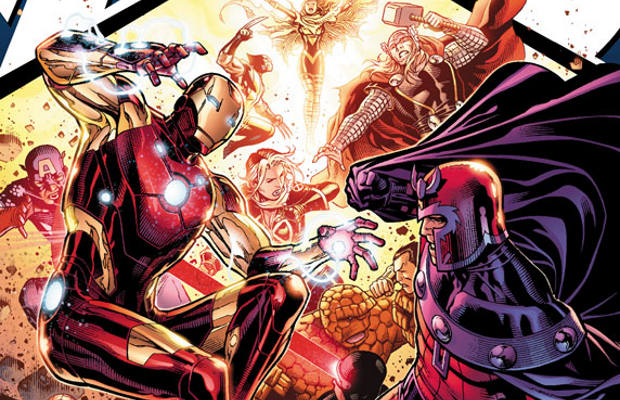 AVX is outstanding. From beginning to end the graphic novel delivers page after page of classic moments. This is one of the best Marvel Graphic novels that I’ve read from the modern era and delivers on almost every level in terms of size and scope.

However, at its heart, this is a human story about ideologies and that is where the book really thrives. Similar to Civil War, this work sets up two sides and allows the reader to invest in a team due to the awesome fleshing out of perspectives.

Avengers Vs X-Men is incredible, simply incredible and that’s why it gets a…