Skip to content
365 Days: This Day Ending Explained | Does Laur...

So 365 DNI 2 is out and the movies dirtier than Amber Heard’s bed sheets. The film makes the first one look Oscar Worthy and for as s**t as it is I just can’t get a bloody nuff of it. .

Everyone who’s been asking why we haven’t had the time to cover Better Call Saul is about to have a meltdown because we’re lubing up and going in deep on this Netflix classic that’s about to win all those subscribers back.

So if you don’t recall because the writers didn’t, the first movie ended with Laura heading into a tunnel just as a mafia rival of Massimo was about to attack. She was pregnant and heading back from trying dresses on as the movie closed out with it seeming like she was about to be either killed or kidnapped.

What was the outcome? Was Laura taken? Was she murdered? Will Massimo head out on a rip roaring rampage of revenge and shagging? Well no, not really as the movie glosses over that like the dialogue scene and we get some simple lip service paid to it. This movie is of course based on the book series and this loosely follows the second one in the series with Massimo’s twin brother coming onto the scene. The second book is essentially a retread of the first one but This day and I can’t believe I am saying this, tells a better story.

Now the movie starts off with Laura having her pasty smashed more than someone who angered a Gregg’s worker but reveals she sadly lost the baby. Her mate Olga finds them consumating before the wedding night and says it’s bad luck to destroy your brides box before the big day which yeah, it goes downhill for them from here on out.

The lack of any continuation of the storyline from the first movie is justified as Massimo didn’t know she was pregnant and they don’t want to start a war.

We then cut to the wedding day and hear the song Ave Maria and deep down I hoped that the Riddler was watching over them about to start a killing spree.

We get a montage of sex as Laura spreads it on the green for an easy shot down the fair way for a hole in one and Massimo’s friend hooks up with Laura’s buddy Olga because well, I guess the writers thought there wasn’t enough hanky panky. I watched the movie at 1.5 speed and it look like an X rated Benny Hill but with attractive people.

After the honeymoon, Massimo is back to his typical ways and controls Laura by sending her away with Olga. She is simply just a wife, an object and nothing more. I mean, what did she expect as he spent years looking for her and ended up kidnapping her.

Sure he was handsome but they were major red flags.

After being injected by Domenico, Olga has a heart to heart with Laura and Laura decides to explain her demands to live a proper life as opposed to being his prisoner. It’s absolutely wild that she’s like yeah we started off with me being kidnapped but I fell in love and she draws the line at not being able to do what she wants.

It’s here she meets Nacho, the dark and mysterious gardener with sick tats who turns up in a Justin Timberlake 2000’s fit. In a line which is no doubt the worst of the movie Laura says ‘You have nice cap’ which I am sure is as the kids say no cap.

Thus begins the start of the two identity mix ups of the movie as Nacho is in reality, the son of a rival crime boss. He reveals himself later and honestly I think the guy had been taking acting lessons from Johnny Sins.

Ask your man about him ladies, I know this is what you guys find enticing but us men, we love the master of disguise.

He was masquerading as a gardener all this time but he still found time to lay some seed and spend time in Laura’s garden when he abandoned the cover story. His father has tasked him with manipulating Laura so that he can install Massimo’s as yet unmentioned twin brother as the head of his gang due to Massimo expanding his empire aggressively.

She confesses how she is unhappy with just being a wife marking her ready for his deception plans but not before we see one of the most graphic sex scenes I think I have ever seen. It’s 50 shades of brown and the pillow talk reveals how Massimo has a brother and how Mario from the first movie has retired and gone back to his own planet.

Turns out that he and his brother had fallen out years prior and though evil twin plots became cliched in the 70s, here we are. We catch a glimpse of him as he starts his part of the rival crime bosses plan and he pretends to be Massimo coincidentally after an argument.

She catches what we think is Massimo absolutely railing Anna rotten but it was all a plan by Adriano. We learn he is bitter that his brother was born a few minutes before him meaning he was always looked over and has spent years seeking revenge.

Which…I can’t believe I said this story was better.

Not learning from the first movie, Laura decides to head off and live with the gardener she met for 5 minutes. She arrives at his luxurious beach home, not questioning how he can afford this on a gardener wage until she has been there a few days. 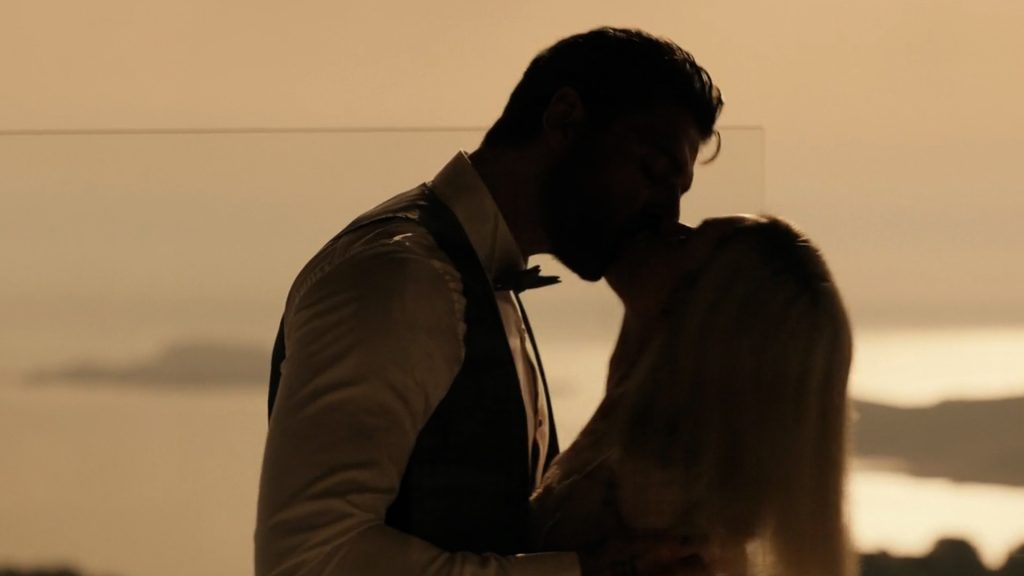 Laura ends up spending more time living the life of luxury and she even got to wear the cap she admired when she first met Nacho. Massimo and Nacho are of course very similar, fiercely loyal and infatuated with Laura.

Now Massimo deduces his ex, Anna is involved and he leaves his fancy lobster dinner. I like how his wife is missing and he’s like, aight imma head out for lobster. In one of the worst scenes in the movie, Massimo’s brother is told Laura isn’t where they thought and he kills a henchman, you know, to show how different the brothers are. They never actually properly introduce him before the end of the movie so you just think he’s gone unhinged and that we’re watching some episode of Moon Knight where everyone is really Poon Knight.

Nacho and Laura get even closer and she falls for him. In the creepiest scene of the movie, he kisses her when she’s asleep and he goes to town on her box before Massimo’s henchman arrives to bring Laura back. He is taken out by Nacho who had to be staring at the window to catch him and in response to Laura saying he killed the assailant, he says ‘unfortunately not’ What? I mean you could have killed him if you wanted…

Clearly the script writers had enough of the movie and wanted to chip off to the pub as they start to wrap it up.

At this point Nacho heads to visit his father as the movie cuts to a shot of his dad that feels overly dramatic.

Yes, I’m saying that about this moment and not the rest of the movie.

He reveals who he is as Laura ‘s like ‘oh bloody hell not again’ as she accidentally fell for a mafioso once more but he does care for her. She is taken to see his father and everything is laid bare in front of Massimo. He realises he has been cucked but I wonder if Laura will just call it an entanglement as Massimo prepares to go full Will Smith.

You never go full Will Smith.

He is implored to slow down his criminal expansion and if he doesn’t his twin brother replace him as head of the family. However Adriano has kidnapped her from Nacho’s father and the brother reveals himself to her with Nacho and Massimo going to save her in one almighty dramatic fashion. This is some Jacob and Edward team up to save Bella but Laura is shot after wriggling free from Adriano leading Anna to be shot as well and and then Massimo.

I don’t know why this was filmed in ultra mega slow motion either, no need really.

However Laura ran towards Massimo indicating she cared for him more, causing Nacho to walk away from them. It is ambiguous as to if she will survive or not but no doubt they’ll resurrect her cos without her there’s not much of a story.

Netflix have already confirmed a third film is in the works and that Laura will indeed be returning.

The third book synopsis has also been released and it does state that she’ll be back as a main focus of the storyline.

“As the wife of Don Massimo, one of the most dangerous Mafia bosses in Sicily, Laura’s life is a roller coaster.”
“She is often at risk, the potential target of Massimo’s unscrupulous enemies who will stop at nothing to destroy the powerful man. And when Laura is seriously injured in an attack, pregnant and fighting to survive, Massimo faces the toughest decision of his life.
“What will his life be without Laura? Will he be able to raise their child alone? What will the fate of his family be, and whose 365 days may come to a close?”
So it does seem like the baby that was thrown out with the bathwater plot line will return and that they might have to put a stop to the sex and focus on that. Potentially massimo will try to protect Laura and take her away from this life as he knows she’s gonna be in a lot of danger. Maybe he’ll even have a moment of self reflection where he realises that she’s a prisoner instead of a wife and he’ll finally let her go.
Overall there’s lots of things to look forward to I guess, and I’d love to hear your thoughts on the movie below. I’m not even gonna score it because Netflix will probably cut me off from press screeners but *cough* 3 out of 10 *cough* 3 out of 10 so yeah not giving a score but let me know yours below.